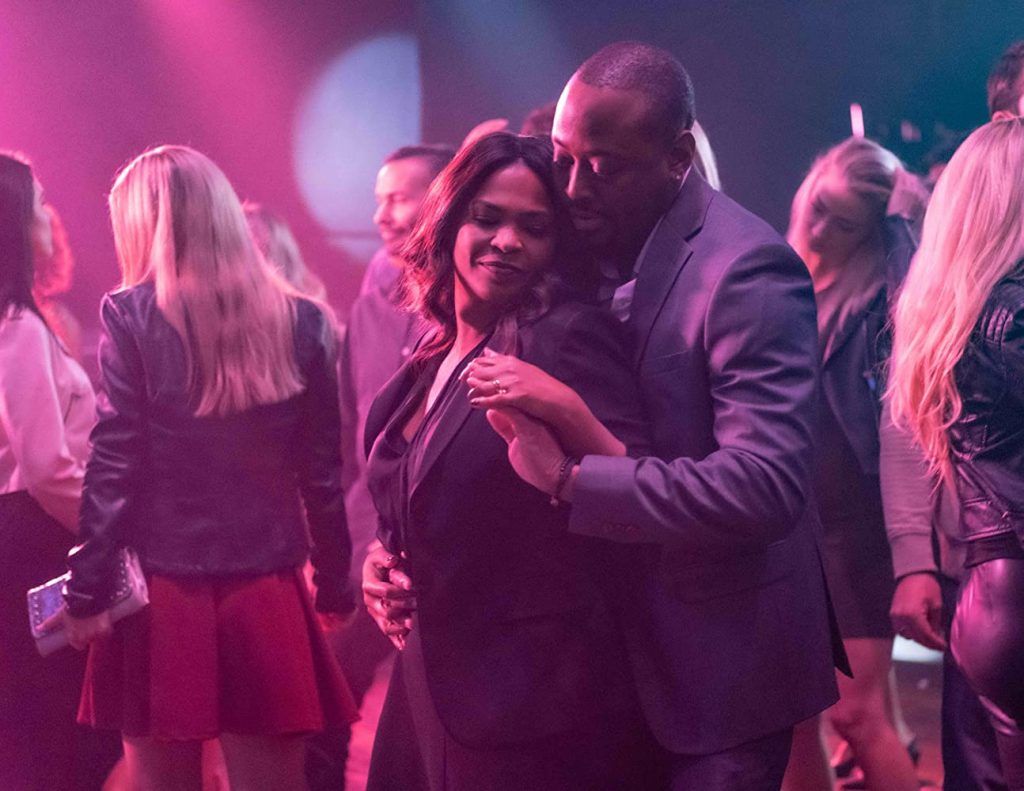 It’s easy to figure out the plot of “Fatal Affair” just by looking at its title. Netflix’s psycho-stalker thriller is the latest in a long line of films in the juicy genre. But apart from its largely Black cast, the tame outing does little to distinguish itself.

The aspiring potboiler plays like a glossy Lifetime movie. The paint-by-the-numbers entry knows what kind of film it is and stays inside its lane. Still, “Fatal Affairs” is entertaining enough, boosted by the performances of its overqualified stars.

Attorney Ellie Warren (Nia Long) is preparing to start a new chapter in her life. With her daughter Brittany (Aubrey Cleland) in college, Ellie and her husband, Marcus (Stephen Bishop), have moved into a luxurious beach house. The couple is working on their marriage after Marcus was injured in an accident. Ellie is also leaving her longtime workplace to start her own firm.

But for her last case, Ellie is reunited with an old friend, technology consultant David Hammond (Omar Epps). The two haven’t seen each other in 20 years. When Ellie and David decide to catch up over drinks, the night turns steamy. After Ellie confesses to David that her husband feels like a stranger, the two come close to giving into their passions. But a remorseful Ellie puts a stop to their encounter and goes home to her husband.

After being jilted, David starts calling, texting and following Ellie, worming himself into her life. With her family and friends in danger, Ellie starts digging into David’s mysterious past before his obsession with her becomes deadly.

“Fatal Affair” is a mostly straightforward, well, affair. Director Peter Sullivan, who has helmed several Lifetime thrillers and a slate of Hallmark Christmas movies, directs another outing that feels like it came from an assembly line. However, “Fatal Affair” falls short of being as salacious as it could have been. The “affair” in the title is an almost-affair. The raciest part of the film is its opening, which shows a couple in the throes of making love before a violent turn of events.

The predictable film checks off cliché after cliché. Ellie blocking David’s calls and texts? Check. David using Ellie’s best friend to get to her? Check. David following Ellie around in a dark ballcap, similar to master stalker Joe Goldberg in Netflix’s far more clever series “You”? Check. Ellie turning the tables on David and following him around? Check.

The screenplay does throw in some hints that David’s obsession may go back further than we know, including an indication he may have tried to interfere in Ellie’s life earlier. But the film doesn’t do anything with these interesting tidbits.

Despite its unoriginality, “Fatal Affair” knows how to ramp up the tension. The film is a breezy hour-and-a-half, which is the perfect amount of time for its well-worn concept. Although viewers almost certainly know what’s going to happen next, a lurking intruder in a house or outside in the bushes stirs suspense. Even a dropped cellphone with an incriminating video on it strums up a moment of anxiety. It’s enough to keep viewers in their seats.

The stalker thriller benefits from the talents of its experienced leads. I remember watching Long, whose varied film credits include “Boyz n the Hood,” the “Best Man” movies and “Big Momma’s House,” early in her career on “Guiding Light.” Her time on the soap opera serves her well here. As Ellie, Long comes across as sympathetic, portraying the character as a level-headed woman who lets her guard down in a moment of weakness. The actress finds the cracks in Ellie’s marriage and brings them to the surface as the reason for her near unfaithfulness.

Epps, whose long career spans TV shows including “ER” and “House,” to films including “Love & Basketball,” gets to have some fun here. He has the crazy-eyed look down when David “runs” into Ellie on the street, as well as a sly smile when he surprises her at her house for a dinner party. He’s also quite nimble making his way around a darkly lit home. I wish the actor had gone even more over-the-top in the role.

With “Fatal Affair,” what you see is what you get. The Netflix original doesn’t break the mold for the psycho-stalker genre, but rather comfortably conforms to it, with the bonus of Long and Epps lending their talents. It’s the kind of film you can put on while you’re doing stuff around the house and not miss a beat. Better films have been made in the genre, but so have a lot worse. 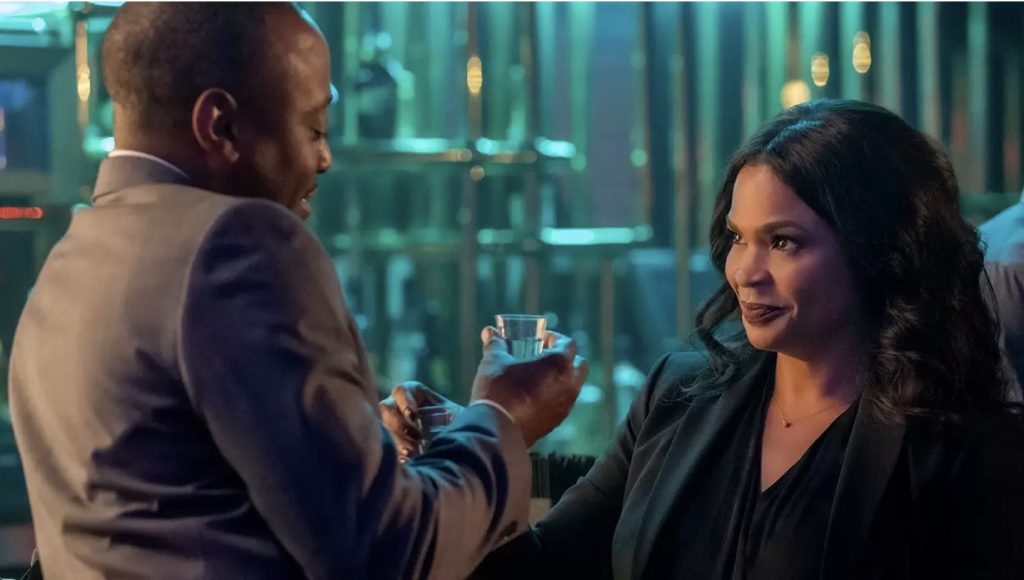 I had high hopes for Omar Epps’ career. His peak came when he played Eric Foreman in “House,” one of my favorite TV shows of all-time. He was also a capable replacement for Wesley Snipes as Willie Mays Hayes in 1994’s “Major League II,” and earned some notoriety for 2000’s “Love & Basketball.” However, after his “House” run, Epps hasn’t found another great project. And that’s the real theme of Netflix’s latest movie release “Fatal Affair.” Three actors who are better than their movie.

Nia Long, Stephen Bishop and Epps have done much better things and unfortunately, for whatever reason, they were stuck in the latest affair movie. I don’t usually watch any of them, but there’s a movie like this every year so there must be an audience. I know Bishop from “Moneyball” where he plays David Justice. He’s a solid character actor. I’ve seen a couple films Long has been in, but I don’t remember her. However, her credits are better than this movie.

I’ll give “Fatal Affair” credit for knowing what it wants to be, and that is a quick (1 hour, 29 minutes), easy-to-watch, Lifetime movie. I knew what I was getting from this film and it met my expectations. That doesn’t mean I liked it. I’ll fully admit my problems with it go beyond what this movie is trying to accomplish.

“Fatal Affair” sets up a relationship between Ellie (Long) and Marcus Warren (Bishop) the audience knows is bland after 20 years of marriage. However, it doesn’t show why it’s bland. It just let’s the audience assume, “Well they’ve been together for 20 years, it must be bland by now.” The movie instead shows why they’ve been together for 20 years. Long and Bishop have great chemistry and Marcus is shown as a loving and forgiving husband who is willing to work on their marriage. There’s just no setup as to why Ellie would cheat on Marcus. Do people need a reason to in reality? No. But a movie that establishes a bland relationship should show why it’s bland. Make the audience understand why the main character decides to cheat.

Second, the title of the film makes the audience believe there was an affair. At most, it’s a mistake one night that Ellie calls off mid act. A lapse in judgment. She went out with an old friend from college, David Hammond (Epps), and apparently he’s been obsessed with her since then.

Hammond begins to stalk Ellie, she finds out horrifying things about his past and our Lifetime movie is in full throttle. You know the rest.

On a side note, one part that annoyed me was Ellie’s supposed best friend not believing her. Hammond starts dating Ellie’s best friend Courtney (Maya Stojan) in order to get to Ellie. Hammond makes texts he sent to Ellie look like texts Ellie sent to him. Courtney immediately trusts this guy she just met over her best friend. Ellie also acts like the audience telling Courtney that he literally just said he was a hacker. I was shouting this at the screen.

The actors are overqualified for their jobs, which in turn gives the audience great chemistry between Long and Bishop. However, that works against the film as we’re wondering why Ellie would want to cheat on Marcus. The film could have benefited from a longer run time to develop the relationships and actually establish an affair. But I’m just asking for things that the movie isn’t trying to be. “Fatal Affair” is not for me, but there is an audience for these films. The best compliment I can give the film is that it is what it is. “Fatal Affair” doesn’t cheat on its premise. It gives the audience exactly what it sold. That also doesn’t mean it was good.