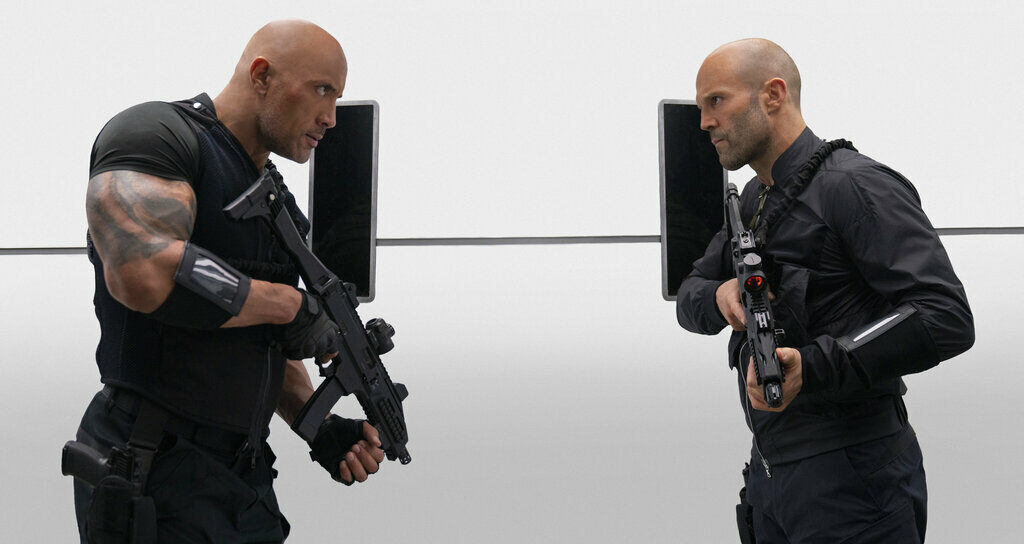 Since 2001, the “Fast & Furious” franchise has pushed the pedal to the metal to deliver flashy cars, psychics-defying action and a “family” of beloved characters over eight films. The adrenaline-charged franchise has expanded its horizons for the better, switching from the street-racing focus of earlier installments to spy-centered stories.

After 2011’s series-best “Fast Five” marked a turning point, the “Fast & Furious” films took a step back with 2017’s “Fate of the Furious.” The unusually dark and mediocre entry marked a rare misfire for the series, leaving some to wonder if the franchise still had enough gas left in its tank.

The answer is a resounding yes. “Fast & Furious Presents: Hobbs and Shaw,” the series’ first spinoff, puts the fun back into the franchise. The pulse-pounding actioner focuses on the two characters whose comedic chemistry was the best part of “Fate of the Furious” – Dwayne “The Rock” Johnson’s determined lawman Luke Hobbs and Jason Statham’s complicated outlaw Deckard Shaw. The dynamic duo heartily embrace the over-the-top action and campy humor that franchise fans love.

After going their separate ways after “Fate of the Furious,” bitter enemies Hobbs and Shaw reluctantly reunite to save the world from an emerging threat. The two team up with Shaw’s estranged sister, MI6 agent-turned-fugitive Hattie Shaw (Vanessa Kirby), to retrieve a deadly virus before it is unleashed.

Standing in the trio’s way are genetically altered terrorist Brixton Lore (Idris Elba) – who calls himself “Black Superman” because of his superhuman abilities – and his mysterious organization. With millions of lives on the line, Hobbs and Shaw must try to put their differences aside – as well as confront their own pasts – for the greater good.

Wildly entertaining, “Fast & Furious Presents: Hobbs and Shaw” gets a lot of mileage out of Johnson and Statham’s crackling camaraderie. The two action superstars were previously introduced in the franchise as antagonists – Hobbs in “Fast Five” and Shaw in 2013’s “Fast & Furious 6” – before switching over to the side of heist crew leader Dominic Toretto (Vin Diesel). Both strong but with different skillsets, the clashing pair’s gut-busting back-and-forth in “Fate of the Furious” left fans wanting more.

“Hobbs and Shaw” happily complies as Johnson and Statham revel in goading each other with laugh-out-loud insults, cheesy one-liners and silly pranks. In a scene on a plane, Hobbs and Shaw pull out the stops in smack-talking each other. During their action scenes, the two continually try to one-up the other. The spin-off is the funniest of the whole franchise.

The film lives up to the series’ reputation for eye-popping action and special effects. Director David Leitch, known for “John Wick,” “Atomic Blonde” and “Deadpool 2,” brings his signature sense of style to the larger-than-life set pieces. In one stunning sequence, Brixton holds Hattie over his shoulders while he seamlessly walks down the outside of a CIA building, as Hobbs and Shaw employ different methods of scaling its walls. Like any “Fast” flick, there’s a car chase that’ll have you holding your breath. The final showdown nixes guns completely, allowing its protagonists to up the ante and fight with old-school weaponry.

The theme of family drives the “Fast & Furious” films, and “Hobbs & Shaw” delves its main characters’ family connections. As Shaw and his sister Hattie bond again after being torn apart, the audience learns there’s more to Shaw than meets the eye. Hobbs embarks on his own journey of self-discovery when the trio return to his home, Samoa. He must face the family he left behind years earlier, including his resentful brother, Jonah (Cliff Curtis).

In addition to two of the most recognizable stars on the planet, “Hobbs and Shaw” boasts a capable cast. The formidable Kirby, who was a standout in last year’s “Mission Impossible: Fallout,” bolsters her action credentials as intelligent, agile and brave spy Hattie. She holds her own against the likes of the more experienced Johnson and Statham. Elba is having a blast as the devious Brixton, cementing his spot among the franchise’s best villains. Curtis gives a nicely understated performance as Hobbs’ brother. And moviegoers will have fun with some surprise celebrity cameos.

What brings down “Hobbs and Shaw” slightly is that at a runtime of two hours and 17 minutes, the film feels long. Some humorous bits, including a certain cameo, go on longer than necessary, and the third act is drawn out. The film could have benefited from some tighter editing and a length of closer to two hours.

“Fast & Furious Presents: Hobbs and Shaw” revs life back into the popular franchise. A welcome return to form after “Fate of the Furious,” the spinoff comes close to reaching the soaring heights of later installments such as “Fast & Furious 6” and 2015’s “Furious 7.” Here’s hoping the series lets Hobbs and Shaw take the wheel more often. 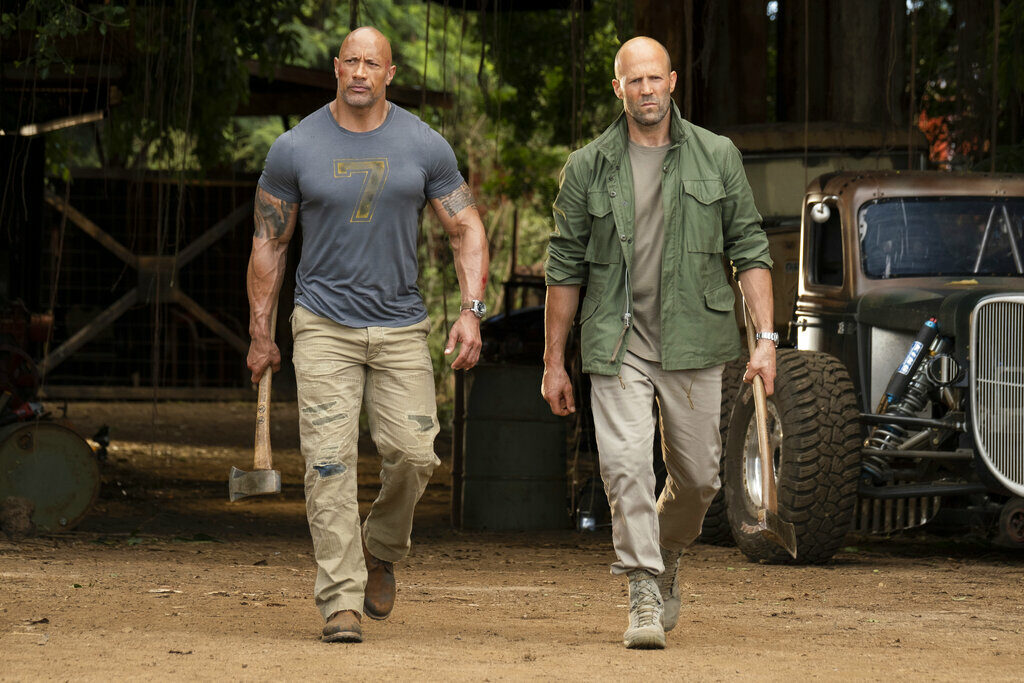 Universal made a smart play to back a spinoff while the “Fast & Furious” franchise is at its peak, especially with its leads. The spinoff plucked the two most charismatic actors in the franchise, Dwayne “The Rock” Johnson and Jason Statham, and made them the stars of “Hobbs and Shaw.”

To no surprise, their dynamic works well. Johnson (Lucas Hobbs) and Statham (Deckard Shaw) play off each other perfectly because of their natural charisma and groundwork the franchise set for their characters. Johnson’s Hobbs attacks with brute force, which is easy to deduce because of his build. The film used his size to create some fun sequences where it perfectly exaggerates what a human can do so the audience could get a good laugh. On the other hand, Statham’s Shaw has more of a finesse approach with a background in martial arts.

Their styles don’t mesh so putting them together works for the purpose of the film as the pair have to learn to co-exist with the fate of the world in the balance. They don’t like each other, which fuels the mostly fun banter.

Idris Elba, as Brixton Lore, adds more charisma and nails his role as the bad guy. He’s just overqualified for the job. There’s nothing wrong with his character, but when Elba is hired to play a role he should get more to do. It’s a testament to his acting talent. That being said, Elba fits with the film’s stars, makes the most of every scene and pushes the movie to another level. There was just another level to be had if his character was more than just the bad guy. A return for another movie would only help the character and the franchise, much like Johnson and Statham’s continued involvement.

Vanessa Kirby (“Mission Impossible: Fallout,” “The Crown”) did more than prove she belonged alongside these established and beloved actors. She even stole a few scenes as Shaw’s sister, Hattie Shaw. She gels with the cast as if she was part of the team from the start and masters the physicality of the role in her many action sequences.

Speaking of action, director David Leitch thrives in the genre again. He proved he could handle action on a more realistic scale with “John Wick” and “Atomic Blonde” as well as a superhero film in “Deadpool 2.” In “Hobbs and Shaw,” Leitch combines what he learned in those three films to create contained action sequences and scenes on a bigger scale. The finished product gives the audience sharp and fun action.

The movie suffers from its 2-hour, 18-minute runtime. “Hobbs and Shaw” forces two popular actors into the film and it almost seemed as if the filmmakers said, “Well, we have them. Let’s give them more scenes.” Cameos turned into roles and unnecessary scenes during and after the credits. One scene on an airplane is set up just to reveal one of these actors. It at least feels that way as Hobbs and Shaw banter again, repeating a lot of the same points made earlier in the film. It can be cut, along with a few other moments to get the film down to at least two hours.

This is a franchise that often thrives on its absurdity and adding more and more to each film, so taking the risk of adding even more charismatic actors makes sense. It just didn’t work.

Ultimately, “Hobbs and Shaw” accomplished what it set out to do. Ever since the franchise reached its full potential in “Fast Five” the films have been about fun. Whether cars are pulling a massive safe at high speeds through a crowded city or flying from skyscraper to skyscraper, the audience is in the theater to have a blast with a bunch of characters it enjoys.

“Fate of the Furious” went a little too dark, but “Hobbs and Shaw” recaptured the franchise’s magic, building the love of the characters, adding some intriguing new ones and creating the right amount of over-the-top action sequences.

At the same time, “Hobbs and Shaw” stands on its own. The film left an opening to make more spinoff movies with Johnson and Statham. They are too good together to stop here.