The action-comedy “Coffee & Kareem” is a head-scratching mess of a film. The raunchy, profane and violent Netflix original pairs together a bungling cop with a 12-year-old street-smart kid. The buddy-cop film is geared toward kids, yet its crass humor is completely inappropriate for children. But as offensive as the film tries to be, its most offensive crime is how unfunny it is.

Detroit police officer James Coffee (Ed Helms) is dating Vanessa (Taraji P. Henson) and trying to build a relationship with her son, the tough-talking, foul-mouthed Kareem (Terrence Little Gardenhigh). But Kareem, who dreams of becoming a rapper, doesn’t want his mom dating a cop. The adolescent hires a drug dealer (RonReaco Lee) – who escaped from Coffee’s custody – to break up the couple.

Kareem’s plan quickly goes haywire, putting him and his family in jeopardy. The reluctant young man must team up with Coffee as they stumble upon a vast criminal conspiracy. Treated as the department’s scapegoat, Coffee has a chance to prove himself and try to win over Kareem as the two work together to protect Vanessa.

“Coffee & Kareem” mines a few laughs here and there. But the crude film is so intent on clinging to its R rating that it sacrifices humor for shock value. During its scant 88-minute runtime, the flick hurls as many homophobic and pedophile jokes as it can. Some of these are uttered by Kareem, who lies that Coffee attempted to molest him in order to convince the drug dealer to help him. How is that funny, exactly?

Yet, the movie clearly wants us to root for Coffee and Kareem. Usually in a buddy-cop film, viewers want the mismatched pair to work out their differences and get the bad guy. But I didn’t feel that way when I was watching “Coffee & Kareem.”

The dynamic between Helms and Gardenhigh is lacking. Helms, an alum from “The Office,” is good here, able to find humor through his character’s exasperation. As the well-meaning Coffee, Helms is sympathetic. But Gardenhigh comes across as annoying, portraying Kareem as an underage bully. Kareem tears down Coffee at every opportunity. The movie uses this to build up Coffee’s ability to stand up for himself and the family he wants, but it’s a bad message. I didn’t buy Coffee and Kareem’s relationship, which the film conveniently ties up at the film’s end.

The movie places its child star in inappropriate situations, hoping it’ll be enough to entertain the audience. But the film’s lewdness works against its kid factor. Throughout the movie, Gardenhigh drops F-bombs, rattles off graphic insults and yells sexually laced threats. The film revels in Kareem’s bad behavior. Henson gets the worst of the deal, as her character ends up being Tasered by her own son. This is not a film that parents and kids can watch together. Otherwise, moms and dads will have a lot of explaining to do.

The few bright spots of “Coffee & Kareem” occur in the second half. The film includes a few well-shot action sequences, including a shootout at a strip club and an explosive finale. The movie’s funniest scene involves a roundabout. Anyone who’s navigated the confusing roundabout near the Wilkes-Barre/Scranton airport should get a laugh out of this.

The actioner also features some highlights in its supporting cast. As Coffee’s nemesis on the police force, Betty Gilpin shines as the over-the-top detective. It’s nice to see David Alan Grier pop up, but he doesn’t have a lot to do in his short amount of screen time.

Absolutely awful, “Coffee & Kareem” is a bizarre mashup that fails as both a buddy-cop movie and a kids’ film. The ill-conceived film tries to offend its audience. Instead, it ends up being offensively bad. 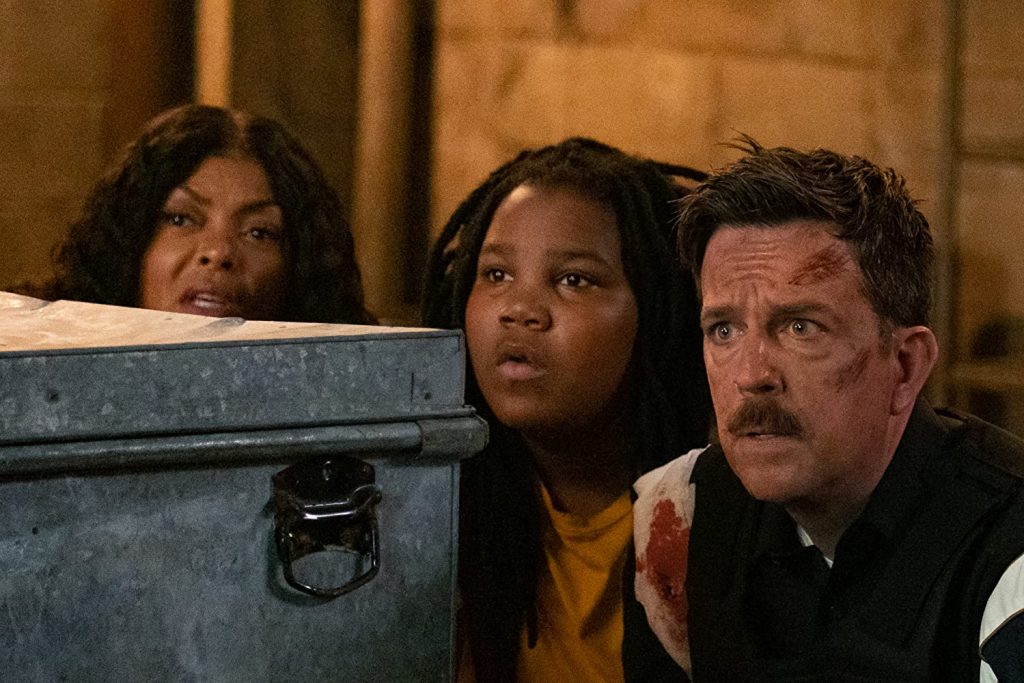 In a time when going to the theater is not an option, we’ve delved into the Netflix movie library more to try to find new releases so the Take 2 Blog doesn’t miss a beat. The next Netflix release was called “Coffee & Kareem.” I figured this would be perfect. It’s a Friday release and we could turn our reviews around for Monday and people will know whether to give it a shot. I knew nothing about this movie except that Ed Helms was in it. I didn’t see a trailer. I didn’t read a plot summary. I just saw that it was the next movie. I thought it would be bad based on the title, “Coffee & Kareem.” The 13% score on Rotten Tomatoes made me feel bad for suggesting it. Needless to say, I had very low expectations. It may have barely cleared the bar.

There’s no getting around it. The first half of “Coffee & Kareem” is awful. I would have turned it off had I not been reviewing it. It’s difficult to get a grasp on what this movie is and who it is for.

At no point does it make any sense Helms (Coffee) is the love interest of Taraji P. Henson (Vanessa Manning). Terrence Little Gardenhigh as Kareem is just offensive and completely unlikable. The movie also uses offensive language for the sake of using offensive language. It’s supposed to be played for humor and maybe the audience’s shock value that Kareem, a 12-year-old, is using it. Nobody was laughing.

“Coffee & Kareem” plays like a combination of “Good Boys” and “The Other Guys” if both of those movies were bad. The tone is just so strange. It doesn’t feel like an R-rated film as it’s very lighthearted. Then all of a sudden there’s a sex scene or Coffee takes Kareem (again, 12 years old) to a strip club. Then there’s random, absurd violence and lots and lots of cursing for the purpose of saying the words. My guess is they were going for a “Good Boys” feel as the kids in that film are very vulgar. However, “Good Boys” has a heart and innocence to it that makes sense. This seemed like a film that on the surface thought, “They had kids curse and it worked so let’s do that,” while failing to realize there was more to that critically acclaimed film.

Helms only works for me in a supporting role. I don’t love him as a leading man. I don’t find his shtick that funny in large doses. This is much of the same. He plays that same Helms character he portrays in “The Hangover” and “The Office.” It worked more so in those projects because he was a supporting character.

Henson is completely underutilized and I feel bad that she has to associate herself with this film. She is an Oscar nominee and a Golden Globe winner and she doesn’t have a prominent role in the movie. Honestly, there’s a lot of talent in the film I hope I see elsewhere. Gardenhigh seems like a young and promising actor. Betty Gilpin (Detective Watts), RonReaco Lee (Orlando Johnson) and Andrew Bachelor (Rodney) aka King Bach, who I only knew from Instagram before this, all made me laugh in spite of the poor script.

“Coffee & Kareem” started to find itself in the second half of the film. Well, it started to find some semblance of a cohesive movie. When it abandoned its odd need for raunchy and offensive language and created jokes that fit the tone of the film, which should not have been rated R, “Coffee & Kareem” had me intermittently engaged. That’s where the film could have been watchable. A softer film with good humor.

“Coffee & Kareem” is a mess that wastes talented actors. It is raunchy for the sake of being raunchy and offensive for the shock value of a kid using offensive language. When it starts to figure out the kind of movie it should have been, it is far too late.