A blend of classic filmmaking and new, “An American Pickle” is a sweet and charming look at the American Dream and how it’s changed – or hasn’t changed – over time. Seth Rogen’s excellent dual performance as a Jewish immigrant and his lookalike descendant anchors the first original film for the HBO Max streaming service.

With its refreshing premise, the time-shifting comedy starts out endearing. But the heart-warming film turns tart as it moves from family bonding to family in-fighting. “An American Pickle” takes on a little more than it can chew, attempting to tackle political allegories in addition to grief and religion.

The film starts off in 1918 as struggling ditch digger Herschel Greenbaum (Rogen) tries to make a living in the fictional Eastern European country of Schlupsk. Dreaming of a better life, the determined Herschel and his wife, Sarah (Sarah Snook), emigrate to the United States, hoping to find prosperity for their family. When Herschel gets a job at a pickle factory, his dreams are put on hold when he falls into a vat of brine. The immigrant isn’t discovered until 100 years later, perfectly preserved and thrust into a modern world he doesn’t recognize.

Herschel meets his last remaining relative, his great-grandson Ben (Rogen), an aspiring app developer living in Brooklyn. As the two Greenbaums attempt to forge their own paths and achieve success, old and new resentments threaten to drive them apart.

With its impressive filmmaking, “An American Pickle” marks the promising feature film debut of director Brandon Trost, a cinematographer who has worked with Rogen on many of the funnyman’s films. The movie looks great, having been shot in two different aspect ratios to separate the past action from the present.

The early 20th century scenes are filmed in a square, 1.1 aspect ratio, seeped in sepia tones. The flickering and grainy look reminds me of the silent films I grew up watching on AMC and TCM. Even the way Rogen and Snook are filmed – centered in camera-facing shots that switch back and forth between the actors – captures the feel of classic films. Then the aspect ratio switches to 16.9, moving the action into the modern day as Herschel is brought into the 21st century.

As its story meshes the past and present, “An American Pickle” is a perfect showcase for the gruff yet goofy Rogen. The likable comedian carries the film on his shoulders as the driven Herschel comes face-to-face with his slacker grandson. Rogen makes each man distinctive enough to flesh out two wholly separate characters, alternating between hero and villain for each Greenbaum. It’s a brilliant dual performance.

The earnest comedy works the best when the two Rogens are getting along. The first act highlights the delightful camaraderie between the two Greenbaums, playing up the fish-out-of-water aspect of Herschel’s story. Ben guides Herschel in the ways of modern life, introducing the hardened worker to the joys of seltzer water and Alexa, garnering laughs along the way.

But the tables turn when Herschel discovers the run-down state of the cemetery where his beloved Sarah is buried. As Herschel, the resilient immigrant is used to taking matters into his own hands. But the reluctant Ben, who is still mourning the death of his parents, shuns his great-grandfather’s religion and call to action. The underachiever, who has dreams of starting his own company, has taken the last five years to perfect his app, with little to show for it.

When the two turn on each other, the movie takes a dark turn, losing its way. As Herschel sets out to start his own pickle empire, he does so with the intent of making Ben look bad for failing to live up to his own potential. But Ben knows Herschel’s outdated and offensive beliefs were preserved along with him, and he knows how to prod his ancestor’s ego. As the two sabotage each other, it means less screen time between the two Rogens and a meaner film. I would have preferred to see Herschel and Ben work together and address their conflicts instead of them tearing each other apart.

The film comes together in a satisfying manner in the end. Both Greenbaums want the same thing: to achieve the American Dream, which makes them more alike than they think. But during its brisk hour-and-a-half runtime, the overstuffed flick takes a lot of detours to get there.

“An American Pickle” deftly deals with grief and the place of religion in doing so, which would have been enough to carry the story along. But then the film also tries to tackle a President Donald Trump allegory, with Herschel’s inflammatory comments about Christians and women stirring protests. It’s a lot to take on for a film already dealing with heavy topics.

The comedy is centered around the Greenbaum men, so there’s little emphasis on other characters. But Snook makes the most of her limited screen time as the tough yet hopeful Sarah, the family’s matriarch, with her presence felt throughout the modern scenes.

In “An American Pickle,” two Seth Rogens are indeed better than one. The funnyman’s talents lift the enjoyable comedy, serving up a solid first effort from HBO Max. However, the film struggles to juggle all its plates, leaving a bitter taste at times. Ultimately though, “An American Pickle” succeeds as a tale about the importance of family and preserving one’s own legacy. 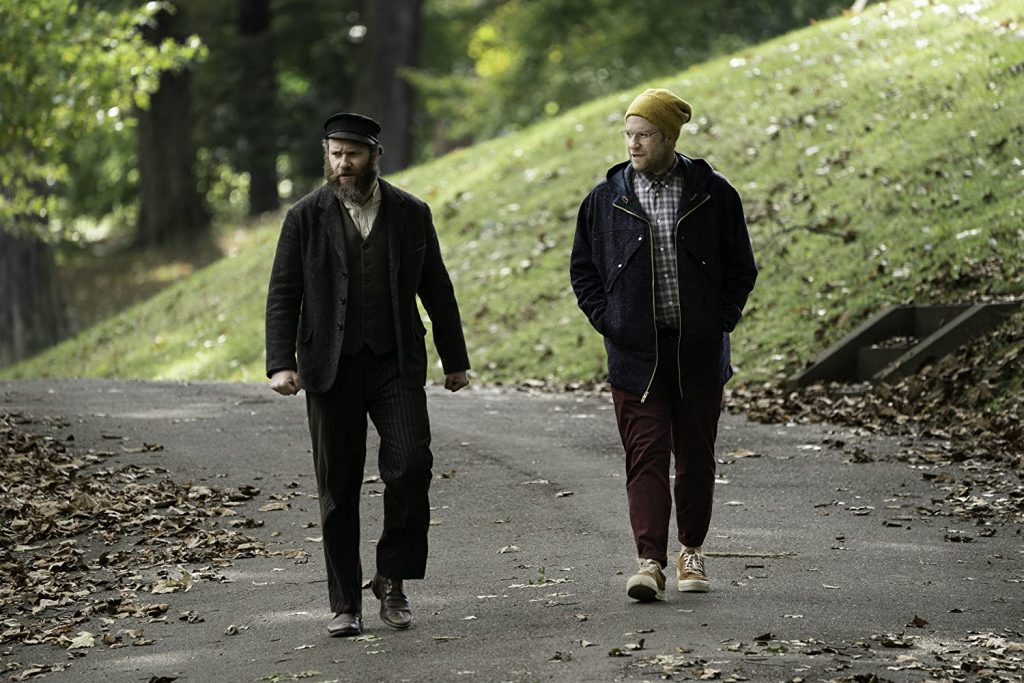 As the release date of HBO Max neared, the marketing didn’t do much to entice me to subscribe to the streaming service. So the Snyder cut of “Justice League” will be released on the platform in 2021 … big whoop. Little did I know when it was released I already had it because if you have an HBO subscription, you have HBO Max. Rebecca and I used it for the first time this week. After I almost just watched “La La Land” instead, “An American Pickle” became the first HBO Max original film I watched.

Starring Seth Rogen as Herschel and Ben Greenbaum, the former is preserved in pickle brine for 100 years and finds out he has a great-grandson Ben in modern day. The two start to bond as Ben introduces him to the new world. However, when Herschel pushes Ben to confront his past, a rift forms between them.

Rogen is the clear bright spot of the film. I’ve thoroughly enjoyed his career and I’m always excited to see what he can come up with next, whether he’s acting, writing, directing, producing or creating. He shines again as he portrays two characters from two eras. He does so well with the roles that Herschel and Ben feel like two different people, even though we know they’re played by the same actor. It’s not just the voice acting. Rogen also nails the posture and facial expressions of both characters.

He’s the best part of the film. Everything thing else could have benefited from a little more time. “An American Pickle” is 88 minutes long, and it could have used about a half hour more. Most of the film is taken up by Herschel and Ben undermining each other, and viewers are left waiting for the payoff. The things they do to each other are unforgivable. These lead characters rapidly become unlikable.

There isn’t much time spent on the two getting along and becoming a family and that’s when the film really thrives. The movie has an unexpected heart to it, but it doesn’t have much time to develop it. The humor is there, but the rest is only almost there. The film gives the audience some of a social commentary, but doesn’t have the time to completely go for it.

“An American Pickle” makes me think twice about overlooking HBO Max as it showed it could create a quality film with a great dual performance. With a little more time, the film could have made the leads more likable, delved deeper into the movie’s heart and expanded its social commentary.