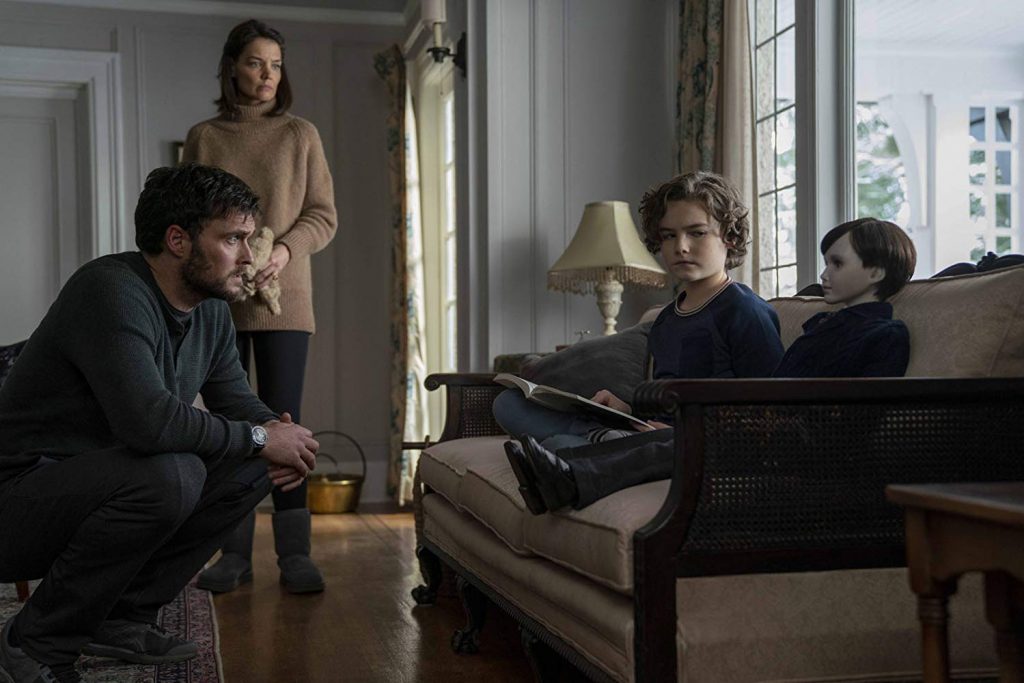 During the first few months of the year, the dead of winter is traditionally the dumping ground for lackluster horror films. Remember “The Boy”? The creepy doll flick about the life-like, porcelain plaything Brahms bowed in January 2016. Middling at best, the atmospheric film is probably best known for its crazy third-act twist.

Did anyone want a “Boy” sequel? Well, four years later, that’s exactly what we get with “Brahms: The Boy II.” Released in the doldrums of February, the watchable but baffling sequel tries to retcon the first movie. As a result, the conflicted film ends up being worse than its predecessor, spurring more questions than answers for the mediocre franchise.

After a harrowing home invasion, Liza (Katie Holmes), her husband Sean (Owain Yeoman) and their young son Jude (Christopher Convery) leave their London flat for a house in the British countryside. A traumatized Jude – who has stopped speaking since the incident – stumbles across a doll buried in the woods. It’s Brahms, looking remarkably well for a doll that was *spoiler* smashed to pieces in the first film. 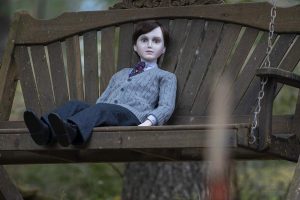 Even Brahms needs to chill once in a while.

When Jude bonds with the doll, his parents decide to let him keep the frightful figure. But Liza grows increasingly concerned when strange things start happening to the family. Through written notes, Jude insists his parents must follow a series of rules regarding Brahms – and if they don’t, Brahms will get angry. As Jude and Brahms become inseparable, Liza is driven to protect her family and solve the mystery surrounding her son’s best friend.

When “The Boy” was released, the tepidly received film racked up $64 million at the worldwide box office on a budget of only $10 million. It’s understandable the filmmakers would want to cash in on a sequel. But the follow-up tries to accomplish this by practically casting aside the first film.

I actually liked the first half of “The Boy,” which coasted along on Brahms’ creepiness and its isolated setting. The original created suspense during its first two acts by setting up the doll as being possessed. But when the big twist was revealed in the final act, the rest of the movie didn’t make sense, and I chalked it up as a disappointment. I’m not alone: “The Boy” has a rotten audience score of 38% on Rotten Tomatoes.

However, “Brahms: The Boy II” suffers from an identity crisis. The film tries to have its cake and eat it, too. The sequel insists the events of the first film did happen, peppering in flashbacks and montages from the original. But the polarizing twist is thrown out as the sequel fully embraces the supernatural angle that its predecessor rejected. Moviegoers will find themselves asking how the two films can exist in the same universe when they so blatantly disregard each other.

The film grows even more frustrating as yet another twist emerges in the finale. The reveal makes viewers question not only everything that came before it in the sequel, but the entirety of the first film, too. I kept asking, “But how? But why?!” It’s a bizarre move as “The Boy II” brings back the same director, William Brent Bell, and writer, Stacey Menear, to basically undo their work from the original.

It’s not alarming at all when your son starts to dress like his creepy doll. Brahms, left, and Christopher Convery star in “Brahms: The Boy 2.”

However, the head-scratching film does have a few things going for it. Like the original, the sequel makes the most of its star prop. The film knows how unsettling Brahms is, with his milky skin and piercing eyes. Several scenes focus on the doll by himself – and now, he moves! – lingering just long enough to unnerve the viewer. The well-shot finale balances light and shadows, highlighting the shock of its reveal.

“The Boy II” does a good job of creating a tense atmosphere as Brahms’ presence threatens to disrupt the family in their close confines. This is a horror film, so there are some standard jump scares. But it relies a little too much on dream sequences, which feel repetitious.

The performances are solid across the board. The fantastic Holmes, known for “Dawson’s Creek” and “Batman Begins,” grounds the film as a mother trying to deal with her own trauma and that of her son. It’s nice to see the actress back on the big screen. As Jude, Convery is both sweet and sinister as the boy falls further under Brahms’ influence. Ralph Ineson (“The Witch”) adds to his horror credentials as a mysterious groundskeeper who keeps to himself.

By trying to undo its so-so predecessor, “Brahms: The Boy II” pushes the franchise further into mediocrity. Maybe it’s a lot to ask to expect logic from a horror franchise centered around a maybe-possessed doll. But it’s clear the filmmakers are the ones lacking control over their own creation.