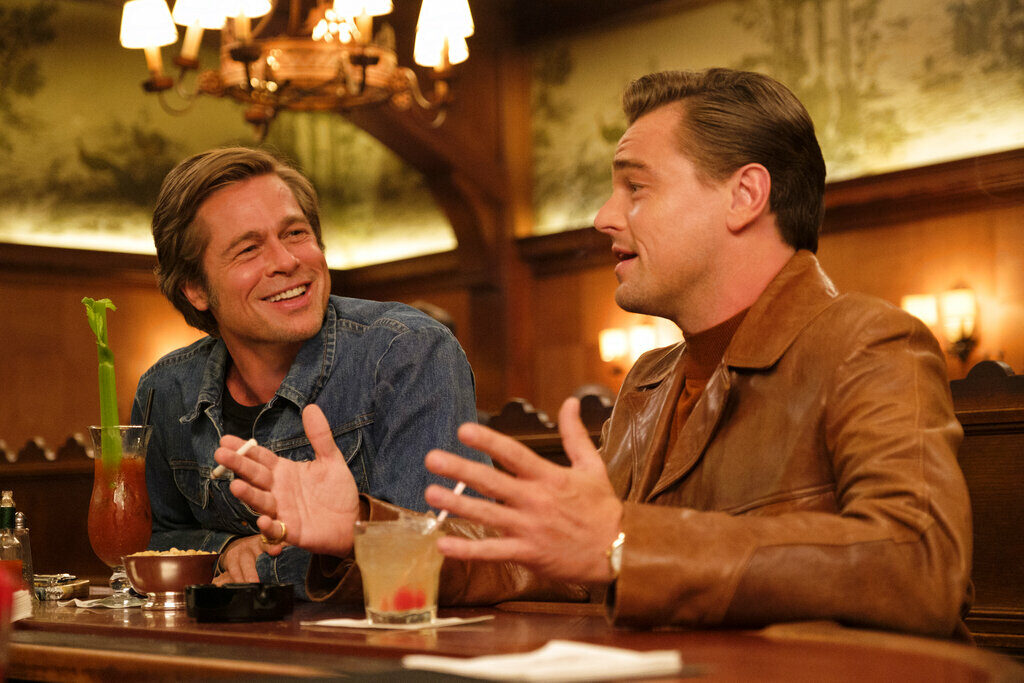 Review: “Once Upon a Time … in Hollywood”

When Quentin Tarantino puts his name on a film, it carries a certain weight of expectation. It’ll have great performances, an award-caliber script and grotesque violence. Even the average moviegoer knows what Tarantino brings to the table.

“Once Upon a Time … in Hollywood,” however, created many questions during its production.

It would take place in 1969 Hollywood around the time of the Manson murders, but fictional characters Rick Dalton (Leonardo DiCaprio), a once prominent actor on the downturn, and Cliff Booth (Brad Pitt), Dalton’s stuntman, would serve as the film’s leads. However, Margot Robbie would portray Sharon Tate, a real-life actress and victim of the Manson murders.

What would this movie be about?

That’s part of the fun as Tarantino explores Hollywood in the late 1960s and provides a interesting story that keeps audiences on the edge of their seats.

DiCaprio’s performance as Dalton shines brightest on the ninth Tarantino flick as the Oscar winner plays a role the viewer isn’t used to — an actor on the decline. He has to achieve the character’s humor, vulnerability and acting talent, which he displays in a few cool scenes where he films a pilot within the movie.

Pitt’s dynamic with DiCaprio felt natural and made the audience care for their friendship. Whenever they shared the screen, “Once Upon a Time … in Hollywood” was in a great place.

One of the complaints offered by critics was the limited dialogue of Robbie’s Sharon Tate. But more dialogue wasn’t necessary as Robbie said a lot without speaking. She adds another solid performance to her young career.

The movie also boasts a lot of fun cameos.

Tarantino captures the time period very well, with a catchy soundtrack, beautiful shots of Los Angeles and plenty of nods to that age.

The acclaimed writer and director is also known for creating masterful sequences that stick with the viewer, such as the torture scene in “Reservoir Dogs,” the Ezekiel 25:17 speech in “Pulp Fiction” and the opening of “Inglourious Basterds.” He adds some more to his collection in “Once Upon a Time … in Hollywood.”

Unfortunately, other things that find their way into Tarantino films are bare feet. He heard the criticism and accusations of his foot fetish and decided he’d double down. Twice women’s bare feet sat aggressively in the middle of the shot, which means he did it on purpose. Whether Tarantino did it because he’s pretentious or he really has a foot fetish, he ruined multiple shots. And critics should reserve the right to deduct from their final scores because of feet.

The story was strong, but not among Tarantino’s best. It’s difficult to explain, but it lacked. It wasn’t his best work, but it was still better than a lot of other writers. The screenplay will probably earn an Oscar nomination. However, upon leaving the theater, the performances and entertainment value stood out, as the film flies through its two-hour, 41-minute runtime.

“Once Upon a Time … in Hollywood” stands among the most fun Tarantino films with its humor and a bit of an engaging mystery to where the movie will go. The acclaimed writer and director still gives the audience what it came for, but it doesn’t stand among his best films.

A decent Tarantino film will still prove among the best of the year. However, before the credits rolled during “Inglourious Basterds,” Brad Pitt’s Aldo Raine said, “This might be my masterpiece.” “Once Upon a Time … in Hollywood” couldn’t make that claim.

Margot Robbie in Quentin Tarantino’s “Once Upon a Time in Hollywood.” (Andrew Cooper/Sony-Columbia Pictures via AP)

Quentin Tarantino pours his love of cinema into his ninth film, “Once Upon a Time … in Hollywood.” The director’s ode to the last days of Hollywood’s Golden Age faithfully recreates a bygone era and features dynamic performances from an A-list cast.

Although the film dazzles with its attention to period detail and roster of stars, its parts do not add up to a solid whole. Plodding and meandering, “Once Upon a Time … in Hollywood” is one of Tarantino’s weaker efforts, failing to justify its nearly three-hour runtime.

Set in 1969, the film blends fictional characters and real-life events, following three main leads over an interlocking story. Has-been TV actor Rick Dalton (Leonardo DiCaprio), who once hit it big in 1950s Westerns, and his loyal stunt double Cliff Booth (Brad Pitt) are trying to break into the film industry. While Rick’s star is fading, that of his Hollywood Hills neighbor, real-life actress Sharon Tate (Margot Robbie), is on the rise.

When Rick lands a job on another TV Western, Cliff takes care of odd jobs around Rick’s mansion. But circling the two friends are a commune of hippies led by cult leader Charles Manson. The fates of Rick, Cliff and Sharon are destined to collide as their search for fame and fortune takes an unexpected path.

With its impeccable production design, Tarantino’s latest film transports moviegoers back to the swinging ’60s. The restored Hollywood facades, shaggy hairstyles and Sharon’s white go-go boots recreate a decade lost in time. The distinctive period soundtrack is punctuated with lesser-known tunes from the era, echoing its main characters’ search for stardom. Paul Revere and the Raiders’ songs “Good Thing” and “Hungry” play from a record player, and the strains of Los Bravos’ breezy “Bring a Little Lovin’” are blasted over a car radio.

The excellent DiCaprio leads the cast as the hard-drinking TV cowboy looking to reignite his career. As the desperate Dalton, DiCaprio walks a fine line between intense and over-the-top. After messing up a line on set, DiCaprio delivers a riveting monologue that shows the lengths of Rick’s passion. In these scenes, Tarantino pays loving homage to the spaghetti western, lifting the curtain behind the filmmaking.

DiCaprio and Pitt have great chemistry as their characters’ friendship forms the heart of the film. As Cliff, the charismatic Pitt is easygoing and funny, landing a lot of the film’s laughs. The talented actor capably tackles a major plotline in the second act.

Audiences know Sharon Tate as the tragic victim of the Manson family murders. Though she doesn’t have many lines, Robbie imbues the character with warmth. She portrays Sharon as a real person and more than a victim. While treating Sharon’s memory with respect, Tarantino uses that knowledge to play with audience expectations as the film draws to its dramatic third act.

However, getting to the final act proves to be a real chore. At two hours and 41 minutes long, “Once Upon a Time … in Hollywood” often feels boring. The film is slow-moving and loosely structured, especially in its first two acts. The story meanders a lot, making viewers wonder where the movie is going.

The film lacks the snappy dialogue of other Tarantino films, such as “The Hateful Eight,” and the flashy thrills of a roller coaster ride like “Kill Bill: Vol. 1.” The director overdoes shots of the backs of characters’ heads in cars. There’s also closeups of feet – whether they’re walking, perched on theater seats or on car dashboards. Quentin, we get that you like feet!

Tarantino’s trademark violence emerges later in the story, along with some surprises. In the final act, the movie takes a hard right from realism into absurdity. But the ultimate destination may not be worth the journey, leaving moviegoers wanting more of a payoff.

Ambitious and a bit overindulgent, “Once Upon a Time … in Hollywood” fades to black as an underwhelming effort in Tarantino’s later output of films.