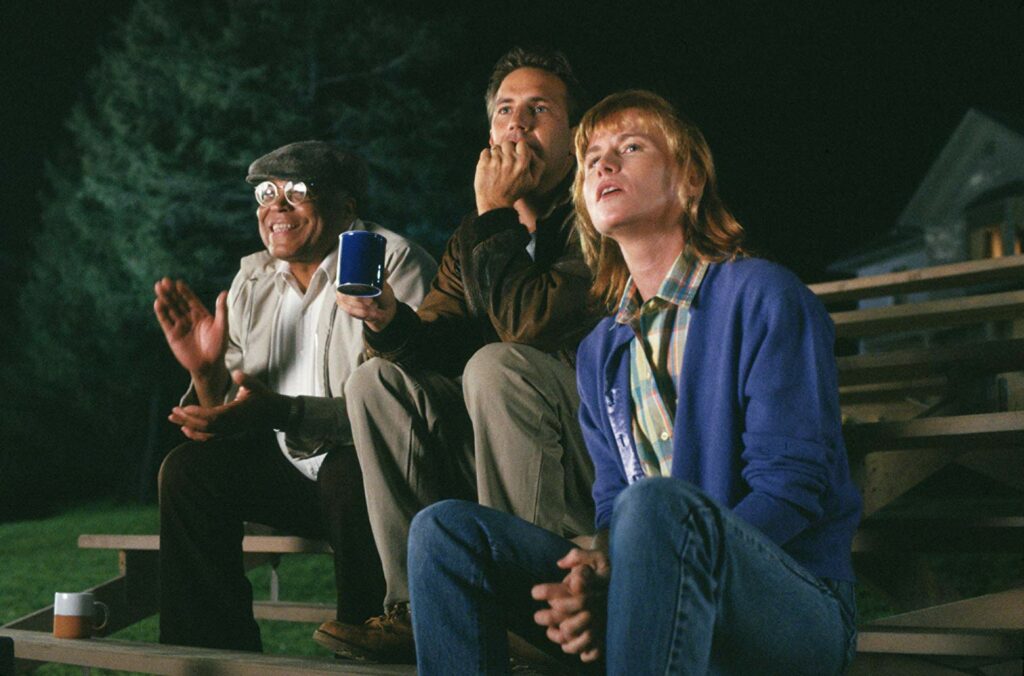 In 1989, “Field of Dreams” hit the big screen to critical and commercial success. At the 1990 Oscars, it earned nominations for best picture, best original score and best adapted screenplay. This year, it celebrates its 30th anniversary. The flick still resonates, especially in my family. It’s my father’s favorite movie so my sister and I took him to see it in theaters on Father’s Day. Watching the film 30 years later and on the big screen only deepened my love for the film.

In early July, the Scranton/Wilkes-Barre RailRiders held a “Field of Dreams” night at PNC Field where the team wore uniforms inspired by the 1919 Chicago White Sox and the actor who played John Kinsella (Dwier Brown) made an appearance. That night, my friend and colleague RailRiders beat writer Conor Foley put up a Twitter poll asking where “Field of Dreams” falls among the best baseball movies of all-time. I voted immediately. No. 1. The best.

When he came back to The Times-Tribune newsroom later that night, I wouldn’t even entertain a conversation about what baseball movie could possibly top “Field of Dreams.” I probably should have, since most of the best sports movies center on baseball. But as fast as my colleagues would bring up another baseball movie to contend with “Field of Dreams” is how fast I shot that film down. “Bull Durham?” Nope. “The Natural?” Nope. “Major League?” Nope. “A League of Their Own?” Nope. “Moneyball?” Nope.

So I took some time to think about it. This is why “Field of Dreams” continues to amaze me decades later: 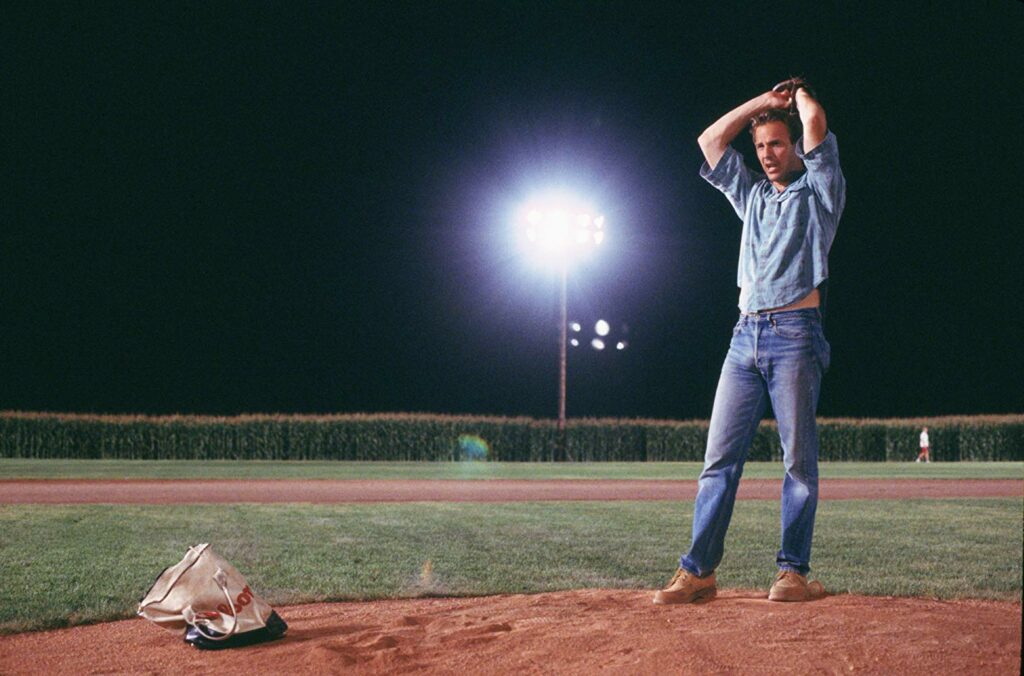 Kevin Costner has best picture and best director wins at the Academy Awards for “Dances with Wolves” and a best actor nomination for the same film. But his legacy will always lie in the sports genre, where Costner is the greatest of all-time. He’s acted in more than one sports movie in three decades. Costner portrayed cyclist Marcus Sommers in “American Flyers” (1985) before back-to-back baseball films when he played Crash Davis in “Bull Durham” (1988) and Ray Kinsella in “Field of Dreams” (1989). He played golf pro Roy McAvoy in “Tin Cup” (1996) before completing the baseball movie hat trick as Billy Chapel in “For the Love of the Game” (1999). Costner took a 15-year break from the genre before returning as Browns GM Sonny Weaver Jr. in “Draft Day” (2014) and high school cross country coach Jim White in “McFarland, USA” (2015).

And it’s not just that he signs up for so many sports films. The movies for the most part are really good, even a few classics. If there were a title for greatest sports movie actor of all-time, Costner would still hold the belt. 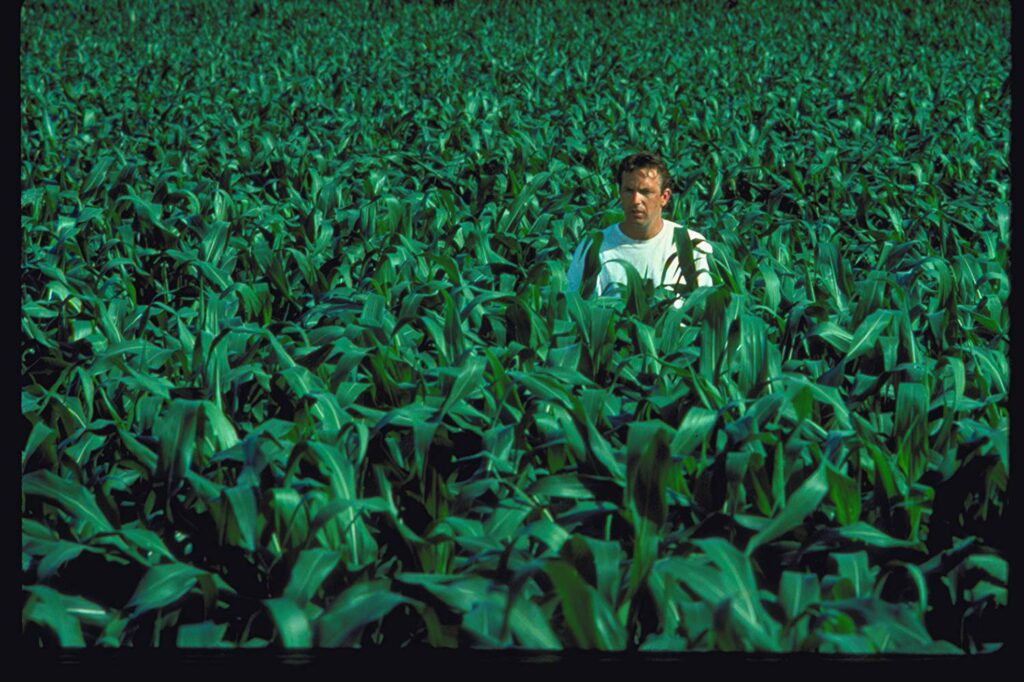 The late James Horner has 10 Oscars nominations, including wins for best original song (“My Heart Will Go On”) and best original score (Titanic). One of his nominations came from his phenomenal work in “Field of Dreams.” He captures the emotion of every scene and sends chills up the audience’s spines, not so much to build fear but the mystique of the world. The score adds so much to the film, especially in the theater, as it transports the audience into the world. 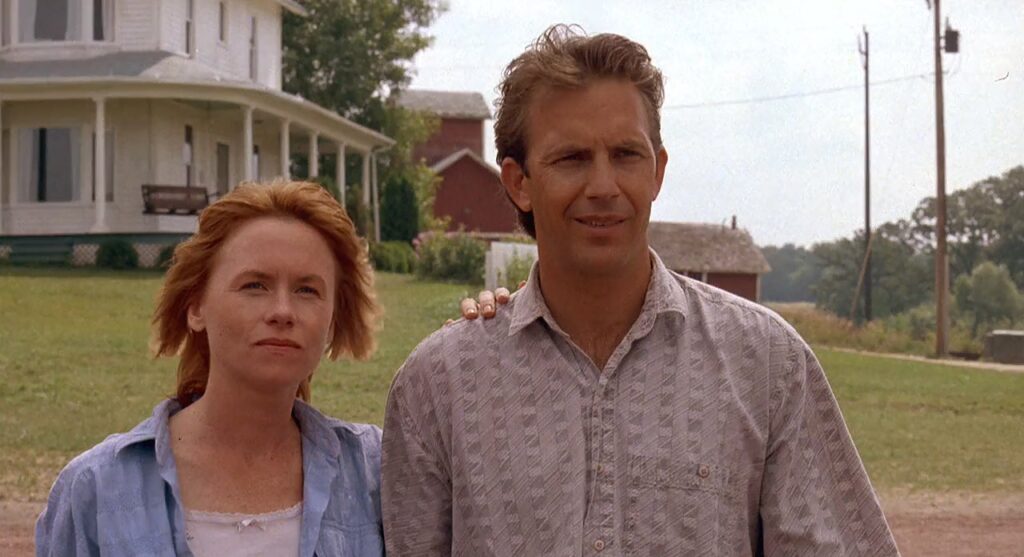 In a lot of movies where the main character tries to break the mold and accomplish the impossible, his or her husband or wife serves as an obstacle and tries to prevent it from happening. Adrian screaming “You can’t win!” at Rocky in “Rocky IV” jumps to mind or Renee Zellweger as James J. Braddock’s (Russell Crowe) wife in “Cinderella Man” constantly trying to stop Braddock from boxing. It makes the audience treat the significant other as an antagonist, which isn’t always necessary.

But not Amy Madigan’s Annie Kinsella. When her husband says he’s hearing a voice and he wants to plow over their corn and build a baseball field, she jokes about it. But when she realizes Ray is serious, she throws her support behind him. She helps him research, talks through the situation with him and serves as the voice of reason. She challenges him, but ultimately, she stands by her husband.

That would have been enough for the film to work, but Annie Kinsella does so much more. The character provides some great laughs and takes on book burners at a school assembly. The film actually skips over her victory at the school too fast. It’s an awesome scene where she wins over the crowd with just a few words in a matter of minutes. She also threatens to fight a parent after calling her a Nazi cow before leaving to an ovation. It’s funny and cool at the same time. It shows the film cared about building her character. She’s not just the wife. She’s Annie. Unfortunately it moves very quickly into Ray figuring out whose pain he needs to ease, but not before Annie celebrates her win by sliding into the lockers and reliving the moment she called the other parent a Nazi cow.

Madigan’s performance as Annie proves vital as it elevates the film, where other movies would make her character a plot device. 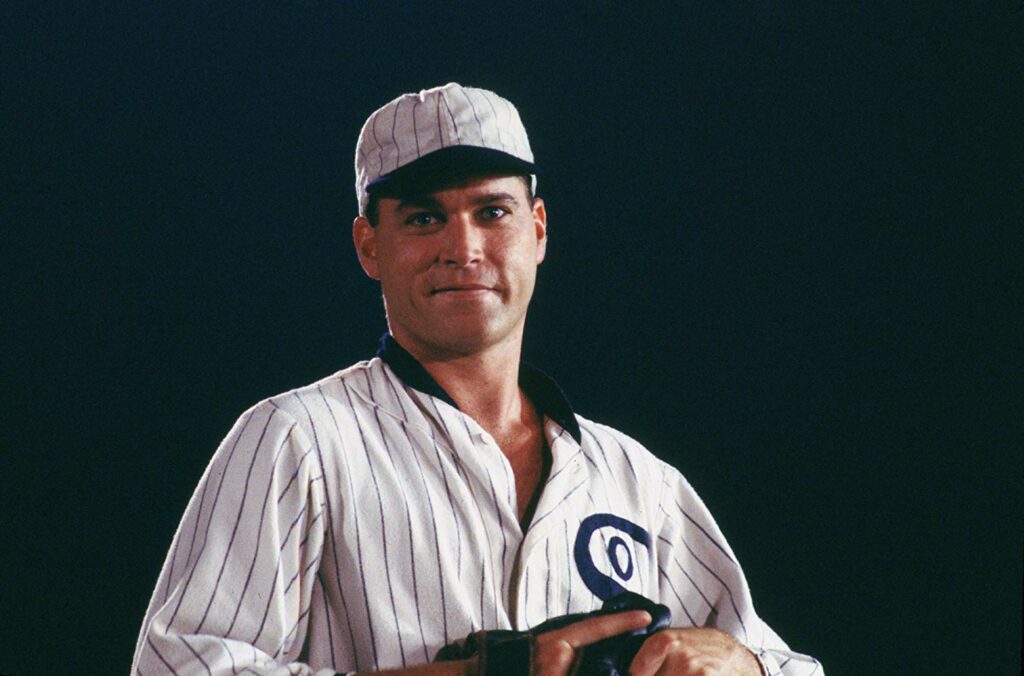 When watching this movie, my dad often points out “Field of Dreams” is Ray Liotta’s least Ray Liotta role. It makes me laugh because he’s right. The film needs a contained and understated performance from Liotta as Shoeless Joe Jackson and he delivers. Those five minutes when Shoeless Joe walks onto the field, catches fly balls and takes batting practice are magic. Liotta also delivers some great lines perfectly. He doesn’t say much, but the character needs his subtle line reading. Also, his smirk when Terence Mann (James Earl Jones) argues with Ray Kinsella saying, “You said your finger was a gun,” is gold.

“Field of Dreams” came out a year before “Goodfellas.” The Martin Scorsese flick proved the apex of his career, portraying a vastly different character than Shoeless Joe. While he’ll be known for his work in “Goodfellas,” Liotta nails his role in “Field of Dreams.” 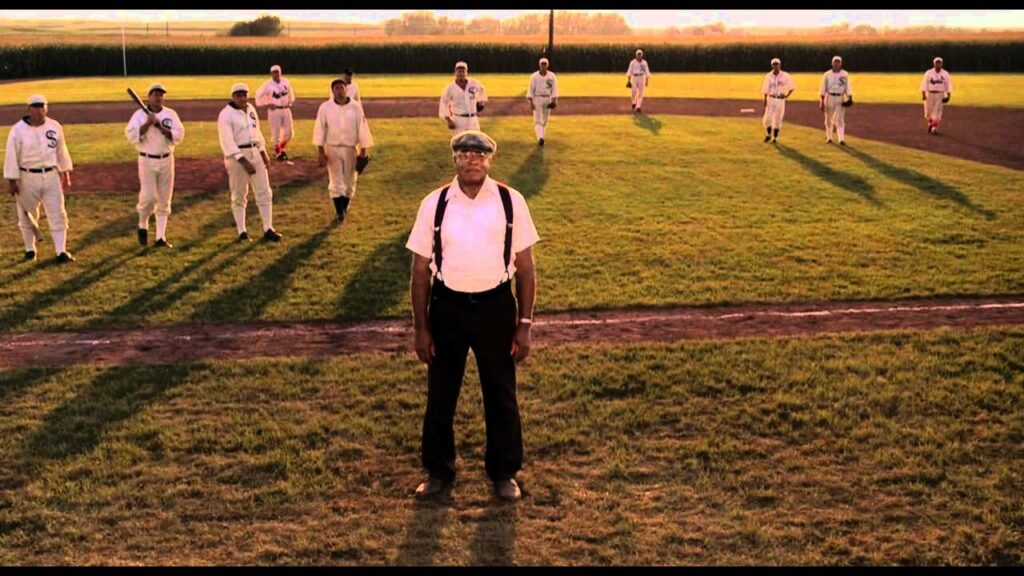 After “Field of Dreams” already has audiences hooked, the film adds James Earl Jones (Terence Mann) and the late Burt Lancaster (Dr. Archibald “Moonlight” Graham). Jones immediately takes the film to another level. Audiences fall in love with the curmudgeon as he just wants to be left alone and are with him every step of the way as he rediscovers his passion. His speech at the end of the film speaks for itself. No other actor could deliver it better. He also makes the audience laugh … a lot.

Lancaster has a smaller but important role as “Field of Dreams” serves as a fitting final feature film for the actor. The audience quickly warms to his charm, the love he has for his wife and his passion for baseball. That instant connection proves vital to the emotional impact at the end of the movie when he gets the at-bat he always desired and gives away his opportunity to play baseball again in order to save a child’s life. 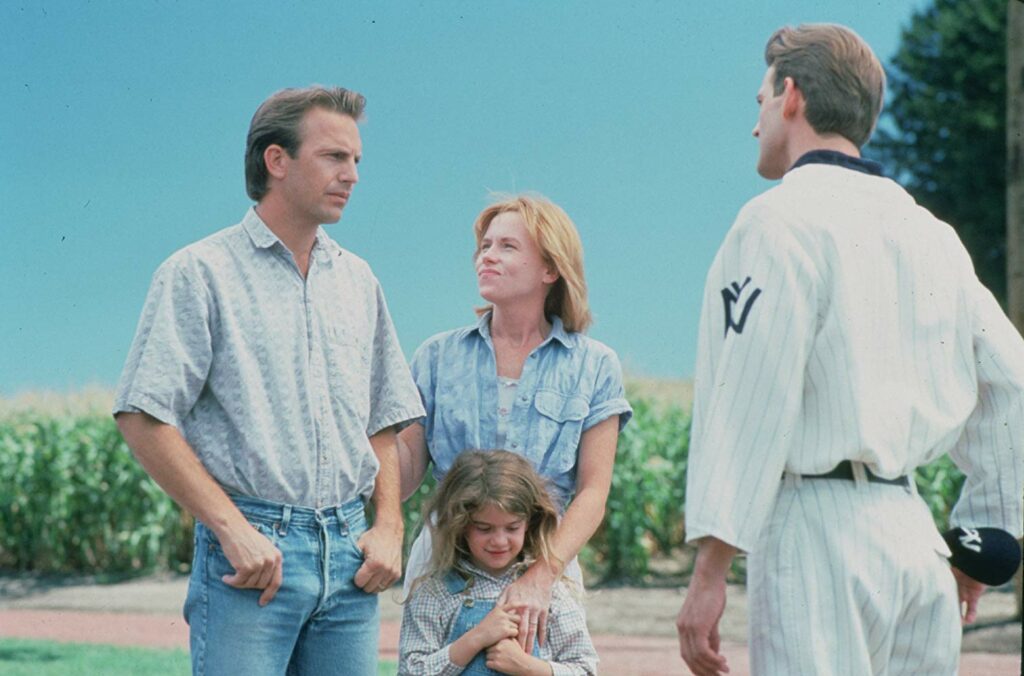 “Field of Dreams” doesn’t get off the ground without its phenomenal writing. Kevin Costner did a recent interview on the Bill Simmons Podcast where he said he is very script driven when choosing roles. He didn’t want to do back-to-back baseball movies, but after reading the script he joined the cast. “Field of Dreams” earned an Oscar nomination for best adapted screenplay. The film was adapted from the W.P. Kinsella novel “Shoeless Joe” and vastly improves on the book, especially the ending. In the book, there is no mystery of Ray’s father. Most importantly, there’s no catch.

The movie had great dialogue throughout. It’s funny and it moves without a dull moment. Then the last 20 minutes happen, arguably the greatest 20 minutes in film history.

It starts with his brother-in-law trying to demand Ray sell the farm before his daughter, Karin, offers a solution for the family to make money. The film once again proves every character has worth. Sure, Jones’ (Terence Mann) “People will come” speech is what audiences will always remember, but he simply expands on a child’s idea. The adults listen to her and don’t dismiss her because she’s a child. It’s beautiful.

That quickly jumps to Moonlight Graham having to leave the field to save Karin, who was choking on a hot dog after she fell from the bleachers. Shoeless Joe telling Graham, “Hey, rookie! You were good,” is still incredibly touching.

Then, Terence Mann fully rediscovers himself and is invited into the cornfield. He also tells Ray he will write about it.

After all that, it is finally revealed why Ray built the field. Ray’s father, John Kinsella, returns. The entire movie establishes their strained relationship and how Ray regretted the last thing he said to him and that he used to refuse to play catch with him. It perfectly sets up this moment where he earns a second chance.

Their conversation is so beautiful as they build to the point where they will finally recognize each other as father and son. It’s very subtle, but the dialogue evolves as the characters start to act like father and son before Ray outright says it.

John asks Ray: “Is this heaven?”

John’s surprise is two-fold. He’s shocked his son lives in Iowa and he’s legitimately stunned it’s not heaven. Because he is so thrilled to have another opportunity with his son.

I appreciate the next line more and more every time I watch the movie. It tips the scales as Ray finally treats John like a father again and acts like his son.

Excited to fill his son with joy and reassure his child like any father would, John responds: “Oh yeah. It’s the place where dreams come true.”

Ray looks around, takes in his life and what he has and truly appreciates where he is. Beautifully foreshadowed in the beginning of the film when Ray’s wife and daughter are laughing on the porch, the scene repeats itself as he looks at his perfect, happy family.

Ray embraces his life and accepts: “Maybe this is heaven.”

He’s no longer searching for something. He found it, and he’s fulfilled.

They say goodnight to each other before Ray finally breaks down the wall.

As they toss the ball back and forth, it’s beautiful when Ray catches the first ball from his father. He embraces it with his glove, pulls it out carefully and gives a slight smile as he throws it back.

If this somehow doesn’t have the audience crying by now, Annie throws the lights on for the father and son playing catch and cars start pulling into the parking lot to see the field and the players. They’ll no longer have financial struggles.

It’s a relentless emotional roller coaster, and it’s all earned. That’s what resonates. That’s why “Field of Dreams” will always stand the test of time. That’s why it’s one of my favorite movies ever.