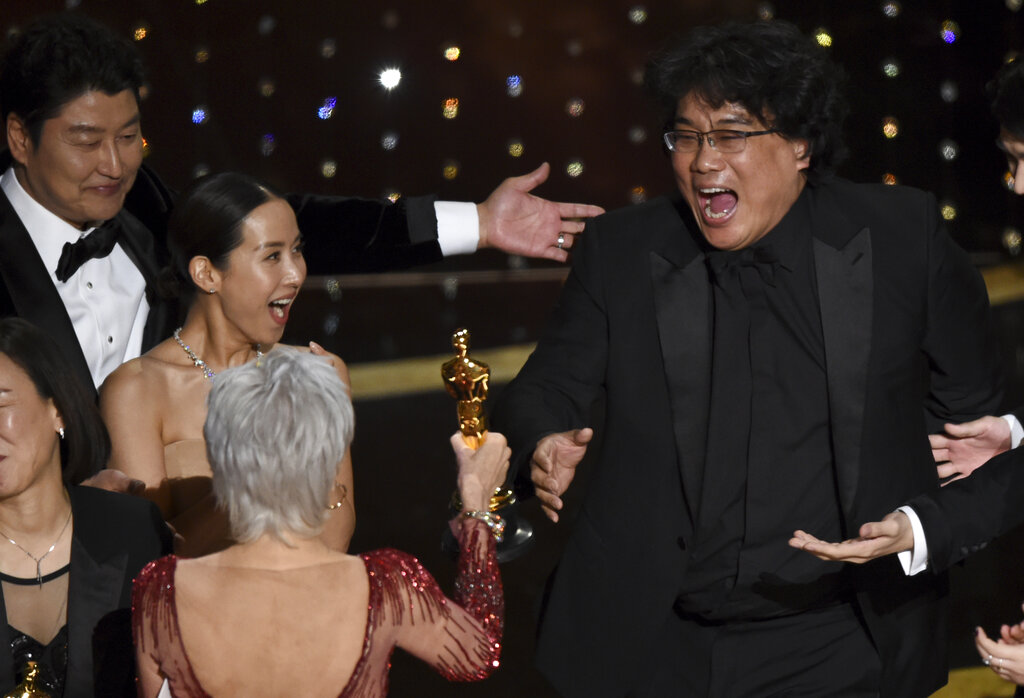 And the winners are … Takeaways from the 92nd Academy Awards

Just when Sunday’s 92nd Academy Awards seemed like a relatively straight-forward affair, “Parasite” turned the tables and ran them for the night. Let’s look at the award show’s big takeaways, from historic upsets to major snubs to surprise performances.

“Parasite” wins the night: Bong Joon-ho’s critically acclaimed black comedy pulled off a stunning upset by bumping frontrunner “1917” for best picture, making history in the process. The South Korean satire about class divisions is the first foreign language film in Oscars history to win the top prize. Bong also claimed best director over the heavily favored Sam Mendes for “1917,” becoming the second helmer of a non-English film to win the award. In total, “Parasite” took home four statuettes, including international film and original screenplay. Nothing – not even the Academy itself – could stop the film’s run. When Bong and the film’s cast and producers assembled on stage to give their acceptance speech for best picture, the lights shut off, signaling the show’s end. But the film is so beloved that the audience started cheering for the crew to continue, which they did when the lights came back on.

“1917” admits defeat: Despite collecting wins from the Producers Guild, Directors Guild and the BAFTAs, the World War I epic failed to claim any above-the-line awards in a shocking turn of events. Instead, the film’s three wins were relegated to technical categories, receiving recognition for its groundbreaking one-take style. “1917” earned Roger Deakins his second statue for cinematography, as well as awards for sound mixing and visual effects. 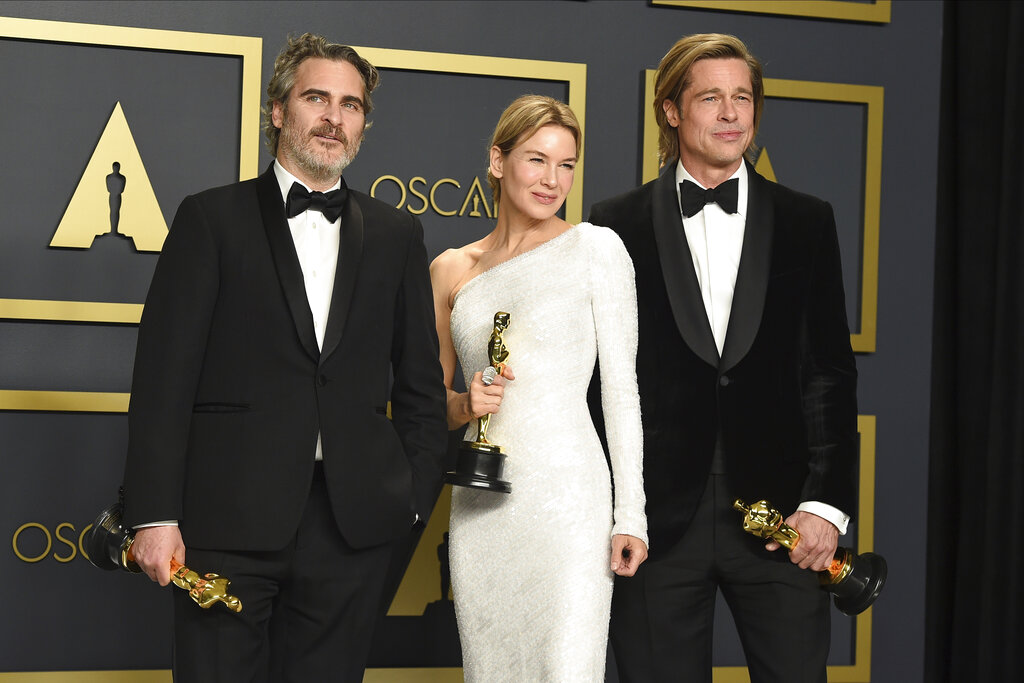 No surprises in acting: This year’s frontrunners in the four acting categories panned out as expected. Joaquin Phoenix won best actor for his menacing turn as Batman’s nemesis in “Joker,” claiming one of the comic book film’s two wins after leading all films with 11 nominations. Renee Zellweger’s transformation into screen legend Judy Garland in “Judy” earned her the best actress trophy, cementing her comeback after a six-year break from acting. Laura Dern continued her awards streak by taking home best supporting actress for “Marriage Story.” And Brad Pitt won best supporting actor for “Once Upon a Time … in Hollywood,” his first acting Oscar in a 30-year career.

“Irishman” gets whacked: Out of all the best picture nominees, “The Irishman” was the only one to go home empty-handed. Martin Scorsese’s 3.5-hour mafia epic went into the night with 10 nominations, tied with “1917” and “Once Upon a Time … in Hollywood” for the second-most nods, including a best supporting actor nomination for Joe Pesci as Kingston mafia don Russell Bufalino. The film’s disappointing awards run marked a dim night for Netflix. The streaming service won just two of its award-leading 24 nominations: Its first acting Oscar for Dern in “Marriage Story” and best documentary for “American Factory.” As for “The Irishman,” there is one honor the film can claim. As Take 2 blogger Joe Baress tweeted: “The #Oscars lasted three more minutes than ‘The Irishman.’ Congrats to ‘The Irishman’ as this is the only award it won this evening.”

Is that Eminem?! The Academy Awards broadcast featured great performances by all the best original song nominees. Idina Menzel sang “Into the Unknown” from “Frozen 2,” backed by singers in various languages. Randy Newman took to the piano to sing “I Can’t Let You Throw Yourself Away” from “Toy Story 4.” Chrissy Metz belted out “I’m Standing with You” from the Christian-based film “Breakthrough,” written by celebrated songwriter Diane Warren. Dual nominee Cynthia Erivo performed the moving “Stand Up” from “Harriet,” for which she was also nominated for best actress. And the legendary Elton John sang “(I’m Gonna) Love Me Again” from his biopic “Rocketman,” which won the award. But they all may have been upstaged by a surprise performance from Eminem. After skipping out on the 2003 awards show, the rapper showed up 17 years late to perform his Oscar-winning song “Lose Yourself” from “8 Mile.” Guess Eminem didn’t want to lose his “one shot” to finally perform it. And when he did, the audience rewarded the rapper with a standing ovation. 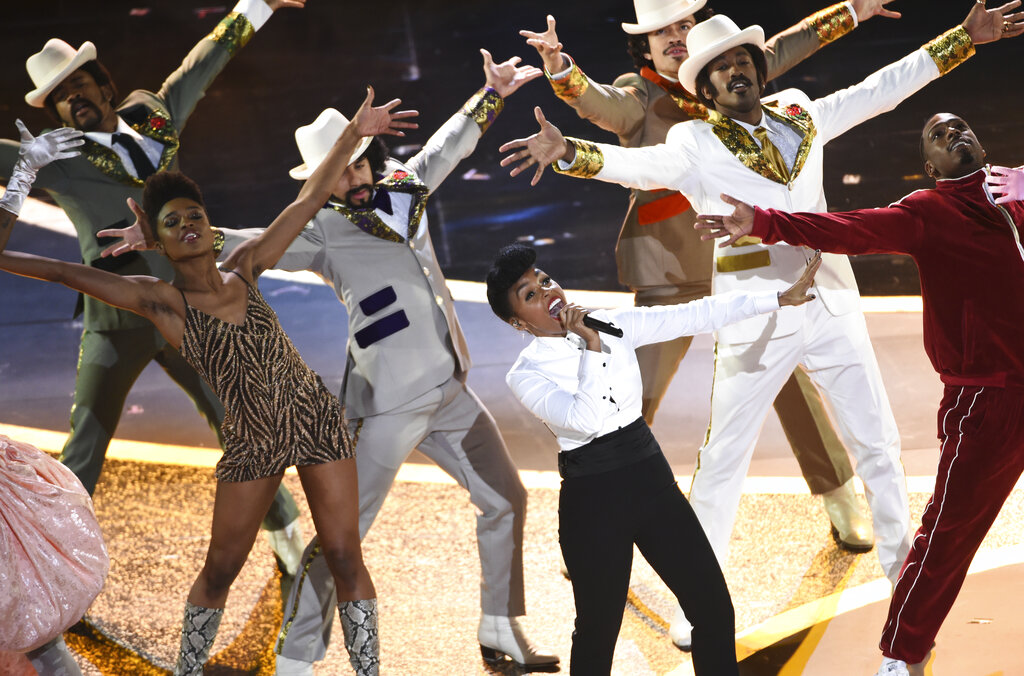 Janelle Monae performs onstage at the Oscars on Sunday at the Dolby Theatre in Los Angeles. (AP Photo/Chris Pizzello)

Acknowledging the lack of diversity: This year’s Oscars have been criticized for an alarming shutout of minority nominees in the main categories. Out of the 20 acting nominees, only one, Cynthia Erivo, was a person of color, and the directing category completely snubbed women. The awards show’s energetic opening tried to rectify this. The electric Janelle Monae kicked off the night with a rendition of “Won’t You Be My Neighbor?” from “Mister Roger’s Neighborhood,” bringing in Billy Porter and an array of diverse dancers. Monae acknowledged the strong performances of women behind the camera – “We celebrate all the women who directed phenomenal films” – and identified herself as a “black, queer artist.” Here’s hoping the diversity in next year’s awards show won’t be limited to the show’s opening.

Remembering Kobe: In the wake of the basketball legend and Oscar winner’s tragic death in a helicopter crash, the awards ceremony and its attendants paid tribute to Bryant in various ways. Director Spike Lee wore a purple and gold suit – Bryant’s team colors – with his famed jersey number, 24. When Matthew A. Cherry accepted the Oscar for best animated short film for “Hair Love,” the former NFL player dedicated the award to Bryant. During the ceremony’s In Memoriam segment, a photo of Bryant holding his Oscar was the first to appear as Billie Eilish softly sang the Beatles’ “Yesterday.”

How’d we do? In our Oscars predictions, Joe and I were tied: we both went 3 for 5 with our picks in 10 of the awards’ major categories. Tune into the Scranton Times-Tribune’s YouTube channel for our Oscars wrap-up video as we look at the ceremony’s winners and losers.