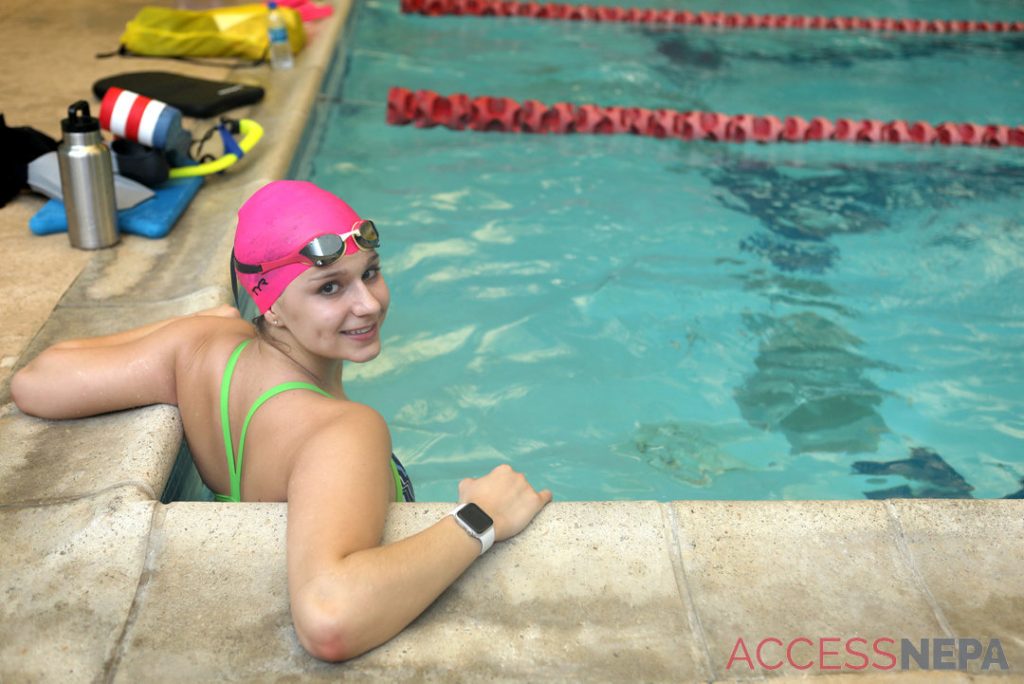 Valley View’s Nemeth a rising star in the pool

Lily Nemeth loves being in the water. Always has.

Her fondest memories include slipping down a pool slide with a life jacket, dunking in and emerging with a smile at

3 years old. In the years that followed, she remembers paddling through the waves in the deep end on her way to the ladder.

Her sheer love for being in the water led to lessons, which turned swimming into her passion.

Now, the Valley View sophomore is a gracious champion with a quiet competitive edge, a swelling confidence and growing aspirations as the season gets ready to start.

“I was taking swim lessons and pretty much was swimming for fun and I saw a flier to join the Barra Cougars,” Nemeth said. “I thought that would be great, so I joined, and from that swimming has just been my thing.

“It’s been my favorite thing to do.”

Once Nemeth moved from sliding and dunking and started taking lessons, she showed real talent in the water.

She developed a quick stroke and endurance. As a member of the Barra Cougars club team, under the tutelage of coaches Rick Evans, Eric Kopa, Leslie Kopa and Gene Newton, Nemeth showed signs of a bright future.

“Everything started out with just going to practices and it progressively got harder as I learned the strokes,” Nemeth said. “When you have to make times and have to work to drop times is when I started to get really serious. Everything just clicked.”

When the pool at Valley View closed, she joined the Sea Knights club and success continued. Nemeth, who is also a distinguished honor roll student, a dancer and a cheerleader, found joy in competing and swimming.

“I realized early, that swimming became my thing,” Nemeth said. “I would be in the relays with the older girls and that made me want to drop more time and be faster every time I competed. I went to every single practice and worked very hard. I went to practices early in the morning and late at night. I went to them all because I always wanted to swim faster.”

After graduating from the Sea Knights, Nemeth advanced to the varsity team at Valley View.

She made a strong first impression. Throughout the regular season, Nemeth emerged as a steady first-place finisher for Valley View, which continues to sponsor a thriving program despite the pool remaining shuttered at the school.

At each meet, Nemeth has a unique ability to channel her thoughts and emotions. Once on the block, she puts herself into a closed zone where all she thinks about is cutting through the water faster than the time before.

“I just completely focus,” Nemeth said. “I think about each race before it happens. I think about my turns and my breathing. I picture it all in my head so that when I am on that block I am already prepared mentally.”

She is a fierce competitor against the clock.

At season’s end, Nemeth took to the top step of the podium at the Les Richards Championships with a strong performance with a third-place finish in the 200-yard freestyle and she won the 100 free in 54.21 seconds.

Her efforts and accomplishments landed her on the All-Region team and energized her entire family.

“It’s just been amazing to see her drive to drop her times each time she is in the water,” her mother, Jennifer, said. “To see where she has come since such a young age has been amazing.”

Her father, Zoltan, who was active in all of his three children’s activities and as a volunteer coach in the community, died after a lengthy battle with Ocular Melanoma.

Heartbroken, the 16-year-old is motivated and has dedicated her training and season to her father.

“He would always take me to swim practices, to my dance to cheerleading and drive me to Scranton for practices,” Nemeth said. “He did whatever he could for all of us. He would always tell us all to finish things out and to never quit. You have to finish what you start.

“I am going to use him as an inspiration to do my very best all the time. I know he is always watching down on me and cheering me on.”

As a normally intense summer of meets and practice got erased by the coronavirus pandemic, Nemeth still did all that she could to get ready for her sophomore season.

She did running workouts at home and went to Planet Fitness where she hit the treadmill. Then, Nemeth joined the Pacers Aquatic club team where practices were held in the morning and were at Marywood University until the pandemic, again, shut activities down.

Regardless of the setbacks, Nemeth is back doing what she loves.

And to her, that is all that matters in these times.

“I just really want to focus on dropping my times and improving my technique,” Nemeth said. “You never really know what is going to happen or if we will get shut down, again. We are hoping for the best and to have some normal meets and I think we just want to have a great time this season.”

Through her success, Nemeth has set lofty goals.

She is active as a member of the cross country and track and field teams, and is a cheerleader at Valley View. In her limited free time, she volunteers as a cheerleading coach for the Junior Cougars.

And in the pool, she wants to improve and post strong swims to grab the attention of college coaches. Competing at the next level is now something Nemeth feels is possible.

With her already proven determination, that dream could become a reality in the years ahead.

“I would really like to swim in college,” Nemeth said. “I really never want to stop swimming.”