As a toddler, Karissa Ghigiarelli grabbed a crayon and started coloring.

Her father observed something in her frenetic strokes. She held that crayon, instinctively, as an adult would to write.

“I kept saying that a child of her age usually couldn’t do the things she was doing, like pinching and grasping a crayon,” said her mom, Christy, who is a pediatrician. “We never taught her to use a pair of scissors. She would skip many of the milestones and would just keep going.”

Ghigiarelli displayed outstanding dexterity and hand-eye coordination. Combine that with an athletic ability that led her into gymnastics and she began a journey toward a standout sports career. 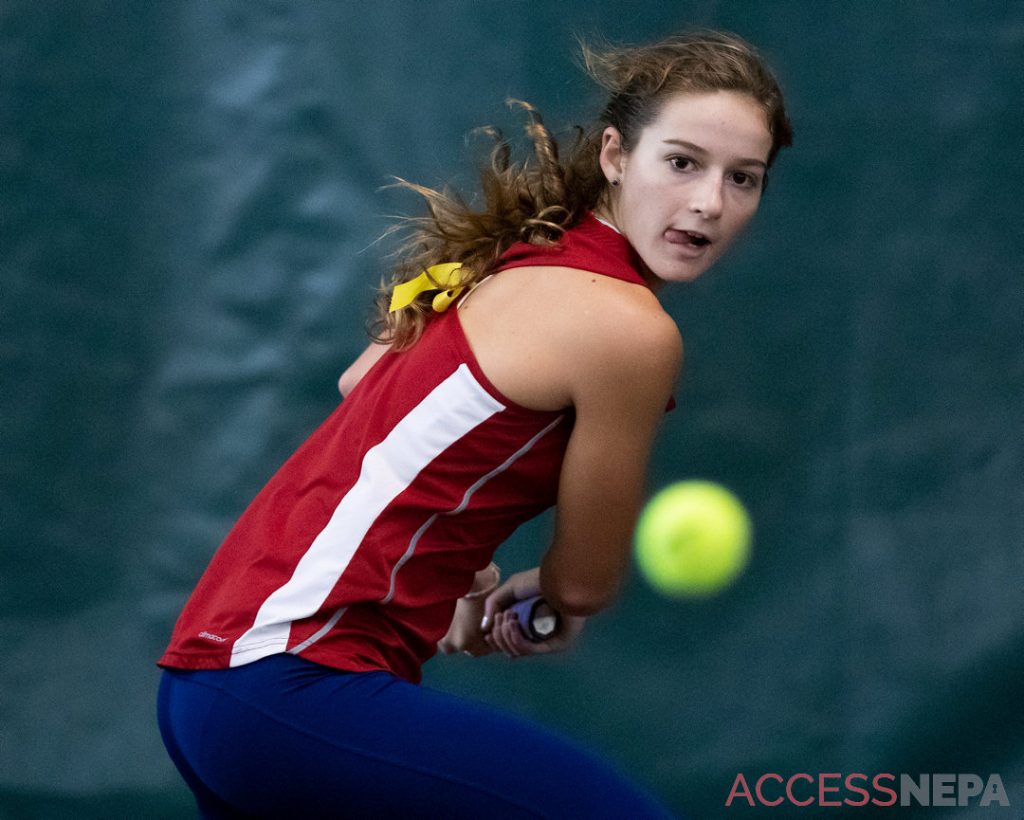 A trip to Birchwood Tennis & Fitness Club to start tennis lessons turned into her passion.

Ghigiarelli became a talented and dominant singles player on the hard courts, where last fall the Riverside sophomore won the PIAA Class 2A championship.

Ghigiarelli is The Times-Tribune Female Athlete of the Year. The award is sponsored by Coordinated Health, a member of Lehigh Valley Health Network.

“She was always doing cartwheels and handstands,” said her father, Chad, who is an orthopedic surgeon. “She did a little gymnastics, maybe once a week at some of the different gyms. She always had a strong upper body. Before you knew it she was doing backflips. That’s when tennis came into the picture and she just loved it.”

Ghigiarelli has just one loss in two years of varsity competition. As a freshman, she went 18-1, won the District 2 Class 2A title and advanced to the PIAA quarterfinals. 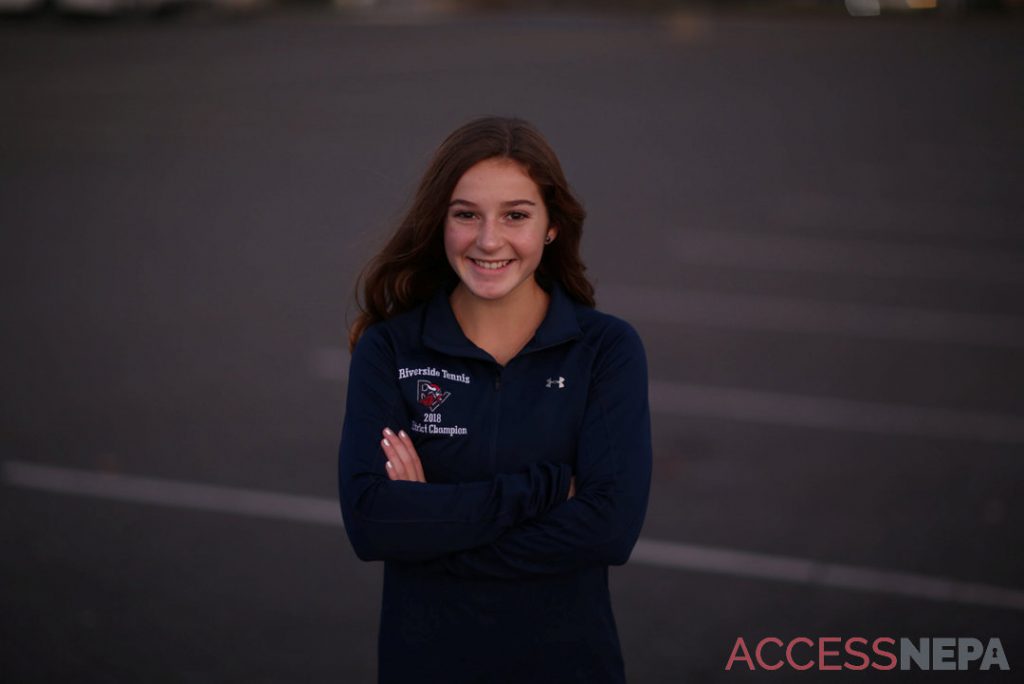 She returned for her sophomore season with a sharpened focus and a stronger game. Ghigiarelli stormed through the Lackawanna League schedule and she cruised to the District 2 Class 2A gold medal. Ghigiarelli won four matches in straight sets and lost two games.

Once back at the state tournament, Ghigiarelli proved to be a complete player, mentally and physically.

In the first round, she defeated Eastern York’s Evelyn Whiteside, 6-1, 6-0. Then, in a rematch with Knoch’s Laura Greb, who handed her that lone defeat as a freshman, Ghigiarelli exacted revenge, 6-1, 6-1.

Another straight-sets win, this time over Villa Maria Academy junior Ava Lewis, 6-0, 6-0, came in the semifinals and set up a showdown with South Williamsport’s Olivia Dorner, the No. 1 player in the state, in a matchup of USTA nationally-ranked sophomore players.

The match lived up to the billing as the stars traded shot after shot, battling through three grueling sets with Ghigiarelli putting it away on a perfectly placed return that skidded by Dorner to clinch the gold medal. 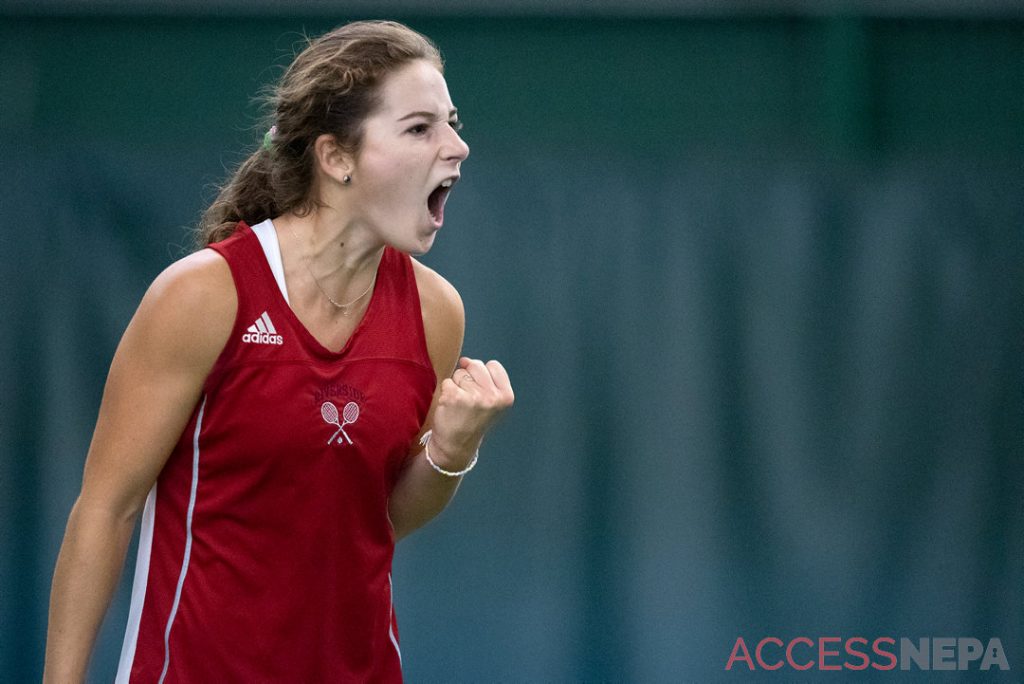 “When we saw the brackets, we felt she was going to get to that final,” Chad said. “When Olivia advanced, Karissa said to us that nobody thought she was going to win the match. Then, she sat in the Hershey Lodge totally silent. For her to come out in that setting, in front of that many people and play like that.

“That was probably the best match she ever played.”

Ghigiarelli became the first Lackawanna League player to win a state title in singles and the third from District 2. She joined Crestwood’s Christine Kansky (2001, 2003) and Wyoming Seminary’s Nathalie Joanlanne (2013).

She repeated as The Times-Tribune Player of the Year and heads into junior season with a 43-1 career record.

“It was a phenomenal season,” Christy said. “I have hugged her 9,000 times after big wins and tough losses. To have her play and win a state title, and see the joy on her face was everything.”