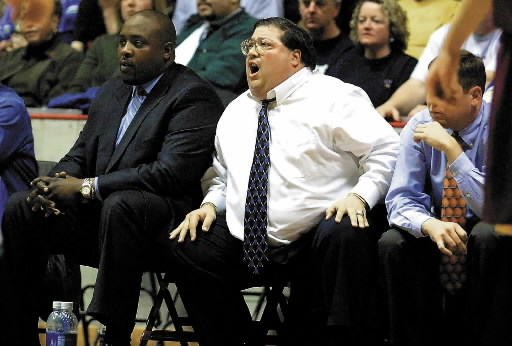 I fully expected to play for Coach John Bucci at Bishop Hannan High School once I graduated from eighth grade. After all, he was one of the reasons I wanted to go there. As a kid, my dad took me to see a lot of Bishop Hannan basketball games. Much like my peers and pretty much everyone in Scranton, I loved watching Gerry McNamara play. I was excited to hopefully one day join the championship tradition. McNamara pulled me in, but Bucci helped solidify the decision.

I had the opportunity to play for Bucci’s Hoop City AAU team just before high school. On day one, it was clear he cared about all of his players. Seeing him from afar on the sideline doesn’t tell the whole story. What parents and fans didn’t always see was his love of teaching and making his players better. When he would talk to our team or when he came to me with individual instruction, he would often start sentences for you and then have you finish them. So a lot of times he would finish his part by saying, “And then you do what?” or “Because what?” At that time at age 14, we were all students of the game. That helped me. It helped us all learn. And he respected us. We were just a bunch of grade school kids, but he treated us like adults. And he was with you every step of the way.

That passion for each player stuck. He would absolutely yell at you if you did something wrong. I knew when I messed up I definitely deserved it, but it didn’t bother me because he would get just as excited when you succeeded. I think his anger actually came from how much he cared about the players. He knew we could be better. So he pushed us. There was one tournament we went to and I made the worst pass. The other team had just scored and I took the ball out and just nonchalantly threw it inbounds where the defender was all too happy to easily steal the lazy pass and put it in for a much easier lay-up. Bucci called timeout. I tried not to look at him, but he was waiting for me to look at him. He just stared at me. And he yelled, “That’s ridiculous, Joe!” He wasn’t wrong.

Here was the difference, though. He didn’t take me out. I wasn’t put into the doghouse. He gave me an opportunity to make up for it. Luckily, I did as we went on a run that was capped by a breakaway lay-up from me. Side note, I stepped over the defender after the lay-up much like Allen Iverson stepped over Tyronn Lue in Game 1 of the 2001 NBA Finals to which Bucci yelled, “Knock it off, Joe.” The beautiful thing was he loved it. Not the act of taunting, but the fact that I responded to his challenge. When I got to the bench, he kind of smirked and softly said, “Did you really just step over him?” I chuckled and said, “Yeah, I guess I did.” He laughed and playfully pushed me toward the bench.

Nothing gave him more joy than watching his kids succeed. I got a lot high-fives from him and it was that encouragement that helped us thrive. He was real with us and like I said earlier, he treated us like adults. Which is why he told me I needed to fix my shot before the high school level. I scored a lot of points in grade school, so that was a weird thing to hear. But he said it so I believed. So, I got to work. Check that, we got to work. Bucci didn’t just tell me to change my shot. He’s the one who changed It. I would meet him at Hoop City when no one else was there and we worked on it until it was right. My shot went from a knuckleball to the proper rotation. Most importantly, I became almost automatic from the free throw line. I was ready for high school ball. He was a huge part of that.

I never played for Bucci at Bishop Hannan because he stepped down before I got there, but he was a big reason why I succeeded. I was no star. I didn’t see a lot of minutes until my senior year when I was a role player off the bench for the newly formed Holy Cross High School after Bishop Hannan’s merger with Bishop O’Hara. But, I had a nice game in a matchup with rival Old Forge and we needed some free throws to put the game away. The Blue Devils fouled me twice and I knocked all four down with ease. You see, I had this nice stroke from the free throw line a good man taught me years earlier.

I’m sure others have many more and better stories than I do. That’s a testament to how much he cared about each individual player. I just became a role player for a very good high school basketball team, but he didn’t care who you were, as long as you were willing to work.

His death is a crushing blow to the community and anyone he ever helped, but we sincerely thank you.