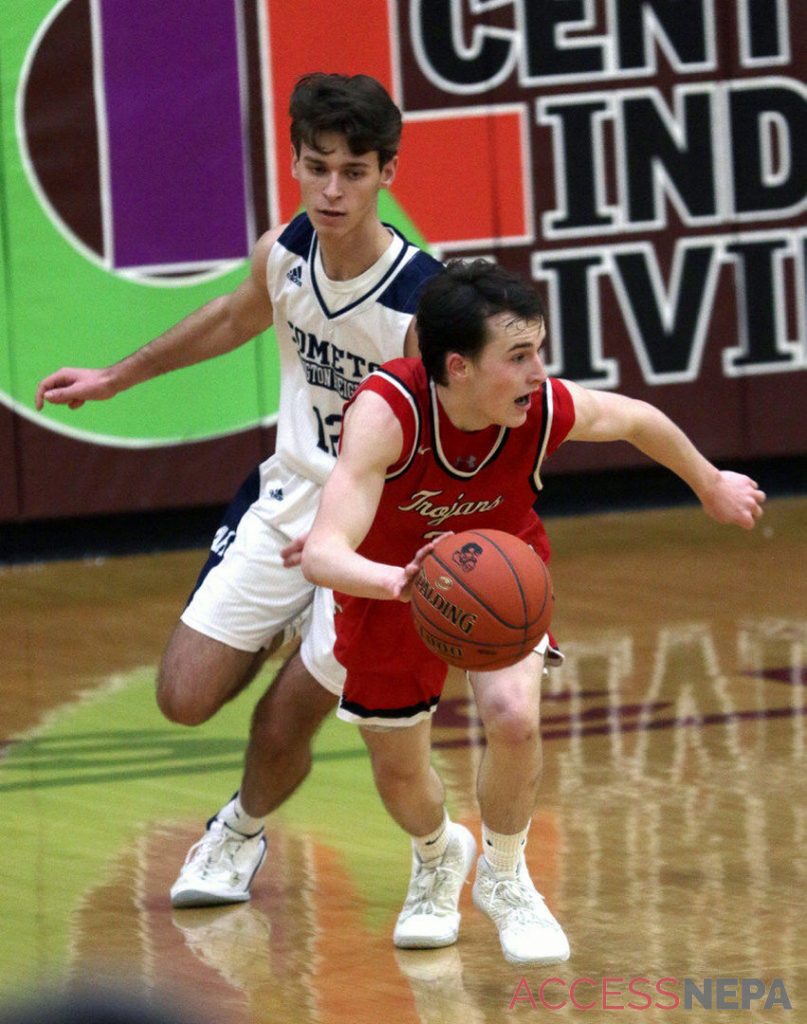 Well, as patiently as he can considering the circumstances.

For an entire offseason of uncertainty, one where he sat idle during the spring when he could have been in the outfield for the North Pocono baseball team, Walsh maintained his athletic focus, driven by the belief the coronavirus pandemic wouldn’t cost him a basketball season, as well.

Inspired when he watched as his classmates competed in the fall, the senior even joined the golf team for the first time just to get back some competitive activity.

He refuses to give up on leading this North Pocono team, which has high expectations in his final year.

“It has been tough,” Walsh said. “We were ready for the season to start, we couldn’t wait, and then we got the bad news that we were pushed back. My local gym closed. It’s very hard when you are trying to do everything at home.

“It’s emotionally sad, but we are hopefully starting soon.”

That means teams can get back to practice this afternoon if they choose.

However, North Pocono will not return to in-person practices for at least another week.

For Walsh and his teammates, this has been a test of their mental toughness as much as their physical strength. North Pocono has not had an in-person practice and needs to complete 10 before having a contest. Superintendents for Lackawanna Interscholastic Athletic Association schools earmarked Jan. 21 as the first play date.

That gives Walsh time. It is an anxious time, however.

While these decisions are beyond his control, he wants to get back at it.

“I have been looking forward to this season for so long,” Walsh, 17, said. “We have a great team and this could be a very good season for us.”

There has been a buzz around this basketball team at North Pocono for some time.

As early as their elementary school years, their skills were evident. Coach Pat Shields, who is a sixth grade teacher at the school, could see the potential of the group.

In those years, Shields started building a bond with Walsh. The two played games against each other at the middle school gym, a tradition that continues.

“He used to beat me all the time,” Walsh said. “They were always close, though. I think I had a couple of wins in there.”

As Walsh and his classmates, which includes Matt Domanish and Damarco Maglio, started moving through the system, they saw increased success that elevated their confidence.

In their freshman year, Walsh, Maglio and Domanish moved to the varsity team. And they contributed. The trio combined for 132 points and 25 3-pointers. However, the Trojans won only five games.

“Ever since freshman year, we have all been best friends,” Walsh said. “We were always playing together and when we hit high school the chemistry as a basketball team just built.”

A year later, Ryan Ruddy moved to the varsity team, and with Walsh, Maglio and Domanish, and then-senior Robert VanBrunt they made strides in the team’s development. That season, Walsh finished as the team’s second-leading scorer and knocked down 49 3-pointers.

“He shows great resiliency,” Shields said. “He is a great athlete across the board. His confidence sets the tone for all of the guys. There will never be any excuses with Zach and that’s the attitude all of these guys have.”

In the spring, Walsh showed his leadership on the baseball field.

Batting in the leadoff slot, he hit for an average of .347 and had three doubles, two triples, 15 RBIs and scored a league-best 20 runs. He earned a spot on The Times-Tribune All-Region team.

His success carried over to basketball in the winter. A skilled guard who can run the show, Walsh became an explosive scorer. In North Pocono’s second game of the season, he hit for 23 points in a 62-61 loss to Dallas, which eventually reached the District 2 Class 5A final. He also scored 22 in a loss to traditional Class 6A power Hazleton Area and combined for 33 points in back-to-back losses to Scranton Prep and Valley View, the two teams that played for the District 2 Class 4A championship.

Throughout the season though, North Pocono had highs and lows.

In the preseason, North Pocono defeated Riverside, 73-47, beat Scranton, a District 2 Class 6A finalist, by 12, and swept Delaware Valley where Walsh scored a combined 33 points. 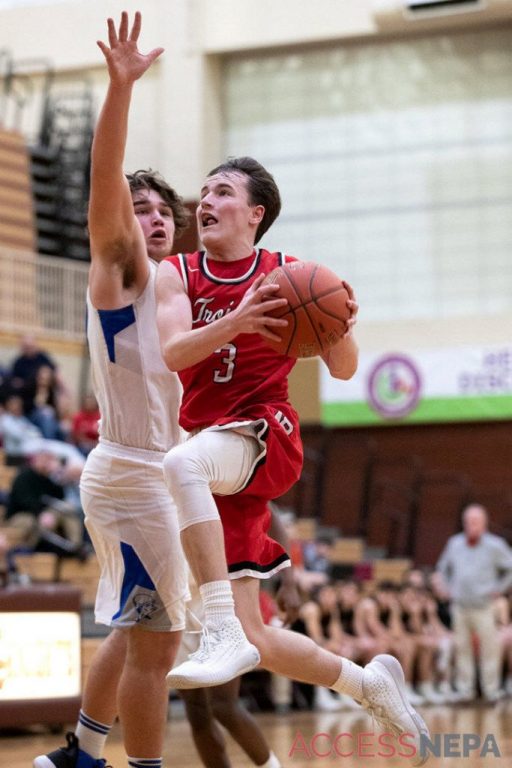 ACCESS NEPA FILE
North Pocono’s Zach Walsh scored a game-high 23 points in a District 2 Class 5A quarterfinal loss to Abington Heights that eliminated the Trojans from the postseason.

Against Scranton Prep and Valley View, the Trojans lost those two games by an average of 4.5 points. They challenged Abington Heights in a 10-point loss where Walsh scored 18 points, and twice, they gave eventual District 2 Class 5A champion Wallenpaupack all it could handle in losses by an average of 5.5 points, which included an overtime loss.

“We had games where we played fantastic, running the court and making shots,” Walsh said. “Then, we had other games where we made mistakes that cost us. This year we are working toward erasing the mistakes.”

Then, in the District 2 Class 5A playoffs, North Pocono’s roller-coaster season played out through the four quarters.

Late in the second quarter, Walsh ignited a run to close the first half, then started the third quarter with three 3-pointers and a pair of fast-break layups as the Trojans built a 38-20 lead and threatened the Comets’ eight-year postseason winning streak.

But North Pocono didn’t close the upset and Corey Perkins hit a game-winning 3-pointer as time expired for a dramatic 48-46 win.

Despite his 23 points, Walsh left the Scranton High School gymnasium heartbroken, but determined to change things as a senior.

“He has got great poise,” Shields said. “Zach was a point guard for us as a freshman and he has a real understanding of the system and he communicates that to the guys. We have at least two coaches on the court with him and Ryan Ruddy.”

After the devastating loss, Walsh shifted to baseball season. But the coronavirus pandemic canceled that season. So, he set his sights on having a memorable year in basketball.

“Over the summer, I started hitting the gym and I got a lot stronger,” Walsh said. “I really worked on my ball handling and my mid-range shot. I can already see how much my game has changed. I am faster and stronger.”

“This is the most complete group I have had since I have been here,” Shields said. “Just from top to bottom, they have been playing basketball and have been playing together since second and third grade. I have had a number of them in class and in my clubs. I am really looking forward to seeing them finish what they started.”

Now all the Trojans need to do is get the green light to start practicing.