The longest-running high school basketball tournament in the area is taking a timeout this year.

This would have been the 70th year for the event, which was scheduled for Dec. 27 and 29 at the Lackawanna College Student Union. The tournament has never missed a season since it tipped off 1951, setting the standard for local holiday basketball tournaments.

“We share in the disappointment of the student-athletes, the coaches and their families that this time-honored tradition will not be played this year,” said Chris Imperiale, sports editor of The Times-Tribune, which sponsors the tournament. “The Lynett Tournament is ingrained in the fabric of local high school sports and we are extremely proud of the role it has played in creating memories for all those involved with it.

“We look forward to when we will be able to play this prestigious event again and provide more memories for all of the participants.”

“That’s part of Christmas for us and the teams,” said Al Callejas, Holy Cross boys basketball coach and athletic director. “The kids are here for four years and they look forward to it. It’s another disappointment. I feel bad for our kids and looked forward to defending that title. It’s an opportunity that has unfortunately been lost.”

Friday was the first day of legal practice for teams in the Lackawanna League. However, Dunmore has suspended sports indefinitely and it is unsure when they will resume. Also, administrators at Holy Cross, Scranton and Scranton Prep have indicated they will not be playing games before the opening of the league season Jan. 4-5.

“We always knew it was going to be a possibility, considering the time frame of our tournament, that we would have to make this difficult decision,” Imperiale said. “We’ve been in constant communication with our partner and host Lackawanna College the last several weeks, discussing protocols and contingency plans to make every possible effort to hold the tournament. However, that hope faded in the last few days.” 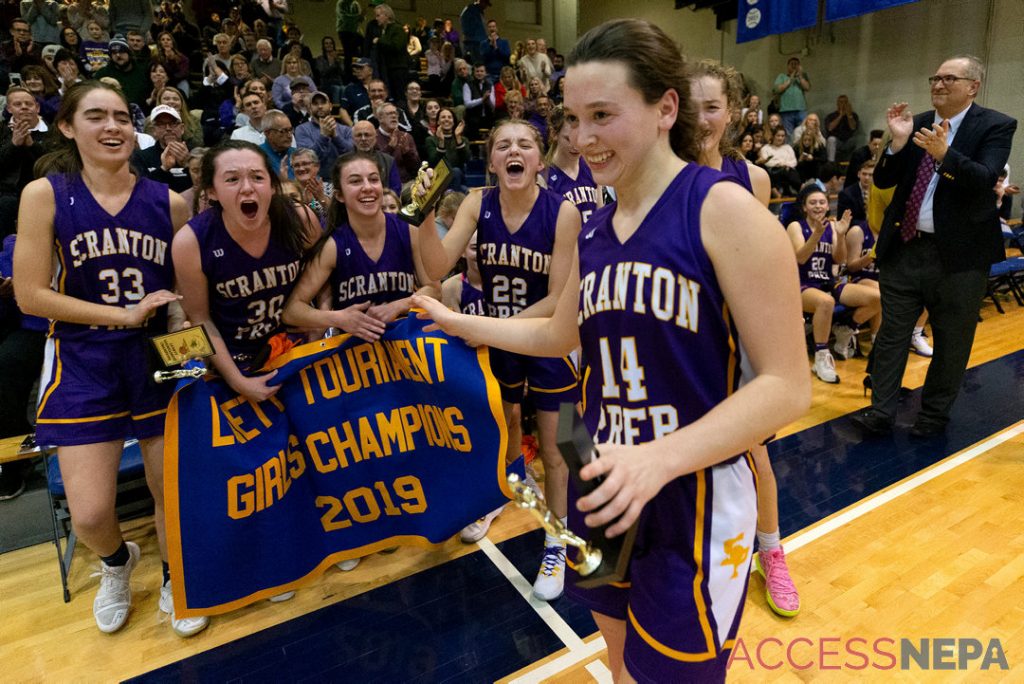 ACCESS NEPA FILE
Scranton Prep’s Rachael Rose is cheered on by her teammates as she walks up to receive her MVP trophy after Prep defeated Dunmore in the Lynett Tournament girls’ basketball championship at Lackawanna College on Sunday, Dec. 29, 2019.

The inaugural Lynett Tournament tipped off March 19, 1951 at the Scranton Catholic Youth Center in the form of a 10-day, 24-team postseason event. St. Rose of Carbondale defeated Old Forge, 65-62, for the first championship.

The field was cut in 1952 and in 1954 the tournament moved to the Christmas holiday.

A girls tournament was added in 2003.

When the CYC shuttered, the tournament moved to the newly constructed Scranton High School, where it stayed from 2001 to 2007. It returned to the historic site in 2008 after Lackawanna College purchased the facility and renovated and reopened it as the Lackawanna College Student Union.

“It’s an important tournament for our program,” Scranton Prep boys basketball coach Andrew Kettel said. “It is the first goal of our season every year. It is a tradition locally for basketball. We understand, but we are disappointed. I am upset for our seniors who don’t have an opportunity to play in such an historic event in our area.”