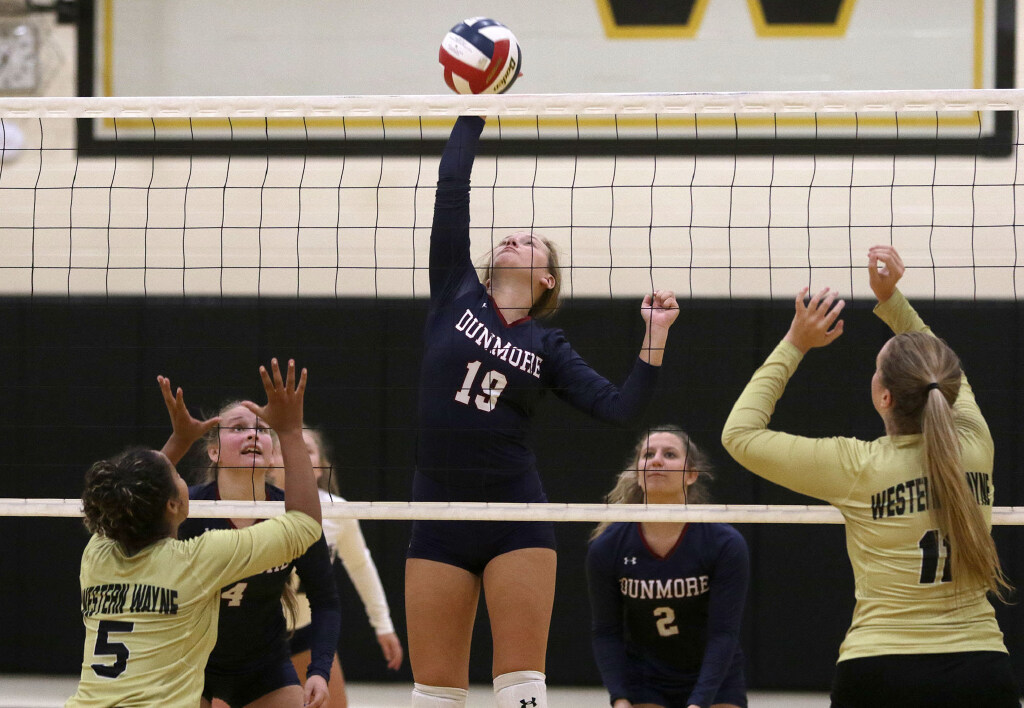 There were some more outstanding matches last week in the Lackawanna League that featured some of the top players in the region.

Defending league and District 2 Class 3A champion Western Wayne ran its gauntlet in the schedule with a home match against Dunmore and at Blue Ridge. The Lady ‘Cats fell in their showdown with Dunmore, 3-1, in a match that had a lot of excitement and intense points.

Dunmore is starting to find its rhythm on the court and turned in a strong defensive effort in the win.

S. CANAAN TWP. – Jenna Cruser gave her team a jolt of energy and it carried through to an important win.
In a tightly contested girls volleyball match between two of the contenders in the Lackawanna League, Cruser went on a seven-point tear that included three aces that helped boost Dunmore to a 3-1 (25-15, 25-19, 17-25, 25-14) win over defending champion Western Wayne on Tuesday.
Dunmore (2-1) ended a 27-match winning streak in the regular season by the Lady ‘Cats (1-1).
“We really wanted to win this match coming off our losses from last year,” Cruser said. “We know it is a big deal for league. I wanted to go back and serve and get the ball over and in to get us on a roll and hype us up and keep the momentum on our side.
“When we are all cheering and hyping each other up after a scoring point, that is when we play our best and I just wanted us to play our best against a really good team.”

Posted by Joby Fawcett, The Times-Tribune on Tuesday, September 22, 2020

In the second big match of the week for Western Wayne, it recovered from a 2-0 deficit to turnback preseason favorite Blue Ridge, 3-2.

North Pocono remained undefeated in its debut season in the Lackawanna League. Delaware Valley dropped its second match of the season. The Lady Warriors losses are to the two teams — Berwick and Nanticoke — that are a combined 10-0 in the Wyoming Valley Conference. However, the second conference loss caused a slide to No. 2. Dunmore defeated Western Wayne and Western Wayne beat Blue Ridge and those two teams move up ahead of Blue Ridge.

In the preseason, most coaches pointed to Oct. 1 as the date when the top two teams would play. Blue Ridge is at Dunmore on Thursday in what is a very important match for Blue Ridge, which has lost twice at home to North Pocono and Western Wayne.

REMINDER: Forest City is expected to start playing again in the Lackawanna League against the teams that were awarded a bye in the COVID-19 schedule.