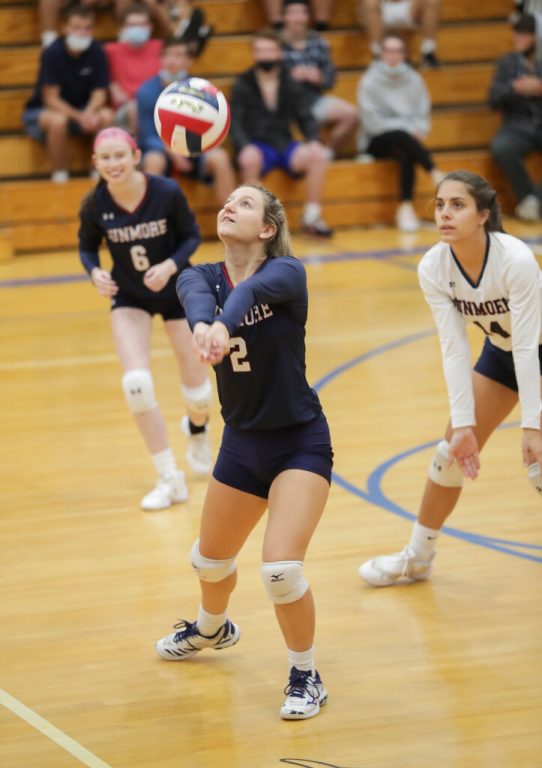 After last week’s post, which came on one of the important dates on the Wyoming Valley Conference and Lackawanna League schedules, top teams in both rose to the challenges.

It is a huge win for the dominant Class 4A program in District 2. The Lady Warriors are led this year by first-year coach Karley May, who took over for legend Bridget Crawford. May has maintained the energy and discipline of the program that she learned as an All-Region player for Crawford, who built this dynasty.

Emily Henn had 14 kills, 15 service points, including nine aces and 12 digs to lead Delaware Valley to a 3-2 (21-25, 25-18, 25-19, 15-25, 15-9) win over Berwick on Tuesday in a battle of undefeated Wyoming Valley Conference girls volleyball teams.
The Lady Warriors ended Berwick’s 22-match conference winning streak, which dates back to a loss to Delaware Valley in 2019.
“It is a huge, huge win,” first-year Delaware Valley coach Karley May said. “We knew it was going to be a difficult game. Berwick is full of really great players, but we honestly came together so well. Everybody gave 100 percent. Everyone hustled, our hitters were really strong, our passing, our defense and our serving. We just played really well.”
Leah Weinreb had seven digs and 11 service points.
Katherine Quinn, who had 10 service points, and Jazmyne Bates had seven kills each. Olivia Conza ran the offense with 23 assists, and added six service points and 13 digs.

While this win isn’t quite the magnitude of that one, it certainly sent shockwaves through the WVC.

Berwick won the WVC last season and had gotten off to a fast start this season. But, the Lady Warriors posted the five-set win and lead the conference standings, just ahead of Holy Redeemer (8-1) and Berwick (7-1). Holy Redeemer’s loss came Monday against Berwick, 3-1.

In a battle of two of the premier programs in the WVC, Berwick topped Holy Redeemer, 3-1, on Monday.
Cecelia Isenberg had a match high 28 kills for the Bulldogs, and Morgan Nevel had 16 digs and 31 assists. Camille Pinterich had 15 service points.
Kaylee Gryboski recorded 15 kills and 17 digs for the Royals, and Olivia Bilbow and Eva Szura each had 10 kills.

So, what Delaware Valley has done in the last two weeks is firmly establish itself as the No. 1 team in the ON THE BLOG rankings.

The next apparent challenge for the Lady Warriors is scheduled for Oct. 6 at home against Holy Redeemer.

Ana Pacewicz had 35 assists and seven points and Jaclyn Marichak had 11 kills and 18 digs to lead Dunmore to a Lackawanna League win.
Emma Conte had 15 kills, seven digs and eight points for the Lady Bucks, Tristan Canavan had five kills and nine points and Sienna Delfino had 12 digs.
Soyer DeLucy had 34 assists for North Pocono, Grace Calles had 22 digs, Sam Snyder had 12 kills and Sam Bajor had nine kills.

That win pushed Dunmore one spot up the ranking to No. 3 and set up Thursday night’s much-anticipated rematch of Western Wayne’s season opening 3-2 win. If the Lady ‘Cats sweep the season series, they will have the inside track on the first Lackawanna League Division I title.

Also last week, Blue Ridge, which has two losses, one to Dunmore and one to Western Wayne, started to make its move in Division II.

The Lady Raiders defeated Susquehanna, which had ascended to the top spot in Division II.

Kate Spencer had 12 digs, five aces and 15 points and Libby Zick had 14 assists, nine digs, four aces and 10 points to lead the Lady Raiders in a Lackawanna League match and rematch of last season’s District 2 Class 1A final.
Brooke Tingley had four kills for Blue Ridge, Foxlynn King had four kills, five aces and five digs and Leah McCain and Kaelynn Brant each had three kills.
Kambrie Colwell had 25 digs for Susquehanna, Megan Kiernan had 19 digs and Brianna Ashman had eight assists.

Delaware Valley remains the No. 1 with Western Wayne at No. 2. Dunmore jumps up a spot in the poll to No. 3, while North Pocono is at No. 4 and Blue Ridge is fifth. Before Blue Ridge takes on Mountain View on Friday, it has its crossover match against North Pocono on Wednesday.