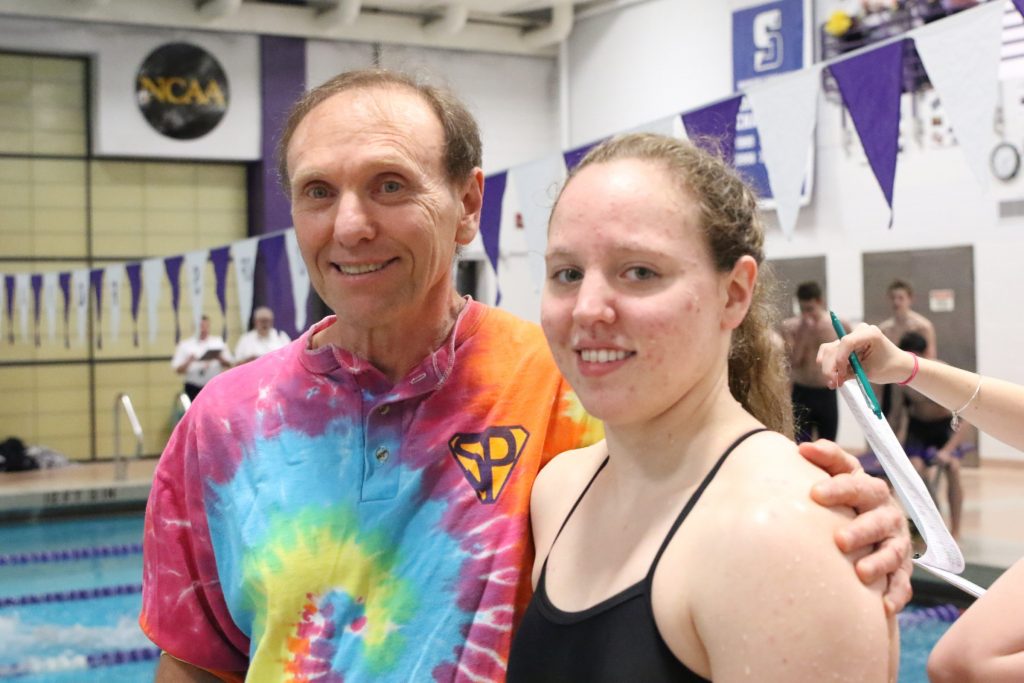 They hugged tightly, not wanting to let go.

Joe Thier draped a gold medal around his daughter Haley’s neck, then they enjoyed an embrace that lasted a little longer than those shared by the coach and his other champions.

As she stood tall on the top step of the awards

All of the hard work, long hours and dedication, the good times and the bad, and some life scares created that moment.

This swimming season completed a journey for the Thiers. While the ultimate goal focused on contending for a team state championship, a new perspective emerged. They appreciate how much their relationship grew through their love of family and swimming. 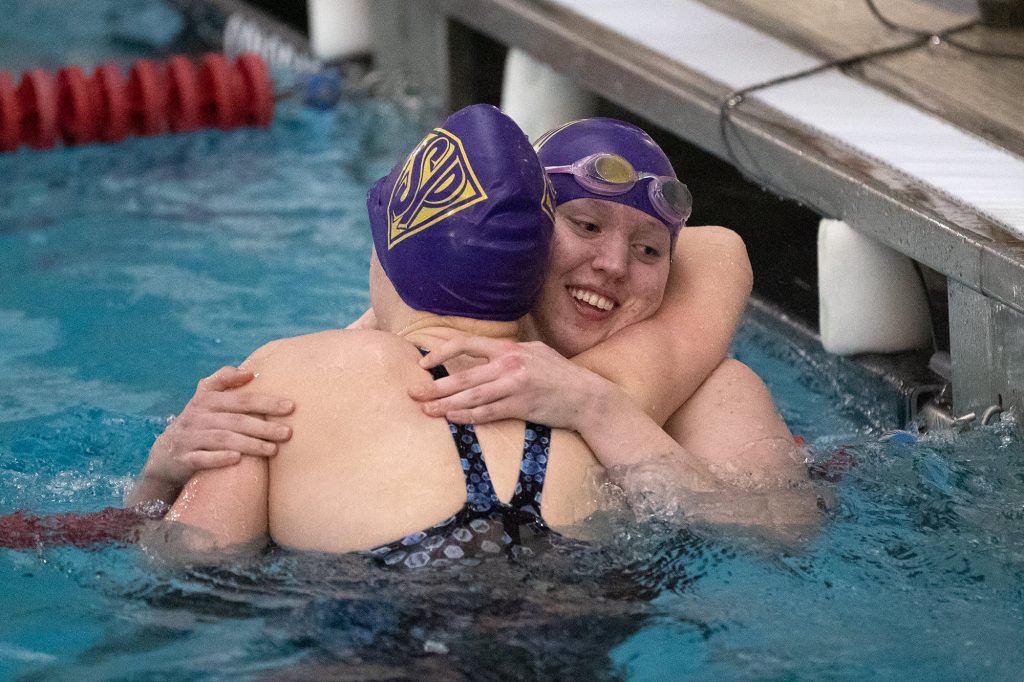 In 2001, Joe coached the Scranton Prep boys team to the PIAA Class 2A championship. During a postseason banquet saluting the Cavaliers, a father of one of the team’s stars stood up and said something that stuck with Thier whose wife, Valerie, was expecting.

“I think it was Red McAndrew who said, ‘Just think, in a few more years you will have a child to win a state championship with,’  ” he said.

Haley started swimming at a young age. She hit the water at 2 years old and her love for it grew when her training started three years later. She spent much of her free time around the Classics and her swimming idol, Mia Nonnenberg, who went on to compete for the University of Alabama.

“Mia was the biggest influence I had,” Haley said. “Our families were close and I spent a lot of time at her house, too, building our friendship.”

With her father pacing along the pool deck, Haley had immediate success. Soon enough, it seemed they would realize McAndrew’s prophetic quip.

Then, Haley faced a difficult decision.

Offered an opportunity to swim at Wyoming Seminary, an equally reputable swimming power and Scranton Prep’s most fierce rival, she ventured out on her own.

“I had planned to go to Prep all along,” Haley said. “Then, I thought, why not take the opportunity to go to Wyoming Seminary?”

Haley burst upon the scene, rating as one of the top up-and-comers in the Wyoming Valley Conference and District 2.

“I don’t think it registered,” Haley said. “It didn’t seem real. I was scared, but I figured he would be OK. He is a tough guy.”

After undergoing a procedure to insert stents to help with blockages, Joe returned to coaching the Classics and Cavaliers.

Haley regained her focus to win bronze medals in the 100-yard butterfly and the 100 backstroke at the District 2 Class 2A Championships for the Blue Knights. However, a heightened concern for her father drew her to Scranton Prep. She enrolled by the fall.

Balancing the father-coach relationship became the first step for the Thiers.

“I had to remember, I am her father and you have to separate from her being your’s and this being your’s, too,” Joe said. “It’s her’s all the time. These are her moments. When she was younger, I didn’t really coach her that much. As she got older, she kind of asked me more and I became more involved in the journey with her.

“It’s hard to be both, especially in the bad times. You aren’t looked upon so highly when things get tough. But, I wouldn’t trade it in.”

Haley appeared headed for a breakout season as a sophomore.

At the Les Richards Championships, she won gold medals in back-to-back events. She broke a meet record in the morning qualifying swims in the 50 free at 24.28 seconds and added a win in the 100 fly.

Her excitement and confidence soared.

An illness just before the District 2 Class 2A Championships provided the first hurdle in her career. Weakened and exhausted, Haley placed second in the 100 fly in 58.80 and fourth in the 50 free with a time of 24.49.

She advanced to the PIAA Championship meet and bounced back with three medals. Her efforts included a seventh-place finish in the 50 freestyle and two medals as part of relay teams.

“The year I got sick, hit me a little,” Haley said. “Over that next summer, I really trained and had a great season. The winter, though, was a bit rough.” 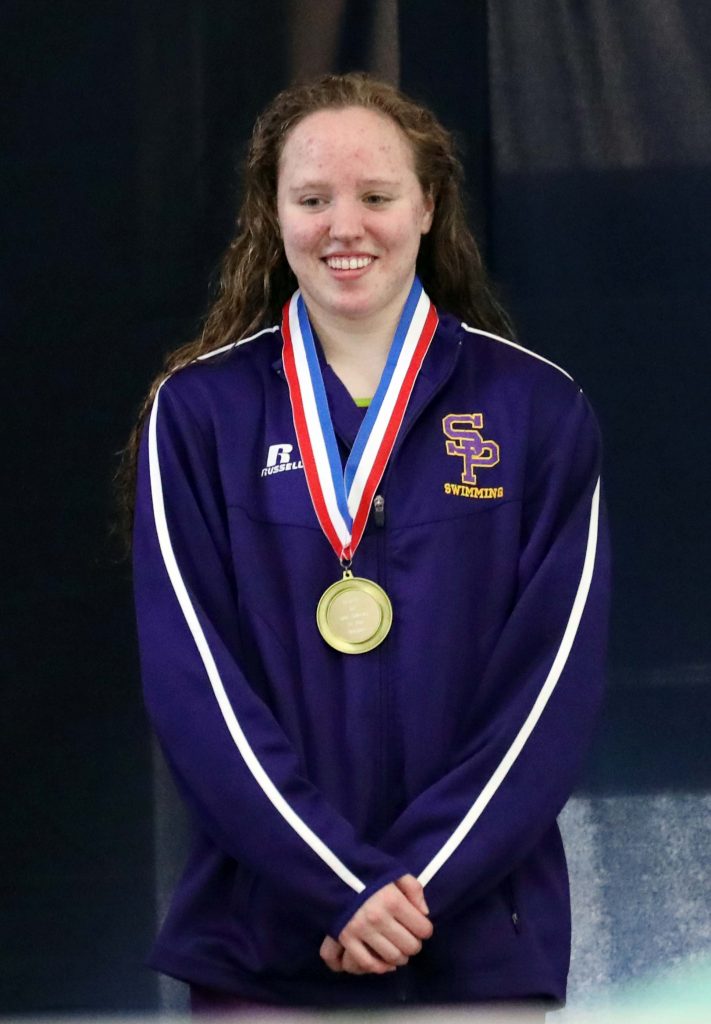 DAVE SCHERBENCO / STAFF PHOTOGRAPHER
Scranton Prep’s Haley Thier is all smiles as she claims first place in the 50-yard freestyle during the District 2 Class 2A Swimming Championships at the CYC in Wilkes Barre,

As Haley readied for what she hoped would be a medal rush in her junior year, Joe suffered another setback — a second heart attack. He needed more stents.

“The second one made it more real for me,” Haley said. “I just tried to move on. I went to practice and continued with my routine, but subconsciously, I couldn’t get his health off my mind. I had a lot of anxiety.”

Joe, too, realized more than ever the value of each day.

“I knew that I was fortunate just to be here,” Thier said. “I changed a lot of my eating habits. My lifestyle changed. I wanted to be here for her.”

Haley had an All-Region season, winning a silver medal in the 50 freestyle in 24.33 and a fifth-place medal in the 100 butterfly at the district championships.

But she wanted and expected more.

“I think that season shaped me into who I am today,” Haley said. “There were a lot of roadblocks and some failures. You have to learn to keep working hard and always get back on your feet, just like my dad.”

Haley had an unbreakable bond with her father and a new perspective.

“She’s one of the most committed athletes I know,” Joe said. “She was young when Mia was around, but she admired her so much that she followed her lead and never missed a practice. I never pushed her. She goes to the gym on her own and does all the extras. She has worked for everything she has earned.

“I have been privileged to watch her and it’s been fun to be on the journey with her.”

This season, Scranton Prep had a stable of state-ranked swimmers.

Together they went undefeated in the league season and weren’t challenged. Haley won a pair of silver medals in the 50 free and the 100 breast, second only to teammates, Alison Prushinski and Lauren Schofield. Those three and freshman Ryleigh Collins set a pair of meet records in the 200 medley and 200 free relays.

At the District 2 Class 2A Championships, Haley and her teammates dominated. Scranton Prep took first in five races, including Haley’s win in the 50 free. The relay teams again set meet records.

“I am happy with what I accomplished and the opportunities I have had,” Haley said. “I might have taken a lot of those successes for granted, because I always wanted to work harder and do better. This year, we had a great team.

“I wanted to lead the team the best I could and leave a legacy and example behind, like Mia did for me.”

The Classics won the team championship, outscoring runner-up Dallas by 110 points. They looked poised to reach their goal of a state title.

The coronavirus threat, however, forced PIAA officials to postpone the Class 2A meet.

“I was kind of shocked,” Haley, 18, said. “But, you know what? We have to be thankful for the opportunities and memories we shared. Maybe we won’t be able to go out the way we wanted, but things could be a lot worse.

“We have to be happy that we are healthy and all that we have.”

Even if her high school career is over earlier than she hoped, her hard work paid dividends. She committed to Dennison University last week and plans to study psychology, swim and follow in her father’s footsteps as a coach.

“It’s been a special ride for both of us,” Joe said proudly. “It’s one that I will certainly cherish forever.”