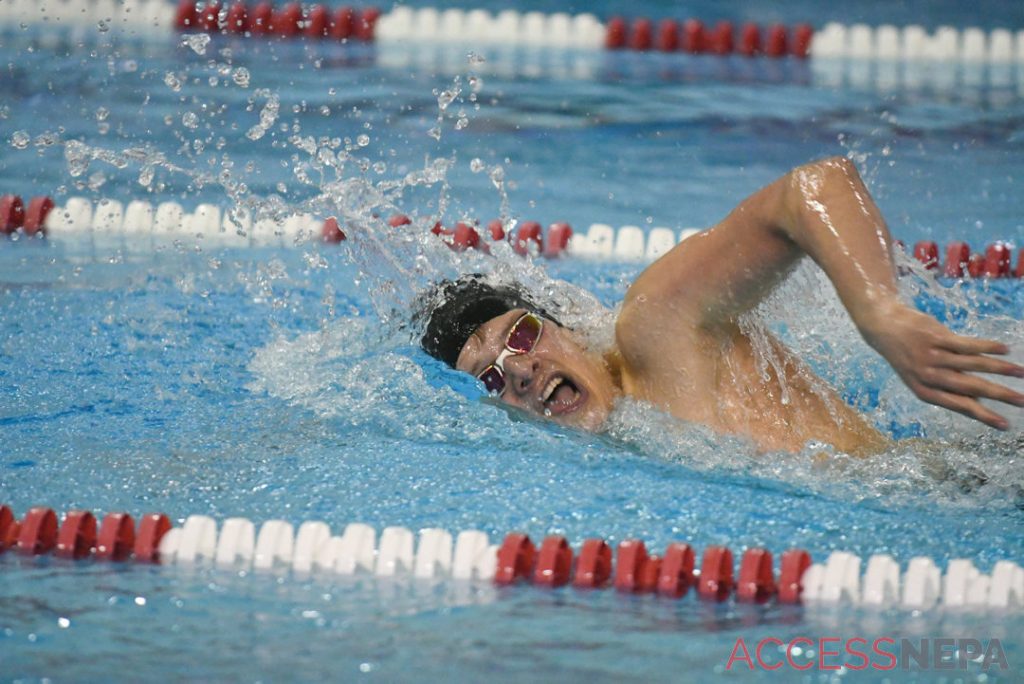 It’s been a tough 10 months for Schuylkill League swimmers.

After an impressive showing at the District 11 Swimming Championships paced by Blue Mountain sweeping the boys’ and girls’ Class AA team titles for the second straight season, the coronavirus and the repercussions of COVID-19 have left local swimmers heartbroken and frustrated.

The events since that Thursday, March 12, afternoon have been tough to swallow for local swimmers and coaches:

“Preparing for the upcoming season is like running a steeplechase event on a track,” said Pottsville boys’ coach Ned Hampford, entering his 43rd season at the helm. “Not only are there water hazards, but also numerous hurdles to clear.

“Pools closed for the entire spring, interruptions in summer training, a late start in preseason training and finally a three-week shutdown over the holidays, all pose serious concerns in the development of a season training plan.

“One thing is for sure, coaches must be flexible and be ready to change in a hurry. That is the most important lesson learned through the pandemic. The one certain element in our situation is uncertainty.”

Despite all the adversity, the Schuylkill League’s dual-meet teams and independents have pressed forward, eagerly anticipating the start of the season. There’s a ton of state-level talent in the league this year, all them chomping at the bit to get started.

Tamaqua will be the first team to hit the water, hosting Salisbury in a non-league meet Saturday morning. The Schuylkill League slate begins Tuesday with a pair of dual meets.

Here’s a look at the top issues involving Schuylkill League swimmers and divers heading into the now 2021 season:

The Schuylkill League was proactive with its swimming schedule, originally slating the league season to start Tuesday, Jan. 5, and continue through Tuesday, Feb. 4.

Following the three-week shutdown, the Schuylkill League was able to keep its 10-meet dual schedule by just moving the first two dates to the end of the season.

The revised schedule features dual meets every Tuesday and Thursday from Tuesday, Jan. 12, through Thursday, Feb. 11.

Non-league meets are few and far between, with only four officially scheduled to this point.

Schuylkill Haven will have a delayed start due to COVID-19 cases before the shutdown, as the Hurricanes didn’t complete the PIAA’s required amount of preseason practices. The Hurricanes’ first meet will be Jan. 19 against Blue Mountain.

All three events were not only opportunities for area swimmers to showcase their talent and win medals, but post quality times against good competition to qualify or improve seeding for districts.

“I’m disappointed that it’s not going to happen this season,” Blue Mountain coach Rob Marra said of the league meet. “Our athletes use that meet as a way to get last-minute district cuts, drop time individually and in relays to seed higher at districts, and to get a chance to have fun swimming events they may not always get to swim.

“From a league standpoint, it was often the only chance some independent athletes had to swim against others in our league prior to the district meet. It was always something that brought our league together and provided our athletes a chance to be recognized locally for all their hard work.”

Added Mahanoy Area coach Darren Kline: “The sprint meet and Schuylkill League championships really give a small school that doesn’t have the numbers to compete for a team championship a chance for recognition. We will also miss the level of competition that those meets bring.”

Besides the missed opportunities to post times and go head-to-head with good competition, the elimination of the individual swimming and diving championships took away the best thing the Schuylkill League does during every season — recognize all of its swimmers and divers.

It has become an annual tradition for the Schuylkill League to honor all of its senior student-athletes at the league meet, recognize retirements or other noteworthy accomplishments and present the dual-meet championship trophies to the winning teams.

“The cancellation of the league meet is the biggest loss for the swimming and diving community locally,” Hampford said. “Both the sprint meet and the SIAL league meet have become huge casualties of the pandemic.”

The 2019-20 Republican Herald Boys’ Swimmer of the Year, Van Orden won District 11 gold in both the 200-yard freestyle and 100 freestyle and enters this season looking to reach states for a fourth straight time.

Pottsville and Tamaqua could challenge the Eagles for the top spot, but lack the depth and experience that Blue Mountain has. 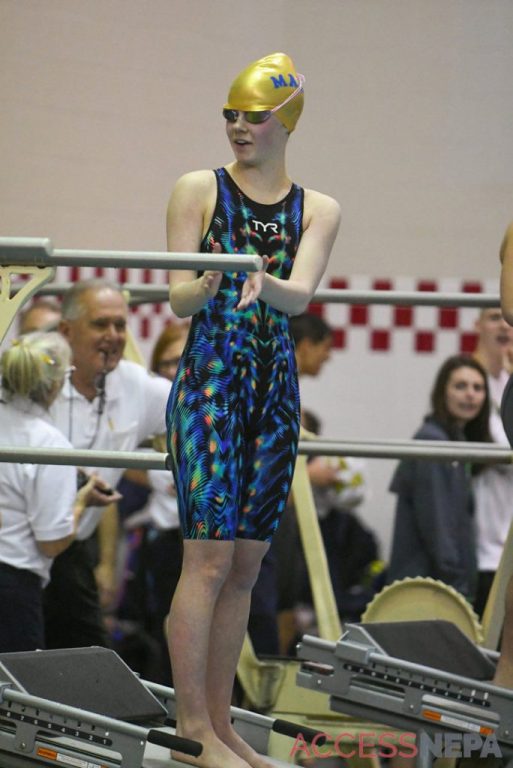 JACQUELINE DORMER / STAFF PHOTOGRAPHER
Marian’s Maddie Dando prepares to compete in the 200-yard IM during the District 11 Class AA Swimming Championships at Parkland. A senior bound for St. Francis (Pa.), Dando will attempt to qualify for states for the fourth straight season.

The biggest news on the girls’ side is the absence of 2020 Republican Herald All-Area Girls’ Swimmer of the Year Olivia Haas of Blue Mountain, who decided to skip the swim season to compete in indoor track.

The move comes as no surprise as Haas, who won the PIAA Class AA cross country championship last fall, had hinted at it when named the Republican Herald’s Female Athlete of the Year in June.

Like the boys, the Schuylkill League is loaded with talented girls’ swimmers, as 11 of the 13 All-Area selections and three honorable mention picks return.

After competing as an independent with Panther Valley the past two seasons, Zimmerman has transferred to Schuylkill Haven for her junior season.

Numbers are up across the Schuylkill League girls’ circuit, with 84 swimmers and divers among the six dual-meet teams and three independents — Dando, Newton and Panther Valley senior Jacqueline Kokinda.

The shutdown comes at the height of the training schedule for high school swimmers, as the holidays are when coaches ramp up their workouts to improve swimmers’ strength and endurance.

Locally, swimmers had roughly three weeks in the pool for preseason practice before the shutdown, but it will be tough to rebound after three weeks out of the water. The condensed dual-meet schedule also cuts into valuable practice time, especially when you consider days will be lost due to winter weather.

Most of the coaches consulted for this preview said their swimmers have done lots of online dry-land training workouts during the shutdown to improve physical conditioning.

More importantly, many said they’ve preached staying positive. After the adversity Schuylkill League swimmers have faced over the past 10 months, having a positive attitude is the best approach.

“The one thing our coaching staff has really been focusing on this year is keeping the kids optimistic and motivated,” Tamaqua coach Jen Paisley said. “I think we all realize that we need to be grateful for every day we can get in the water and do something good for our bodies, whether it results in a competition season or not.

“We are really hopeful we will get the chance to compete, but I feel like we’ve seen a lot of disappointment over the last few months, that we also need to keep perspective that it just may not work out. For now, we are taking each day as it comes, practicing hard, having fun and thankful for some sense of normalcy right now.

“It is definitely not going to be your typical season, because I don’t think anyone is going to come into it with the training and preparation we normally would, so we are just going to do our best with what we have.”