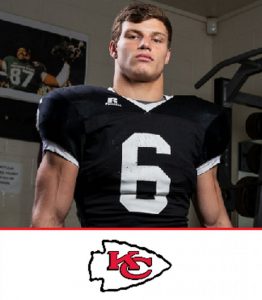 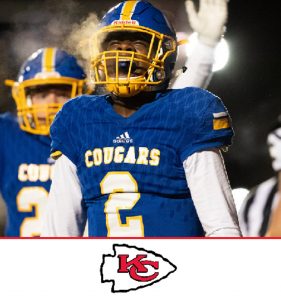 Not a huge surprise that this group all went with Kansas City and its high-powered offense. These are the guys who piled up huge numbers themselves this season.

“I am going with the Chiefs. My mom’s a 49ers fan and none of that stuff is getting hung in my house.”

“Because of the level Mahomes has been playing at. His wide receiver corps, as well as his tight end, are lights out. The Chiefs defense has a great secondary, which I believe will cause Garoppolo to have turnovers.”

“Andy Reid has a lot of experience in big games and that will help. The Niners have a great defense, but I think Patrick Mahomes and Andy Reid will out play and coutcoach Jimmy G and Shanahan.”

“I feel like they have too much offense for the 49ers defense.”

Interestingly, when you consider Kansas City’s wide-open passing attack and its dynamic corps of receivers, the All-Region group all went with San Francisco in the big game.

“Because they play tough and physical.”

“They have a very effective offense, but their defense makes big plays and defense wins games.”

“Defense wins championships and the 49ers have the better defense.”

“Their defense will be able to hold against the Chiefs offense. And the Niners offense is no joke.”

Four of the five linemen who earned All-Region honors selected the 49ers. And their reasons won’t surprise anyone considering how well San Francisco has run the ball this postseason behind its punishing offensive line.

“It’s going to be a showdown between the best offense vs. defense and they both really don’t have Super Bowl experience, but head coach Andy Reid is a great coach and I believe the Chiefs offense is too high powered and can score a lot. But I believe it’s a close game and I’m going for the Chiefs all the way.”

“Their downhill run game and their defensive line will make the difference and will get pressure on Mahomes.”

“I think the 49ers are going to absolutely destroy the Chiefs. 1. Jimmy G is money. 2. The defense has a bunch of young stallions. 3. They have developed a great running game. 4. Stronger, smarter, faster.”

“George Kittle is unstoppable both catching and blocking, and Nick Bosa is a force along an unstoppable D-line.”

“They have better big guys up front.”

In a similar vote, five of the six linemen selected on defense to the All-Region team chose San Francisco and its dominant defensive front led by rookie Nick Bosa.

That means the 49ers received nine of the 11 picks from our best guys in the trenches.

“They have a more balanced offense, plus I would like to see Andy Reid win a Super Bowl.”

“The 49ers defense is solid and the Chiefs can’t stop the run.”

“Their running attack on offense last week in the NFC Championship game they showed it against the Packers that they could run zone plays and long traps, despite the Packers defense having a stacked box for the majority of the game, which allowed Raheem Mostert to have insane numbers. You also can’t forget about their top-ranked defense.”

“I just feel that with their run game and defense that the Chiefs won’t be able to keep up. Mahomes will be busy running from Bosa to keep the offense going and the 49ers will just keep pulling ahead. Also even if the Chiefs stop the run, I think Garoppolo will be able to light up their secondary with Samual and Kittle.”

“I want the Chiefs to win, but I think the 49ers are going to win because their defense is very physical and their offense can hurt you many different ways.”

Two of the three linebackers picked Kansas City. Player of the Year Jason Henderson and Tucker Johnson think the Chiefs have too much firepower, while Colin Holzman is sticking with the defense of the 49ers.

“I think that the Chiefs are going to win the Super Bowl, because they have more weapons than the 49ers. I don’t think the 49ers have the personnel to matchup with the Chiefs for a full game.”

“Mahomes is an animal.”

“I believe the 49ers will win because of their run game and outstanding front four and defense.”

Maybe these guys have a good idea of how difficult it is to cover in this day-and-age of NFL football.

“Patrick Mahomes has a little over 4,000 passing yards to only five interceptions, while having a lot of speed on the outside. I think the 49ers defense is going to have a tough time stopping Mahomes.”

“Chiefs’ offense is too explosive for the 49ers defense.”

“Patrick Mahomes is just simply too good to stop at the moment.”

“The Chiefs have too much team speed, but I think it will be a great game.”

This group is split with two picks for each team.

“San Francisco’s defense has been very solid, especially in the pass rush and if anyone can stop the Chiefs offense, it’s them.”

“I don’t think the 49ers have any answer for Mahomes. Besides all of that, the Chiefs always come out on top.”

“The Chiefs showed they can stop the run game against the Titans.”

“Too much young talent. Too powerful as an all-around team.”

The Times-Tribune All-Region teams gives a slight edge to the San Francisco 49ers.

That doesn’t necessarily bode well for 49ers fans, however.

Three of the four All-Region players who picked last year’s game had the Rams as the winner. Only Jason Henderson had the game correct with the Patriots. Dunmore’s Steve Borgia chose the Patriots to beat the Eagles two years ago.