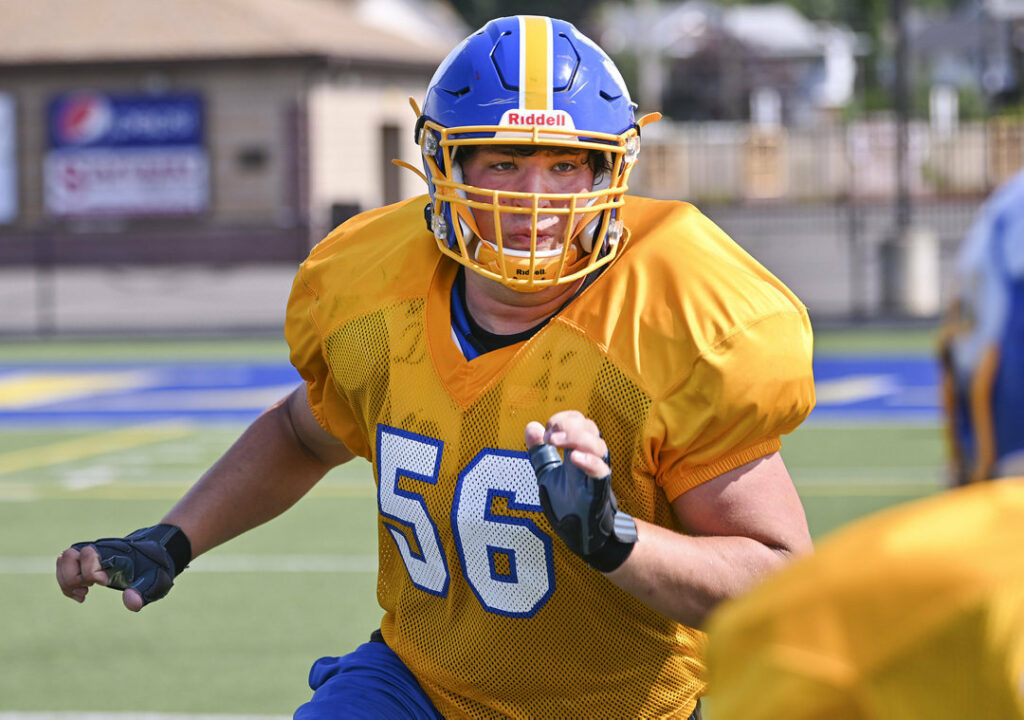 A second straight night of thunderstorms saturated the area Wednesday night, but the football Gods are working wonders for teams as they battle through the heat acclimatization period.

Remember, no scrimmages this weekend. Next Saturday is the first official week that teams can go head-to-head with other teams. There are some intriguing match ups to say the least, but I also want to caution fans that scrimmages are practices. Many of the star players will see limited action, and coaches keep things very vanilla. That being said, there will still be a tidal wave of talent “evaluators” out there who will break down every single snap like they were employed on College GameDay on ESPN.

Any way, let’s get back to the tour.

Thursday marks Day 4 and I took a short trip to start to John Henzes/Veterans Memorial Stadium and had a nice visit with the Valley View Cougars staff. Then, after a stop for my lunch (a tasteless cup of yogurt, again a discussion for another time), I was back on the road to visit Old Forge.

AROUND THE CAMPS RECAP

In case you have missed the first two visits you can visit thetimes-tribune.com

Visiting the Cougars is always a great time. Through the years, if you do a job like this, you forge a lot of relationships. The coaches at Valley View are all great guys and help make the AROUND THE CAMPS tour work. They formulate the practice around my arrival, and they will run plays that highlight the player who I need to focus my iPhone on for highlights and video.

I had a chance to check out the renovated locker room. And above all of the bells and whistles of what is a first-class facility, are the most important signs. Those are the ones that stress and acknowledge the tradition of this program.

This season, Valley View will honor the 50 teams that came before them by wearing a gold 50 inside the white paw on the blue helmet.

Valley View formed after the jointure of Blakely, Archbald and Jessup High Schools. The first team hit the field in 1969 and promptly won the Big 11 championship and started one of the most celebrated programs in state history. 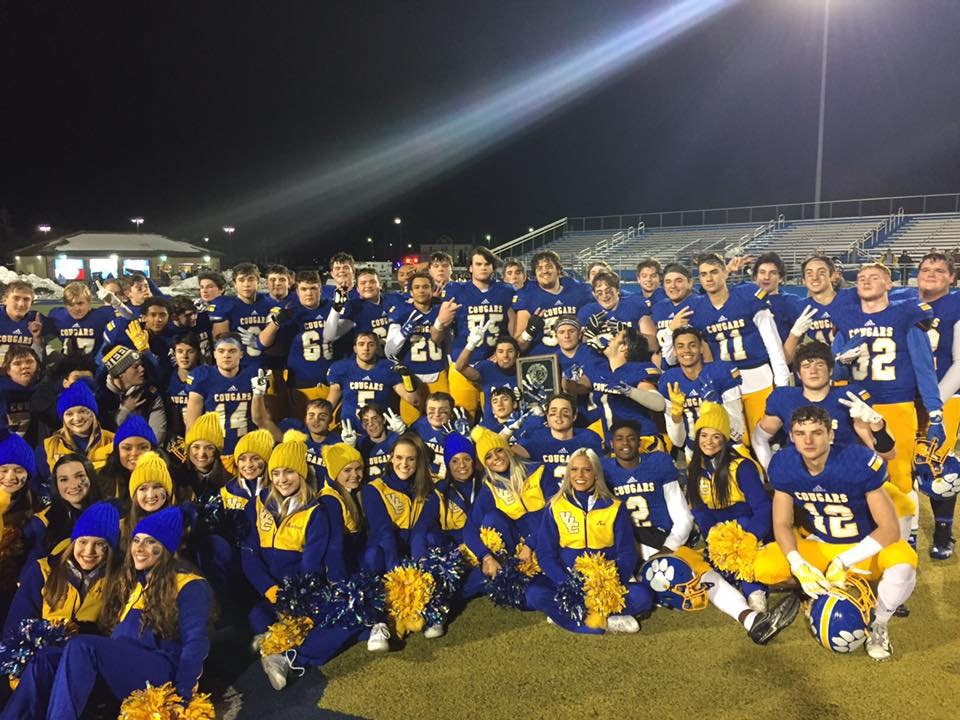 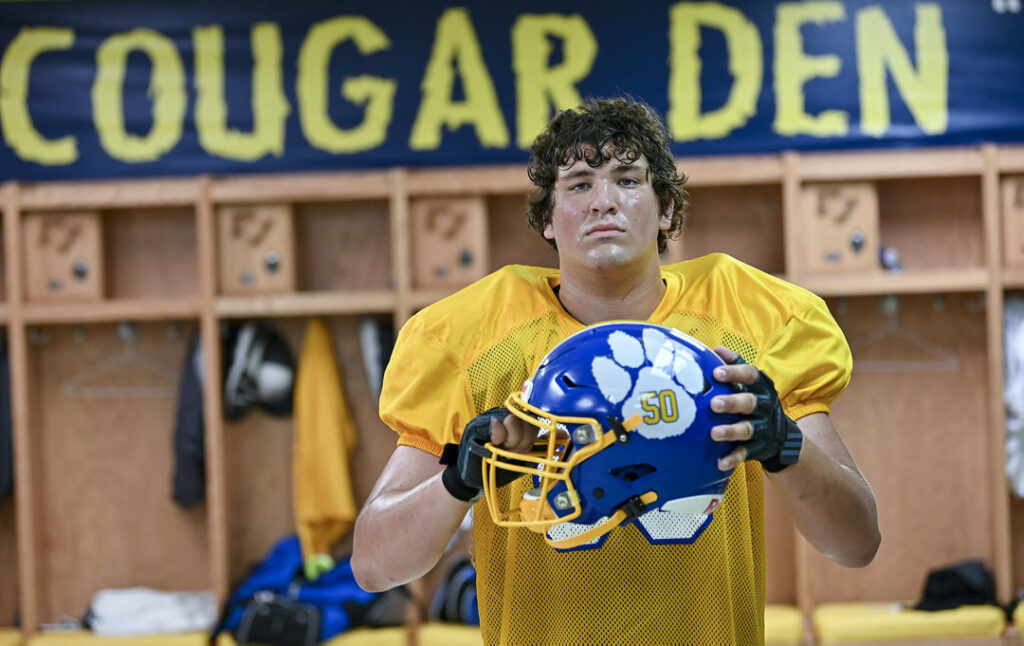 Shnipes is entering his third year as a starting tackle for the Cougars.

In the 2017 and 2018 seasons, Valley View has had one of the most productive rushing attacks in the Lackawanna Football Conference. The

AROUND THE CAMPS: Day 4, Visit No. 1 – Valley View Cougars

Posted by Joby Fawcett, The Times-Tribune on Thursday, August 8, 2019

When we arrived at Old Forge, there was a vicious, almost unrelenting downpour and the Blue Devils even debated having to move their session indoors.

But the skies cleared and the sun came back out before its decent below the horizon and Old Forge had its practice. Leading the charge into the softened turf was Colin Holzman, who is changing his game day number from 32 to 4.

Because Brendan Mozeleski, the last player to wear the number asked him to, and because it’s an honor to do so. 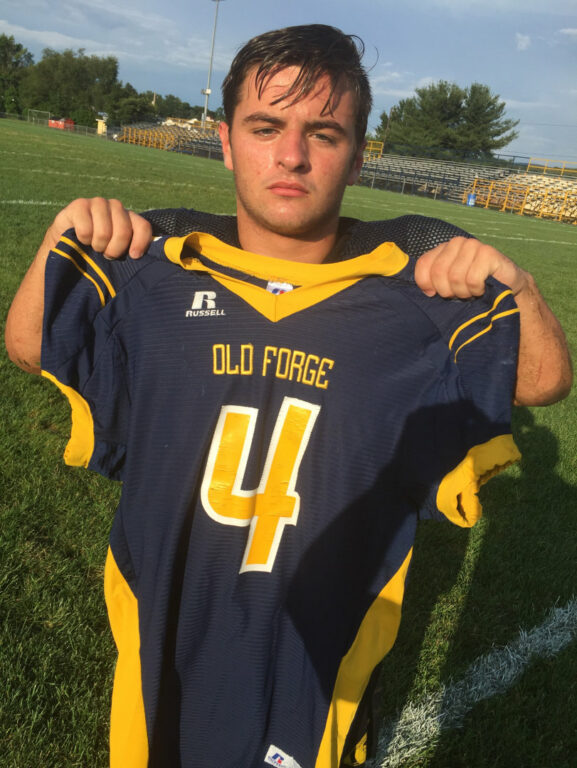 WHY THE NO. 4 IS SO IMPORTANT AT OLD FORGE

It chokes him up just to say her name.
Shane Schuback, the powerfully built senior tight end and linebacker for Old Forge, breaks down as he thinks of all that his aunt has missed. 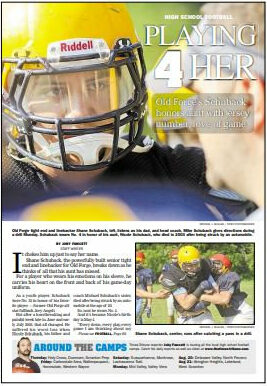 For a player who wears his emotions on his sleeve, he carries his heart on the front and back of his game-day uniform.
As a youth player, Schuback wore No. 33 in honor of his favorite player — former Old Forge all-star fullback Joey Angeli.
But after a heartbreaking and painful week late in June and early July 2003, that all changed. He suffered his worst loss when Nicole Schuback, his father and coach Michael Schuback’s sister, died after being struck by an automobile at the age of 20.
So, now, he wears No. 4.
And it’s because Nicole’s birthday is May 4.
“Every down, every play, every game I am thinking about my Aunt Nicole,” Shane said. “She’s the reason why I started playing football.
“That carries me every game, every play.”
In his final season, Shane is among the top returning players in the state.
He was an All-Region linebacker who terrorizes opposing offenses. It’s been that way for three seasons and Monday he began his final two-a-day camp.
His goals and expectations of himself are high as he aims to lead the Blue Devils to another Lackawanna Football Conference Division III title and back to the District 2 Class A championship game.
And he is driven to success by the memory of Nicole.
“It impacted me a lot,” Shane said of her death. “I really didn’t know what was going on. I got a hint and as I got older I kind of realized how tragic an accident it was.
“It hurt.”
After the number change, Shane has played inspired football.
He’s a tenacious player with size and strength at 6-foot-1, 225 pounds that has him on the recruiting radar.
“When I got older, I was going to start wearing it for her,” Shane said. “She’s not around. I know she would have done anything for me. I put my best effort on the field for her.”
It’s that relentless attitude and refusal to be denied that makes his father the most proud.
“It’s a great inspiration to me as his coach and as his father, knowing he treasures the memory of my sister,” he said. “I’m starting to realize for the first time as a coach that I am a parent too.
“I really feel how special this is.” 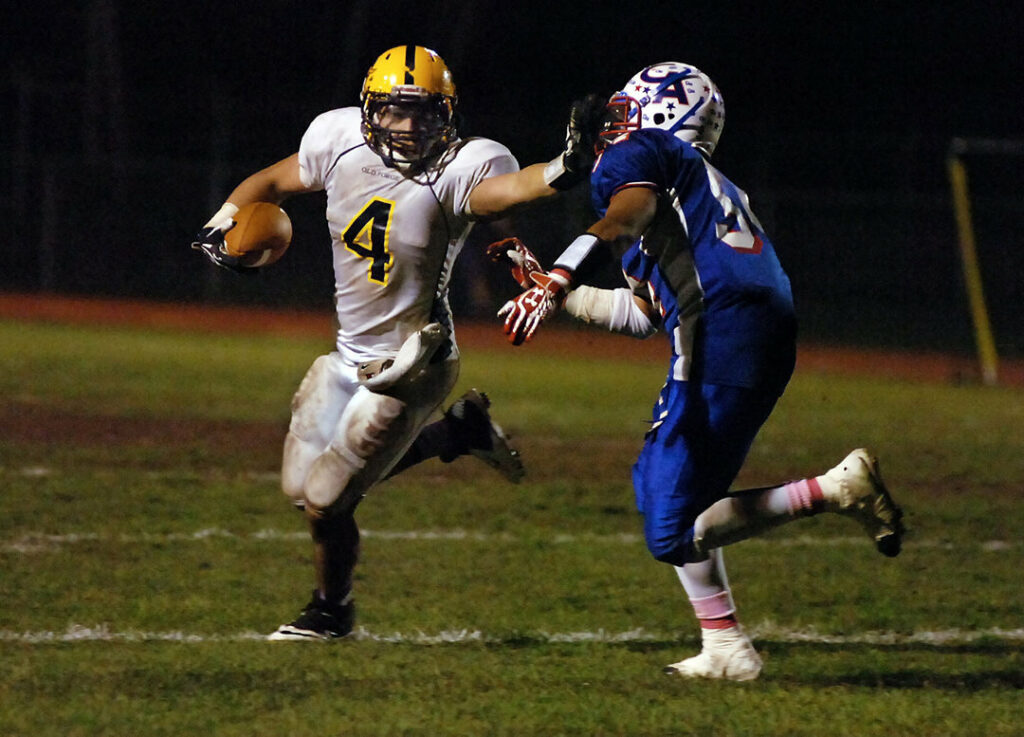 As a freshman, Brendan Mozeleski knew he had massive shoes to fill as a linebacker at Old Forge.

Then, he received all the motivation he needed.
Shane Schuback, The Times-Tribune Defensive Player of the Year, a season earlier, took the young player who would take his place in the lineup aside, put his arm around him, and handed him jersey No. 4.
To this day, the intense heart of the Old Forge defense gets choked up when thinking about the moment.
It’s one that drives him to pour everything he has into being the player who is carrying on the tradition of hard-nosed players for the Blue Devils. 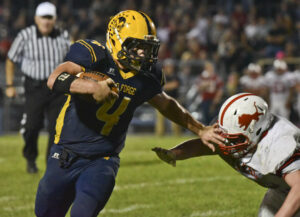 This week, Mozeleski will lead the team into the third annual RailRiders Bowl at PNC Field on Saturday night at 7, wearing that familiar number and carrying the mantel proudly passed down to him.
“I take a lot of pride in wearing that number,” Mozeleski said. “Shane gave me that number. He is like a mentor to me. We are really close.”
During his first playing days as a member of the Old Forge Junior Devils program, Mozeleski looked up to those who came before him.
While he developed his skills and passion for the game, Old Forge won championship after championship and prided itself on having physical players and a desire to win against all odds.
They are characteristics Mozeleski inherited by being around the team.
“Growing up, I had Anthony Pero (who had 290 career tackles) and Shane to look up to,” Mozeleski, 17, said. “With Shane, I began to realize what this game could do for you. Going to the football games and seeing the town support those guys. It’s just a special thing to be a part of in Old Forge.
“We are treated like Kings.”
As an eighth-grader, he watched, studied and admired the two all-state linebackers, Jorden Sekol and Schuback, and knew once their march to the PIAA Class A final in 2013 ended, it would be up to him to not let this tradition end.
By receiving Schuback’s No. 4 jersey, he also understands the responsibility that comes with wearing it.
Schuback chose that number in honor of his aunt, Nicole, who died tragically in 2003 after being struck by an automobile at the age of 20. Her birthday is May 4.

Posted by Joby Fawcett, The Times-Tribune on Thursday, August 8, 2019

Abington Heights at Lakeland, 10 AM

Mid Valley at West Scranton, 10 AM

Dallas at Dunmore, 10 AM

Honesdale at Hanover Area, 10 AM

North Pocono at Old Forge, 10 AM

Valley View at Riverside, 10 AM

Athens at Susquehanna, 10 AM

Tunkhannock at Carbondale Area, 10 AM

Bethlehem Liberty at Delaware Valley, 11 AM

Towanda at Montrose, 11 AM