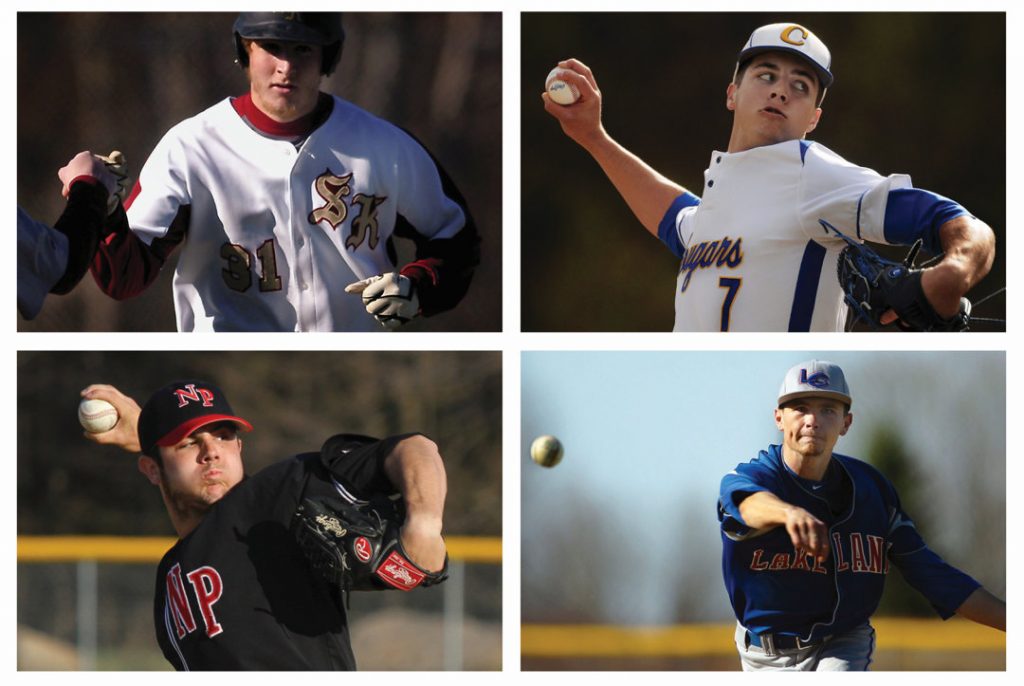 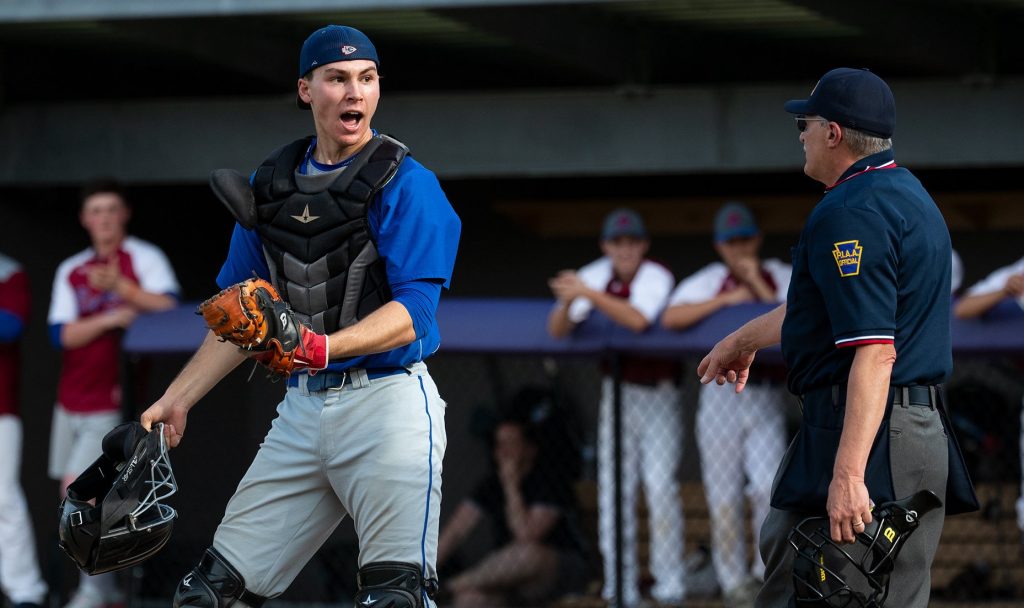 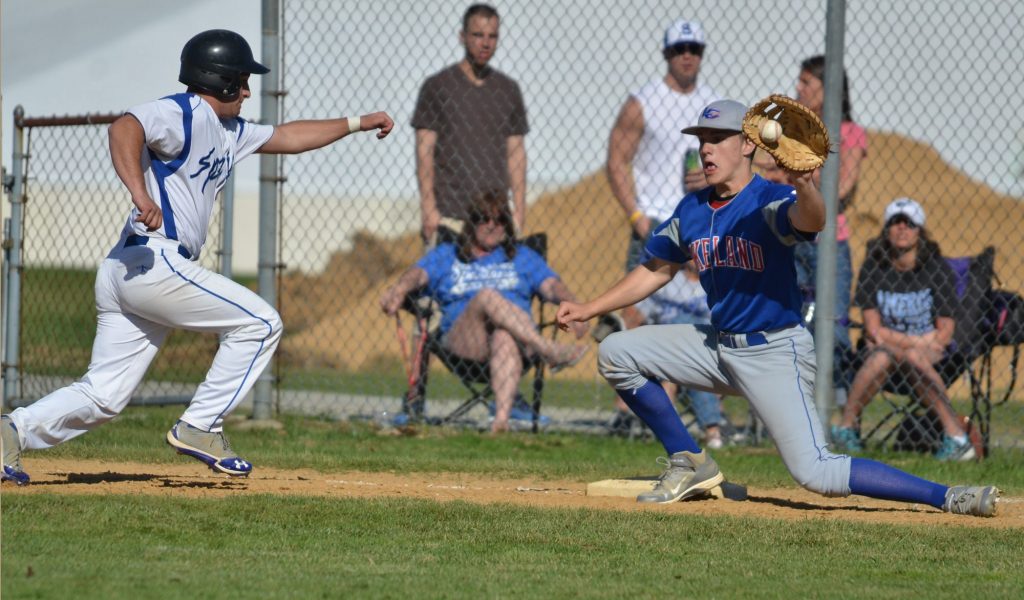 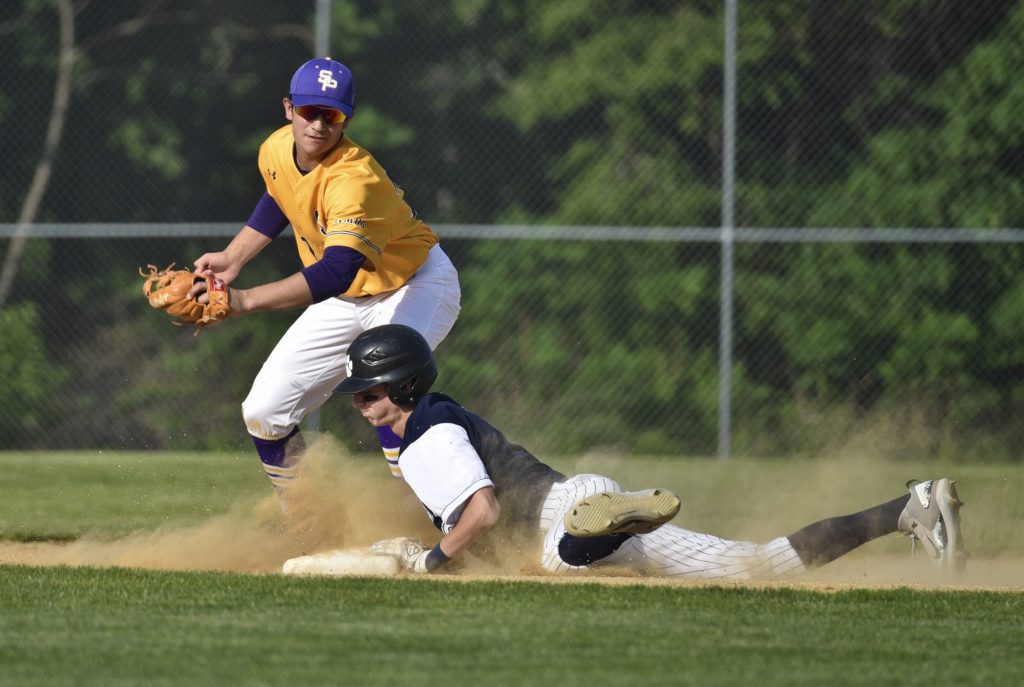 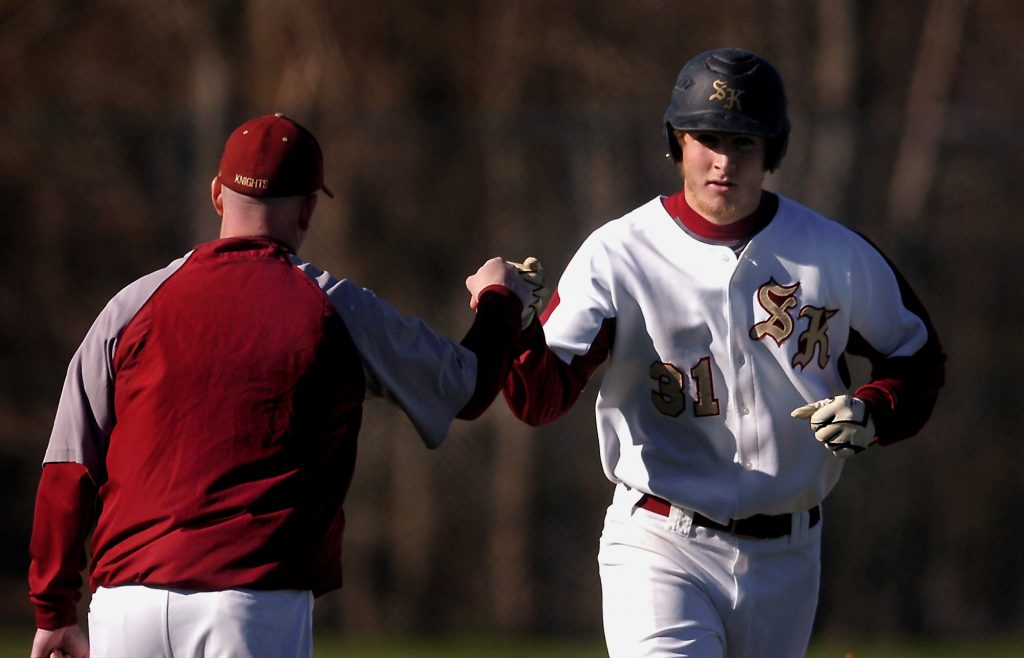 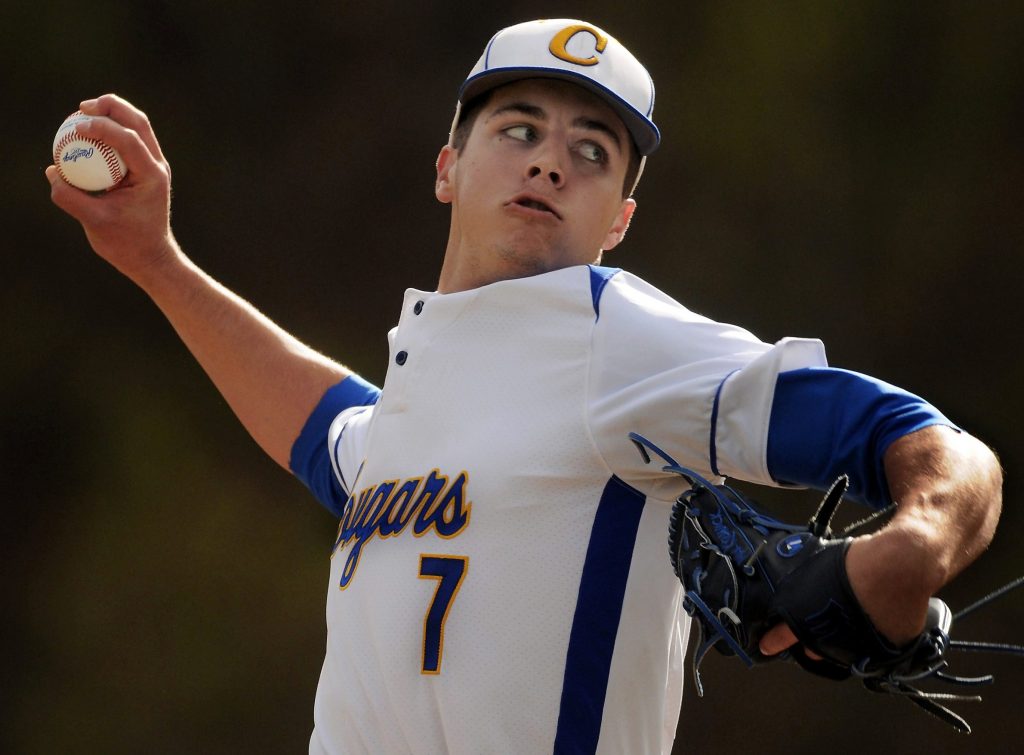 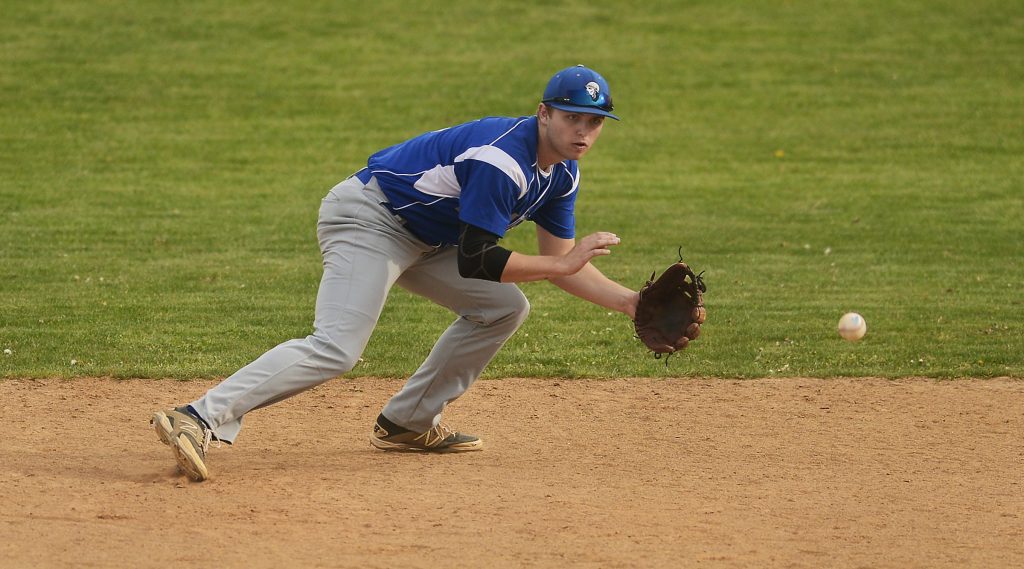 Here’s my ballot for the Lackawanna League All-Decade baseball team. I had the high school beat for the 2012-2017 seasons.

Also considered: Jake Mastillo, North Pocono; Zach Klapak, Delaware Valley; James Blevins, Lakeland
Thoughts: This category was close, but also not too close. Retzbach had some of the best offensive numbers of the decade — .396, 82 hits, 79 RBIs, 26 extra-base hits — and was also great on defense. … Mastillo was solid all around, Klapak had crazy pop and a really good arm, and I’ll never forget Blevins powering Lakeland to a district title following the death of his dad.

Also considered: Jimmy Fayocavitz, Abington Heights; Chris Rebar, Mid Valley, Dixon Black, Valley View.
Thoughts: Runco got my top vote here. Dynamic on offense for a North Pocono team that had a lot of big bats. Went on to become Fordham’s Hit King — his 242 hits there beat the previous record by one — and is also the Rams’ career leader in games played and finished second in stolen bases. … Missed Bochicchio’s high school career by one year, but I’ve heard he could really swing it. His career only covered two years of the decade, but he still batted .541 with 53 hits, 11 doubles, three triples and 11 homers. … Stetzar was one of the top all-around players I saw, especially on defense. Could have made the team as a pitcher, too. … Cimini and Granet earned starting spots as freshmen and played at very high levels for four years. … Fayocavitz might not have the offensive numbers of some of the other candidates, but no one could change a game quite like the Comets’ scrappy leadoff hitter.

Also considered: Ben Grochowski, Old Forge; Brendan Kucharski, Mid Valley
Thoughts: Nelson edges Hayes for my top vote here. Both had crazy numbers. Nelson batted .418, and of his 79 hits, 37 went for extra bases. Hayes beats him in batting average (.424) and runs (78). Both super competitors, too. … Rebar had 13 triples in the decade. The other 15 guys on the list combined for 26. Went on to a stellar career at Marywood — he’s all over their record books. … I still remember getting the call when I heard about Rivenburgh’s tragic death. Great kid, great player. Made an impact throughout the league. … Fifth spot could have gone to either of those three: Thomas, Grochowski or Kucharski. Thomas got the nod because of his 29 extra-base hits.

Also considered: Ray Grapsy, North Pocono; Lawrence Cicileo, Delaware Valley; Brendan Mozeleski, Old Forge
Thoughts: Even though his freshman year didn’t count toward this decade, Joe McCarthy nearly led the outfielders on the ballot in hits. Batted .419. Had 24 extra-base hits. Then, a National Championship in college, and a Governors’ Cup and PCL Championship in pro ball. Easy call. … Somehow, I only picked Jake McCarthy for one All-Region team in his high school career. He’ll (rightly) hold that over me the rest of his career. … Walsh was one of my favorite players to watch — .443 average, 70 hits, 18 extra-base hits, stolen bases and a superb defender in right field. Hit a walk-off homer at PNC Field in the Trojans’ 1-0 win over Valley View for the District 2 Class 3A Championship in 2016. Game of the decade? … Gaetano made three All-Region teams and slugged 36 extra-base hits, including 11 homers. … Fifth spot could have gone a bunch of ways, but Darrow gets the nod. Batting average isn’t everything, but when it’s .478 — for a career — it’s certainly something.

Also considered: Oh so many, but since I knew the ballots, I used the utility spots to make sure I was able to get most everyone represented. That’s where you’ll find Eric Grabowski of Lakeland, Tyler Ksiazek of Abington Heights and Nate Rolka of Lackawanna Trail. Also considered Ryan Deom, North Pocono; Cory Wall, North Pocono; Johnny Kranick, Valley View; Brad Richards, Lakeland; and on, and on, and on. There were, uh, a lot of good pitchers this decade.
Thoughts: Kranick had a sparkling 1.169 ERA for his career, with 16 wins and 201 strikeouts. He went on to be drafted by the Pirates and turned pro out of high school. (As a sidenote: He also batted .426 with 92 hits, 24 doubles, one triple, three homers.) Most dominant arm of the decade. … I was a little surprised by Nelson’s career ERA (4.17), but I think most of the damage came early on. His 20 wins are second to only Ksiazek’s 21 for pitchers on this list, and his 221 strikeouts trail Hodorovich (240) and Rolka (316). Nelson touched the 90s when not many others in the league were in that stratosphere. … Manasek’s senior year was one of the best seasons of the decade: 7-0, 0.28 ERA, 0.735 WHIP, one earned run in 18.1 postseason innings. … Black probably threw the fewest innings out of anyone I picked, but by his senior year, he made it look easy on the mound. Still racked up 123 strikeouts and had a 1.19 ERA. He’ll be on pro baseball watch lists after dominating in the Cape Cod League as a freshman at Lehigh. … Hodorovich had eye-popping numbers: 19 wins, 240 strikeouts and a 1.56 ERA. He’s continuing the pipeline from Northeast Pennsylvania to the University of Virginia. … I could make cases for, like, 10 other guys, but there’s only so many spots. I will say Deom’s freshman year at North Pocono (6-1, 0.41 ERA, one earned run in 25.1 postseason innings) has to rank as one of the best seasons of the decade.

Also considered: Cole Stetzar, West Scranton; Jake Decker, Blue Ridge; R.J. Kuruts, Forest City; Austin Gilpin, Wallenpaupack; Collin Ferguson, Valley View.
Thoughts: I’ve been thinking about who the player of the decade would be, and I think — I think — I have it narrowed down to four possibilities. Scranton’s Joe McCarthy, Valley View’s Max Kranick, North Pocono’s Billy Nelson and my top utility vote-getter, Lakeland’s Grabowski. At the plate, Grabowski batted .455 with 105 hits — next closest for the decade was Ksiazek at 94 — including 28 doubles, 14 triples and six home runs. He drove in 69 runs and scored 95. On the mound, he earned 17 wins, struck out 166 and had a 2.25 ERA. After two huge years at Lackawanna College, he went on to a successful career at Liberty University, where he continued to pitch and hit. … Already mentioned Ksiazek’s 94 hits. He finished with a .414 average and a decade-best 21 wins. He struck out 188 and had a 1.58 ERA. … Want a flashy stat? How about Rolka’s 316 strikeouts? Three. Hundred. Six. Teen. Took a little while for the Lions ace to lock in, but once he did, hitters had little chance to catch up to his stuff. Just for good measure, he also batted .417 with 70 hits.