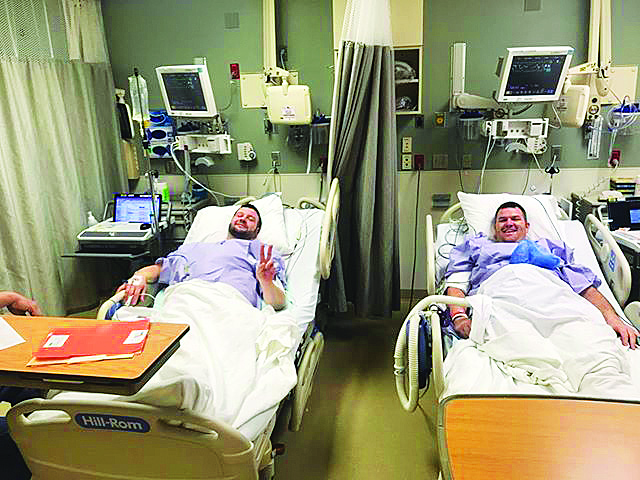 By definition, it’s a friendship. In reality, it’s a brotherhood, forged in the trenches on the Lakeland High School football field and cemented long after their days there ended.

Last month Miller, 32, was in need of a transplant for a failing kidney and DeMark gave him the gift of life.

They endured a nearly four-hour surgery, and after a short stay in the hospital, both are on the road to recovery.

Both planning to enjoy and cherish a future Miller wasn’t certain he’d have.

As elementary school students, Miller and DeMark became friends as they were often the biggest students in their class.

As high school football players, their relationship grew and their pursuits as linemen enriched that bond.

Intimidating and fierce, physical and strong, their power defined a championship era for Lakeland from 2002 to 2004.

At 6-foot-6, 275 pounds, Miller was a force as a two-way tackle. A three-year starter at center, DeMark checked in at 6-2, 270 pounds. They earned All-Region honors as seniors, and when Chiefs running backs Colin Striefsky and Joe Tuzze each rushed for more than 1,000 yards on the way to a 12-1 record, it was aided in no small part by that dominant offensive line that left an indelible mark on the Lackawanna Football Conference.

“We had a special team,” Miller said. “We lifted together every day. We were always working out and running as a team. We had 30 to 40 kids there, a whole team commitment to winning. But most of all, we were always close.

“We just are always there for each other.”

Not long after graduation, Miller had a life-changing event.

He was injured in an accident while working on his family’s farm in Scott Twp. and had his right leg amputated just above the knee. He was only 21 years old.

He coped with the mental struggle and eventual recovery with a prosthetic limb thanks to the outpouring of love and support he received from his family and friends.

“It was bad, especially that summer,” Miller said. “I spent 21 or 23 days in the hospital. Honestly, once I got my prosthetic, though, I had all my friends around me and I never missed a beat. It never bothered me. I never got down or felt sorry for myself.

“It was hard, but I bounced right back and I recovered.”

He would soon face adversity again.

A routine drug test for a job interview revealed high levels of protein in Miller’s blood. After undergoing tests, it was determined his kidneys were working at just 40 percent.

He was diagnosed with immunoglobulin A (IgA) Nephropathy, also known as Berger’s disease. It is a chronic kidney disease that causes inflammation and tissue damage and can lead to end-stage renal failure.

In the short run, he managed with medication and remained patient.

And he lived his life.

While attending former teammate Keith Galinsky’s wedding in 2017, Miller met Steph Mascherino. Miller was a groomsman. Steph was a bridesmaid. They hit it off.

Miller and Mascherino started a long-distance relationship. In the summer of 2018, the Downingtown native moved north, ready to start a life with Miller.

Miller, who works at Cabot Oil and Gas, also upholds his responsibilities on the family farm, where bailing hay for the cows made for exhausting days and long nights for him.

In October, his kidney numbers decreased and his illness progressed. He battled fatigue. Piercing migraines produced violent bouts of vomiting. The once massive athlete who cleared gaping holes in a defense could barely roll out of bed.

“It was just him laying in bed not being able to do anything to help the family at the farm,” Mascherino said. “He is such a big part, feeding cows and doing all of the heavy lifting. We all had to pick up the pieces.

Miller knew the treatment process: Dialysis immediately; a transplant for the long-term. 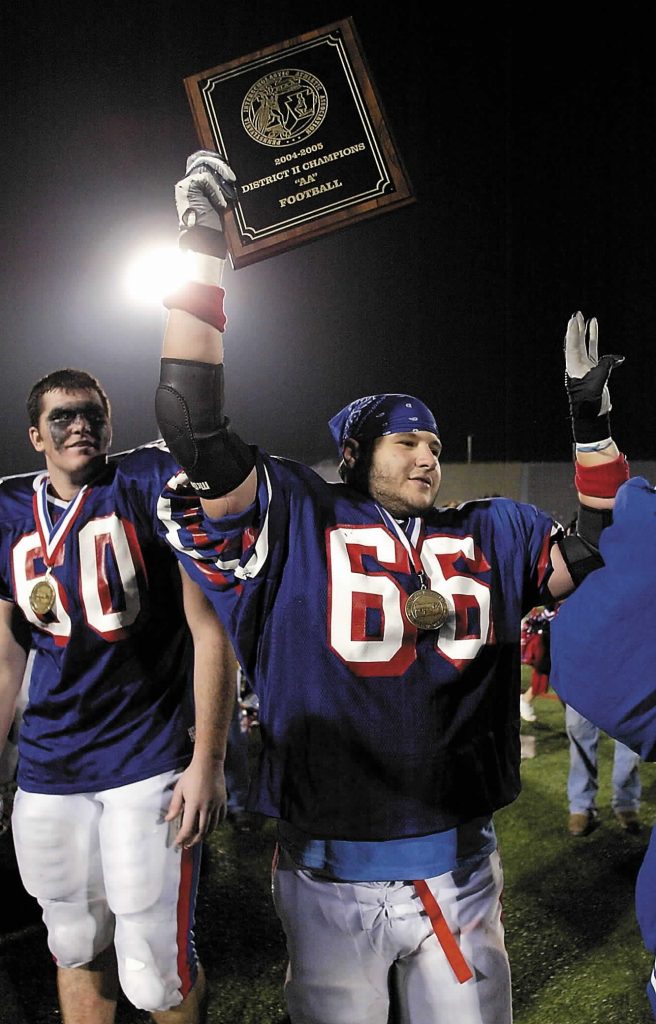 At first, he received dialysis through a peritoneal catheter. There were complications. Then in March, he had a hemodialysis port inserted in his chest and his treatments moved forward.

“We didn’t know how long he could live without getting dialysis, we had to do something,” Mascherino said. “All of us, the family, his parents, his sister, we were beside ourselves. It was terrifying.”

Miller went for dialysis three days a week. The dialysis process cleans the blood by removing waste, salt and extra water, and it keeps chemicals at a safe level, while helping to control blood pressure. The four-hour sessions restored hope for Miller.

His kidney function dipped to 10 percent and a transplant was his last hope.

“I felt kind of crappy all the time,” Miller said. “I felt drained right after dialysis. I never had any energy. The next day maybe I felt a little better, then you are going right back for another treatment.

“It’s a roller coaster and there is no end in sight until you get a transplant.”

Once again, the Lakeland community rallied.

Miller’s sister Kendal created a Facebook page, kidney4kyle, in a plea for potential donors. The family received an overwhelming response. Almost a dozen of the more than 40 volunteers reached the testing stage. But each time it failed to find a match.

“We kept getting our hopes up each time only to get let down,” Mascherino said. “We would go months without hearing anything and he would get worse and more sick. Then we would panic and we would call.

“It was a very trying time.”

During their conversation, DeMark asked about his old friend who he hadn’t seen in a long time.

Things were not going well, she told him, and DeMark wanted to help. He went through six months of testing.

Finally, his results came back positive as a match. He could donate his healthy left kidney, as long as he understood the risk to both the receiver and donor. Those risks include failure or rejection of the organ, bleeding and blood clots, and infection.

“There was never any hesitation,” DeMark, 33, said. “They do put you through a ringer. I had a lot of missed time from work going to Danville for appointments. I was completely healthy, but at the same time there are a lot of rules and I did what I had to and followed them for Kyle and his health. We wanted to get this done right.”

There were also personal and economic tests for DeMark, a father of two daughters with a third child on the way with his wife, Samantha. He is a Union Sheet Metal Worker Local 44 and works for Scranton Electric and Cooling. Post surgery, he needed rest and recovery that would put him on sick leave.

“John was a bulldozer through the whole thing,” Mascherino said. “They want the donor to know what this can do to their body and their family. But he kept saying, Kyle needs it, and you couldn’t talk him out of this.

“He was a superhero.”

“I didn’t know how to thank John,” Miller said. “Just knowing that when I got that call and they scheduled the date, I almost immediately felt better, because it was going to happen.”

On the morning of the surgery, after a restless, anxious night, Miller and his now fiance arrived at Geisinger in Danville. As fate would have it, on the way into the hospital they ran into DeMark and his wife, and Kyle shared a hug with DeMark’s father, John.

“It was a very emotional morning,” Miller said.

After the operation, they had a short, but meaningful reunion. Their broad smiles signaled the collective joy in the recovery room.

“He could only stay for a short time, but it was awesome,” Miller said. “I’m not ashamed to say we cried. There were tears.

“I could not be more thankful.”

“I am pretty laid back,” DeMark said. “I was ready and I had surgeries before, but still it was an exciting day. Just hearing his voice after it was over, you could tell it was a huge weight off his shoulders.” 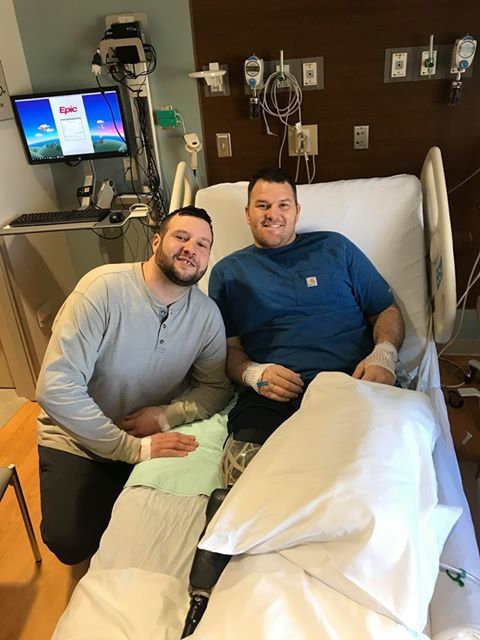 After being released from the hospital, Miller and DeMark returned to home, happy and relieved.

But this story does not have a textbook ending.

Now, they faced another barrier: the coronavirus pandemic.

Already vulnerable during their recoveries, Miller and DeMark are now on high alert. They are doing everything they can to stay healthy by staying safely at home.

Both are doing well, and Mascherino sees a noticeable change in Miller. The couple hopes to keep a scheduled fall wedding date.

“For the most part, he still can’t physically do a lot,” she said. “He is more excited and more energetic. More positive, really. It’s a new chapter for him. It feels like we are back to where we should have been a year and a half ago.”

For DeMark, he has regular appointments with his doctor, and things are going well. He returned to most normal activity. He needs long-range checkups, too.

“My other kidney is functioning fine,” DeMark said. “This is a good feeling. I definitely got a lot out of this as well. Kyle is a great guy. I like to think, if either of my girls needed something like this, someone would help if they could.

Each day is a new beginning for Miller. He takes nothing for granted.

“I feel amazing,” Miller said. “I can’t wait to get out and do what I used to do at work and on the farm. I can’t wait to go golfing with my buddies, go swimming and tubing. I am just happy to get my life back. And it’s all because of John.”