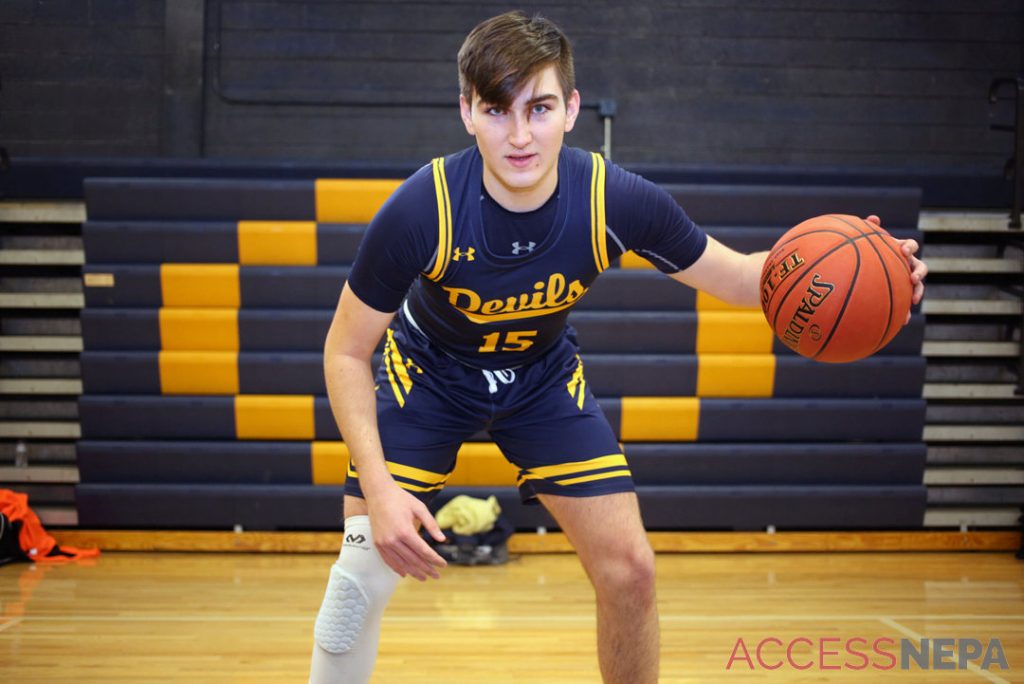 John Giglio knows what it means to fight.

As a kid, he loved sports, even if he didn’t benefit from natural gifts. So the once-undersized, three-sport athlete had to learn the value of patience and hard work, because what he wanted most was to keep playing sports with his friends at Old Forge despite odds that stacked against him.

He didn’t have to look far to find the inspiration.

His father, Bob, a former Blue Devils football lineman, learned he had cancer in his lymph nodes and tonsils at the end of John’s sophomore season. After that, the son watched the man he admired most endure the most challenging sickness all the way to the end of a nearly year-long therapy.

“I never wanted to see my dad like that and I never saw him like that before,” John said. “That was a huge motivation factor to me to better myself for him, so that while he was recovering I was also getting my body better at the same time.

“We were working through life together.”

All the while, John continued his own battle. He had a growth spurt, gave every ounce of effort at practice and, in his final year, earned a spot as Old Forge’s starting center.

While he may never fill the scorebook, his passion and desire at practice makes him a player his teammates and coaches admire.

And his biggest fan supports his son every step of the way.

“It’s just been a pleasure to watch him grow up,” Bob said. “We don’t get to go to the games, but I watch and he is playing great. It makes you proud. He is a class act. He has great grades, he’s a good young man and he’s got some talent there, too.”

He also enjoyed baseball, football and golf. But in those elementary school years all the way through junior high, his classmates started to mature. John remained on the shorter side and described himself as slightly overweight.

But he never missed a practice.

“We started playing in the borough league,” John said. “They were all a lot better at basketball than me at the time. I was a lot shorter and on the heavier side. I just (thought) that I should keep working and stick with this sport.”

Each passing year, John remained committed to carving his place in the Old Forge sports tradition.

He heard the stories from his father, who played center for the Blue Devils in 1974. He also listened as he learned of his uncle, Tony, a football legend in the borough and Hall of Famer at Lafayette College.

While he never got to fully know Tony, who died in 2004, carrying on the legacy of the Giglio name became a priority.

“The name has always been in the back of my head,” John said. “I have always thought about it. I understood what my uncle had done and what my father had done in the sports that they played. I never really knew my uncle, but I always wanted to carry on his legacy and my father’s.

“That was a huge motivation factor that I felt would put me in a great position, and if I motivated myself with that name right, and I was able to carry on at least part of what they did, at least put myself in a position where I was able to (fill) part of their shoes and what they did for the Old Forge community in the past, I felt that I put myself in a great position and I feel like I became a better person and a better player just modeling myself after them.”

His athletic future started to look promising as he grew to 6-foot-3 between his sophomore and junior years. His relentless work ethic paid dividends.

“I didn’t see him much because I would go to work early and be gone all day and he would go to practice or whatever, and then one day, I went from kind of looking down to see him to looking up at him, and he was over 6 feet,” Bob said. “And most of the family really, we aren’t tall, maybe a cousin somewhere is, but here he is over 6 feet.”

Then, his father became ill.

In March 2019, Bob received his diagnosis. He endured seven weeks of chemotherapy and radiation at Thomas Jefferson Hospital in Philadelphia, where he was an in-patient. His weight plummeted from 230 pounds to 150. He got through the most difficult days by reading letters from his children, John, Julian and Meredith, his wife Ann, and with the support of family and friends.

“It was a very scary situation,” Bob said. “But their love is why you want to live.”

Seeing his father sick devastated John, but it also motivated him as he saw a relentless will to survive.

With his father now cancer free, he got back to work more determined than ever. 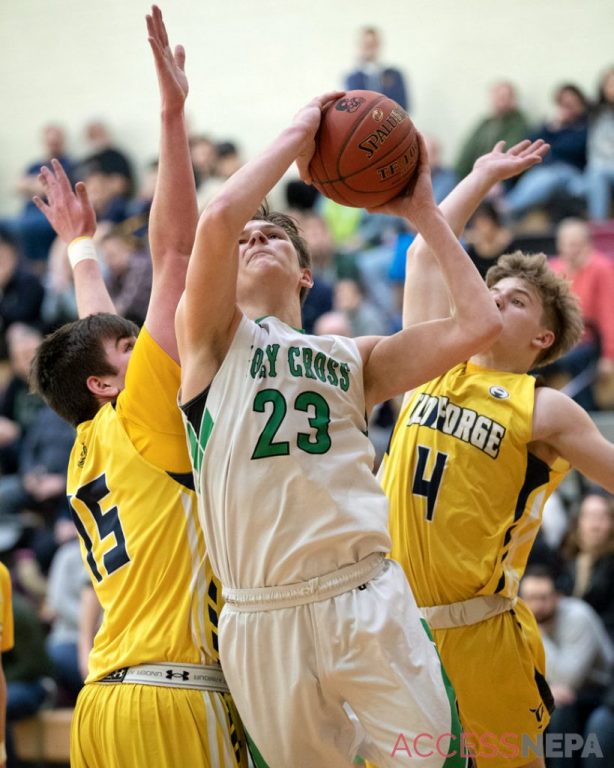 This fall, he played tight end for the District 2 Class 1A champion Blue Devils. When basketball season came around, he emerged as a vocal leader.

John dialed up the intensity after the coronavirus pandemic forced his team and the entire league to shut down through the Christmas season.

“John Giglio is one of those guys, you hope every year that you get a guy like that on your team,” Old Forge coach Jared Yanniello said. “Just seeing him grow up from a 12-year-old kid in seventh grade to the man he is now, is a coach’s dream. I think he is not the guy you are going to see in the paper every night. But he is definitely a guy that we know going into every night, he is going to give us everything he has.

“That goes with his work ethic and the type of person he is and the family he comes from and if he continues to do that stuff, he is going to have a successful career.”

As a member of a team that returned almost its entire starting lineup, John worked his way into the anchor of the defense and a force rebounding the ball. He does everything and anything for a win.

“John is pretty much the voice for our team,” teammate Michael DiGregorio said. “He is pretty much our leader. He’s the one to step in and get on guys. He is a big communicator and he is always willing to help out another teammate. He knows his role. We don’t expect him to score 30 points or anything, but we just need him to do the little things and that’s what he does best.”

This season is moving fast.

Old Forge got off to a rocky start. Despite strong efforts against Holy Cross and Riverside, the Blue Devils took the two favorites in Division III to overtime, they still fell short.

They were denied another win when Mid Valley erased a double-digit deficit.

But through these tough times, which in his opinion pale in comparison to the journey he took to the starting lineup and the road his father took to recovery from cancer, John refuses to lose sight of the goals.

And he will never surrender.

“I just like to do everything that I can do for this team to get us better and get us to that next level of play,” John said. “We have been right there the past couple of games. I really think that if we can elevate our play just another smidge, we can get to that great team that is competing with the best teams in our league, the Lackawanna League, every single night.

“My hopes are a district title. Senior year, it’s our last shot. We always have talked about making it there and we always dreamt of it, but that is what we really need to aim for and push ourselves toward, making Mohegan Sun and winning a district title for our school.”