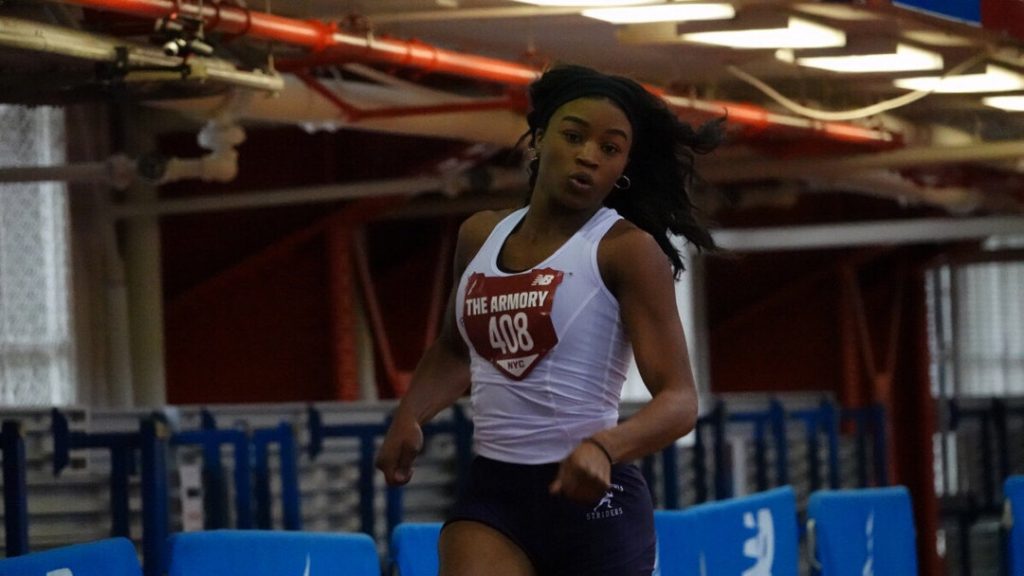 Taliyah Booker refused to let anything stand in the way of reaching her goal.

Not a lost spring of inactivity.

Not a quiet summer.

Not a raging pandemic that threatens to take more of her high school athletic career.

No, the Delaware Valley senior track standout won’t let any negativity tear her down. She trained her body and her mind to conquer months of adversity beyond her control.

Her determination, and an unflappable work ethic, led college coaches to reach out and show interest in her blazing speed.

Thanks to increased workouts, added strength from weight room sessions, and an indoor season where she is leaving quite an impression despite the extended time away from competition, Booker is on the radar of NCAA Division I programs.

That is what drives her to get better and faster despite another shutdown because of the coronavirus pandemic.

She won’t be denied.

“I just always kept my eyes set on the prize,” Booker, 17, said. “I am dedicated to track and field. I want to run and compete in college and I want to also contribute even after I am done to the sport. I am a hard worker who won’t make excuses or let them distract me from my goal. No matter the circumstances that are in front of you, you have to do whatever it takes to achieve what you set for yourself.

“I moved forward and I want more than anything to prove myself to everybody.”

As a sophomore, Booker burst upon the state track scene with an outstanding performance at the District 2 Championships and the PIAA Class 3A Championships.

In May, she posted personal-best times in the 100-meter dash at 12.39 seconds, the 200 in 26.56 and in the 400 with a time of 56.79, which came at Shippensburg University at the state meet. Her effort in the 400 earned a fifth-place medal and stood as the third-best time recorded by a Lackawanna Track Conference athlete in the grueling sprint event.

After proving she could compete at a high level, having her athletic ability open doors for an education in pre-med became her priority.

In the winter indoor season of her junior year, Booker posted a personal-best time of 8.05 in the 60, finished third in the 200 with a time of 26.53 at the Pennsylvania Track and Field Coaches Association Indoor Track Carnival and closed it out with a 58.03 clocking in the 400 at the PTFCA State Meet.

That season catapulted her into the spring where Booker really wanted to make a mark.

But one week into preseason practice, it all went away because of COVID-19. It broke her heart, but not her spirit.

“That was so tough, because my whole approach to the spring was to set times for the recruiting process,” Booker said. “Junior year is the most important for track. I missed out and that was a major disappointment. But, it also really motivated me. I trained a lot harder. I had to change my entire training schedule. “

With her summer schedule also canceled, Booker reached out to AAU coach Malcolm Page from the Philadelphia Striders. She also contacted coach Nick Quaglia, who is an assistant coach for the football team in the fall. Together the two mentors put together a workout routine and she set her sights on the indoor season.

“Right on Day 1 of school, she was at practice,” Quaglia said. “I was coaching football, so we would talk and go over her workout and she would do it out there on the track on her own. I would look over from the practice field to answer any questions she would have, but you would see her pushing and it was amazing to watch how hard she worked.”

That great start put her name on the indoor ranking list by milesplit.com. But when the calendar flipped to November and Booker started rounding into shape, she rocketed among the best sprinters in the state and the country.

At the Nov. 8 meet at The Armory, Booker won the 55 in a state-best time of 7.25. Then, she earned the top time in the state and the country for the early season in the 400 with a time of 55.45. It is a mark that eclipses the best outdoor time run by an LTC athlete, which stands as 56.16 set by Lackawanna Trail’s Lauren Ellsworth in 2011 and is the best run by an LTC athlete in the indoor season.

“I never ran that fast before,” Booker said. “I was proud of the progress I have made. I mean, 55.45, Holy Cow that is a second faster than I ever ran. If I am cutting down a second now, I am hoping for incredible times by March.”

In the interim, she also received a scholarship offer from Towson University, and Penn State, Syracuse and Georgetown reached out to Booker.

With the state shutdown again, Booker moved to virtual learning at Delaware Valley. She visited her sister, Tashae, who lives in New Jersey and trained in a gym there. At home, she battles the frigid air to run outside as often as she can and her next meet, which is at The Armory in New York, is scheduled for Dec. 29.

She is not giving in now. She’s come too far and worked too hard.

“I do need to focus on my other two events now,” Booker said. “Colleges don’t want a one-hit wonder. They want a good athlete who can run across the board. My 400 is up to D-I standards. I have been adjusting sprint mechanics to get those other times down.”

Before the spring season, she intends to finalize her collegiate future. And from there, everything will lead to a quest for a return to the medal stand at the state championships in late May.

“This is what I want,” Booker said. “Missing out on last year was a disappointment. But, I want to go out there and have a great senior year.”