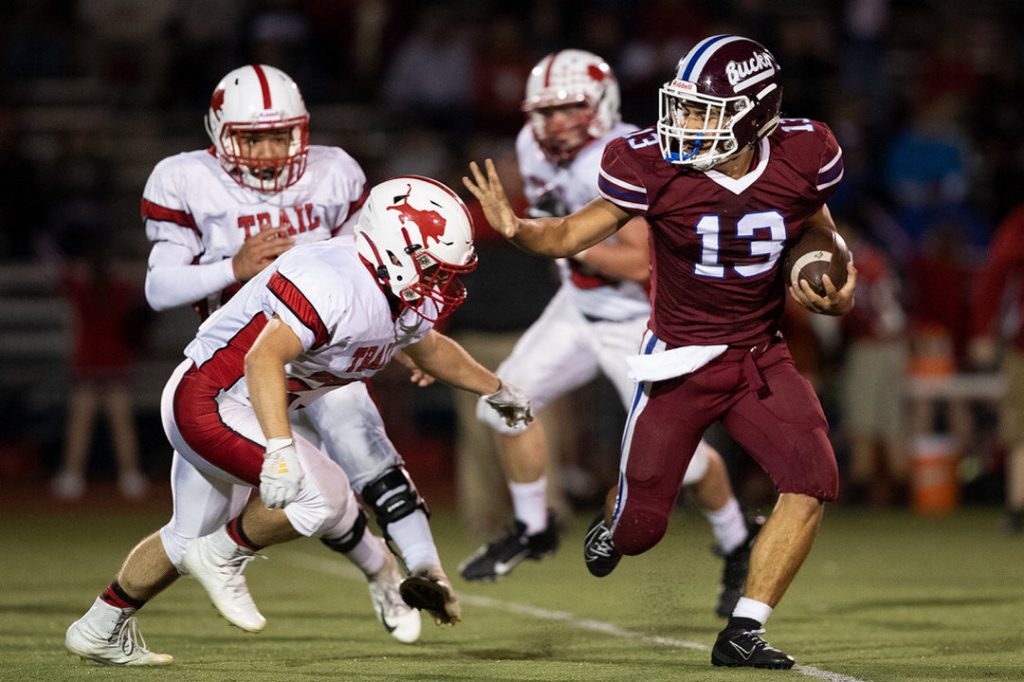 The Dunmore senior completed 3 of 4 passes for 81 yards and a touchdown, ran for 43 yards and another touchdown and had an interception which led to a score in the Bucks’ District 2 Class 2A championship win over Mid Valley.

Family: Terry and Steve are my parents, and Ally and Maria are my sisters.

Others sports you play: Basketball and baseball.

What is it about those guys that you like? Zeke, he’s just an animal. He runs through people. He looks for contact. And Gleyber … they’re dependable guys.

Is there a particular one? It’s a good question. I’ll say Ragnacci’s.

Three people you’d like to have dinner with: Jordan Spieth, Jose Altuve and Dak Prescott.

It didn’t take long for things to start going right for you guys in this game. Was that a relief? Right when we got there at the field house and started getting ready, the energy level and the intensity was really high. I knew right when we got there, that we were going to have a good game. We were going to ball out that day. When we got on the field, I mean, the first drive, we didn’t score, but they didn’t do much on offense the whole game. We really put our best foot forward.

It seemed like you did a little bit of everything in the game. Is that important? I enjoy being involved in all facets. I do my best to try to help my team win in every way.

This is your second year as a quarterback. Do you feel more comfortable? Definitely. Just knowing where everybody’s going and knowing all the plays, I definitely feel a lot more comfortable. Arm strength got a little bit better. I’m seeing things a lot better than I was last year.

What is it like being part of that backfield, where you each have like 600 yards rushing this year? It’s awesome. There’s a lot of guys that we can give the ball to, including myself. It really puts pressure on defenses because they don’t know where the ball’s going.

You had an interception that set up a touchdown. Two plays previous to that, I had a strip, then I ran down to the 5, and I fumbled and they got it back. So, I made up for it two plays later with the pick. It was a weird chain of events. … It felt good. You can’t fumble your fumble recovery, you know what I mean? When I got the pick, I was like, “Thank God.”

You guys are going to states. Are you feeling good about where you are? Yeah, as long as we’re playing together, I think we’re a tough team to bring down.

If you could add any player from the Lackawanna Football Conference to your team, who would it be? Probably (Scranton Prep’s) Tucker Johnson. He hits hard. He’s a hard-nosed kid. He lets his body go.

Are you a Penn State football fan? I am, yeah.

Are you OK after that loss? A little emotional, unstable. No, I knew they weren’t — (No.) 4 is tough to give to Penn State. I didn’t think they deserved 4.

No? No. Definitely not. They shouldn’t have lost to Minnesota, but they weren’t going to beat Ohio State.

So, you’re going to get past this? Yeah. I think I’m past it (already).

Who is the funniest person on your team? Probably Nico Ruggierio. He’s just crazy. You think crazy, it’s Nico.

Looking back at your career, has it been what you expected it to be? Playing football at Dunmore taught me a lot about not just football, but life. Being very disciplined and worrying about the little things — it was more than I expected. It really is an awesome time being part of something special like that.