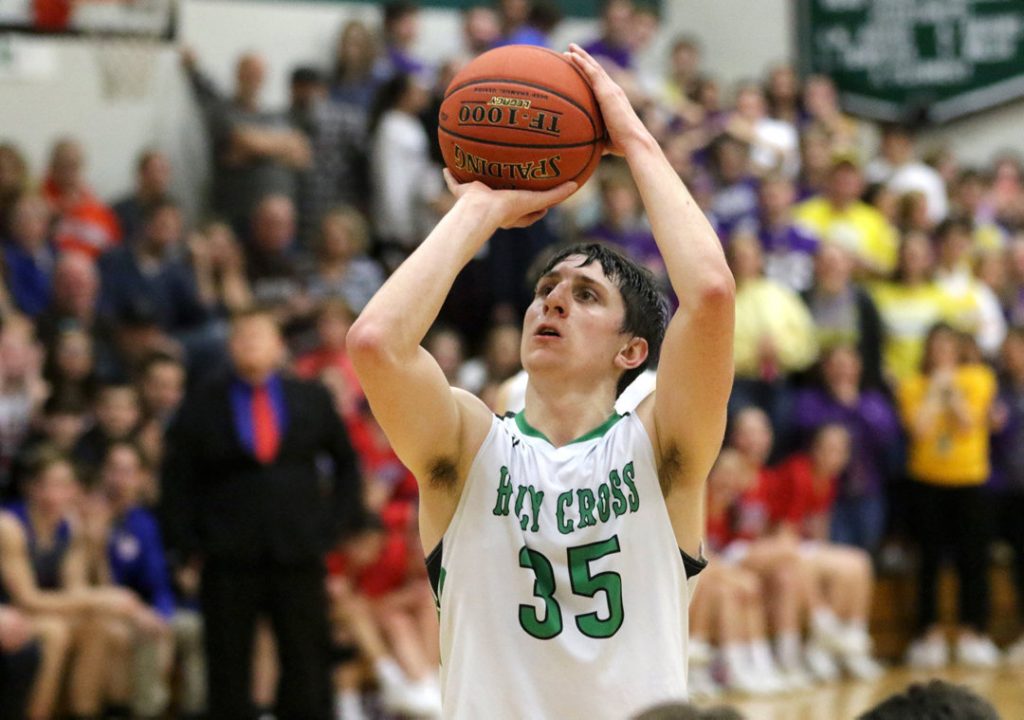 The Holy Cross senior scored a game-high 22 points against Old Forge, then dropped 33 points — including an 18-for-20 effort at the foul line — in the Crusaders’ double-overtime win over Lakeland.

Favorite sports teams: For football, it’s the Eagles. And for college — I really don’t watch the NBA that much — but for college basketball, it’s North Carolina.

Favorite athletes: Probably for basketball it’d have to be, I don’t know that’s a hard question … I’ll say Luka (Doncic).

What is it about Luka that you like? I just like that he’s all about fundamentals. Like he’s not that athletic. He just uses his fundamentals to score on guys and play the game.

Favorite food: I like eggs. Any kind — scrambled, sunny-side up, anything.

Three people you’d like to have dinner with: Probably one would be Luka, Coach K (Mike Krzyzewski) … Adam Sandler. I love Adam Sandler.

Double-overtime games against Lakeland in back-to-back seasons. Do you guys just like playing each other that much? No. I wish it didn’t even go into overtime. I was like jeez. Because our gym’s like super hot and everything, so it’s like painful playing there.

You were hurting, too, right? Yeah, I was cramping up in both legs bad.

You were shooting a lot of free throws. I think I shot 18 for 20 or something like that.

You’re at home, so at least the crowd isn’t yelling at you when you’re at the line. Their student section was. You’d hear the student section yelling at you and saying whatever they want to say. And then you have your fans. But when I was on the line, I wasn’t listening to anyone. I was just focusing on making them.

Do you ever hear them say anything funny? Yeah, they always say I’m Six Toes, because I have six toes on each foot. Or they rhyme it and they say, “Six toes, big nose,” and I just laugh at it all the time. Like every team I play, it passes on to every team. … I just start laughing.

You had a big game against Old Forge, too. That game, they held the ball in the first quarter for like six minutes.

You still managed to score 22 points in three quarters, which is not bad. When they were holding that first quarter, I’m like oh jesus. Because they do it every single game. I’m like, “Here we go again.” So then our coach was like, “Just let them do it.”

How is there no shot clock in Pennsylvania? I don’t know. There should be. Yeah, there should definitely be a shot clock.

You play AAU, I’m assuming. I’m assuming there’s a shot clock there? It depends what kind of tournament you’re in, but some of them have shot clocks. I like them because you can’t hold the ball.

I think everyone only thinks offense when you say, “How is there no shot clock?” But if you’re defending for 40 seconds and then they get bailed out by … Yeah, like a cheap foul or something like that.

Are you feeling pretty good about where you guys are at right now? Yeah, although we have three big games coming up. We’re going to play at Riverside, Mid Valley and Dunmore. So, we still have them.

What do you like about the team this year? I feel like we work as a team more. Past years, we did work as a team, but I just feel more close to my teammates this year. Because most of us are seniors this year and we’ve been playing with each other for four years. So, it’s easier to play with them.

What’s your calling card this year? Defense is always our calling card. That’s what we’re famous for. I love playing defense, especially when you get a steal, and you just get a wide open (shot) and everyone goes crazy.

Couple weeks ago, your coach got a milestone win. Was that neat to be a part of? Oh yeah, because he deserves it. He is a tough coach and everything, but he’ll back us up anytime we need it.

Got any good Kobe memories? Were you a big Kobe guy? I wasn’t a big Kobe fan, but after watching documentaries about his work ethic and everything, it kind of inspires me and my teammates of how he works. Our one coach, Corey Joyce, he’s a huge Kobe fan. So before every game or something, like at a shoot around, he’ll put his 24 and 8 on the scoreboard. And then before home games, he’ll write a long Kobe quote (on the board).

Is defense so ingrained in you guys that you root for teams that are more defensive? Yes. Because defense makes offense, too. … That’s where we usually get our points most of the time. We’ll get a stop, then get going in transition sometimes.