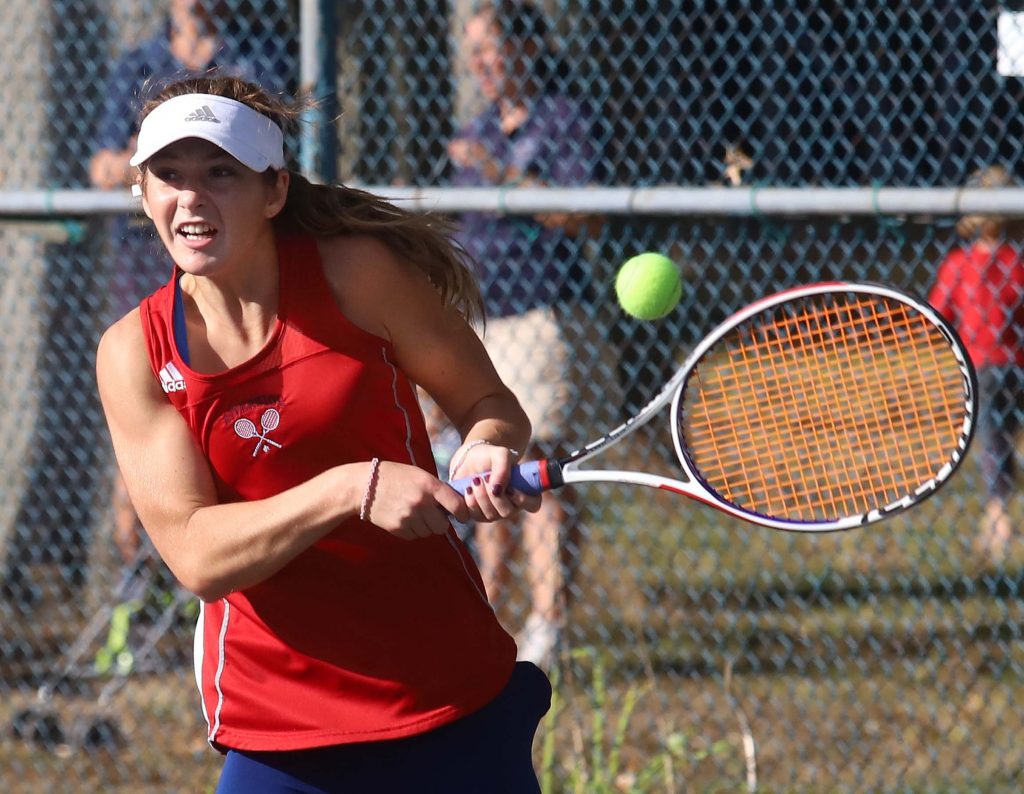 The sophomore tennis player won the District 2 Class 2A individual title. In five matches, she didn’t drop a set and lost just four games. She won the district final match, 6-1, 6-1. Here’s more from her Athlete of the Week interview:

Favorite food: Steak
Three people you would like to have dinner with: Coco Gauff, Rafael Nadal, Roger Federer
Has Coco Gauff been added to the list of athletes you admire with the year she’s had? She’s definitely really inspiring for me and for other kids my age just because it shows the younger kids can compete at that level if they really work hard.
Why do you think she has so much success? She works incredibly hard every day. I can’t even imagine the work that she puts in and she just competes on a weekly basis, which is incredible.
What do you like about Nadal and Federer? I’ve always liked Rafael Nadal since I was little. We call his forehand the Nadal forehand and I use that sometimes when I play. Roger Federer is just Roger Federer. He’s just amazing.
Who’s the most famous person you’ve ever met? I’ve been to the U.S. Open and I saw Rafa and Fed, but I didn’t meet them.
Do you have any superstitions or rituals before a match? I usually listen to music before and then right before my match my coach will stretch me and then we’ll just talk about what I need to do.
What music are you listening to? Honestly, I just listen to the pop radio. Anything that’ll just get me hyped up with energy.
How do you prepare for the state tournament ? Is it more of a focus on yourself or are you looking at the people you might face and what their games look like? It’s definitely a focus on myself because I need to be mentally and physically prepared for the tournament. If I can see them play or watch my next round (opponent), I always do a lot of scouting. That’s what my coach does for me actually. He’ll go and watch and then he’ll tell me what I need to do in order to beat them.
Do you have any hobbies? Honestly, I play a lot of tennis. I’m traveling a lot. I’m in Florida right now so when I’m not playing tennis I’ll be at the beach. I like to hang out with my friends when I can on weekends when I don’t have tournaments and stuff. I go to Allentown a lot because that’s where a lot of my friends are. I train there sometimes.
I imagine you don’t spend much time watching TV. Not really, no.
What’s the last movie you saw? “Spider-Man: Far from Home.” It was really good. I enjoyed it.
Do you have any idea what you want to do after high school? Right now I’m just focused on getting into the best Division I tennis school I can. I’m not really sure what those are right now but we’ll have to see going forward.