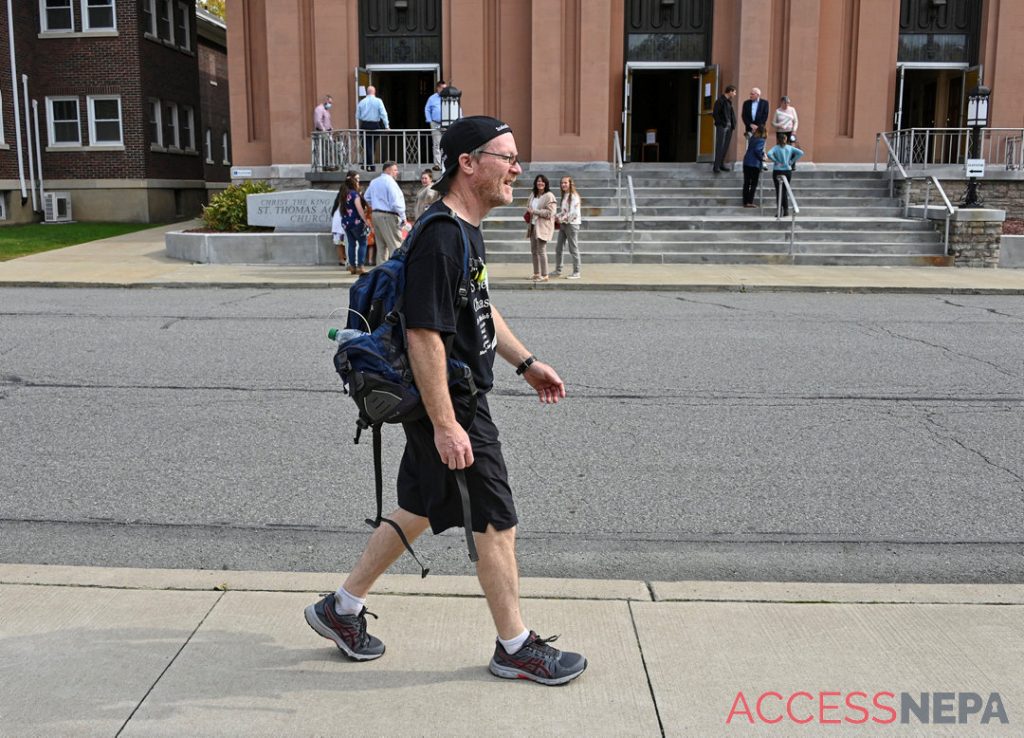 The cancellation of this year’s Steamtown Marathon didn’t stop several people from continuing the race’s legacy in their own ways.

The Rev. Jeff Walsh, pastor of St. Rose of Lima in Carbondale, walked the course Sunday to raise money for the church’s restoration project. His dog, Sam, joined him for about 14 miles of the trek.

“It combined almost everything that I love — the church, my dog, the beauty of Northeast Pennsylvania and its people, and exercise,” Walsh said. ”It was a great success. We added another $13,000 and we’re hoping for more.”

Walsh, 54 , who previously ran in six Steamtown Marathons, admitted this year’s journey from Forest City to Scranton was a lot different.

“It was much more slow,” he said. “It must have been like watching paint dry for the people who were waiting for me in Carbondale.”

Walsh completed the marathon in just under eight hours and thirty minutes, arriving at Courthouse Square around 5:20 p.m. Even though he walks long distances on a regular basis, fatigue and pain started to set in halfway through.

“I was feeling a little sore and was thinking I have another 13 miles to go,” Walsh said. “I was looking forward to putting my feet in the Lackawanna River near Archbald and it was like a magic trick. I felt so much better after I did it.”

Patrick O’Malley, 51, of Peckville , completed the first 24 Steamtown Marathons and didn’t want the pandemic to stop him from making it 25, even if it had to be done under different circumstances. He finished in 5:48 this year after losing about 80 pounds since the last race. He ran Sunday to honor everyone who died from COVID-19 and the essential workers, who he called “heroes.”

“A lot of families have broken hearts and there are a lot of people who kept our society running,” said the former Lackawanna County commissioner. “We still have a hurdle to go through, but I think we’re through the worst part of it.” 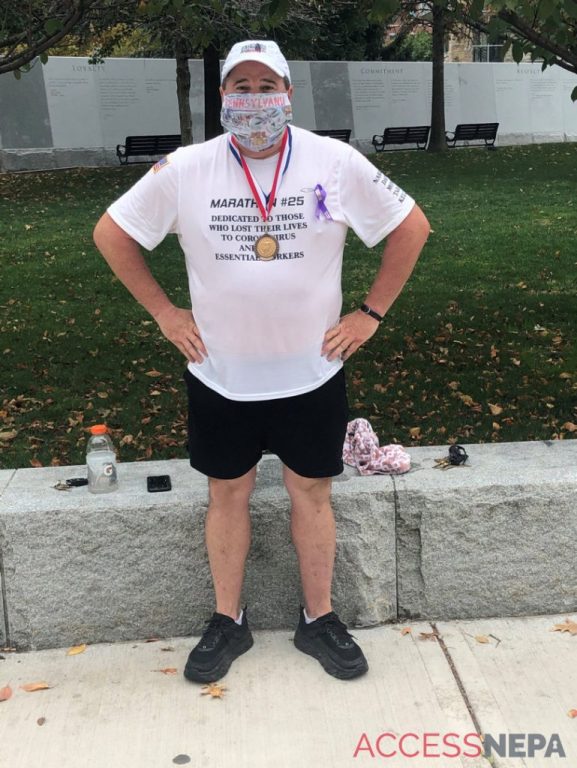 While Walsh and O’Malley followed the annual route, Rebecca Ruggles mapped out her own course Friday.

Ruggles, 32, of West Pittston , participated in Steamtown four times. When the race was canceled, she decided to continue training anyway and created her own route through Luzerne County.

Instead of the booming cannon that marks the beginning of the marathon each year, she took off to the squeak of a whistle.

Ruggles gutted her way through the 26.2 miles in 4:24 with help and encouragement from her husband, David, and their two children, Natalie and Clayson . They handed her water throughout the morning and had pink ribbons, balloons and champagne waiting at the finish line.

“It was definitely different and very lonely,” Ruggles said. “It wasn’t like a normal marathon where you can look over and start a conversation with a fellow runner. I was alone with the pavement.”