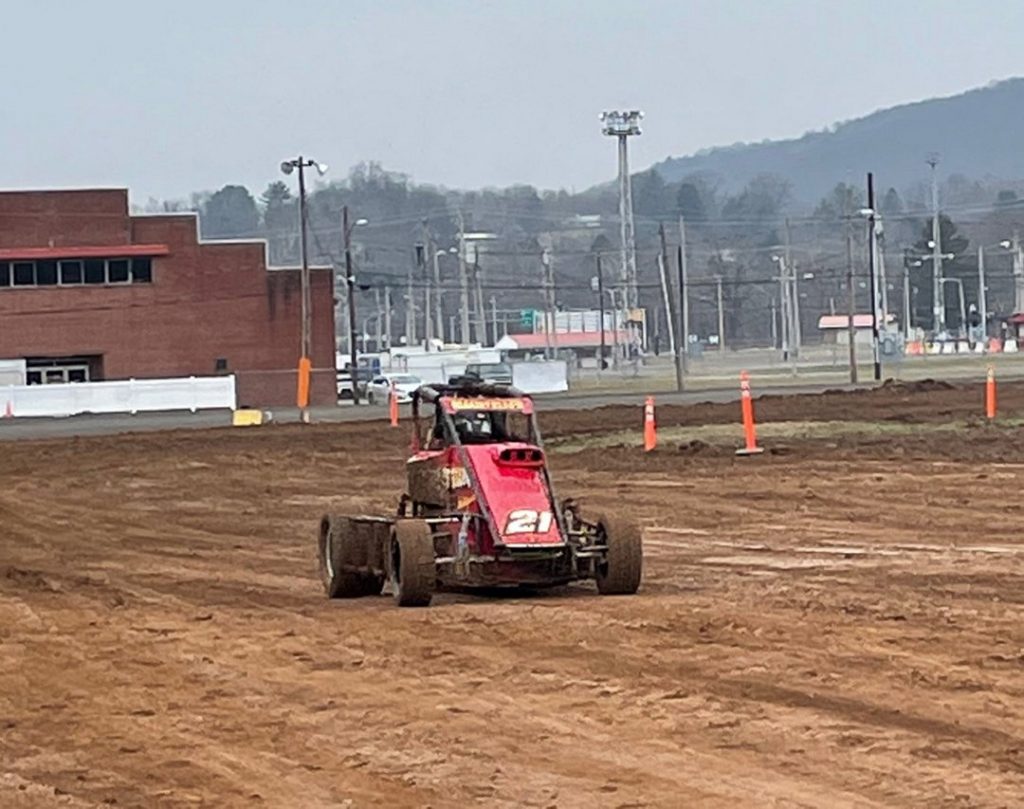 BLOOMSBURG — Randy Mausteller, owner and operator of Mausteller’s Automotive Service in Bloomsburg, is well-known as an open cockpit racer as well as a track promoter.

Of the countless tracks he has run at, none could be dearer than his beloved Bloomsburg Fairgrounds, which is located directly next to his shop.

Mausteller raced at the famous half-mile cinder track as the Midgets roared in front of packed grandstands during Fair Week. He then promoted the final event there in the summer of 1987,a race won by another local star, Johnny Heydenreich.

Like so many others, Mausteller always had hopes that racing would make a return to the track some day.

Come this spring that will become reality when Bloomsburg Fair Raceway will begin operations.

Although word had been out about the re-opening, it wasn’t until t Friday morning that it truly sunk in for Mausteller when he, along with seven-time USAC nation champion Levi Jones, made a few exhibition laps around the newly re-configured 3/8-mile clay oval, for a special media day to show off the project.

And, the smile on Mausteller’s face said it all after he exited his Midget race car at the conclusion of the run-through. Understandably so, as it has been more than 33 years since he lapped the famed speedway.

“It’s great and I never thought we’d be back doing this again,” Mausteller beamed. “They told us it’s going to happen and I’ve been told that before, but now here it is. It’s only going to get better from here.

“It’s a lot different and not even close to what we had run on in the past, but I can tell you this is going to be a race-y track when it’s done and it will be good.”

Brian Wallroski, who sits on the Board of Directors of the Bloomsburg Fair, helped spearhead the return of racing. It began with talks during the yearly Monster Jam Truck Show presented by The Amory Agency, an award winning event production, video production and social media agency. The truck show has always been a big draw for the facility and got Wallroski to thinking about bringing motor racing back.

“There had been a lot of talk and the inception began when we got to talking during the Monster Jam show with the Amory Agency guys who run that event. We wanted a top notch facility for this and in August of 2020 we brought the idea to the Board and committed to the project in September,” Wallroski said.

“Since the announcement there has been all positive feedback, even those folks who came to the races here in the ‘60’s and ‘70’s are excited.”

Wallroski explained that a number of top touring groups with Sprints, Modifieds, Late Models and Midgets are inked throughout the upcoming season including USAC, URC, ARDC, STSS, ULMS and PASS. There are currently eight race dates planned.

“They are all coming and we’re excited about those organizations we have signed with us,” Wallroski noted. “Getting USAC was part of the plan, too. To get them in our first year is very rewarding.”

The track will be 75-feet wide, which means plenty of racing room all the way around with multiple grooves. Progressive banking is planned for the corners. It is being shaped inside the current oval.

The stage, which hosted concerts during Fair Week, has been removed. Safety fencing, concrete walls and lighting are all being added.

Jones had the opportunity to wheel the Doug Wolfgang-driven/Bob Weikert-owned Gambler Sprint car, which has been restored and currently owned by Paul Koch of Schnecksville, a renowned eastern Pennsylvania dirt racer.

“Getting everything leveled up and laying down the clay and where they’re moving here and there and how the track is being laid out is all coming together nicely so far,” said Jones, who has been working as a project consultant.

“The track is getting cut in good now and we are just hoping for the weather to be cooperative. We need to start getting the banking in and more dirt, pouring walls and getting fencing up and making it look how we’re all dreaming of it.”

“In the last five or six years working with USAC, I’ve been in some instances where tracks have closed and that’s a kick in the gut. Now to be able to resurrect a track feels really good,” he continued.

“This town and the whole area is unbelievably rich in racing history and the fans have showed that including this past year during the pandemic – people showed that they want to be at dirt races. Hopefully we can prove that this will be an event where you can bring your family and that’s the goal. We want to bring something exciting to Bloomsburg and bring back the history and recreate the big events.

Racing at the Bloomsburg Fairgrounds dates back to 1922 primarily with Midgets. In 1953, NASCAR held a 200-lap race won by Herb Thomas over Dick Rathman.

During the 1963 fair, a pair of twin-25 lap Midget features were held, None other than Mario Andretti took the overall title with second-place finishes in each race.

The first event for the Bloomsburg Fair Raceway is set for May 29 and will feature the USAC East Coast Sprints and ARDC Midgets. The USAC Eastern Storm will be joined by the ULMS Late Models on June 20. Dirt Modifieds roll in next on July 14 with the STSS, which will be accompanied by the 602 Crate Sportsman Modifieds.

On Aug. 6, the USAC National Midget Series will headline the night’s program along with a second appearance by the USAC East Coast Sprints and ARDC Midgets. URC and SpeedSTRs revisit the track on Aug. 22.

Oct. 2 will mark the first time since 1985 that Midget car racing will be part of the annual Bloomsburg Fair as ARDC takes the spotlight.

A yet-to-be announced special Sprint Car race also is in the works.