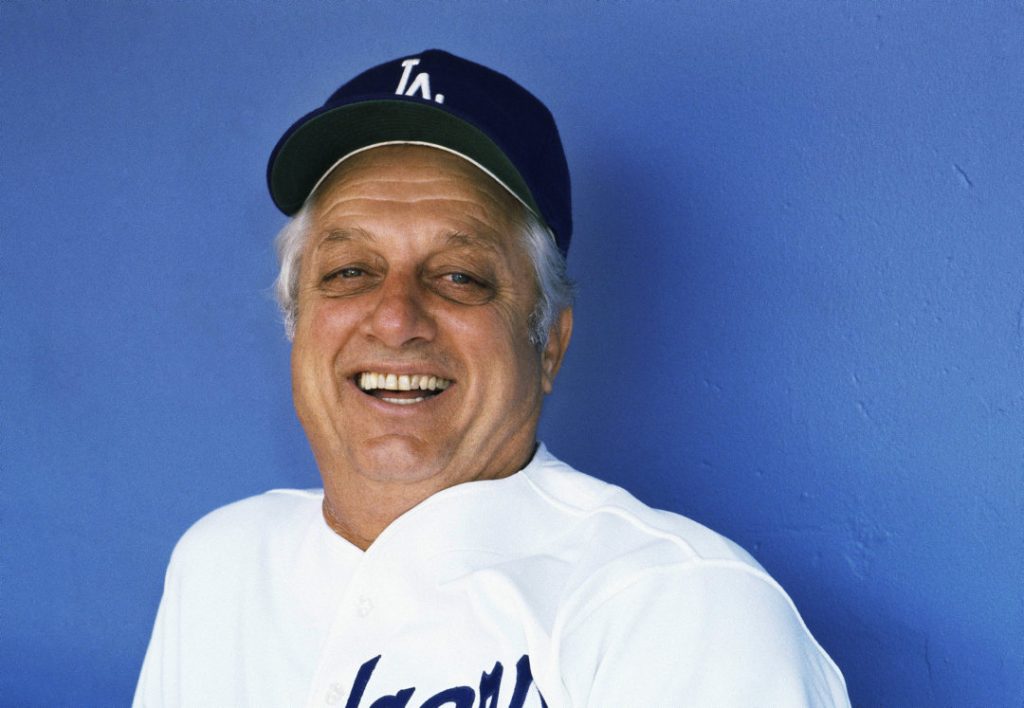 As the baseball world mourns the death of Hall of Fame manager Tommy Lasorda, Scranton native Paul Fryer is among those lucky enough to also be counting their blessings.

In his final six years in the Los Angeles Dodgers’ scouting department, Fryer was part of Lasorda’s inner

circle, sharing trips with him in the Dodgers’ private jet, as well as nights at the ballpark and many phone conversations.

“You would spend a day with Tom and it was like a lifetime for somebody else,” said Fryer, who lives in Los Angeles and is now the global crosschecker of scouting for the Boston Red Sox. “He loved life.”

“It was like you know just to hang with him and go to games with him and spend days with him, those memories I’ll never forget,” Fryer said. “We had such a great time.”

Fryer started with the Dodgers in 2006 and was with the team through the 2015 season, in that time earning Lasorda’s trust and friendship.

“You get humbled by this when you’re with him because he was so generous with his time, and he was big on loyalty,” Fryer said. “So, if you were in his corner, he would do anything for you.”

When the Dodgers were sold to the group headed by Magic Johnson, the team gave Lasorda the use of a private jet for his travel.

“He would call me after the draft is over because we would go to see our minor league clubs,” Fryer said. “So there were four of us, myself, Brian Stevenson was our West Coast guy and Logan White, who was the vice president of scouting, and Tommy. For about six years in the summer, I would make three or four flights with him. It was so much fun because he was great.”

It was in those days Fryer understood the competitive nature of Lasorda.

“Once you meet him you realize why he was a Hall of Fame manager,” Fryer said. “He was the most competitive guy I think I’ve known in the game. Really competitive and an unbelievable amount of energy. He’s probably, in my life in the game, 40 years, the most special baseball person I’ve ever met.”

Back in 1994, Lasorda became a bit of a fixture in the local media market when he agreed to become the spokesman for L.A. Bank.

“I wanted to move our headquarters from Lake Ariel, being the First National Bank of Lake Ariel to L.A. Bank and establish a presence in Scranton,” former bank president John Martines said.

“I thought of Tommy Lasorda,” Martines said. “He’s an elderly guy, so elderly folks would relate to him. He’s obviously a sports icon, so a lot of younger people would know him, and he’s manager of the L.A. Dodgers, and it might all fall into place, which it did.”

In becoming the pitchman for L.A. Bank, Lasorda filmed a series of commercials with the Mall at Steamtown as the backdrop, as well as doing radio spots, and appearing in newspaper ads and bank lobby signs.

“He really put L.A. Bank on the map, if you will,” Martines said. “A small bank from Lake Ariel trying to make it in downtown Scranton. We changed the name and hooked up with him and it worked out really, really well.”

Two years later, Lasorda came back to Northeast Pennsylvania for a marketing event at Lackawanna County Stadium in May of 1996. The timing was perfect as the Dodgers were coming to Philadelphia and had an off day before their series with the Phillies started. Lasorda greeted fans, signed autographs and threw out the first pitch before the Scranton/Wilkes-Barre Red Barons game that night.

“I liked Tommy. He was a good guy,” Martines said. “He even put up with me even though I was a San Francisco Giants fan, their arch rival. I enjoyed his company a lot.” 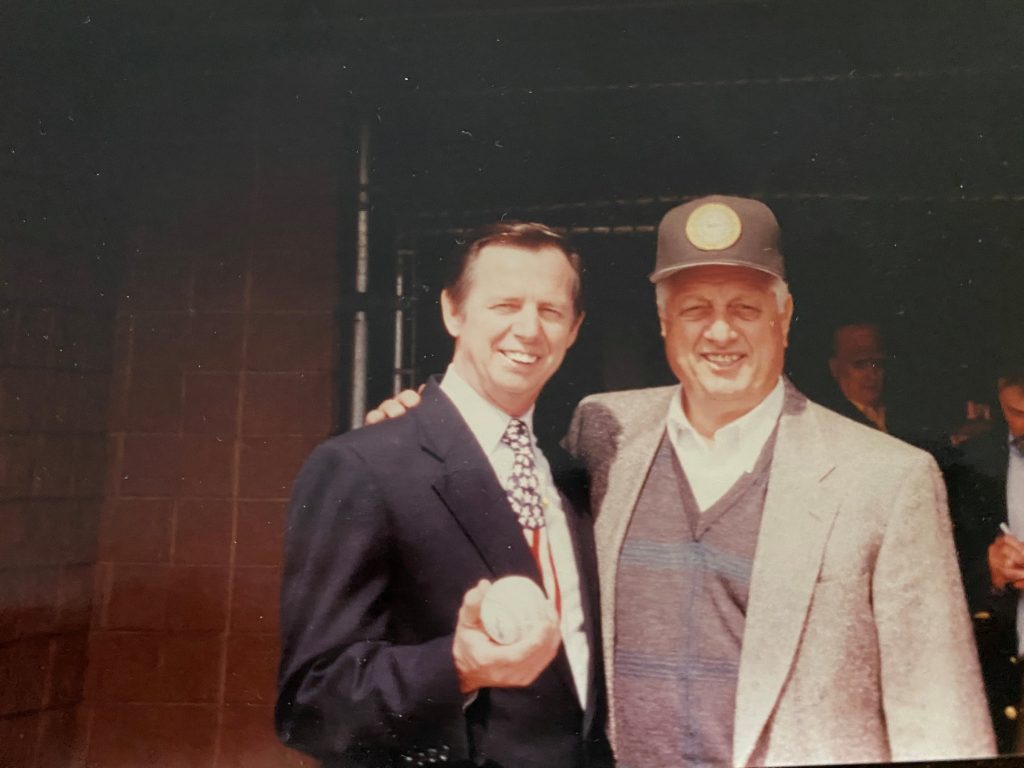 Lasorda was aware of Wade’s Pennsylvania roots, and their paths crossed at Winter Meetings, ballparks and at spring training, but their relationship was solidified near midseason in 1978 when the National League all-star team was announced and shortstop Bill Russell was the only Dodgers infielder not named.

The Houston Chronicle had asked Wade to act as intermediary to set a photo of the Dodgers and Astros all-stars, and when he gave Lasorda the list of players, he erupted.

“I’m not taking any bleep-of-a-picture without Bill Russell. He’s an all-star, too,” Wade recalled of the tirade.

Finally, Wade waved his hand in disgust in front of the entire locker room and told Lasorda to forget it. When he told his boss what happened, it was suggested Wade retrace his steps and apologize.

They met as Lasorda was coming down the steps from the clubhouse to the field.

“I said, Tommy I want to apologize for that and he said, ‘You don’t understand. I have to stick up for Russell in front of my players. I had to do that,’ ” Wade said. “And I said that’s fine but the next time do that to your own PR guy, and I turned around and walked away. Ever since that day, we had very, very cordial conversations for what amount to over 30 years.

“So I think he respected the fact that I stood up to him as a 22-year-old, know-nothing and showed that I had a little backbone as well.”

That respect went both ways.

“I spent 41 years in the game,” Wade said. “The ability to think back on who were true characters of the game and who had stories to tell, they’re the type of people you’d like to just sit around and be quiet and listen to what they had to say.”

Fryer’s recollections are of a generous man who enjoyed winning at anything, even if it meant avoiding paying the dinner tab when it came.

“That’s because everything to Tommy was competition,” Fryer said.

He was gracious, too.

The night Lasorda, Fryer and his son, Logan, then age 4 or 5, traveled to a Class A Dodgers’ affiliate for a game, throngs descended upon their seats for autographs. Until the first pitch. Then Lasorda turned his attention to the game, but between innings, returned to signing for waiting fans.

“So throughout the entire game there’s a block-long line of people trying to get his autograph,” Fryer said. “So my son’s watching this and not really understanding what’s going on because we’re sitting with him. Tommy did sign everything, and my son was really standoffish to people at the time, and by the end of the night, he’s sitting in Tommy’s lap eating cotton candy together.

“At the end of the day we’re leaving the park and my son looks up and he said, ‘Everybody loved that Tommy Lasorda.’ He didn’t he didn’t have any clue who he was, he just knew these people loved him.”

That’s the effect Lasorda had not only on Fryer’s son, but generations of Dodgers’ fans, including Frank Sinatra, who Lasorda got to sing the national anthem for his first home game as manager, and comedian Don Rickles, who once wore the Dodger uniform and served as a ballboy.

Fryer considers himself lucky to have heard those stories and hundreds more as they traveled together, often repeated, but never stale because of Lasorda’s ability to captivate those around him.

“I was humbled by it, really, truly,” Fryer said. “I knew when I was going through it with him. It just felt like you were really a part of something.

“He’s one of those guys you meet after the fact and say wow, you know I wish I could have played for him. Even though it’s a sad day, he had a great life. I just feel really, really lucky that I was able to spend those years with him. It was great.”