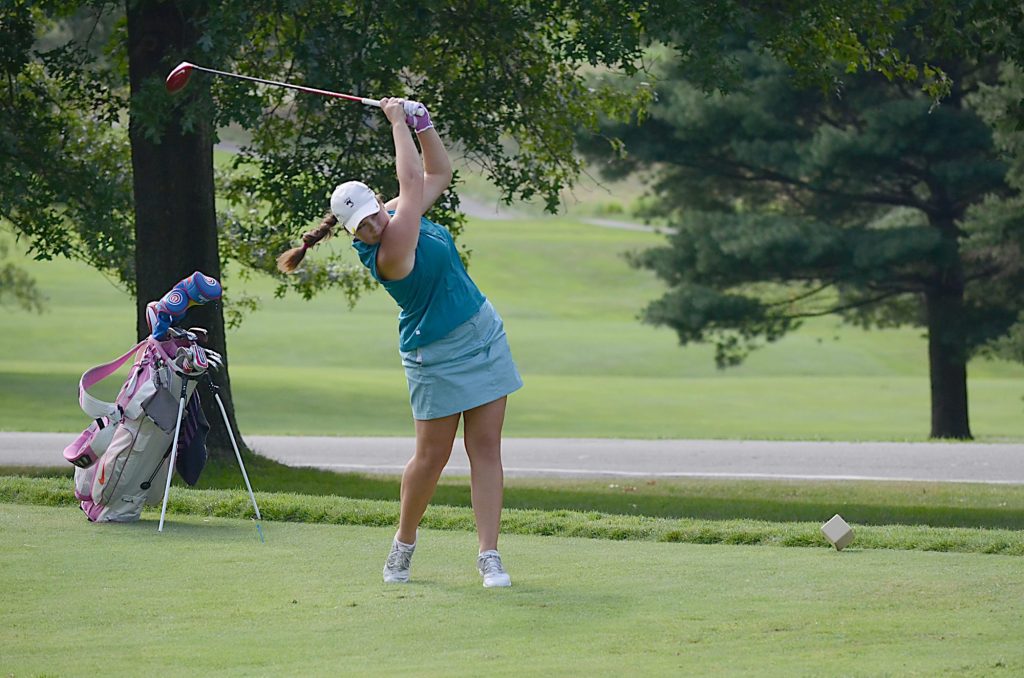 A few short weeks ago, Jess McClellan was preparing to embark on the summer of her dreams.

That was before the coronavirus outbreak put her life — and everyone else’s — on hold.

The MMI Prep graduate and first-year Penn State University student was breezing along in her freshman year, excelling as a PGA Professional Golf Management major.

She was already on the PGM executive board, involved in school activities and was enjoying college life. McClellan had also been accepted for a summer internship at storied Royal Dornach Golf Club in Scotland, and was already looking into plane tickets for her scheduled departure in late May.

“When I found out that I got the internship, and I was super excited,” McClellan said. “Another freshman from my class got it as well, so there would have been two of us traveling together, which would have been great.

“A few weeks ago we got our housing, got the address to our house, and I was about to buy plane tickets,” she added. “My director emailed me and asked if I bought tickets. I said no, but I was about to today. He said hold off.”

Within days, Penn State — like colleges and universities nationwide — closed its doors for the remainder of the school year, with students finishing up their second semester online. With travel restrictions in place and all sports shut down both here and abroad, so too was the internship to Scotland, officially cancelled for the year.

“I was going to leave May 26 and come back the 26th of August. It was amazing,” McClellan said. “It would have been so exciting.”

McClellan’s love for golf put her on this path.

She starred in the sport at MMI, where she was a two-time state qualifier. As a senior she captured both the District 2 and PIAA Class AA Eastern Regional championships, and went on to finish 10th in the state.

She was accepted into Penn State’s prestigious PGM program, and decided that’s where she would begin to cultivate her career.

“PGA Professional Golf Management is different (than turfgrass management) because it’s not just focused on the grass and maintenance part of it. I’m actually getting PGA certified to be a head professional,” McClellan said.

“Some of the turfgrass guys were becoming certified to become superintendents. I could minor in that, and eventually get a certification to be a superintendent, but that’s not the track that I’m on,” she continued. “I’m more of head professional, director of golf, general manager. I will graduate a PGA Class A certified instructor, too, so I can teach anywhere that I want to.”

By attending Penn State, McClellan knew that she’d have to try and walk on if she would play collegiately for the Nittany Lions. Early on, she realized that was going to be a tough fit.

“I did think about it, but once I got there I realized how much PGM takes up of your time, and I’m really involved in PGM,” she said of her major. “I’m on the executive board already as a freshman. I’m our merchandise chair right now. I’m also the family relations chair for our THON organization. I keep myself busy, but I’m still playing a lot of golf.”

“I play every chance that I get. We have full access to the two golf courses at Penn State,” McClellan said.

Playing is also built into her academic schedule.

“One of my classes is called Player Development. It’s a three-credit course, and it’s literally just practicing and playing golf twice a week. There’s another class called Tournament Golf, and that’s playing in our tournament series that we have. You have to play in at least five to get full credit, and they give you grades based off of your scores. That’s six credits there of just playing golf,” she said.

And when the weather gets bad, she simply moves indoors.

“We have a full facility downstairs on campus called the Golf Teaching and Research Center. We have full access to that,” she said. “We do club fitting down there, we have three simulators, shot tracer, all the different technologies used to see our swings. We have 3-D technology. And it’s a place to play in the winter.

“We have two full-time PGA instructors that work down there, so they’re for us during the school year, so that’s really cool, too.”

It’s all geared toward expanding her game and preparing her for certification.

“One of the main points of going back to player development is getting us better so we can pass our player ability test, which is one of the tests we’ve got to do for the PGA. It’s the playing aspect of your PGA certification,” she said. “The center helps us work on our swings in the winter, and be the best player you can be.” 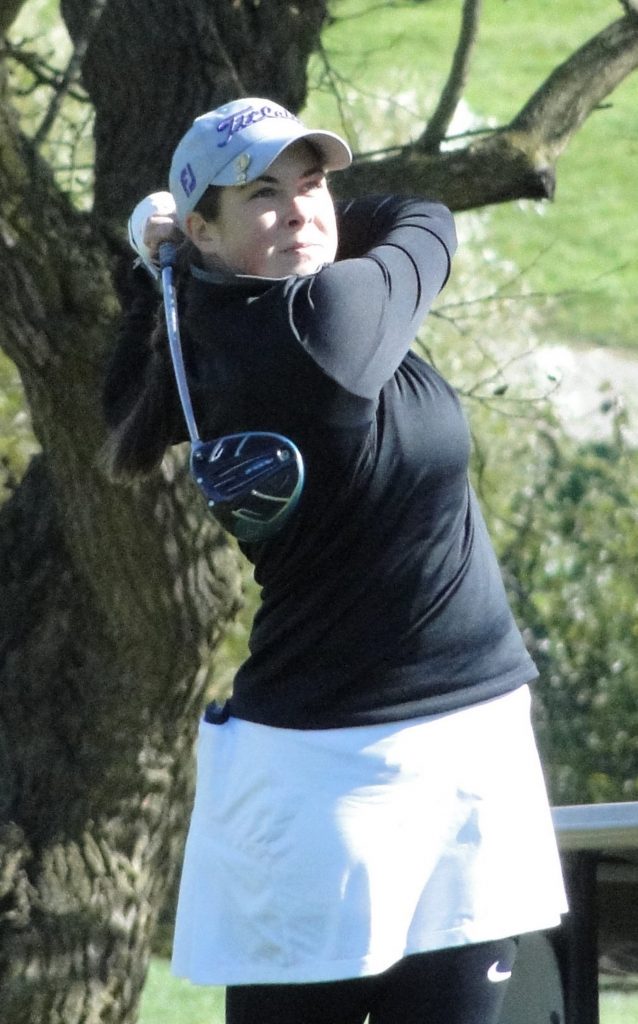 Another part of her PGM major is live experience. McClellan needs to complete four internships, one each year. Three of them are three-month internships during the summer, and the fourth is a seven-month internship, where you spend half of your junior year outside of the classroom.

“Over the summer I saw (Penn State) post on Facebook that one of their freshmen was in Scotland working at Royal Dornoch. I thought that would be awesome to go work in Dornoch, Scotland, for the summer, getting paid to do that and playing golf. I was like I’m going to go for that,” McClellan recalled. “My dad thought I was crazy. He thought it was just one of those things that you just say and never end up doing.

“When I got to school and we started talking about internships, and I met the kid who was over there (Noah Sparrow) and started talking to him, he didn’t have one bad thing to say about the experience. He said everything was amazing, the guys he worked for were incredible. They knew so much and taught him everything.”

McClellan immediately stepped up her pursuit of it.

“I went to one of our directors and asked if that was still an option, and that I’m interested. And he said it definitely is, and they want more kids back from Penn State specifically. So I applied for it.

“It took about two months to get a decision back, because of everything I had to do. I had to do interviews, submit cover letters. And they had to get things approved because it’s international,” she explained.

McClellan had already met with the people she would have worked for at Royal Dornoch, while with Penn State’s contingent at the PGA Show in Orlando, Florida.

“We talked about the different opportunities that I would have, what my responsibilities would be,” she said. “I couldn’t wait.”

This internship isn’t just any internship. It is at Royal Dornoch.

Situated along the east coast in the Highlands of Scotland, Dornoch has settlements that go back 4,000 years. The club was formed in 1877, but there’s been golf in Dornoch dating back to 1616.

Golf is everything to this small Scottish town.

Sparrow, Penn State’s first intern to Royal Dornoch in 2019, told McClellan all about it.

“From what Noah told me it’s one of those golf towns where there’s not much else to do, but you’re on the coast,” McClellan explained. “Everyone golfs. And if you don’t golf, you’re still a member of the club and you get to go to social events there.

“He said after he would play, he would walk down the street and people would yell ‘Hey Noah, I heard you shot 74 today. I heard about your chip-in.’ Everyone just knew, and that’s one of the things that I liked about it and I was excited for it, to get to know the community aspect of it.”

The golf would have been OK, too. After all, the course is ranked 10th in the world in Golf Digest’s latest top-100 rankings, and is second only to St. Andrews’ Old Course among Scottish courses.

Five-time British Open champion Tom Watson once said it was “the most fun I’ve ever had on a golf course” after playing Royal Dornoch in 1981.

It was scheduled to host the Scottish Senior Pro-Am this summer.

“Just the history that’s there, and the people that go and play golf there, Tom Watson, Jack Nicklaus, and a bunch of other big stars in the golf industry. That would have been exciting,” McClellan said.

As the coronavirus began to take hold in the U.S., McClellan and her fellow Penn State students weren’t sure what to think.

“At first when we were moving out for spring break, there were rumors going around campus like take some extra stuff, you might be home for an extra week or so. We hadn’t heard of anything official, so we didn’t think much of it,” McClellan explained.

“When we got home and other schools started to close already for the rest of the semester, then we got an email saying we’ve got an extra three weeks to April 3, that classes would be online. At that point, all my friends were upset, but we realized it had to happen,” she said. “A lot of my friends went on spring break to various places in the world. You can’t expect to bring 50,000 kids back to one place after not knowing where they went.”

McClellan and her roommate returned to their room to get additional belongings later, and at that point heard that the rest of the semester would be completed online.

“At that point we were like our freshman year is over,” she said. “Being in PGM, it’s a really small group, only about 100 kids, so I know all the seniors. All the seniors were upset because, that’s their senior year. They thought they had an extra two-three months and it just got cut short. We’re all still in disbelief. We have to wait and see what happens.”

Without an internship to fall back on, McClellan has been doing some leg work for what is to follow when things return to normal in this country.

“There were only the two of us that were going abroad. The rest were all in the United States,” McClellan said. “There’s kids going all over. There’s not much said right now. We don’t know much, because it’s changing every day. Different states have different rules.

“Some of the kids that were supposed to go on internships in May, their course is closed indefinitely. It’s just a matter of waiting, but I was told to just focus on school work and apply for different internships,” she said. “With the help of my director, I’m just hopeful I can get an internship or figure something out.”

As for Royal Dornoch? McClellan isn’t giving up hope on that just yet.

“We’re all hoping that I won’t necessarily have to apply again since we know all of them. They had all the paperwork down with the UK, and I was all set to work over there,” she said. “We’re hoping that next year everything’s back to a somewhat normal way, to a point where you can travel safely and we get the chance to go over there. It’s definitely something we’re looking forward to.