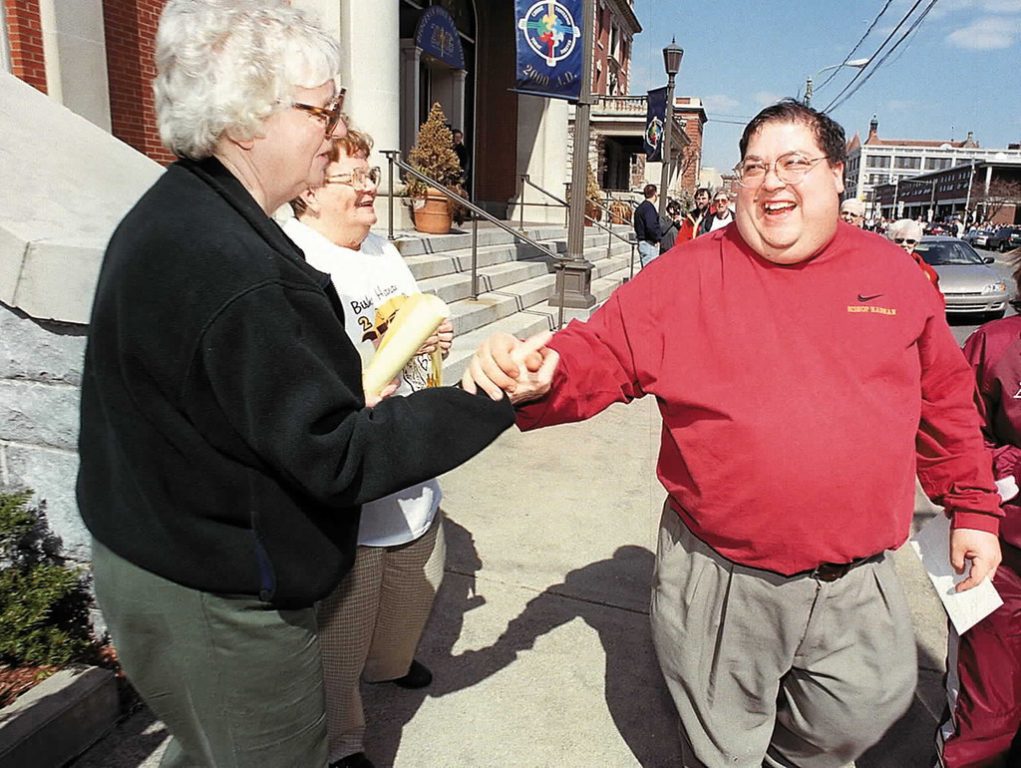 Foundation in the works to continue Bucci’s legacy

John Bucci would have turned 58 this month.

In his honor, a group of family and friends is working on a suitable tribute to the late basketball coach of a state championship team at Bishop Hannan, and the driving force behind AAU basketball in Northeast Pennsylvania.

Irascible and blunt, insightful and funny, sharp-tongued and benevolent, Bucci could be all of those things, and if I was able to say that to him today, he’d probably shrug his shoulders and give me a smirk, and tell me that it’s important to be true to yourself. Or one of probably a hundred different phrases that Bucci used on former players, and maybe some referees, to get his point across.

“Booch” knew what ingredients to mix into a successful recipe, but also didn’t mind stirring the pot, often with that impish grin. His shocking death in November caught most of us off guard.

Love him or not, Bucci was good at what he did, and maybe even better at what most people never knew he did.

There were many times when Bucci would be working behind the scenes to help some basketball player who needed a hand, and not just with their game.

That’s why his niece, Mary Bucci, John’s brother Michael, and a group of close friends are putting together a foundation to help continue the work that John so quietly did.

“I guess in February after John had died, I was talking with a small group of people about starting a foundation in memory of him, really focused on providing scholarships to at-risk and at-need children who participate primarily in basketball,” Mary Bucci said. “Because it was something John did, and did quietly, and was very passionate about, and helped a lot of children.”

The paperwork hasn’t come through yet, but the groundwork has been laid for the John Bucci Memorial Foundation, with a page on Facebook where information should start flowing in the next few weeks.

Of course, the coronavirus pandemic has slowed the wheels on almost everything government related, so it shouldn’t come as a surprise that the federal and state paperwork needed to form the charitable 501(c)(3) is still a few weeks from completion.

Bucci had a boisterous public persona and his feelings were always known — at least from the sidelines. Behind the scenes was this person most people didn’t know.

“I wish more people did,” Mary said. “He’s my uncle, I’m biased, but he was a great guy. Maybe he wasn’t for everyone, but I don’t know who is.

“So he did for very long, especially at Backcourt Hoops, and very quietly, fund many people to participate in AAU, especially camps, lessons, for children who had a need but wanted to participate. He had financially supported that for a long time.”

Beyond the veneer, Bucci was a softy who liked helping people.

“That’s kind of the only Johnny I’ve ever known,” Mary said. “The first time I saw a basketball game I was astounded. Yeah, I remember going with my grandparents and it was surreal.”

For someone who started as a scorekeeper at his alma mater, Western Wayne, Bucci came a long way in his lifetime. The people behind his foundation would like to give others the same opportunity.

They aren’t ready to take donations or run the first fundraising event. Hopefully, that’s just a couple weeks away. Again, check Facebook, or chat up one of the people on the foundation committee.

“Right now, we’re working on a T-shirt sale,” Mary said. “I haven’t put anything on Facebook in terms of donations because I’d really like to wait for the 501(c)(3). Obviously if it goes beyond these two weeks that we are expecting we would have to rethink that. But my hope was to wait a little bit longer before we (accept donations).”

In the almost a year since his death, Mary said the one thing that’s helped in the healing process is the comfort provided by the people now working alongside her.

“I think it’s really hard, especially for my dad, and it’s brought up a lot of comfort and maybe some peace that we are doing something to honor him and really getting to know some of his friends in the process. It’s really been a gift to work with them.”

Now it’s time to bring Bucci’s passion to something bearing his name.

“He was so passionate about what he did and that was so admirable,” Mary said. “He really dedicated everything to it and it was something he was amazing at.”