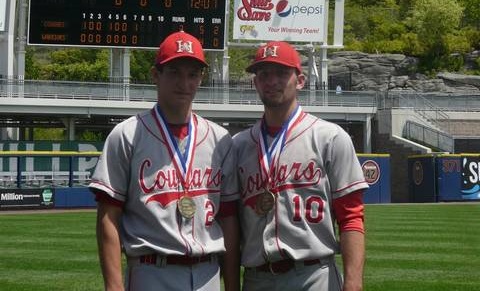 Biasi brothers brought back to their roots

Brothers Sal and Dante playing catch in the street in front of their home in the township’s Ridgewood section, tirelessly working out, lifting weights, running, laughing, swapping baseball stories, sharing big league dreams, even getting kid brother Nick involved, and maybe shooting a few hoops and the breeze with the Planutis brothers across East Venisa Drive.

But instead or preparing for a new season with Merrick’s of the Hazle Twp. Little League, in advance of another District 2 championship run with the Hazleton Area High School baseball team or leading a baseball resurgence at Penn State University, the older Biasi brothers — like many impacted by the coronavirus scourge — are actually working from home.

Baseball is their job; maintaining optimum fitness and elevating their highly valued pitching arms to peak performance are requirements.

The pandemic abruptly forced professional baseball players across the country to leave their spring training facilities in Florida and Arizona and return home last month, including Sal with the Seattle Mariners organization and Dante with the Kansas City Royals.

“None of the teams have a timetable on when we can go back or anything like that, so you’ve gotta kind of stay ready this whole time as best as you could and you’re ready when the pandemic eventually settles down and guys are starting to play again,” Sal, 24, said.

Back home in Ridgewood, each Biasi brother has rediscovered a willing workout partner who does not know what his immediate or his long-term future holds but who’s also well aware it includes the same relentless drive and work ethic that propelled each to this point in his career.

“I’ve been working out roughly three, four times a week … doing some agility stuff and my throwing program at the house,” Sal, a right-hander, said. “It takes me back to when I was 10 to 12 years old and I was throwing with my brothers outside on the road in front of our house. We recently built a (pitching) mound in the backyard, so we could start throwing bullpens (bullpen sessions).”

Added Dante, a 22-year-old lefty: “It’s really nice just having someone to play catch with, even Nick. He was getting ready for his high school season (as a Hazleton Area sophomore) and now he’s throwing and doing all that same stuff with us. Having someone to do it with definitely helps, even though the situation we’re all in stinks. At least you have other people going through it, so it gives you more motivation and pushes you harder than if you were alone.” 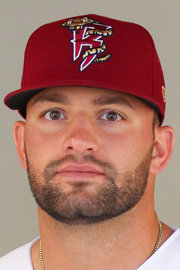 Sal Biasi is in his fourth season as a professional baseball player. 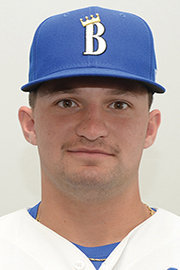 Dante Biasi is in his second year with the Royals.

Dante, the Royals’ sixth-round pick in last year’s Major League Baseball Draft, had been at the team’s training camp in Surprise, Arizona, for nearly three weeks when he was told to pack his belongings and head home in mid-March.

“We were throwing bullpens and getting ready to start intrasquad (scrimmages) and throwing in games, but that all got cut short,” he said. “At first, we got shut out of our facility when all of this started breaking in the United States. You saw on Twitter that some teams are

sending players home and some teams are still playing; you really didn’t know what to expect. Then we had a couple of meetings and they went in and cleaned our facilities and fumigated everything and all that good stuff. We were hoping that we’d be able to go back in a couple of days and start practicing and working out again.”

Finally, Major League Baseball — in line with other professional sports organizations and the NCAA — shuttered all operations, suspending play, delaying the start of the season at all levels indefinitely and sending players home.

“I was sitting in a hotel room when they called us into a meeting,” Dante said. “They were like, ‘We really don’t have much to tell you guys right now, but they want all you guys to be cleared out of the facilities and go home,’ just until they could get a handle on this.”

“Our whole organization pretty much got together,” he recalled. “They told us that everyone from all the teams were being sent home. They said that they didn’t know what the timetable looks like when we’ll be back. They pretty much have been sending us workouts and throwing stuff just to stay ready ever since. The trainers and strength (and conditioning) coaches have been checking in … just to make sure everyone is staying kind of where they were.”

For Sal, the delay in the start of the 2020 season is helping him fully recover from a shoulder injury that twice landed him on the injured list as a member of the West Virginia Power, the Mariners’ Class A affiliate in the South Atlantic League, last season. He still finished 7-4 with a 4.96 earned run average, 63 strikeouts and 32 walks, most of those numbers accumulated with the Power after he was traded from the Milwaukee Brewers to the Mariners for big league catcher David Freitas in April.

“Personally … this time is kind of a blessing in disguise because it’s given me extra time to build up my arm properly and slowly and to get back to being 100 percent healthy,” Sal said.

Time away from the structured part of the game also has reaffirmed Sal’s life-long desire to wear a major league uniform someday.

“I look at this time as an extended offseason,” he said. “Guys who are hungry and want to get better … they’re gonna do whatever they could to keep training, to keep throwing and to keep progressing toward their goals. The guys who aren’t (hungry) and don’t have that same drive and are lazy and need a kick in the butt, it’s gonna show when they do make that call to (resume) play.”

That call, Sal anticipates, would quickly kick his and other players’ training regimens into a higher gear.

“We’re gonna get out to Arizona, we’re gonna have a short spring training and then we’re gonna get into the season,” he predicted. “My big thing is nobody’s a finished product. It doesn’t matter if you’re in the minor leagues … or if you’re in the big leagues. At the end of the day, everybody has something to get better at (and) everybody has something to work on in their own craft. … You can make some serious jump and you can pass some guys who might not be as hungry.” 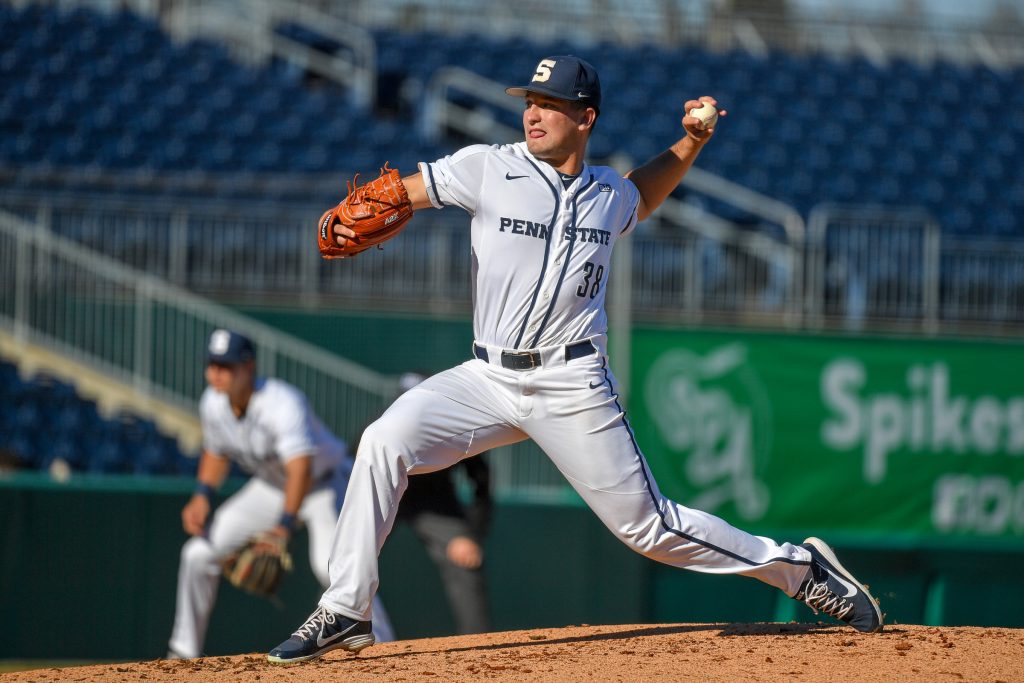 MARK SELDERS / PENN STATE ATHLETICS
Penn State’s Dante Biasi pitches against UMass Lowell during his collegiate career. The former Hazleton Area High School standout was drafted in the sixth round by the Kansas City Royals last year. He was at spring training last month in Arizona when the pandemic forced teams to shut down camps and send everyone home. The Biasi brothers are training as best they can to keep in shape.

In addition to their physical work at home, the Biasis are doing their best to maintain a proper mental approach to the game.

“I believe I’m on the right track. … I’m doing the right things,” Sal, an 11th-round pick of the Royals in 2017, said. “I’m trying to learn something new each day. I try to be a sponge with everyone I talk to. Everyone has different opinions … but taking in some of the good and some of the bad and using what I could to my personal benefit is what’s really helped me in getting my arm right (and) getting my body right because at the end of the day, the biggest thing in this game is to be healthy and to be able to be out there as often as possible.

“When the time to play does come around again, it’s about getting down to business,” he continued. “I simply want to handle business every day. It doesn’t matter where I am.”

“I’m just gonna keep throwing and keep doing bullpens,” said Dante, who went 1-0 with a 2.50 ERA, 24 strikeouts and only three walks in seven appearances with the Burlington (North Carolina) Royals, a Rookie-level team in the Appalachian League, last season. “You have to look at it as a way to help you gain and make improvements in your own game. Whenever we do go back, I’ll be ready either way. … If you would completely shut down, then you’d be stuck if something (came up) and you wouldn’t be ready to throw.

“It’s tough because you’ve got to control yourself, but then you also want to push it because if in 30 days or whenever this thing ends, you have to go back and you have as much time as they’re gonna give you to get ready.”

While the coronavirus spread has put a temporary halt to official baseball activities for Sal and Dante Biasi, their unofficial workouts have gone off without a hitch — thanks to one another, their mutual quest for excellence and Nick, too.

Yet, the break and somber news that the number of those affected by the pandemic continues to rise in this country and abroad also has offered the brothers a fresh dose of perspective.

“You’ve really got to appreciate what we have here day by day, (being) with family and friends when you’re home, teammates and being thankful for the opportunities that you have, whether you’re an athlete or not,” Dante said. “Not being able to hang out with them while you’re home (because of shelter-in-place restrictions) is kind of awkward.”

Though there’s nothing strange for either Biasi working out with his oldest, best friend.

“This doesn’t really change my expectations baseball or career-wise,” Sal said. “The big thing is staying healthy, staying home and making sure your family is OK. … I’m not worried about myself … but the older people I am around. That’s why I try to be careful and try to wash my hands often. … This is a pandemic and all of these stay-at-home bans are out there for a reason. We all need to cooperate so everyone can get back to their normal lives. I think that’s what everyone wants at this point. Hopefully, it’s all over soon.”