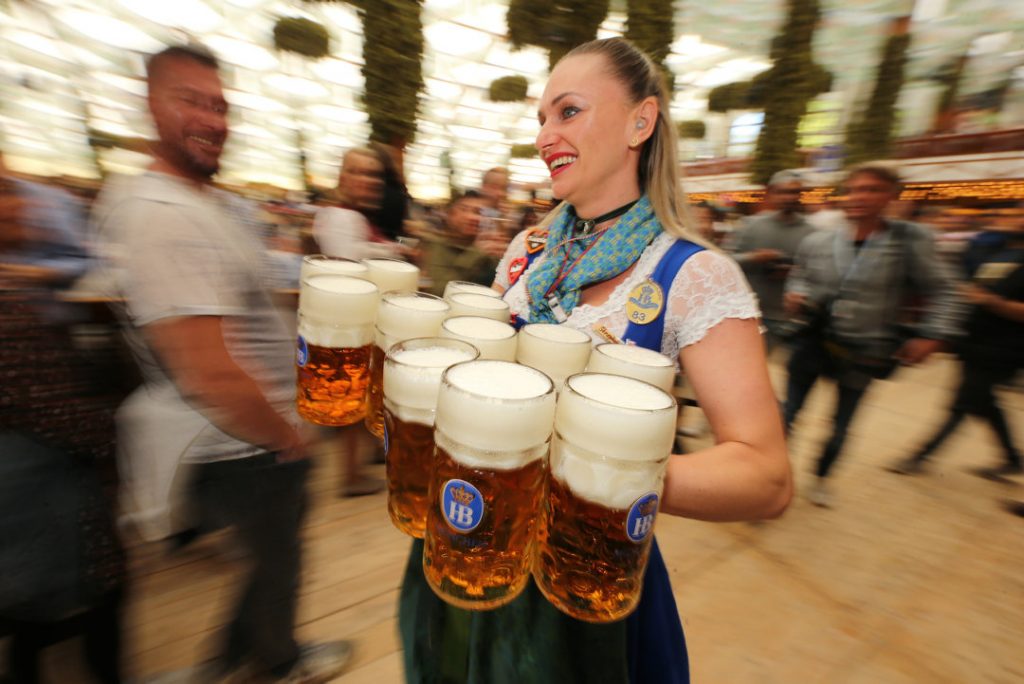 One thing has always taken me a bit by surprise at Munich’s Oktoberfest celebration — and no, I’m not talking about the humongous size of the beer steins. (Although, granted, they are something to behold.)

I’m referring to the soundtrack I hear as I make my way through the Spaten-Franziskaner-Bräu, Hacker-Pschorr and Paulaner brewery tents.

One might expect they’d be filled solely with traditional Bavarian music, but that’s far from the case. Sure, you’ll get plenty of German oompah during the world’s largest volksfest, but you’ll also get a lot of American radio hits and pop songs, which have become nearly as popular as those giant pretzels they serve.

All this reminiscing has me missing Germany and Oktoberfests of years past. If you’re celebrating at home, here’s a play list of 10 songs you would likely hear (again and again) if you were there now.

Nothing gets the Munich party started quite like John Denver, whose ode to the beautiful state of West Virginia always encourages massive sing-alongs at the festival. No one seems to know exactly how (or why) this became a “thing” at Oktoberfest. But I like to think it’s because the singer’s real last name wasn’t Denver — it was Deutschendorf.

You’ll hear this short song more often than any other at Oktoberfest, as Germans and visitors stand up from their tables, clap and sing out at top volume between gulps of beer. The song’s title translates to “a toast to cheer and good times.”

Underscoring the eclectic nature of a proper Oktoberfest playlist, this offering — nicknamed “The Flyer Song” — is a catchy children’s tune about daydreaming, animals and flying. The adults in the big beer tents have adopted it and made up a wacky dance to go along with it.

The beer tent crowds absolutely go wild when this early ’80s pop classic hits. And I’m betting you’d join right in, singing along with Nena in German — whether you know the language or not. Of course, there’s also an English version (“99 Red Balloons”), but the original is way better.

Get ready to polka with this Edmund Kotscher and Rudi Lindt-penned classic. The signature version was recorded by “Polka King” Will Glahé and His Orchestra and reached No. 16 on the U.S. pop charts back in 1957. But everyone from Lawrence Welk to “Weird Al” Yankovic to the Pogues have tackled the song over the decades.

This song gets real old, real quick in any other setting than Oktoberfest. But revelers in Munich have a seemingly boundless appetite for this 1961 Bruce Channel hit, which was introduced to a whole other generation — and generations to follow — in the film “Dirty Dancing.”

Clap your hands, chant along – “Iha Iha Iha oh” — and groove to the accordion in this cool oompah number, widely known as “The Donkey Song.” It features some really amazing yodeling.

This heartfelt power ballad from Robbie Williams’s 1997 debut solo album, “Life thru a Lens,” has been covered by Jessica Simpson, David Archuleta, Beverley Knight and others. But the renditions I prefer are the ones sung with gusto by folks in beer tents in Munich.

This Neil Diamond sing-along isn’t just for Red Sox games. It’s long been a staple of Oktoberfest celebrations, as people swing their steins in the air and belt out the chorus with glorious bravado. So good, so good, so good.

This touching ballad hails from the 1987 album of the same name by the popular Austrian act Schürzenjäger. It’s often heard near closing time in the Oktoberfest beer tents, so it’s a good choice to close out our play list, as well.

OK, Loisachmarci isn’t an Oktoberfest staple — at least not yet. But the duo has played the festival and its really cool music mixes traditional Bavarian music with EDM, so I decided to include a tune here. Recommended for anyone who likes alpenhorn with electro beats.