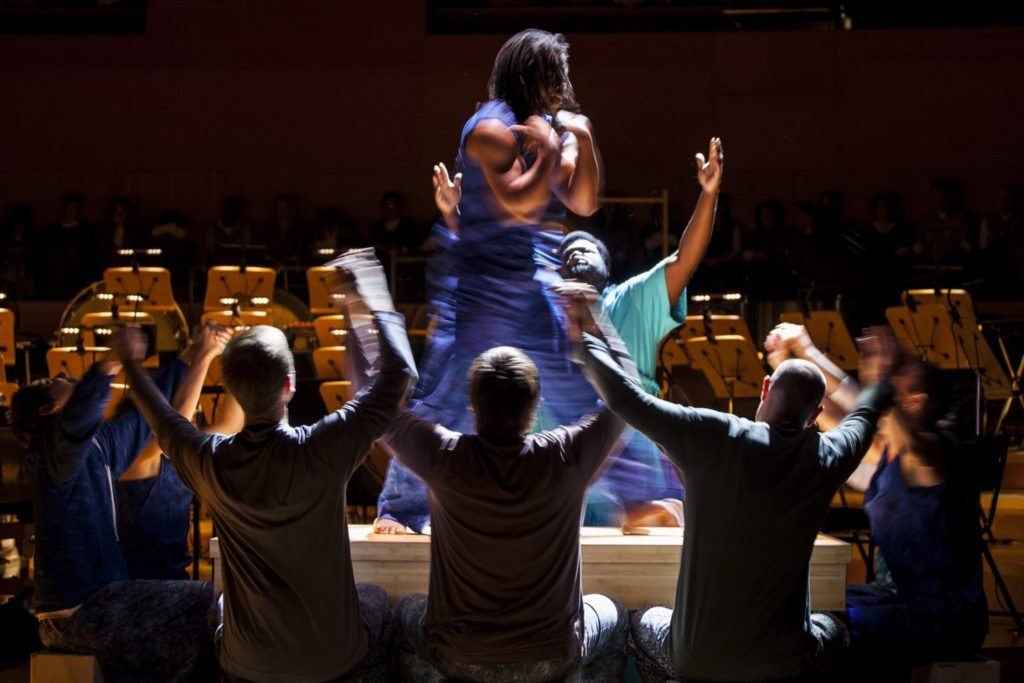 Four music pieces of profound meaning for Passover and Easter

We’re well warned of enduring some of our hardest coronavirus days. Passover and Easter are serious holidays that alert us to world-altering shifts. For Jews it was the throwing off their bonds of Egyptian slavery, which led to adaptation of the Ten Commandments. Easter recounts the single most consequential death in history.

It is no coincidence that three of the most profound musical works of the 18th, 19th and 20th centuries happen to address the meaning of Passover and Easter. We have Bach’s “St. Matthew Passion,” Wagner’s “Parsifal” and Schoenberg’s “Moses und Aron.” We also have a new candidate, John Adams’ “The Gospel According to the Other Mary,” given its premiere by the Los Angeles Philharmonic in 2012 and already being put to the perspicacity test.

In our solitude, we cannot expect the shared wonderment of Passions and operas meant to be consecrations of the stage as well as church. But these sacred offerings inspire deeply private thought as well, and in recordings, videos and streams — some brand new — they offer a special kind of personal solace when heard home alone.

What makes all four all the more meaningful in our current situation is that, despite their religiosity, they transcend denominations. Instead, they embrace the universality of human need, just as we are seeing in this global moment how the world’s most serious crises, those of pandemics and climate change, demand a collaborative global response.

To begin with, we are reminded here that Passover and Easter are not inseparable. The Last Supper, so movingly portrayed in the two Passions and at the heart of “Parsifal,” were the Passover Seder. “Parsifal” suggests a way forward and can almost be interpreted as a Buddhist parable about common good in Christian garb. Its centerpiece: the Holy Grail, the chalice from which Jesus drank at the Last Supper, giving it magical powers. “Moses und Aron” is a righting of our moral compass, a necessity in times of great crisis.

Choices for where to turn for the “St. Matthew Passion” are bewildering. Long recognized as a masterpiece of masterpieces, there are any number of approaches to it, from grandly romantic statements to clinically musicological ones. I’m not sure we want anything too overblown right now (although Otto Klemperer’s classic recording with great opera singers has a magnificence not to be underestimated) or clinical.

A new recording in which Masaaki Suzuki conducts his eloquent Bach Collegium Japan feels exactly right for our occasion. The Bach specialist, who uses period instruments and small forces, accepts no untoward emotion and rejects no genuine feeling. Without lacking warmth, the performance suggests an acceptance that life as what it is can be reflected in an acceptance of Bach’s music as what it is, no more, no less. Suzuki’s way to the spirit is simply to be in the spirit with loving attention to detail.

The conductor and keyboardist hasn’t changed his approach since first recording the Passion in 1999 and performing it live at UCLA four years later. But he has deepened it. There is a oneness among singers and instrumentalists and from the exceptional recorded sound that is special.

Choices are myriad as well for “Parsifal,” be it videos and audio recordings that go back to the first days of either format. “Parsifal” was Wagner’s last, most accomplished and most glowing score, but it also achieved something no other composer had yet and that is particularly striking right now as we experience the glories of an unsullied springtime during the worst of times.

In “Parsifal,” a holy fool finds enlightenment by learning compassion. Sins are resolved. The wounds they cause are healed through becoming one with nature. Terrible suffering and blooming flowers are both holy.

Through Saturday, Bavarian State Opera is streaming on its staatsoper.tv website a production from 2018 that, like Suzuki’s Bach, feels exactly right, right now, if in a radically different way. Directed by Pierre Audi and with sets by German painter Georg Baselitz, it has a grimly unappealing look that was much disliked in early reviews. The production, however, boasts the best cast that can be put together today, starring Jonas Kaufmann in the title role. The conducting by Kirill Petrenko is in a radiant class of its own.

That’s, indeed, the brilliant point: bringing radiance to the unradiant. And for that Petrenko and Baselitz make an exceptional pair. The painter is known for turning his subjects upside down, as he does on painted scrims in front of the stage. The characters wear grotesque costumes. There is much blood. You often want to turn away.

But then you see Petrenko, music director of Bavarian State Opera and the Berlin Philharmonic, with a beatific look on his face, refusing to turn away and refusing to not bring out as much glory from every note as humanly possible. Through it all, aided by the intensity of Audi’s direction and this extraordinary cast, turning away from suffering is not an option. You must embrace. When opera can do that to you, it becomes necessary.

Schoenberg’s unfinished “Moses und Aron” is not an easy opera to grasp musically or philosophically. But through some of the most sophisticated music of the first half of the 20th century it deals with the enormous complexities of communication. This includes what can be expressed and what is inexpressible, what leaders should or should not tell people and the whole inexplicable issue of worthiness and sacrifice for common good. In other words, here is a very substantial exploration of what we are dealing with personally, politically and socially in our pandemic response or lack of it, in our unprecedented coming together but also instances of selfishness — the best of us and the worst.

Several audio recordings and videos of Schoenberg’s opera are outstanding, but accessibility is another issue. I haven’t found any streams of recordings (Pierre Boulez’s with the Amsterdam-based Concertgebouw Orchestra is the best) that include a libretto and you will be lost without one. Outside of a couple of crudely posted YouTube offerings, you will likely have to turn to DVDs and Blu-rays for video.

A top recommendation is the classic 1975 film of the opera by Jean-Marie Straub and Danièle Huillet. Shot in the desert, it has the somber grandeur of a biblical epic only with a soundtrack of a first-rate recording of the score.

Normally, it would be absurd to say that Adams’ “The Gospel According to the Other Mary,” with a libretto assembled from biblical texts and modern sources by Peter Sellars, has passed the test of time after a mere eight years. These, though, aren’t normal times. Listening to it now, the work sounds powerfully prescient.

Placing the Passion story in a contemporary setting, it reveals an Easter and Passover from places we tend to ignore — particularly the homeless and oppressed for whom the pandemic adds yet another level of suffering. It includes arias taken from the writings of Dorothy Day, founder of the Catholic Worker Movement, who is getting welcome attention thanks to a new biography.

The stunning exquisiteness of Adams’ Passover aria has become more moving than ever. On this pandemic Passover, the question, from the poem by Holocaust survivor Primo Levi, takes on a whole new aspect: “Tell me, how is this Passover different from other Passovers?” Spring is joyously heralded by frogs. Terror and radiance bump elbows throughout.

The L.A. Phil made a superb recording of “The Other Mary” conducted by Gustavo Dudamel, but you can also find a gripping video version, with Sellars’ staging, on the Berlin Philharmonic’s Digital Concert Hall and stunningly played by the orchestra under Simon Rattle, temporarily streaming for free. This site also serves as one-stop Passover-Easter shopping, with the famed Sellars-Rattle production of the “St. Matthew Passion” and Rattle leading a fine concert performance of “Parsifal.”