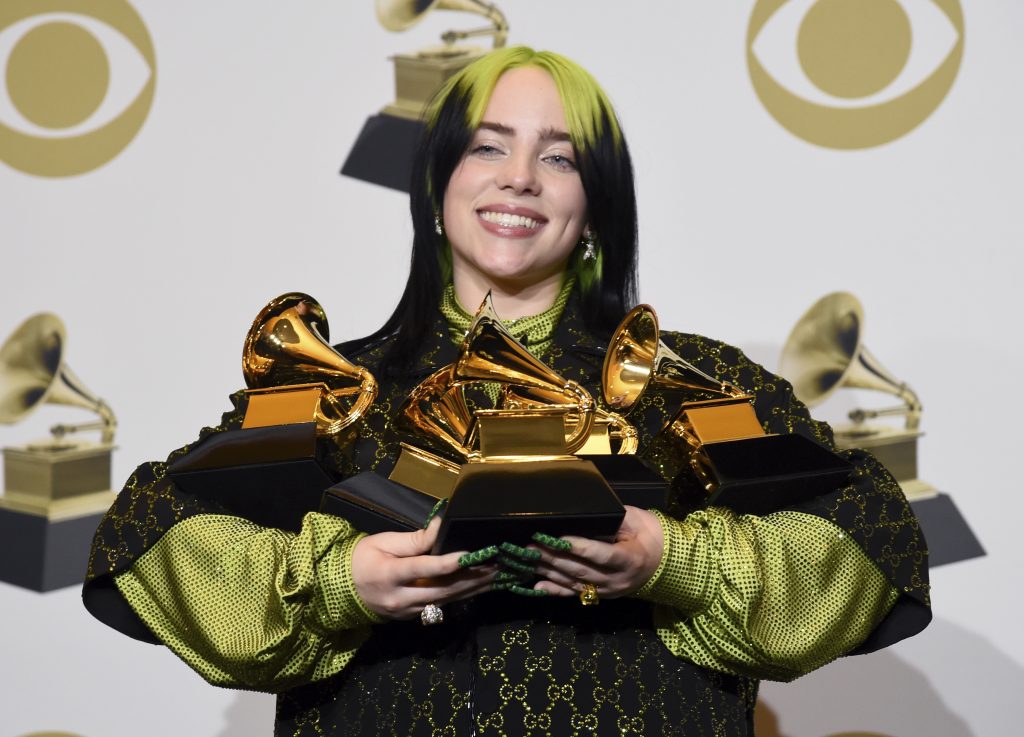 Eilish, who gives voice to troubled youth, tops the Grammys

LOS ANGELES — Singer Billie Eilish, who gave voice to young people struggling with depression on a do-it-yourself album she made at home with her older brother, is atop the music world.

The 18-year-old made history at the Grammy Awards Sunday. Not only did she become the youngest person to win one of Grammy’s top awards — record, song and album of the year, and best new artist — Eilish is the first artist to sweep all four since Christopher Cross in 1981.

Her triumph came on a night made somber by the death of former Los Angeles Lakers star Kobe Bryant. It also ended a tumultuous week for the Recording Academy that included its ousted CEO accusing the Grammys nominations process of being rigged, and Diddy calling out the organization for not giving enough respect to R&B and hip-hop.

Eilish’s “When We all Fall Asleep, Where Do We Go?” also won best pop vocal album. Her brother Finneas O’Connell also won awards for engineering and producing the album.

“The music I listened to when I was growing up, maybe 7, 8, 9 or 10, 13, that was the most important music to me forever,” Finneas said backstage after the ceremony. “Anytime a person that age comes up to either one of us and says (it is their favorite), I know how much that means to them. That’s why it means so much to me. I hope they’re celebrating. This is all because of them.”

He said that they never thought that an album that addresses depression, suicidal thoughts and climate change would be up for a Grammy.

Eilish noted that they made the album in a bedroom of the Los Angeles-area home where they grew up in. 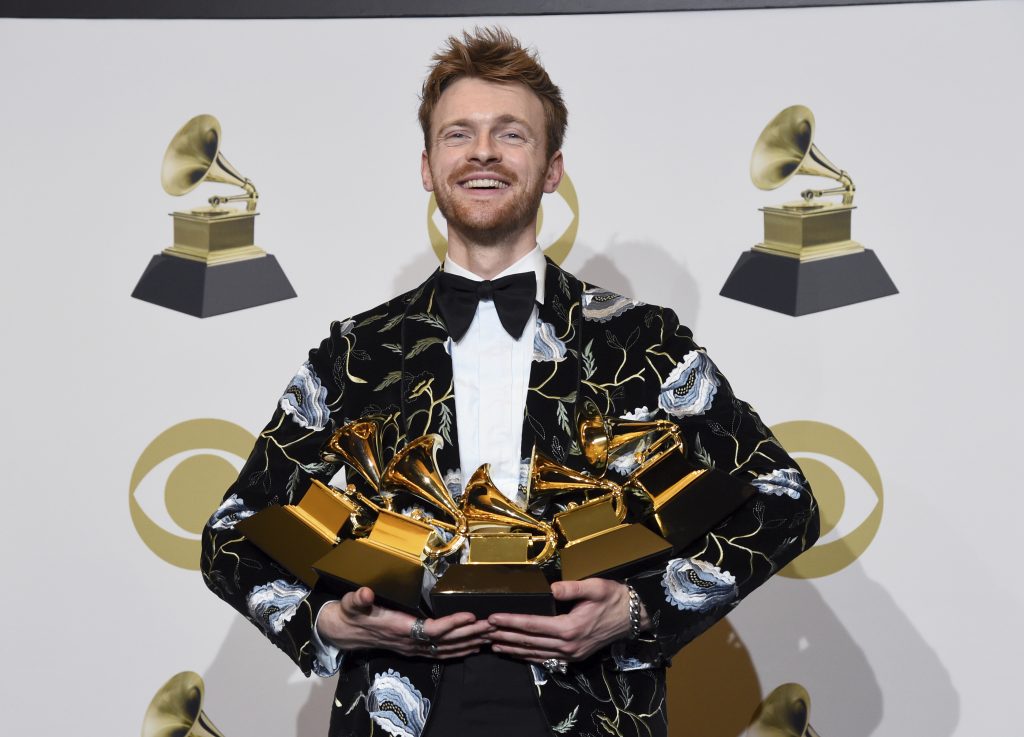 CHRIS PIZZELLO / ASSOCIATED PRESS
Finneas O’Connell poses in the press room with the awards for best song and best record for “Bad Guy,” album of the year and best engineered album, non-classical for “When We All Fall Asleep, Where Do We Go?,” and Producer of the Year, Non Classical at the 62nd annual Grammy Awards at the Staples Center on Sunday, Jan. 26, 2020, in Los Angeles.

In accepting her awards, Eilish noted that she had grown up listening to many of the artists at the ceremony in Los Angeles’ Staples Center. She also said she thought Ariana Grande deserved album of the year, an onstage moment that recalled Adele saying the same thing about Beyoncé the same year Adele triumphed.

The success of a young, white girl came on a night the Recording Academy seemingly went out of its way to highlight diversity. Lizzo offered a powerhouse opening performance, and there were tributes to Prince and the late rapper Nipsey Hussle. Tyler, the Creator offered an incendiary version of “Earfquake” with Boyz II Men. Lil’ Nas X sang his omnipresent “Old Town Road.” Grande sang, as did H.E.R., host Alicia Keys and Gary Clark Jr. with the Roots.

Tyler, the Creator said later that the rap album Grammy was a backhanded compliment.

While he’s grateful to be acknowledged, “it also sucks whenever we, I mean guys that look like me, do anything that’s genre bending, they always put it in an urban rapper category,” he said. “I don’t like that urban word. It’s just a politically correct way to say the N-word to me.”

Earlier in the show, Keys sat at a piano to sing a rewrite of Lewis Capaldi’s song, “Someone You Loved” that name-checked many of the nominated artists but also included a few pointed lines about respect.

Keys also had the delicate task of addressing the shock of Bryant’s death in a helicopter crash, while onstage at the same arena where the former Laker won championships.

She sang “It’s So Hard to Say Goodbye to Yesterday” with Boyz II Men. References to Bryant abounded — a Lakers jersey held up by Run-DMC during their performance of “Walk This Way” with Aerosmith, and adorning a couch on a set where Lil Nas X began “Old Town Road.”

“We’re all feeling crazy sadness right now,” said Keys, who received praise online for how she handled it.

“We need to continue to reach out,” she told her fellow artists. “This is the beginning of making music that moves people again.” 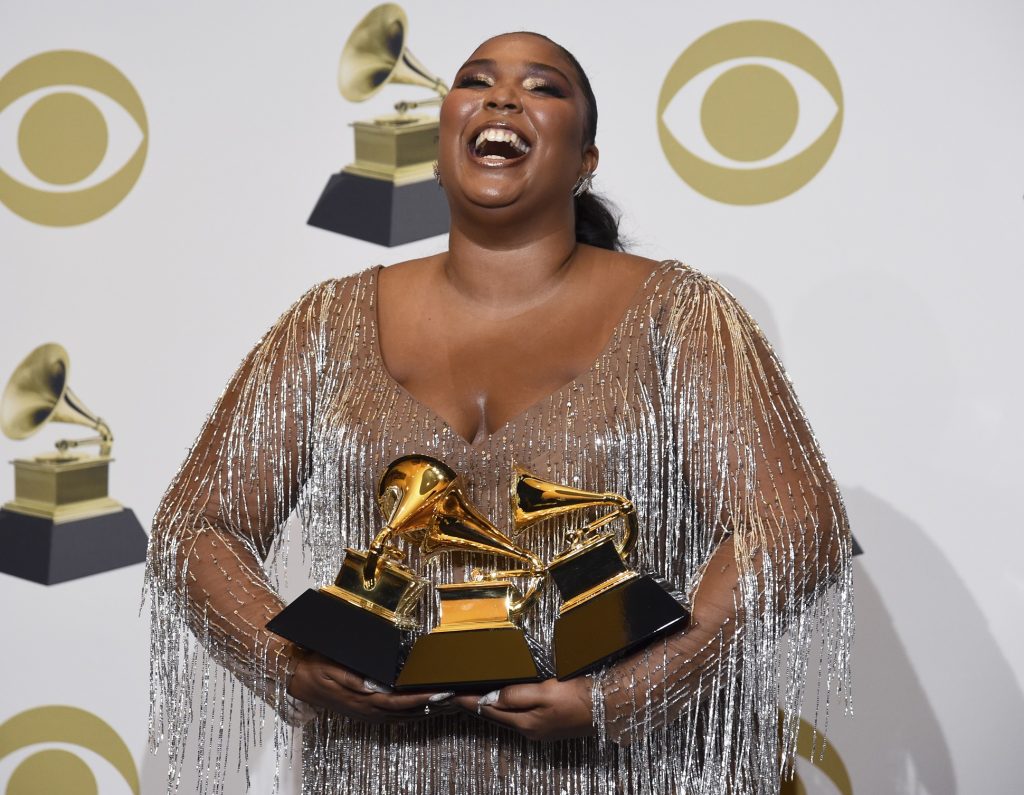 CHRIS PIZZELLO / ASSOCIATED PRESS
Lizzo poses in the press room with the awards for best pop solo performance for “Truth Hurts,” best urban contemporary album for “Cuz I Love You” and best traditional R&B performance for “Jerome” at the 62nd annual Grammy Awards at the Staples Center on Sunday, Jan. 26, 2020, in Los Angeles.

Clark’s pointed “This Land” also won for best rock song and rock performance, and he won a third for contemporary blues album.

Among the show’s more touching moments was Tyler, the Creator bringing his tearful mother onstage with him to accept his Grammy. Singer Demi Lovato made a comeback appearance after her reported overdose, singing a song she said was written in the troubled days before that event. Camila Cabello sang “First Man,” a song dedicated to her father, and received a bear hug from a sobbing dad when it was done.

DJ Khaled helped lead the emotional tribute to Hussle, the Los Angeles rapper who was gunned down in March, not long after attending his first Grammy ceremony as a nominee. On Sunday, Hussle won two posthumous Grammys.