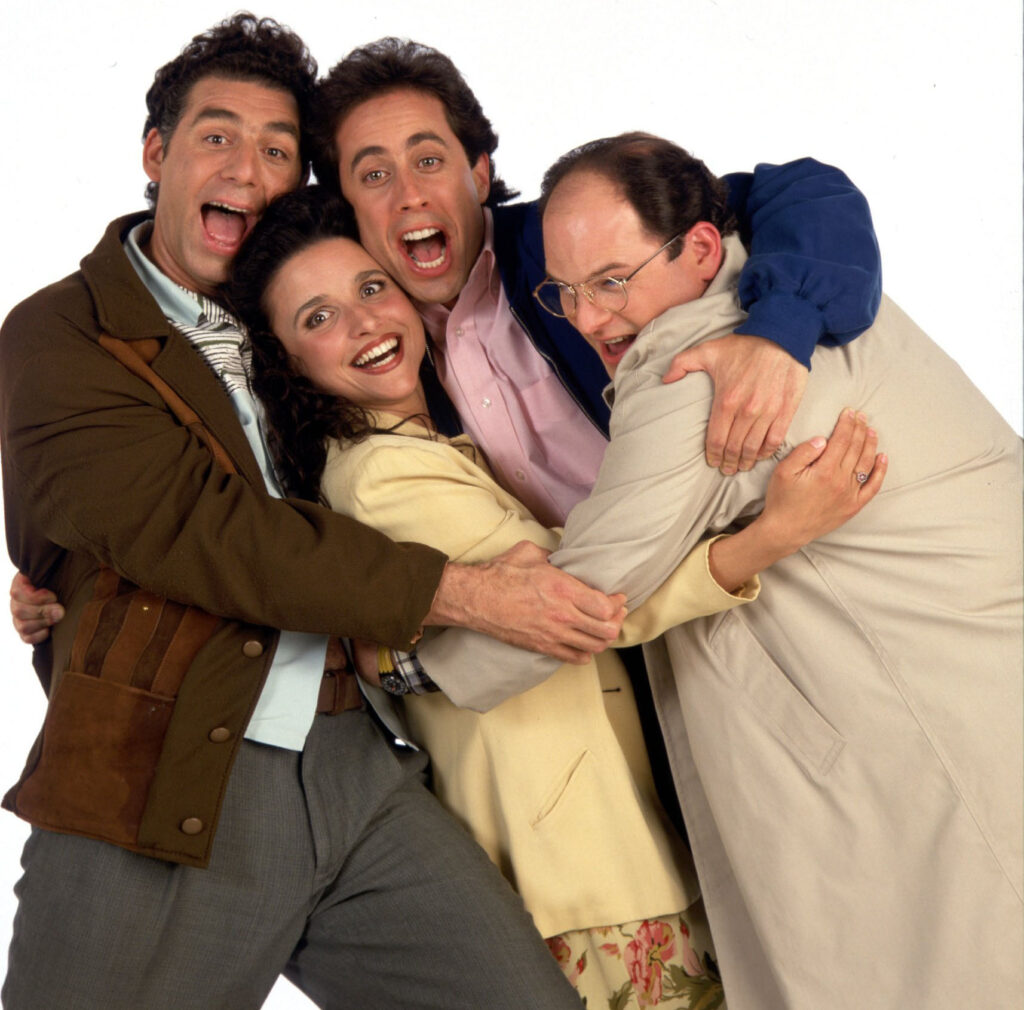 It’s been 30 years since “Seinfeld” catapulted Jerry Seinfeld, Julia Louis-Dreyfus, Jason Alexander and Michael Richards into superstardom. But the sitcom, which premiered (as “The Seinfeld Chronicles”) July 5, 1989, featured other familiar faces too.

They just weren’t familiar at the time.

Before starring in hit TV series from “Lost” to “Breaking Bad,” many now-established performers booked guest roles on “Seinfeld” early in their careers. Decades later, Bob Odenkirk, Patton Oswalt, Kathy Griffin, Daniel Dae Kim and Molly Shannon recalled their awe and trepidation when they first stepped onto the set of the show about nothing, which evolved into what Odenkirk called a “top-notch, economically run laugh machine.”

By the time he made his “Seinfeld” debut as Ben, Elaine’s almost-doctor-boyfriend in Season 8’s “The Abstinence,” the actor already had experience working on comedy series such as “The Ben Stiller Show” and “Saturday Night Live,” but “Seinfeld” marked another level of efficiency and professionalism.

“It was this very well-run machine of hilarity, with total pros all around me — something I wasn’t entirely used to,” Odenkirk said. “I come from a scrappier background where there’s less money involved, and people were really Scotch-taping their way through making shows.”

To this day, the “Better Call Saul” star still regards “Seinfeld” as “one of the best sitcoms ever,” ranked among BBC’s “The Office” and “The Royle Family.” And its pop-cultural significance wasn’t lost on him when he sat down for the table read.

“It was obviously intimidating because it was such an excellent show, and the confidence that everyone exuded in executing it, by that point, was very strong,” Odenkirk said. “But it wasn’t unwelcoming. Sometimes when (people) are that sure of themselves, you can really feel like an outsider. I’ve had that experience, but that wasn’t the case.”

For Oswalt, “Seinfeld” marked a major milestone: his first acting credit. The comedian and “Veep” star, who also appears in the forthcoming revival of “Veronica Mars,” scored a one-off role in the sitcom’s seventh season as a video store clerk. And he, like Odenkirk, was amazed at the streamlined production process. 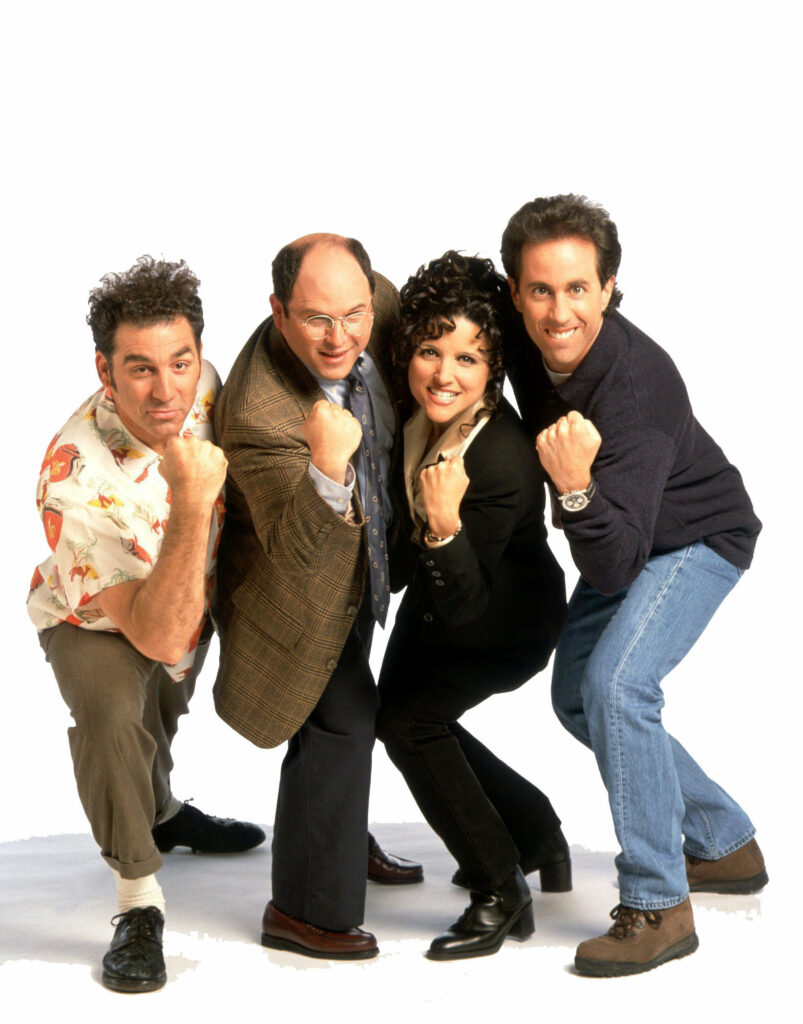 “They almost shot the episodes in real time,” Oswalt said. “It wasn’t even machinery at that point. It was like watching a dance company that could just do every move, and comedically, it was stunning.”

Luckily, he shared his scene with Alexander, whose playful off-screen sarcasm was the perfect remedy for any jitters.

“Right before it started, he just went, ‘Never too late to be fired, Patton. OK, have fun!’ “ Oswalt said. “He made such a joke about it that it put me at ease.”

Though “Seinfeld” was not her first TV gig, Griffin experienced a similar feeling of anxiety stepping into her role as chatterbox Sally Weaver in Season 7’s “The Doll.”

“To walk onto that set for a table read and see that cast, which was obviously by then so legitimately iconic, I admit, I had to take a minute and calm my ass down and go, ‘All right, Kathy, you’ve been an actress since you were 17 years old. Try to keep it together,’ “ Griffin said. “That is something I won’t forget.”

Like Odenkirk and Oswalt, Griffin found the cast to be welcoming and supportive — except for Seinfeld. In fact, she disliked the star comedian so much that she later spent part of her 1996 appearance on “HBO Comedy Half-Hour” bashing his behavior.

Soon after the program aired, Griffin received a “super condescending but funny” letter from Seinfeld, and their exchanges became the premise for her second “Seinfeld” appearance: In Season 9’s “The Cartoon,” Sally performs stand-up at Jerry’s expense. But on set, their relationship took a positive turn.

“I just fell in love with him, then, because I was like, ‘Oh, my God — a giant, A-list celebrity who actually has a sense of humor about himself,’ “ Griffin said.

“Lost” alumnus Kim was also surprised to see Seinfeld in a rare behind-the-curtain moment when he arrived on set to film his scene in Season 9’s “The Burning.” Kim, a super-fan who “had literally seen every single episode of the show,” was forced to do a double take when he glimpsed the comedian casually munching on a bowl of cereal straight from one of the prop boxes in his on-screen apartment.

Seinfeld’s next move shocked him even more.

“He said to me, ‘Daniel, you were really funny in the audition,’ “ Kim said. “Because I was getting a compliment from Jerry Seinfeld, the only thing I could think of was, ‘Thanks! You’re not so bad yourself.’ And then he paused, and he said, ‘Yeah, I do OK.’ That was my first conversation with Jerry, and I’ll never forget that moment.”

To the relative newcomers, earning Seinfeld’s approval was a big deal. “Saturday Night Live” alum Molly Shannon, who most recently appeared in Comedy Central’s “The Other Two,” still fondly remembers how he reacted to her audition to play Elaine’s eccentric co-worker Sam in Season 8’s “The Summer of George.”

“Jerry really laughed when I showed him a demonstration of a girl with long arms walking quickly, with her long arms not swinging as she walks,” Shannon said. “I loved that I made Jerry laugh. I really do have long arms, so I think I lucked out in that I was right for the part.”

Despite the credits they’ve amassed since, the stars still wear their stints on “Seinfeld” as a badges of honor and consider the show a key résumé builder. Kim, now an executive producer (with a recurring role) on ABC’s “The Good Doctor,” is proud some still recognize him as the medical student who identified Kramer’s gonorrhea.

“It was a real feather in my cap,” Kim said. “It’s been a little while since then, but the legacy of that show is indisputable.”

Though Shannon had already begun to make a name for herself as the nerdy Mary Katherine Gallagher on “Saturday Night Live,” booking “Seinfeld” was a “life-changing” moment — especially when it meant getting to partner with another “SNL” veteran, “comedy legend” Louis-Dreyfus.

“I had wanted to get cast as a guest star on that show ever since it first began, and my dream came true,” Shannon said. “The comedy writing is brilliant. What Jerry and Larry (David) did was legendary. Each comedy episode was a little brilliant puzzle with everything that’s being set up and paid off in such a clever way.”

For Odenkirk, the beloved sitcom served as an example of comedic excellence, both from an acting standpoint — going toe-to-toe with an “insane pro” like Louis-Dreyfus — and from a writer’s perspective.

“Everybody probably aspires to work on that level if they write comedy, but it’s rarely achieved,” Odenkirk said. “I don’t think it’s changed how I approach comedy, but it is certainly a high watermark to try to aim for.”