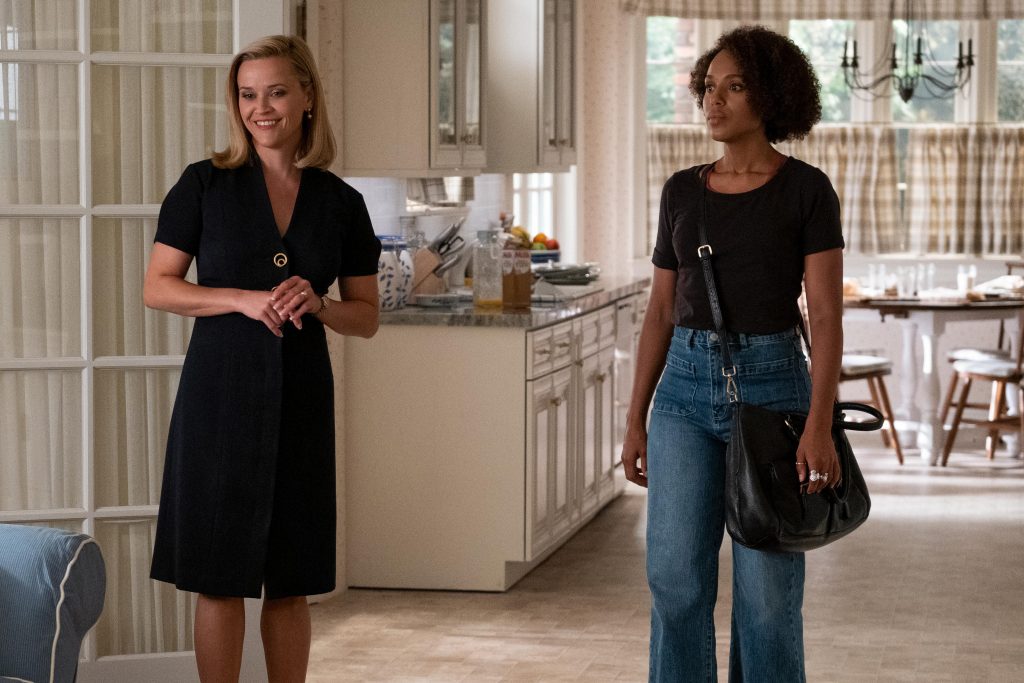 Engaging melodrama and stumbling social commentary meet in “Little Fires Everywhere,” Hulu’s eight-part adaptation of Celeste Ng’s bestselling 2017 novel of the same name, which opens with a well-to-do woman watching in disbelief as her suburban McMansion burns down.

Keeping up appearances while getting to the bottom of things is a dangerous combination in this not too heavy, not too light miniseries about what happens when a planned community is upended by unplanned events. Casual quarantine viewing wasn’t likely the goal of “Little Fires Everywhere,” but it hits that middling mark and arrives at the opportune time for content-hungry shut-ins.

The series features co-producers Reese Witherspoon and Kerry Washington as fiercely protective mothers from very different walks of life. The women’s worlds blow apart when their paths collide, and questions of class and race threaten family alliances and long-held community beliefs about justice and equity.

Set in the late 1990s, it begins with the Richardsons, an affluent, white, oh-so-perfect family of six with deep roots in Shaker Heights, Ohio, an unbelievably hermetic Cleveland suburb where public school students naturally matriculate to Harvard and an overgrown front lawn equals a city fine and deep social shame. Family matriarch Elena (Witherspoon) is the region’s premier poster wife and mother.

Then transient single mom Mia Warren (Washington) and her teen daughter, Pearl (Lexi Underwood), roll into town in their broke-down blue Chevy hatchback. First they rent a property from the Richardsons, then the families’ lives become even more intertwined when Mia takes on domestic work in Elena’s home and their teenage kids become friends, and lovers.

Shaker Heights’ community ethos — that “everything should be planned out, and that by doing so you could avoid the unseemly, the unpleasant and the disastrous” — is rocked to its core when the moms eventually clash over the parental rights of Mia’s co-worker at her second job in a Chinese restaurant, Bebe Chow (Lu Huang), a poor immigrant from China who’s in search of her abandoned child.

The problem here is that Witherspoon’s entitled housewife who thinks she’s progressive (spoiler alert: she’s not) looks a lot like her character in “Big Little Lies,” though more fastidiously groomed and less introspective. She can’t help but swing her hair when she walks.

Washington’s struggling, down-on-her luck Mia is equally narrow. The strapped artist is always angry, always ready to blow, always ready for a fight. She’s been on the losing end of systemic racial and gender bias, and her face is set on permanent scowl.

When the clueless yet strident Elena has it out with her and accuses Mia of making terrible choices as a mother, she dishes out the obvious retort of what choices?! She never had the “options that being rich and white and entitled” gave her counterpart.

Clumsy dialogue aside, “Little Fires Everywhere” is entertaining as a high-end soap opera driven by star power, a little bit of mystery and lots of ‘90s pop culture references. Suburban life plays out over the music of Liz Phair and TLC, clips of Ricki Lake and “The Real World.” Elena’s book club squirms while gingerly discussing “The Vagina Monologues,” and it’s un-ironic when the kids wear high-rise shorts.

Adapted for television by Liz Tigelaar, “Little Fires Everywhere” is reportedly faithful to the spirit of the book — co-producer Ng consulted on the scripts for the hour-long episodes — but heightens the importance of race in the narrative, particularly regarding Mia, whose race isn’t marked in the novel.

The teens here are the best part of the show, particularly the overachieving Pearl. Underwood convincingly plays an independent, emotionally torn young woman whose exceptional maturity is a clear reaction to being raised by a self-centered, unstable mother. Elena’s gentle son, Moody (Gavin Lewis), develops a crush on her, though she begins to gravitate toward his older brother, Trip (Jordan Elsass), a lunk-headed jock. The youngest Richardson sibling, Izzy (Megan Stott), is an outcast misunderstood by her cruel classmates and preppy mother. When she befriends like-minded eccentric Mia, the literal fireworks begin.

The adults, on the other hand, carry the burden of representing archetypes in the series’ class war. Elena’s lawyer husband, Bill (Joshua Jackson), for example, is a good provider/lousy listener more interested in her procurement of the dry cleaning than her relationship with the kids. He announces “Honey, I’m home!” after his long work day. She starts that day arranging color-coded sack lunches for the children.

Motherhood, in all its pain and joy, is a recurring theme here, inspiring lines so good they cut to the bone. As Elena, after a glass or two of wine, laments of her rocky relationship with Izzy, “You take it for granted that they’ll love you forever. That they’ll love you at all.”

“Little Fires Everywhere” is not a searing masterpiece nor a flaming disaster. It’s a fast, easy-to-watch drama where family relationships are the kindling and social mores an accelerator. Watch it all go up in flames.