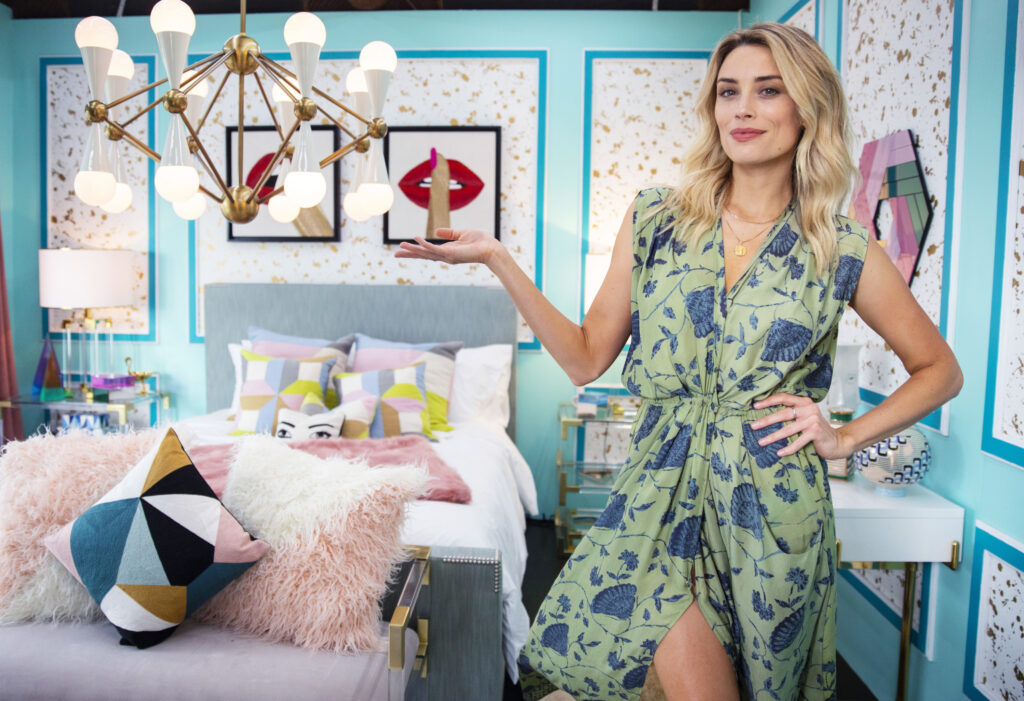 ‘Love Island’: 10 things you need to know about the reality TV sensation

On Tuesday, the latest phenomenon to come out of the United Kingdom was to make its way stateside in a bid for American popularity. The reality TV show, which will air five nights a week on CBS, is a dating competition in which unnaturally attractive young singles live in a tropical villa together. Immediately upon their arrival, 11 contestants are asked to choose someone of the opposite sex to couple up with, based solely on appearance. Couples — who are expected to share a bed together starting on the very first night — compete in challenges, go on dates and try to withstand the temptation of new Islanders, who are continually sent into the villa over the course of the season. At the end, the public votes on the winning couple, who take home a cash prize.

But as much as “Love Island” is about, well, love, it’s also not. So much of what makes the U.K. version work is watching the friendships form between housemates. Because there’s no outside stimulation — internet, books and TV are prohibited — the Islanders form bonds quickly and derive pleasure from mundane things. The highlight of a day, for instance, might be spying on a couple sharing their first kiss, or spending an inordinate amount of time getting ready to sit by the pool at night instead of during the day.

You might think that sounds like watching paint dry, but because the show is on every weeknight, it’s easy to become invested in the contestants. Unlike the U.K. version, which takes place in Majorca, the U.S. “Love Island” is being shot in Fiji. That means there’s a 16-hour time difference between the South Pacific island and New York, giving editors a brisk turn-around time to package the action for television. The first episode of the show on Tuesday night will be made up of footage recorded on Monday morning.

With help from “Love Island” executive producer David Eilenberg — the reality TV vet behind shows like “Hell’s Kitchen” and Netflix’s “Queer Eye” reboot —here are the 10 things you need to know about the show before Tuesday night’s premiere.

OK, but seriously. You’re telling me this isn’t boring? What do these people do all day?

Honestly? Not that much. A typical day in the “Love Island” villa follows the contestants as they wake up, pick out their bathing suits, make tea, tan by the pool, work out, shower, do their hair and makeup, return outside to the pool and hang out by fire pits. Every few days, there will be a challenge, but they’re never serious — like riding a mechanical bull, or a food fight. Sometimes couples get to go on dates, but they’re usually not extravagant like on “The Bachelor” — they might get a bottle of Champagne under some lanterns in the front yard.

“It really plays in a much different way than ‘The Bachelor’ does,” Eilenberg says. “That’s a dramatic show, and we think of ‘Love Island’ as an ensemble romantic comedy. It speaks to a totally different viewer, and both can exist. One of the hallmarks of a romantic comedy is that even though there are leads, there are usually multiple couples you can root for — and that rootability has become an essential part of the show.”

The most dramatic nights are ones on which the Islanders have to “re-couple,” meaning they must decide whether to dump or continue dating their partner. To complicate matters further, new contestants who are sent into the villa throughout the season have been watching from home, and usually have their eye on a specific person they want to date. (This also means that casting is still open, meaning you could apply to be on the show if anyone on the first episode strikes your fancy.) 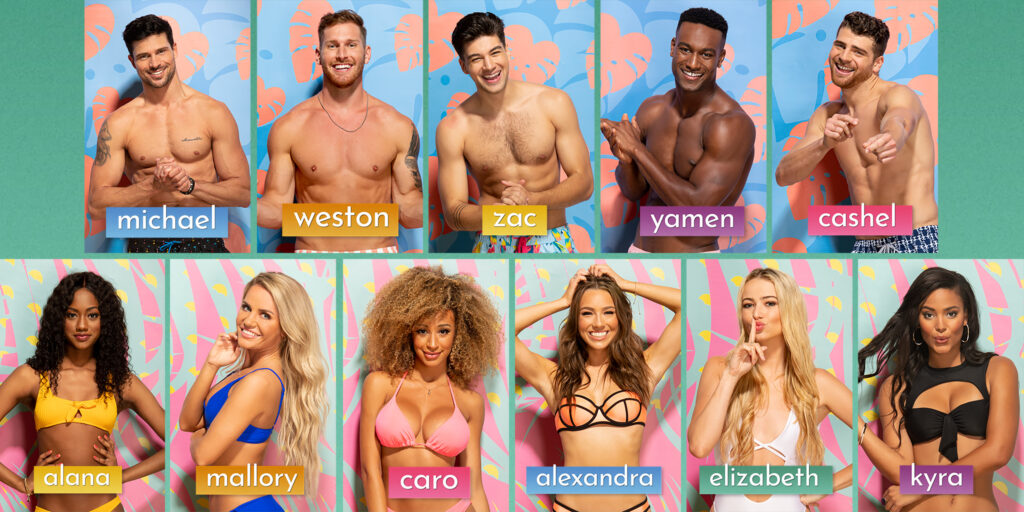 TIMOTHY KURATEK / CBS ENTERTAINMENT
Meet the Islanders who are looking for love this summer on “Love Island.” Eleven singletons are ready to find their perfect matches when the U.S. version of the international reality sensation debuts with a special 90-minute premiere, Tuesday, July 9, at 8 p.m. on CBS.

How long does it last?

The U.S. version will consist of 22 episodes produced over five weeks. That’s shorter than the U.K. iteration, which typically lasts about eight weeks and has 50 episodes. The fifth season of U.K. “Love Island,” by the way, began airing abroad on June 3, and it’s available to watch on Hulu — though episodes post on the streaming network roughly three weeks after playing in Europe.

Will the clothes be as skimpy as they are on the U.K. version?

On U.K. “Love Island,” the women often wear bathing suits that expose their entire behinds or the underside of their breasts, while the men prance around in skintight jeggings and tighty whities. Will that fly on CBS?

“It’s gonna feel like ‘Love Island,’” Eilenberg promises. “We’re a body-positive show. We have a cast who are proud, often, of their appearances and physical fitness. I expect they’ll want to show that off. If you’re in it for the visual splendor of the Islanders, there will be plenty of that.”

Why do they share beds? Is there a lot of sex?

There’s not that much sex on the U.K. version because everyone sleeps in the same room. Night vision cameras reveal couples kissing but don’t often show much more. Occasionally, a man and a woman get to spend a night in a private room called “the Hideaway,” and the morning after, they’re both peppered with questions from the other Islanders about what went down behind closed doors.

While couples are expected to share beds, they aren’t required to, Eilenberg notes. “I think the way that ‘Love Island’ plays it, that feels like a very natural part of the experience. As much as TV dating shows have a heightened element to them, part of what’s driven people to like ‘Love Island’ so much is a question of, how do you build genuine connection?”

How drunk do they get?

Not that drunk. On the U.K. version, contestants are limited to two alcoholic drinks per night, and the same policy applies on the U.S. version. “We are not about excessive alcohol consumption in any way,” Eilenberg says. “We think that policy has been better for the show in terms of the classiness of it and the ultimate goals, which are to drive dialogue and establish genuine connections.”

Will the show be as fun without the cheeky British slang?

One can dream. As American viewers who’ve tuned into U.K. “Love Island” are aware, much of the show’s charm comes from the quirky sayings the British and Scottish contestants use. If a guy dumps you and goes immediately for a new girl, you’ve been “mugged off” or “pied off” — made a fool of. A new hottie comes into the villa who attracts your attention? Your “head’s been turned.” Islanders who are hot are referred to as “proper fit.” If you’re really excited about going out with someone, you’re “buzzing.”

“We’re mining for prospective American [idioms] that makes sense for us,” admits Eilenberg. “Really all of this emerges from actual dating culture. Hopefully for viewers who are not singles themselves or dating, there will be that same sense of discovery.”

Is there a host?

Yes, but she’s not a huge part of the show. Or at least Caroline Flack, who hosts the U.K. version, isn’t. She comes to check in on the Islanders every now and again, but not on a regular schedule, à la Chris Harrison during a “Bachelor” rose ceremony. U.S. “Love Island” will be hosted by Arielle Vandenberg, a comedian who has 1.2 million followers on Instagram.

What about a narrator?

One of the best parts of U.K. “Love Island” is its Scottish narrator, comedian Iain Stirling, whose voiceover guides viewers through each episode. While Stirling is there to move the action along, he also pokes fun at the Islanders — pointing out ridiculous outfits or lines of conversation that viewers are simultaneously laughing at. U.S. “Love Island” will have voiceover too, though it’s still a secret who will serve as the voice of reason.

“One of the things that Iain does that’s so great is to be the friend on the couch who’s sort of poking fun at the show, but it’s clear he’s also enjoying every bit of it,” says Eilenberg. “We’re not mean about our contestants, but we are having fun with it.”

Will contestants be familiar with the format of the show?

“The people that we cast were in many cases already familiar with the British version, and even for those who weren’t, they made themselves familiar with it,” Eilenberg explains. “It’s very much to our advantage that all of our Islanders know what they’re walking into it, and they’re really excited about it.”

The crew is familiar with the series too — many of the staffers are producers and editors who have worked on international versions of “Love Island” in Australia, the U.K. and Germany. “It’s such a demanding production model that you really want to have that institutional knowledge of how to execute the show,” says Eilenberg.

While the U.K. show has been set in and around the Mediterranean, Eilenberg said CBS went with Fiji — where “Survivor” also shoots — because it “meant something to Americans.”

“It feels like a place you would want to come and fall in love.”