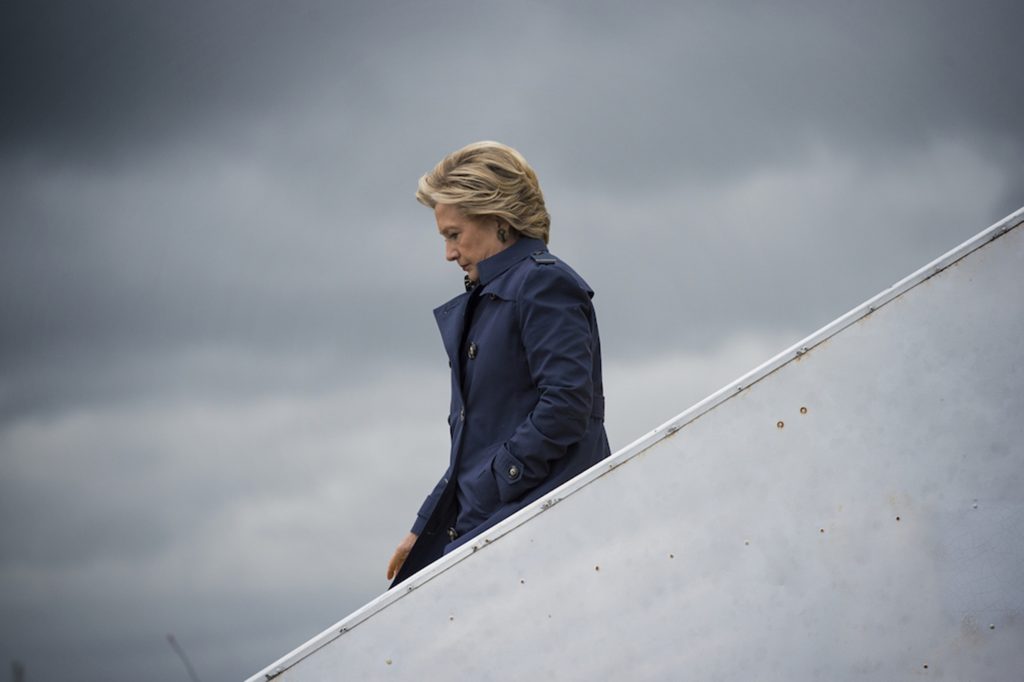 In January, as her fellow Democrats were crisscrossing the icy cornfields of Iowa and her former Senate colleagues were in Washington, D.C., bracing for the impeachment trial, Hillary Clinton was in sunny Southern California running on a ticket of a different sort.

The former Secretary of State, two-time presidential candidate and human lightning rod was at the Television Critics Assn. press tour to discuss the Hulu documentary series “Hillary,” which combines a biographical portrait of Clinton with a behind-the-scenes look at her failed 2016 campaign.

When a publicist from the streaming network reminded the audience there would be no post-panel scrum — the traditional offstage huddle with reporters — Clinton joked, “I was sort of looking forward to the scrum.”

She’s certainly willing to mix it up in “Hillary,” which is available to stream on March 6. For a public figure often accused of being inauthentic, cagey and overly cautious, the Hillary Clinton on display in the four-part docuseries, directed by Nanette Burstein, is candid and acutely self-aware — not to mention blunt.

Speaking more freely than she might have in her uncharted role as the first female nominee of a major political party, Clinton vents about the burden of being a woman in politics and expresses palpable disdain for former rival Sen. Bernie Sanders. In comments that have already fueled an outraged news cycle, she slams him as an ineffective career politician disliked by his colleagues in Congress.

If she still suffers from “a responsibility gene,” as she claims at one point in the series, she clearly gives fewer you-know-whats than she once did.

“I thought, you know, now or never. I’m not running for anything. I might as well try to tell my story. Maybe it will be of interest to people,” says Clinton on the morning of her TCA panel. The former first lady sat for 35 hours of probing personal interviews for the series — a difficult process for a figure wary of the media. “It actually was a very positive experience in the end,” she adds, “though not every minute of every hour was a positive experience.”

In a considerably shorter sit-down with The Times, Clinton touched on a range of subjects outside of politics, including TV — she’s catching up on “The Crown” and recently had dinner with “Fleabag” star Phoebe Waller-Bridge, in case you’re wondering. With a ready laugh and the skilled politician’s habit of addressing people by name during conversation, she is engaging and, yes, likable.

But she is also tirelessly on message when it comes to the 2020 election, repeatedly highlighting threats to the integrity of the democratic process. And she doubles down on her criticism of Sanders, suggesting the Vermont independent has tolerated and even approved of sexist attacks against her and other women, such as Sen. Elizabeth Warren.

“Hillary” will arrive three days after Super Tuesday, in the throes of yet another chaotic Democratic primary, when the party is unified in its desire to defeat Trump but divided over which candidate is best equipped to do that. Some have accused Clinton of dredging up the past at a time when Democrats should be focused on the future.

But that’s not how she sees it.

“There is not a week, sometimes not a day, that people don’t approach me, start to cry, and tell me how important the campaign was to them and all of their feelings,” she says. “I would have been, I think, turning my back on the campaign we ran and the policies I put forward if I’d gone away.”

‘People idolize her or they vilify her’

Throughout the 2016 campaign, Hillary Clinton was trailed by videographers who captured roughly 2,000 hours of footage for what might have been a film chronicling the historic election of the country’s first woman president.

It didn’t turn out that way.

After the election, Clinton and her longtime aide, Huma Abedin, met with Propagate Content, a production company with experience in nonfiction storytelling, about the possibility of shaping the material into a different kind of documentary. “It was a great opportunity to tell the story of one of the most interesting, influential and misunderstood politicians of our time,” says executive producer Howard T. Owens.

It turns out Burstein, co-director of the Robert Evans documentary “The Kid Stays in the Picture,” had also been angling to make a film about Clinton, someone who’s been “a big, emblematic part of my life since my 20s,” she says.

Burstein saw an opportunity to create an ambitious, wide-ranging biography that would tie in the history of the women’s movement and the evolution of partisan politics — and, hopefully, provide some perspective on a uniquely polarizing figure in American life.

“People idolize her or they vilify her,” says the director. “She’s so black or white to people. But within that there’s a real human, who’s had real experiences. Let’s unpack that, because there’s so much to be learned.”

Woven together from intimate campaign video, interviews with Clinton and her inner circle, and archival footage, “Hillary” cuts between two timelines: the long, brutal 2016 campaign and Clinton’s life story, following her journey as an ambitious working mother who reluctantly changed her name and softened her image once her husband got into politics. Gender is an ever-present theme.

This structure helps place Clinton’s failed presidential bid in historical context. As a woman who came of age at the height of Second Wave feminism and chafed at the confines of her role as first lady, Clinton personified larger debates about women’s place in society and became a central figure in the still-roiling culture wars. “Hillary” also sheds light on how the scandals that marred Bill Clinton’s presidency — some ginned up by Republican rivals and propelled by sensationalist media coverage — led to a wariness that some saw as dissembling.

It isn’t hagiography, though. The series also contains interviews with journalists who offer more critical perspectives of Clinton, including the New York Times’ Peter Baker.

Burstein hints that Clinton and her team found the documentary “more on the negative side than other people will think,” but also says Clinton, liberated from the tyranny of public opinion polls, didn’t intervene in the filmmaking process. “Most of her adult life she’s had to be careful. And now she doesn’t.”

The director also insists the timing of the documentary’s release is a coincidence. “We finished this now because that’s when it was done. If anything, I didn’t want to [release it now], because an election sucks up all the oxygen.”

Clinton watched all four hours in one go — “I just took deep breaths a lot” — and stops short of offering criticism. “There were people who were interviewed in the film who were surprising to me,” is the closest she gets to negative feedback, “But I didn’t second-guess the decisions [Burstein] made. She knows more than I do about how to put together a film about a complicated period in history.”

Clinton describes watching “Hillary” as an edifying experience, particularly when it came to understanding how she inadvertently fed into the perception that she is evasive or shifty. “I learned that lots of times I didn’t know how something I said would be taken and I think I got increasingly guarded and gunshy about really expressing myself as openly or clearly as I should have.”

‘I’m glad to be on the other side of it’

Though it offers a largely sympathetic portrait, “Hillary” delves into painful moments from Clinton’s decades in public life.

A significant amount of time is devoted to her husband’s affair with White House intern Monica Lewinsky and the personal and political crises it created. In the series, Clinton reveals she didn’t talk to him for weeks after he admitted to the indiscretions, which he’d initially denied. We also hear from Bill Clinton himself, who expresses regret over — but doesn’t quite apologize for — the way Lewinsky’s life was defined by the scandal.

In person, Clinton says the subject was hard to revisit, even after two decades.

“The whole impeachment saga and the terrible pain in our family and all of that was difficult, as it always is, even to think about,” she says. “Feeling very positive about the decisions that I’ve made in my life, even the most difficult ones, doesn’t make it any easier.… I’m glad to be out on the other side of it all these years later.”

“Hillary” makes the case that Clinton has paid the price for her husband’s missteps, which have been weaponized against her — never more vividly than when Donald Trump invited Bill Clinton’s accusers to an October 2016 debate to deflect attention from the “Access Hollywood” tape. Clinton’s decision to stay in her marriage “haunts her in a way that she can never get out from under,” says Jennifer Palmieri, communications director on the 2016 campaign.

But Clinton rejects the notion that her husband, whom she describes as a “once-in-a-generation political talent,” has cast a shadow over her career. “Look, what would the alternative be? I married him when I was very young. I never thought I’d run for public office. I decided I’d run for the Senate in 1999 when I was 52 years old. And I think his support, his advice, has been far more positive and helpful to me than anybody else’s.”

“Hillary” also examines the time-sucking toll of being a woman on the campaign trail. At one point, Clinton estimates she spent 25 days getting her hair and makeup done while she ran for president in 2016 — a far cry from her law school days, when she sported big glasses, frizzy hair and a clean face. She is grateful that Burstein “understood the importance of trying to tell that part of the story,” she says.

“There weren’t any role models for me to compete twice for the presidency, to be the only woman in the stage, to be the object of intense microscopic analysis where every single hair and word was analyzed endlessly. I got much more scrutiny than my male counterparts did. I had much less of a margin I could operate on, and I was making it up as I went. I couldn’t go, ‘Oh, well, how did so-and-so do it?’”

Asked whether she was ever tempted to emulate the famously rumpled Sanders, Clinton responds, “You can’t do it though, can you? It’s considered charming or whatever for men. Boris Johnson, he deliberately messes up his hair. People say, ‘Sure, a woman could do that.’ Yeah? Show me one.”

Although Clinton grappled with her stunning defeat in the 2017 memoir “What Happened,” the trauma of the event looms over “Hillary” — and our conversation.

“If I’d lost to a normal Republican, I would have been disappointed but I wouldn’t have been as disturbed and worried as I am,” Clinton tells me. “I thought after the election, well maybe [Trump will] rise to the occasion. Unfortunately, he’s been worse than I thought he would be. I take it very personally because I don’t understand to this day all that happened in that election and I feel terrible that I couldn’t pull it off despite the headwinds that I faced, because it’s been so awful for our country. Four more years would be really damaging.”

To that end, Clinton tells me she’s spoken to most of the 2020 Democratic contenders —some numerous times — warning them to be ready for more foreign meddling, disinformation on social media and Republican-led voter suppression.

“Here’s what I say to them: Look, you can run the best campaign, you can get the nomination, and you can still lose because of all these other factors at work,” she says.

“It’s unbelievable. They’re not even trying to hide it. They tried to hide what they did to me. I don’t know, we’re really in a life-or-death political struggle here,” she adds with a mirthless laugh.

And she is adamant that the “life” in life-or-death means nominating “somebody who can beat Trump” in the electoral college: “Everything else is a sideshow.” As for who that is? Clinton’s not ready to be that blunt. Yet.