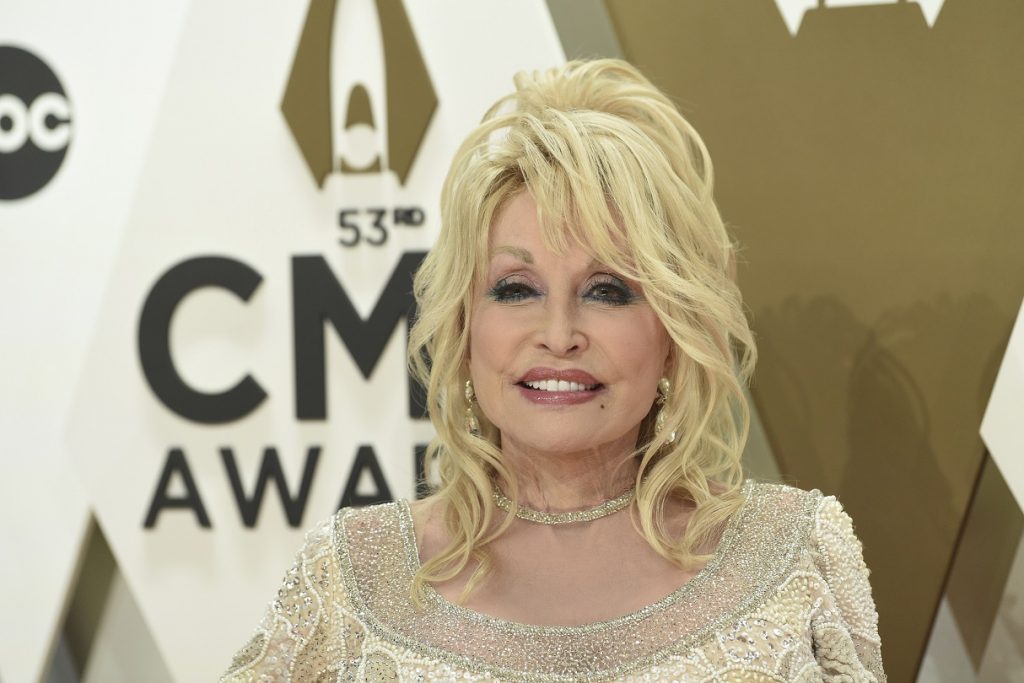 When the great Rod Serling hosted the original “Twilight Zone” anthology series some 60 years ago, he was the ultimate Grim Reader — a no-nonsense, cigarette-cupping, blunt and straightforward bearer of bad news in black and white.

For the very definition of a polar opposite approach to TV series hosting, ladies and gentlemen: Dolly Parton.

Decked out in colorful, sparkling costumes and fantastic wigs, walking through the fabulously kitschy Dollywood and filling the screen with her legendary charm and warmth, the 73-year-old national treasure is the host and inspiration for “Dolly Parton’s Heartstrings,” a Netflix original series with an initial run of eight episodes, each based on one of Parton’s most memorable songs.

As Dolly tells us in the intro to the episode of the same name, she once met a fan with the unusual name of Jolene, and then, “one day, many years later, I caught my husband flirting with this redheaded hussy at a bank, and the rest has become music history. …

“We’ve all felt insecure about something. We’ve all felt like we might lose someone we love to someone else because we’re not good enough. And that’s what this song is all about.”

The “Jolene” episode features Julianne Hough in a winning performance as the title character, a talented but insecure aspiring country singer who has flings with married men as a way of shielding herself from getting emotionally involved.

Parton plays the proprietor of the rough-and-tumble honky-tonk joint where Jolene serves drinks and occasionally takes the stage. (Parton and Hough are terrific performing a duet.)

Dallas Roberts’ Aaron and Kimberly Williams-Paisley’s Emily are a married couple mired in a deep and serious funk. Emily becomes friends with Jolene, and is stunned to find out her husband and Jolene might be contemplating an affair.

Thanks to some deft writing and the heartfelt performances by the lead ensemble players, “Jolene” takes some surprising yet authentic turns.

If you’ve never heard the title song, this story still works as a well-crafted, stand-alone drama. If “Jolene” is one of your all-time favorite songs, my guess is this dramatization will only enhance your love of the tune and have you examining the lyrics in a whole new light.

In the intro to another episode, “These Old Bones,” Dolly talks about how she started writing songs about the real people in her life at a young age. This is the launching point for an unabashedly sentimental, irresistibly moving, feature film-length episode with distinct echoes of corny-but-also-great movies such as “Miracle on 34th Street.”

Our story is primarily set in the Great Smoky Mountains in 1944.

The magnificent Kathleen Turner is a bass-voiced force of nature as Miss Mary, aka Bones, an eccentric and intimidating and scary local legend who lives deep in the woods, gives psychic readings to the neighbors who dare cross her door, and is rumored to be a witch.

A powerful conglomerate with Washington, D.C., connections wants to buy up the land owned by Miss Mary and her neighbors (for the usual nefarious reasons). Miss Mary has been advising everyone to resist the overtures, which results in a civil lawsuit against Miss Mary.

Even when some plot points stretch credulity to the limit, Ginnifer Goodwin does fine work as the ambitious, hotshot attorney who returns to her hometown to make the case against Miss Mary, and is the last person in this story to figure out certain plot reveals we can see coming a mile away.

With immaculate, polished, freshly varnished sets (including double-matte-framed portraits on the walls) and some conveniently tidy plot resolutions, “These Old Bones” is at times a glossy and overly sentimental memory piece, but it’s in keeping with Miss Dolly’s take on the world:

A lot more sunlight than twilight.