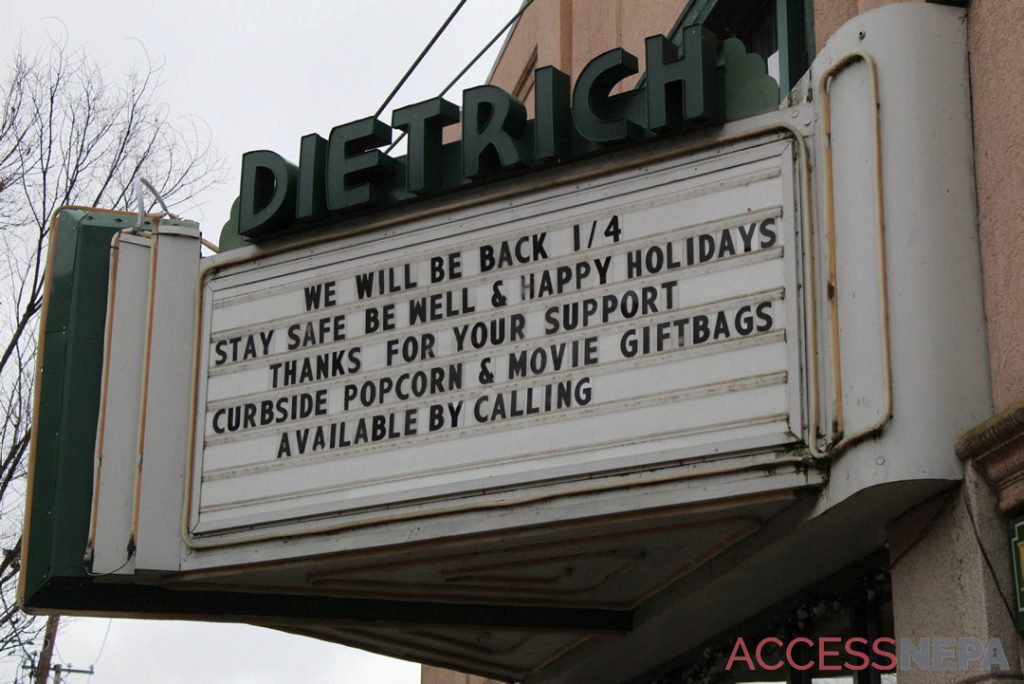 The Dietrich Theater was in the midst of one of its busiest times of the year, the holidays and also in the middle of its 12 Movies of Christmas festival, and was getting ready for its annual showing of ‘It’s a Wonderful Life’ on Dec. 15.

Then the state ordered the closing of movie theaters across Pennsylvania through Jan. 4 as part of the latest round of mitigation efforts to prevent the further spread of COVID-19, canceling the Dietrich’s holiday festivities until 2021.

After the announcement came out last Thursday (Dec. 10), Dietrich Executive Director Erica Rogler said she was overwhelmed by the community support that the theater was receiving.

“Although we were saddened and frustrated by the closure, our spirits lifted when we saw the community response,” Rogler said. “”We were encouraged because of the public’s willingness to help in any way that they could.”

Although the movie screens will be dark the rest of the holiday season, the Dietrich is still looking forward to spreading holiday cheer during the closure.

On Friday’s, Saturday’s and Sunday’s during the shutdown, the Dietrich will have curbside pickup for popcorn sales, so customers can bring a taste of the Dietrich home with them when watching holiday movies. Movie gift bag sales for holiday gifts have also continued, and people can call the Dietrich offices Monday through Friday from 9a.m.-4:30p.m., to place orders for curbside pickup.

“The response for the popcorn and gift bag sales has been overwhelmingly positive,” General Manager and Film Booker Ronnie Harvey said. “People were calling us saying they were willing to come and help volunteer to sell stuff. Those calls help solidify our mission.”

“It makes us feel that what we do is valuable to the community, and they are determined to see us here to stay,” Rogler added.

This is not the first time that the Dietrich Theater has had to close to the public. The theater was shut down from March-early June because of previous restrictions. Rogler said that she and her employees could feel that another shutdown was coming, but that the theater has lived through this before, and will survive through it again.

Although, the public won’t be able to gather and watch Jimmy Stewart’s famous movie on the big screen this year, Harvey reminds everyone that “it’s still going to be a wonderful life at the Dietrich Theater, even if people can’t be there physically.”

In these tough times, the Dietrich Theater has one message to all the people of Wyoming County and beyond.

“Thank you so much for your ongoing support, we will continue to serve the community just like the community has served us,” Rogler said. “We wish everyone a happy holidays.”

The Dietrich will continue to offer its virtual cinema and virtual activities and classes during the closure. More information about those programs can be found on the Dietrich Theater website, www.dietrichtheater.com. The theater plans to fully reopen on Jan. 4 or when restrictions are lifted.