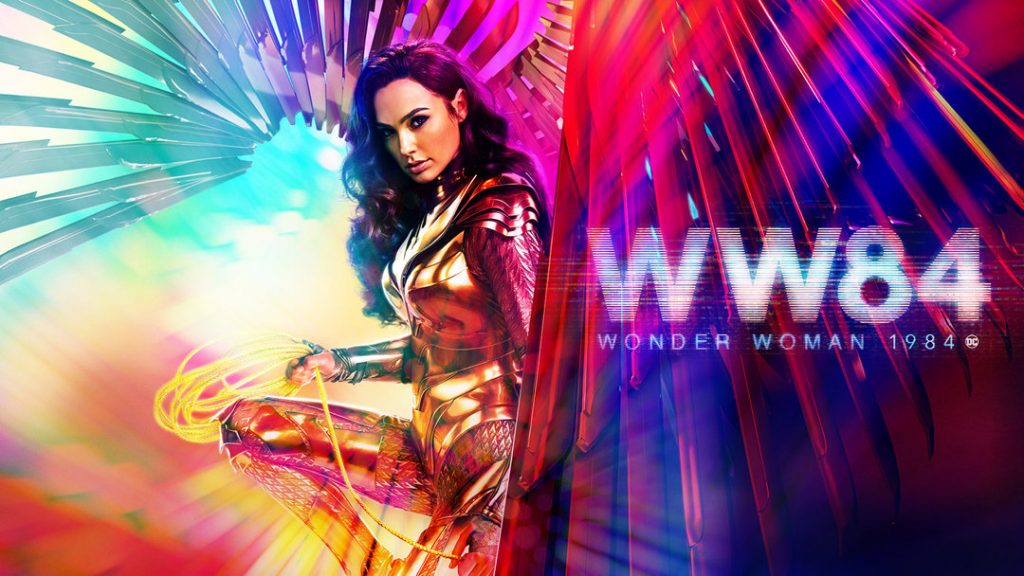 If you haven’t seen “Wonder Woman 1984” yet, do so! In the meantime, spoilers ahoy as we take a look at the stories and characters that inspired the movie:

Confession: I’ve never been a big fan of this character. She’s usually represented as one of Wonder Woman’s arch-foes — Cheetah is WW’s opposite number in the Legion of Doom, for example — but I never thought she was a believable match for a demigod like Princess Diana (played by Gal Gadot in the movie). Cheetahs are known for speed, capable of running at 50-80 mph. But the Amazing Amazon can see bullets in flight and move fast enough to deflect them with her bracelets. So there’s speed, and there’s *speed.*

Plus, it took a while to get to the iconic Cheetah we know. The first two villains to bear that name were Priscilla Rich (1943) and Deborah Domaine (1980), who just wore Cheetah costumes and weren’t terribly impressive. (Unless it was Halloween. They were very nice Cheetah costumes.) Barbara Ann Minerva (Kristen Wiig) didn’t come along until 1987, where she was introduced as a British archaeologist who was eventually turned into a Cheetah god by a bloodthirsty African plant god named Urzkartaga, whose consort she is.

(Yes, a feline consort to a plant god. It’s comics, so just roll with it.)

The movie corrects this problem, arranging events so that Cheetah is not only Wonder Woman’s equal when they first fight, but later her superior. I’m still not crazy about supervillains who look like escapees from “Cats,” but at least the cinematic Cheetah is a plausible foe for the Amazing Amazon.

For the record, there was briefly a male usurper Cheetah in 2001 named Sebastian Ballestros. The less said about that the better.

This object began its comic book life in 1963 as the Materioptikon, a device invented by the supervillain Dr. Destiny that brought dreams to life, which brought him into conflict with the Justice League. More than 50 years later, Neil Gaiman’s “Sandman” comics explained that the Materioptikon was powered by the “Dream Ruby,” created by the conceptual being Morpheus of the Endless, who poured his essence into it. It has since been destroyed, but why let that stand in the way of movie stardom?

This character has a number of antecedents in “Wonder Woman” comics, but you have to squint just right to find them.

In the movie, when Diana twigs to who destroyed the Mayan empire and made the Dreamstone, she mutters “Dechalafrea Ero … The God of Lies, Dolos, Mendacius, Duke of Deception. He’s been called many names.”

I couldn’t find a “Dechalafrea Ero” in Mayan mythology — or anywhere else for that matter. The best I could find was “Dechala, The Denied One,” a champion of Chaos in the “Total War: Warhammer” video game. “Warhammer Armies: Champions of Chaos 5th Edition” describes her as “one of the worst of the inhuman monsters who walk the waste” who “take[s] delight in all sorts of perversity and cruel vices.”

The second half of the first name, “frea,” might be a lift from Freyja, the Norse goddess of love, beauty and fecundity. Is it possible the screenplay writer stuck that name on there just to sound cool? I bet that’s also true of the last word, “Ero,” which is probably a corruption of Eros, the Greek god of love.

None of that says “trickster god” to me, and that’s what Dechalafrea Ero is supposed to be in “Wonder Woman 1984.”

But the Amazing Amazon did fight just such a divinity in the comics — and, interestingly, it was in 1984. He was Tezcatlipoca, an Aztec god whose name means “Smoking Mirror,” who was the opposite of his brother Quetzalcoatl, the god of light. Tezcatlipoca was the patron of the night, which associated him with coldness and darkness.

Then Diana mentioned “God of Lies,” which is usually associated with the Norse god Loki. Then Dolos, the Greek god of trickery and guile. Then Mendacius, the Roman equivalent. And finally: The Duke of Deception.

Bingo! The Duke has been a Wonder Woman villain since 1942. He is one of the Amazon’s most persistent foes, with a modus operandi as a lying liar who lies, and who often uses intermediaries to implement his schemes. In addition to being an avatar for the power of duplicity, he’s also a raging misogynist, so he’s a perfect foe for his diametric opposite, the demigoddess of truth.

Also, a god turning a woman into a Cheetah avatar? See “Urzkartaga” above. Dechalafrea Ero is one heckuva mish-mash of a character.

Pedro Pascal’s bad guy seems to be based more than a little on a certain president. But the movie is set in the go-go ‘80s, so there may be a little bit of Gordon Gekko of “Wall Street” in there, or Jordan Belfort of “Wolf of Wall Street.” I wouldn’t be surprised if Bernie Madoff isn’t an inspiration as well.

Lord was introduced in 1987, as the driving force behind the new, post-Crisis on Infinite Earths Justice League. His characterization flopped all over the place, from Gekko-like scheming to carnival barker hucksterism to flat out comedy relief. At the end of the storyline, however, he was revealed to be under the mind control of a sentient computer program called Kilg%re.

Lord had some wacky adventures after being freed from Kilg%re, including the development of mind-control powers in the late ‘80s. He was possessed for a while by Dreamslayer, a supervillain from a parallel Earth, and Kilg%re again. Plus, he was briefly turned into a cyborg. Oh, he also seemed to die of a brain tumor, but he got better. None of these stories were front and center of the Justice League’s attention, but they happened, and I feel honor-bound to mention them.

Lord’s mid-2000s storyline is next, and it’s the big one. He shoots Blue Beetle in the head, takes over the anti-superhero espionage agency Checkmate and takes control of Batman’s satellite, Brother Eye, which uses a nanovirus to turn ordinary people into superhero-hunting cyborgs. Many people die.

Tl;dr, Lord took over Superman’s mind and forced the Man of Steel to fight Wonder Woman to the death. Wonder Woman, being awesome, realized in the midst of her fight with the Man of Steel that the real threat was Lord. Under the influence of the lasso of truth, Lord says he will continue to use Superman to kill people unless he’s stopped, and the only way to stop him is to kill him. So she breaks his neck. On global TV. Which was really bad PR. That was a whole thing for a while.

And it’s very similar to the climactic scene in “Wonder Woman 1984,” which features Lord, the lasso and global communications. I will say no more — some of you may not have seen it yet — but the thematic overlap is obvious.

P.S.: DC has instituted two linewide reboots since the above story, so Max is back, complete with mind-control powers, his death (and most of his history) erased. Just so you know. 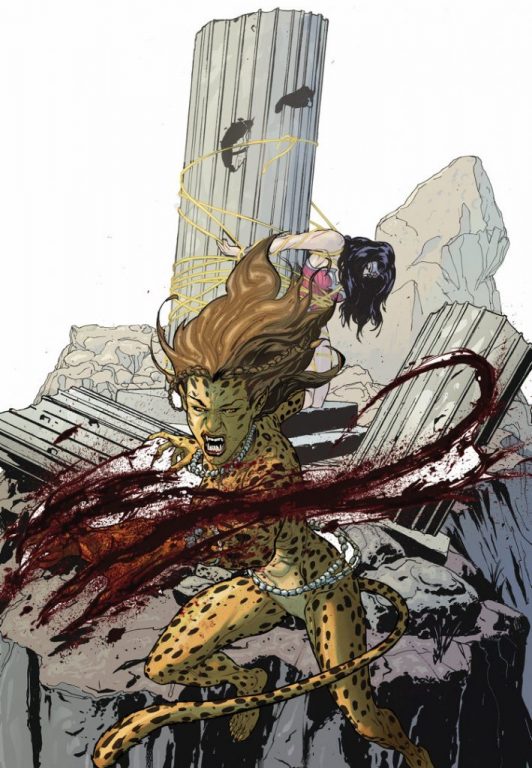 VICTOR IBANEZ / DC COMICS / TNS
The Cheetah has been a major villain in the Wonder Woman mythos since 1943, but it wasn’t until the 1980s that she transformed into a cheetah-like monster.

Methinks the man identified only as “POTUS” in the credits, played by Stuart Milligan, is meant to suggest, if not actually be, the man who was president in 1984: Ronald Reagan.

Surprise! The corporate titan Max Lord humiliates and has arrested is a pre-existing character in DC Comics. Fans of “Wonder Woman” comics can be forgiven for not recognizing the name, though, because the CEO of Stagg Enterprises doesn’t have much of a Wonder Woman connection.

Stagg usually shows up in stories featuring Metamorpho, because it is Stagg who engineered the “accident” that turned soldier of fortune Rex Mason into the Element Man. (Stagg was actually trying to kill Mason for dating his daughter Sapphire, but the ancient Egyptian Orb of Ra had other ideas.) Stagg is usually accompanied by Sapphire and aide-de-camp Java (a super-strong Neanderthal that Stagg found preserved in a tar pit and somehow restored to life, who is also in love with Sapphire).