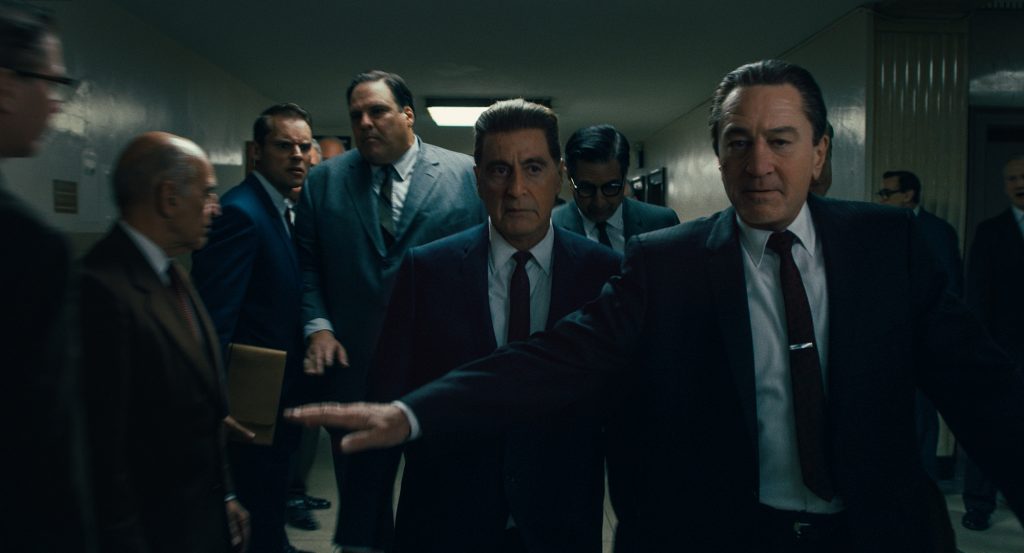 If you had pure intentions of watching Martin Scorsese’s 3 1/2-hour mob epic “The Irishman” in one sitting and for whatever reason — a failure of focus, too many interruptions, general exhaustion — couldn’t make it through to the end, Al Pacino wants you to know that he feels your pain.

When Pacino arrived at Scorsese’s New York office a few months ago to watch “The Irishman” for the first time, the 79-year-old actor could last only through the film’s first half before asking for a break.

“I didn’t know what I was in for,” Pacino says. He’s seated on a sofa next to his friend and “Irishman” co-star Robert De Niro, and he’s trying to find a delicate way of explaining what happened that day. “You’re seeing yourself for the first time, so sometimes your bladder reacts to it.”

De Niro looks at Pacino, confused. “Your bladder?” Pacino lets out a bellow. “I don’t know. But I had to go! I couldn’t make it through the whole thing. So I went, and I came back and it made no difference to me. I was very moved by it. It reminded me of the feeling I get after having absorbed a novel. There’s a lot there to reflect on. And I don’t usually get that from a movie.”

With 10 Oscar nominations, including best picture and one for Pacino, “The Irishman” is a reunion, a farewell and a summation. It’s the fourth movie Pacino and De Niro, 76, have made together, though they shared no screen time in one of those films (“The Godfather Part II”) and had only one scene together in another (“Heat”). It’s the ninth movie De Niro has made with Scorsese and the first time Pacino has worked with the director.

“The Irishman” affords the two actors an abundance of fellowship, with De Niro, a producer on the film, playing Frank Sheeran, a mobster and Teamsters official who worked for charismatic Teamsters boss Jimmy Hoffa (played by Pacino), came to regard him like a brother and then, according to Sheeran anyway, murdered him, an act that can be seen both as a betrayal and an expression of love.

We sat down on an early winter day in a West Hollywood hotel, a couple of miles from where “The Irishman” was screening for Screen Actors Guild Awards voters. De Niro, polite but reticent, let Pacino do most of the talking. “You do an interview and you learn a lot of things — especially about Bob!” Pacino joked about his reserved co-star. Earlier Pacino copped to being a little hyper. “I’m sorry, Bob. I’m taking all the questions!” De Niro flashed a crinkly smile and raised his hands in surrender. “It’s OK, Al. You’re good at this.”

Scorsese says you come at acting from different places. “Al tends to go more toward fluidity and music, while Bob likes to locate state of mind and being, settling in.” Do you agree with that?

Pacino: “Fluidity and music” is interesting. I love music. I can’t really sing. I can’t play an instrument. But I’d say that music is my first love. I’ve used it at various times in roles, particularly when I was younger. I remember making “The Godfather” movies, especially “Godfather II” …

Pacino: That’s very good, Bob. (Laughs) It’s close. I went to Mozart. I listened to a lot of Mozart and also Stravinsky and it put me in the mindset of Michael Corleone. I tried different pieces to see where they’d put me. You ever try it?

De Niro: I listen to some music to help get me in an emotional state. Sometimes it works. You can’t rely on it. If you’re going to cry, even a silly thing can help. I’ve listened to things from commercials. There was this one sentimental commercial, years ago, and I’d play it and it would help me.

What are we talking about here? Like the Paul Anka Kodak commercial?

De Niro: (Chuckles) No, no. (Pauses) Though … I might have to try that. I think mine was a public service thing. But music … doing a scene, like with Al, I feel there’s a musical connection. Ad-libbing, improvising, it’s like two musicians playing.

Did you do any of that in your scene in “Heat”? (Director) Michael Mann said you do free-form psychological absorption, Al …

… while Bob is determined to be completely in the moment.

De Niro: That’s interesting that he said that. It’s similar to what Marty said.

Tell me about free-form psychological absorption.

Pacino: I did a lot of theater early in my life, and that’s all about rehearsing. The more I rehearsed, the more I played a role, the more things would happen. That’s the psychological absorption, my friend. I love repeats! But you don’t often get that in film. There’s not much rehearsal.

With that scene in “Heat” with Bob, I went off to think about it and learn it. Then you can be in the moment and you listen and look and see what Bob’s doing and it changes. If he does something strange, I have to be there.

De Niro: We didn’t rehearse that scene in “Heat.” I didn’t want to.

Pacino: And that was wise. Because these two guys have never spoken to each other. And when we finally meet for the first time, there’s an energy in that wariness.

De Niro: It’s one of the favorite scenes I’ve ever done.

Do you have a favorite scene you did together in “The Irishman”?

De Niro: I don’t know if I could single one out. Just the fact that we did another film together means a lot.

Pacino: There’s no guarantee that a movie like this happens. You look at (Paul) Newman and (Robert) Redford. They stayed friends. They wanted to work together again. But they didn’t. And people don’t understand why, but it’s just tough for things to line up. I’m thankful they did for us.

De Niro: Al wrote me a beautiful email that meant a lot to me.

Pacino: I did. Immediately after seeing the movie. I called Marty and I wrote Bob.

What did you tell him?

Pacino: Ha! (Long pause) You know … I was moved by it and what he did. And I wanted to tell him that.

De Niro: I didn’t expect that. I was very, very moved by what you wrote.

You’ve known each other since the ’60s. How did you connect as friends, beyond the work?

Pacino: Early in the ’70s, without consciously doing it, we bonded because we were both dealing with the fact that, all of a sudden, we were well-known. You go from being a young, out-of-work actor to having people recognize you everywhere you go. That’s a peculiar experience, and there was comfort in talking to someone else going through it. Because it was very strange what was going on.

Pacino: Well, I remember a friend of mine once said to Lee Strasberg in an elevator, “Oh, I know you.” And Lee says, “No. You know who I am. But you don’t know me.” Same friend was with me one time at a grocery store and I’m inside getting a cup of coffee to go. And a woman came up to my friend and asked, “Is that really Al Pacino in there?” And he said, “Yeah. Somebody’s gotta be.” That’s fame.

De Niro: It’s disconcerting. You can’t prepare for it.

Pacino: We’d call each other and compare notes. “You want to get together?” And we’d get together …

De Niro: … and it was always fruitful. There’s a trust.

Pacino: Something always came out of it. And here we are today.

Because you’re playing characters in “The Irishman” who pass through decades, thanks to the de-aging technology, there was a guy on set who’d yell out your character’s age when you were doing a scene …

Pacino: Thirty-nine! Because I was getting off the couch like a 70-year-old man! And, in the scene, Hoffa was supposed to be 39. You forget how you moved. Later on, there was a scene where Hoffa has to run up a flight of steps. That I could do … because I was already standing!

De Niro: (Laughs) When I saw him running up those steps, I thought, “Jesus, he really went up those steps!” You couldn’t keep up with him.

When you think of your age, how old do you feel?

Pacino: My friend said it’s sort of rude asking how old I am. It’s almost like asking someone who’s older, “How much longer do you think you have left?” (De Niro laughs)

I know how old you are. I’m wondering what age you feel.

De Niro: Most of the time, I feel younger than 76. But then sometimes, you look at yourself in the mirror and you say, “Oh, geez.” I remember I was standing outside a building one time and I said, “Who’s that old guy over there?” He had a hat on. Then he turned around and it was somebody well-known and we said hello. But it was weird. And that’s how I probably look to people.

Pacino: The worst thing is when you’re walking somewhere and, by accident, you see yourself in the mirror and you turn around and say, “Whoa! Who’s that?” And it’s you! Who am I? It brings you down a little bit.

But there’s all that hard-earned wisdom that comes with all that experience, right?

Pacino: (Laughs) You don’t always want that hard-earned wisdom. It’s like that line Hoffa has in the movie. “Charge with a gun. With a knife you run.” If Hoffa said it, it’s probably true. He got 13 stitches in the back of his head. So if I had to take anybody’s advice on that, it’d be Hoffa’s. But do you want that hard-earned wisdom in your life? You just have to live with the decisions you’ve made and be grateful.