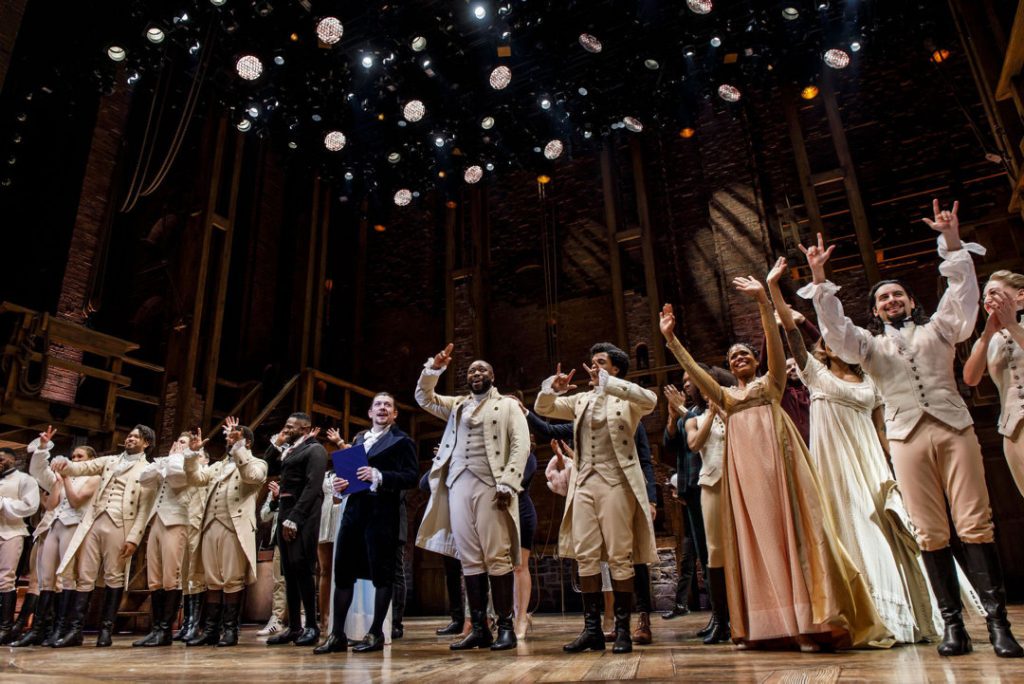 On July 3, the Disney Plus streaming service will release a filmed version of Lin-Manuel Miranda’s “Hamilton,” timed for the Independence Day holiday weekend. Here’s what you need to know.

What is this “Hamilton” I keep hearing about and why should I care?

It’s the most successful Broadway musical of the modern era, a blockbuster phenomenon penned by Lin-Manuel Miranda that tells the story of the founding fathers of the United States of America by focusing on Alexander Hamilton, the first secretary of the treasury and an influential economic thinker and a leading promoter of the Constitution of the United Sates. The score is hip-hop influenced but varied in style. When seen live, the rapturously reviewed show commanded unprecedented ticket prices in both New York and Chicago, where it closed earlier this year.

So is this the stage show or a new movie?

This is the stage show, shrewdly filmed on Broadway at the Richard Rodgers Theatre in 2016, mostly for documentary purposes and then hidden away for potential future use. It is directed by Thomas Kail, the director of the show (no one else has yet directed any other production of “Hamilton”). There are also plans for a movie but that is likely years away and it will be a very different animal when it arrives. Kail, a skilled director of both stage and screen, was able to edit the work of multiple cameras but the performers are doing exactly what they did every night on stage.

Does it star Lin-Manuel Miranda?

It does. In all his 2016 glory. In fact, this filming stars the entire original cast, all of whom now are long gone from the Broadway production. Many of the actors who came later were superb–such as Miguel Cervantes and Joshua Henry–but the original crew helped devise the show and they widely are seen as the definitive interpreters. Note that the segment of the show that was filmed as part of “Hamilton the Exhibition” in Chicago used a different cast, Miranda excepted. And the Disney version is a traditional staging, not the “immersive” concept used at the now-shuttered exhibition.

Will I get the same experience?

If you mean, “Will it be like sitting in a theater for the most popular musical of its era?,” then probably not. That will depend on what you can do at home. According to Miranda, this version includes the pre-show announcement and the bows and post-show applause. It does not include errant cellphones. Or the thrill of live, person-to-person interaction.

Is there an intermission?

Yes. You get a one-minute bathroom break between Act One and Act Two. But fear not the angry usher. You can hit pause.

What about my kids? Is it suitable?

Absolutely. It is American history, after all. The official rating is PG-13 and Miranda has said that he gave up two uses of the F-word to avoid the R rating. Apparently, the one remaining use of the dreaded four-letter word past muster. One expletive is muted; the other is “record-scratched.” Miranda has pointed out that you can sing what you like at home, or even sync up your original cast album.

I don’t have Disney Plus. How do I get it?

Go to Disneyplus.com and pay your $6.99 per month (free trials have ended, not coincidentally). You can cancel any time you want.

I want to be the first to see it among my friends.

You might have to sacrifice a night’s sleep. The show drops at 3 a.m. Eastern on July 3.

Will I own “Hamilton” then?

Well, no. You wish. That said, you will be able to watch it as many times as you want after July 3, assuming you maintain your subscription. It will live alongside other streaming content for the near future. Precisely how long it will be right there on Disney Plus has not yet been announced, but you might see it disappear once the live show is back on Broadway.

Will this undermine the live show?

Great question. Remains to be seen. Perhaps it will further stoke demand to be there in person, or maybe the pandemic has blurred the previously perceived limitations of streaming and most people will be satisfied by what they see in their living room. For a whole variety of reasons, though, it seems likely that “Hamilton,” when it returns live, will be available at a more affordable price.