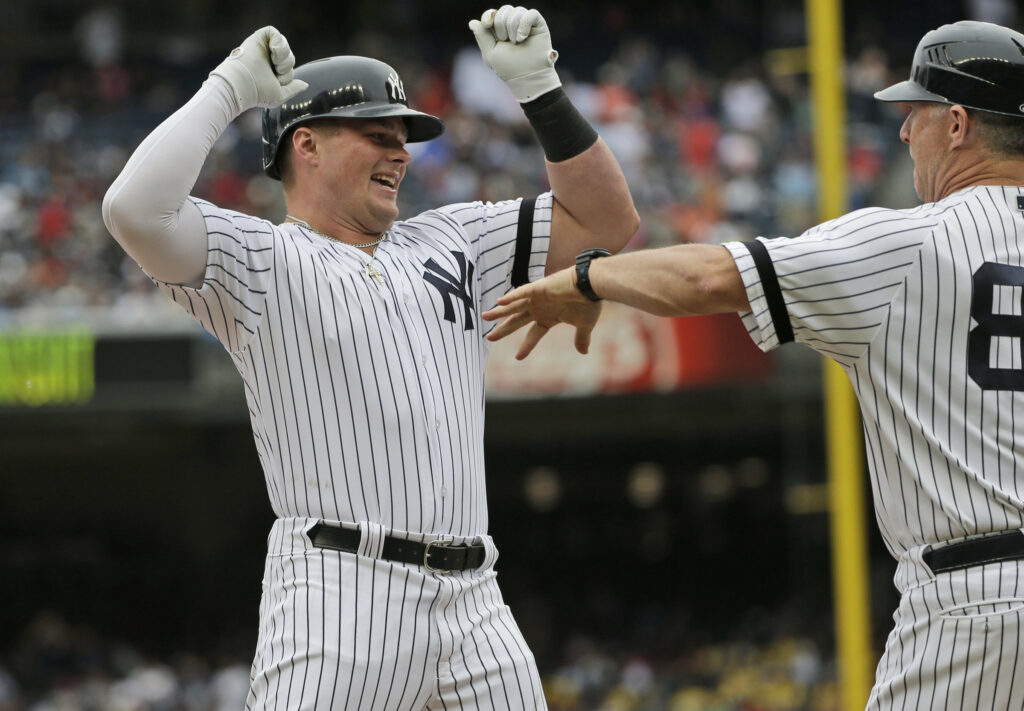 Luke Voit said he doesn’t feel the pain anymore. Now, it’s just about getting back into baseball shape.

The Yankees first baseman worked out with the RailRiders on Tuesday and will begin a rehab assignment Friday when the team travels to Lehigh Valley. He will stay with the RailRiders through the upcoming roadtrip, which continues on to Pawtucket after the weekend stop in Allentown.

“I can take my time,” Voit said of the rehab plan. “That’s the good thing about where we’re at in the division is we’ve got a big lead. I’m more worried about my at-bats getting ready for October. It would kill me if I couldn’t play in October.

“Obviously just getting back and getting my time back is the biggest thing. It’s nice that I get these 10 days to kind of take it easy and get what I need to get done so I feel 100 percent and back to normal and I don’t feel rushed or anything. It’ll be good. I think I’ll get probably 25 at-bats, probably, so that should be enough hopefully. But like I said, I just need to see the pitches, see it out of his hand again. Hit some sliders, hit some fastballs.”

Voit, who is rehabbing a sports hernia, fielded ground balls and took batting practice on the field Tuesday for the first time.
He went through a round of defensive drills with RailRiders manager Jay Bell, taking grounders from his knees on the infield grass before moving on to ground balls at first base. He finished with6 Bell hitting grounders across the diamond back to Voit, who scooped them out of the dirt at first like they were low throws from infielders.

When he initially got hurt, Voit said he most often felt the injury when he was running or making his first step on defense. Once he started thinking about it too much, he said it started to affect his hitting. That’s when he decided he needed to do something to get better. He first landed on the injured list June 30 with what was called an abdominal strain, but came back quickly and was activated July 13. Voit went 15 for 56 (.268) with four extra-base hits over 16 games, but also struck out 24 times. On July 31, the Yankees put him back on the injured list.

“Honestly feels way better than it did when I first came back,” Voit said. “It’ll be definitely tolerating it. I think it’s something I had before and then obviously I got hurt in London. I think that it just got irritated because of it so I never knew it. And then I tried to play through it and everything else, kind of got worse. So, it’s just, like you said, maintaining it, make sure I’m keeping up with my exercises before I do my baseball activities and stuff. But besides that, everything — working out, hitting and defense — I finally feel like I’ve got my whole body working instead of just my upper half.”

Voit jumped in with the RailRiders’ final BP group, and though he hit more foul balls than likely is normal for him, he also hit several home runs.

“So far, everything’s been feeling good,” Voit said. “I’m just excited to see some velo and some offspeed pitches this weekend and then into next week.”

BP time for Luke Voit. Note: this is his first round and it looks like he’s letting it rip right away. pic.twitter.com/2S23DI26FV