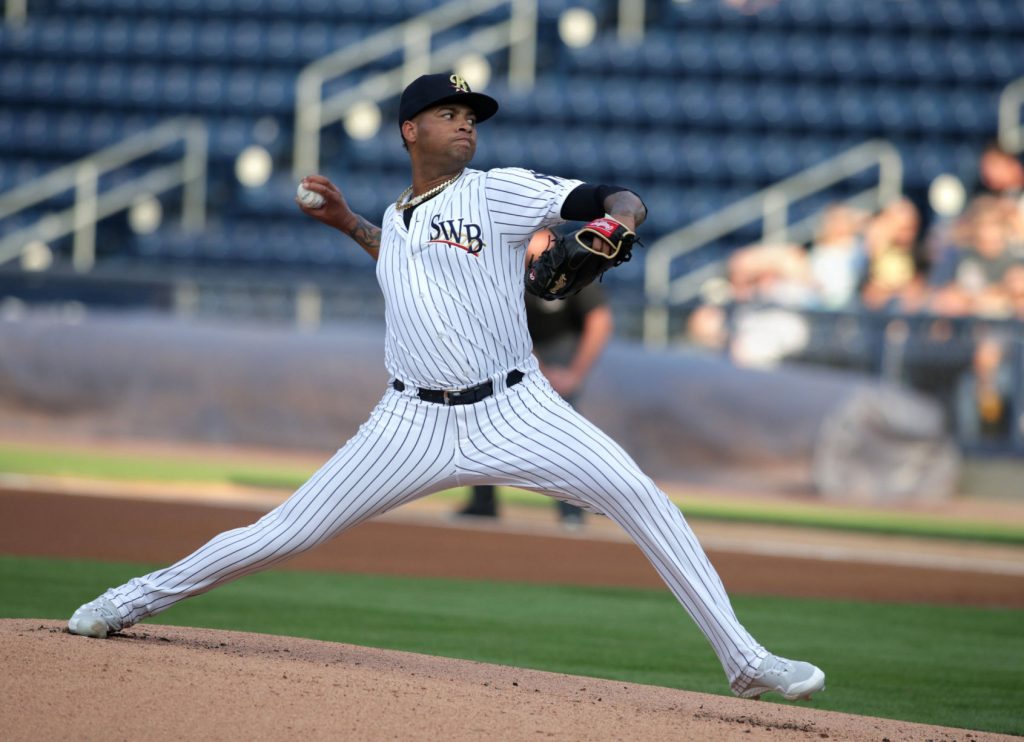 If needed, the RailRiders had 574 pitches at their disposal for Wednesday’s game against Syracuse. They just had two days off and headed into the first game of the Final Stretch with 17 pitchers — plus one rehabbing MLB arm — on their roster.

Likely (hopefully) they won’t come near that number in a game that started with Yankees rehabber Jameson Taillon squaring off against Mets rehabber Noah Syndergaard.

Here are some pregame pitching notes:

Gil to the bullpen

Luis Gil warmed up with the rest of the pitchers Wednesday, but isn’t listed as being part of the RailRiders’ upcoming rotation. That’s because the team will start to transition him to the bullpen in case he’s needed in that role in New York.

“We’re probably going to look at the bullpen, trying to get him a few looks in the bullpen, just if that’s something that’s needed in the last week or into the postseason if that comes about, then we’ve got some experience doing it,” said Desi Druschel, the Yankees director of pitch management who is serving as the RailRiders pitching coach.

Gil made six starts with the Yankees this year and posted a 3.07 ERA. But New York’s rotation is getting healthier, so Gil could be needed elsewhere.

Gil’s first 16 games as a pro came in relief in 2015 when he was in the Minnesota Twins organization, but since then, he’s pitched in just one game where he wasn’t a starter. That came this season, Aug. 29 against Lehigh Valley, where he struck out five of the first six hitters he faced after entering in the third inning. Even that game, however, Gil was used as more of a bulk man than a true reliever (he pitched 4.2 innings and threw 78 pitches).

“I think it’s more about the preparation part,” Druschel said about what Gil’s biggest adjustment will be. “Obviously, he has both: the velocity and the workload built up. It’s more just him getting used to coming out here, doing some training (before the game), and then being hot for the game. I think the big thing we want to do is just have a little bit of certainty of when he’s going to go in.”

One pitcher the RailRiders didn’t have available Wednesday: Deivi García, who landed on the injured list because of a right wrist issue. It doesn’t sound like too serious of an injury for the 22-year-old, however.

“He’s got a little wrist issue that, quite honestly, I think he just slept on it wrong,” Druschel said. “And it’s been stiff. We got x-rays on it the other day. They’re fine. We may just get some more imaging on it, but I really don’t think it’s anything. It’s just it swelled up on him.”

Druschel said it wasn’t anything that happened during a game. It’s just something García woke up with one day.

Stephen Ridings won’t pitch again this year, with the RailRiders shutting him down because of an elbow injury that landed him on the injured list Aug. 23.

“Just wasn’t progressing well,” Druschel said. “Same thing as before, where we’re at the end of the season, I think that he’s OK, it’s just we don’t have enough time, so it’s like why push this?”

After he was injured, Ridings underwent testing, and all of the results came back fine. He had been trying to come back, but swung between some good days and some bad days during his rehab.

“And he gave it a pretty good go, and I think it was a legitimate go,” Druschel said. “We kind of said all along it was going to be day by day, and it just kind of got to the point where it wasn’t 100 mph. He knew that and it’s like, well, there’s no sense in really pushing through this. Again, we’re just up against it (the end of the season).”