Times Shamrock Penn State football beat writer Donnie Collins will make his picks for every game in the Big Ten this season, plus a few with local interest and his wife’s hometown team, Fresno State, starting this weekend. Plus, he’ll provide his Lock of The Week for a game outside the conference, as well.

Take them to the bank…(OK, maybe don’t do that. I don’t even do that.)

I thought Northwestern would be much better this season than it was in 2019, so it was not a surprise to see them handle the Terps in Week 1. But I wasn’t convinced they’d handle Maryland so easily. Minnesota had a rough start defensively against Michigan and wound up losing a shootout, but it’s clear to see the Gophers have offensive weapons, especially in QB Tanner Morgan, RB Mohamed Ibrahim and WR Rashod Bateman. Maryland allowed 537 yards of total offense — again, to Northwestern — and arguably was even worse on offense. Taulia Tagovailoa had perhaps the worst outing of any player in Power 5 football last weekend, throwing three interceptions and finishing with a 28.2 QBR and getting benched in favor of Lance LeGendre. Tagovailoas don’t get benched for backups. They bench starters. I’ve always said that.

(Author’s note: I’m including the game times and television networks above so you can make sure to carve out some time in your day to watch a titanic tilt like this one. It’s a public service, really.) 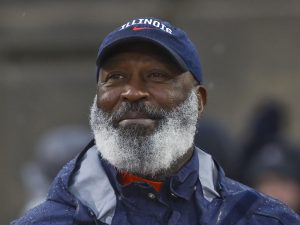 OK, so this is the week where we all annually overrate Purdue. And, I do get why we do this. We live in a fantasy football world, and the numbers matter, and we can identify with a quarterback that throws for 282 and three touchdowns like walk-on Aidan O’Connell did for the Boilermakers. And we all get super excited when a receiver like David Bell grabs 13 passes for 121 yards and three touchdowns because, oh my God, that’s, like 40-some points in fantasy league. This is a good offense, for sure. And the Boilers are coming off a big win against Iowa, and Illinois is coming off a lopsided loss to Wisconsin, and I know this seems like a sure bet Purdue’s way. I just see this as being closer than you think, though. I thought coming into the season Illinois had a chance to be OK, especially on offense. But it drew a Badgers team that had a lot to play for, while Purdue got an Iowa team that had a really difficult offseason. Gut feeling is, at home, Illinois responds and plays well. Purdue wins, but Illinois beats the 5.

Poor FOX. They pick this as their game of the week, thinking for sure that they’re going to get a key early-season battle in the Big Ten East, maybe a battle of unbeatens if the Wolverines get by Goldy in primetime. And here, you get Michigan pummeling Minnesota just hours after Sparty turns the ball over seven times and loses to Rutgers. To. Rutgers.

I really do believe that. But I also believe it’s not saying much. That’s a lot of points to give Michigan State in a rivalry game which it is playing to avoid complete embarrassment. I think Sparty plays hard, but you need to run the ball to beat Michigan, and Michigan State couldn’t move it an inch last week against Rutgers. I think Michigan wins, does so convincingly, and does so physically. Not sure that results in a cover, though.

As I said earlier, I thought Northwestern would be better this season. He took his lumps during his 15 seasons at Indiana, but Peyton Ramsey does some good things at quarterback. He gets rid of the ball quickly. He forgets mistakes. And he has seen everything the Big Ten can throw at you. (I believe he was a favorite of Fielding Yost for that reason.)

Meanwhile, Iowa is interesting. It lost to Purdue, and ordinarily, I’d think this was a program that had a really good shot to rebound immediately. But are these guys going to play hard for a coaching staff that had the issues it did during the offseason? I’m just not sure. Iowa is breaking in a new quarterback, Spencer Petras, and he didn’t get much of anything out of the Hawkeyes’ two best offensive players, receiver Ihmir Smith-Marsette and Brandon Smith, last week. Gut feeling on this game is that Iowa is entering a tailspin, and the Wildcats have just enough going on offense to exacerbate it. 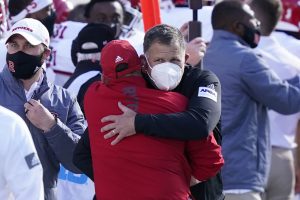 Oh, to know what’s going on behind that mask. But please leave it on, Greg. For all of us.

The only game between 1-0 teams in the Big Ten this week is being played between Indiana and Rutgers.

I think this is the most intriguing game in the conference this week (and yes, I know what I just said). I think Indiana is a very good team that put together one drive against Penn State last week and got very fortunate a replay review was interpreted the way it was (i.e., incorrectly). Rutgers, meanwhile, at the very least showed what good coaching can do. There aren’t many around the nation who thought the Scarlet Knights would compete at Michigan State, never mind win. They simply didn’t look like the same old Knights, though, and you have to give Greg Schiano credit for that. (Luckily for the Knights, Tennessee went out and found someone better two years ago.)

Just don’t know what to make of either team here. But my guess is Rutgers is slightly improved but not miraculously better, and that we’re all underrating Penn State quite a bit because of the result last week. Indiana plays close games at Rutgers (won by a TD in ’18 and by 5 points in ’16). Wouldn’t touch this game at the casino, but for entertainment purposes only…

Maybe this is the baseball side of me coming out, but if you look strictly at the stats from last week’s game against Indiana, it’s difficult to see how Penn State possibly lost. The Nittany Lions outgained the Hoosiers, 488 yards to 211. They held them to 1.6 yards per rush and less than 200 yards passing. Time of possession was 40:25 to 19:35 in Penn State’s favor. The Lions lost the turnover battle, and lost 100 yards in penalties. But, still, you wouldn’t necessarily think that all added up to a loss. But as quarterback Sean Clifford said this week, it wasn’t the turnovers; it was where they happened (two picks in Penn State territory, and a fumble inside the Indiana 5).It wasn’t the penalties; it was when they happened (two key calls give Indiana 20 yards on its game-tying drive in the fourth quarter).

Can you clean all that up and beat Ohio State? Sure. And, I think the Nittany Lions will be motivated and ready and play a lot cleaner than they did a week ago.

Can you clean all that up and still lose to Ohio State? Yep. That too.

This is such a good offensive team that the only way you can picture anyone in the conference beating them is to score 35-40 points. And, I just don’t see Penn State doing that. Maybe with Noah Cain. Definitely with Journey Brown. But Devyn Ford has to prove he can be explosive in the run game, and I don’t know if there’s a receiver who is going to be a consistent big play threat for Penn State. This game will be really close, for sure. But it’s going to make Penn State rue that Indiana loss even more.

OUTSIDE-THE-CONFERENCE LOCK OF THE WEEK

It’s a weird season, for sure. But Cincinnati is ranked No. 7 in the nation and has beaten two ranked teams in four games, including a convincing 42-13 thumping of then No. 16 SMU. This is a year where I just can’t bring myself to take the rankings all that seriously. We have teams that haven’t played ranked in the top 15. We’re just guessing right now, pretty much, and at least it’s out of necessity (not like the just-guessing preseason poll the media and coaches insist on throwing out there every August).

Memphis lost a tight game at SMU in September earlier this month, but that was after a long layoff for the Tigers. This is still a very, very good offensive team led by quarterback Brady White, who has a lot of weapons. Cincy is favored essentially by a touchdown, but I can see them needing to fight this one out late. Just have a gut feeling Memphis is better.

*This is for the Notre Dame fan who e-mailed Sunday to let me know Valley View and Scranton Prep could beat Indiana. Go Irish!