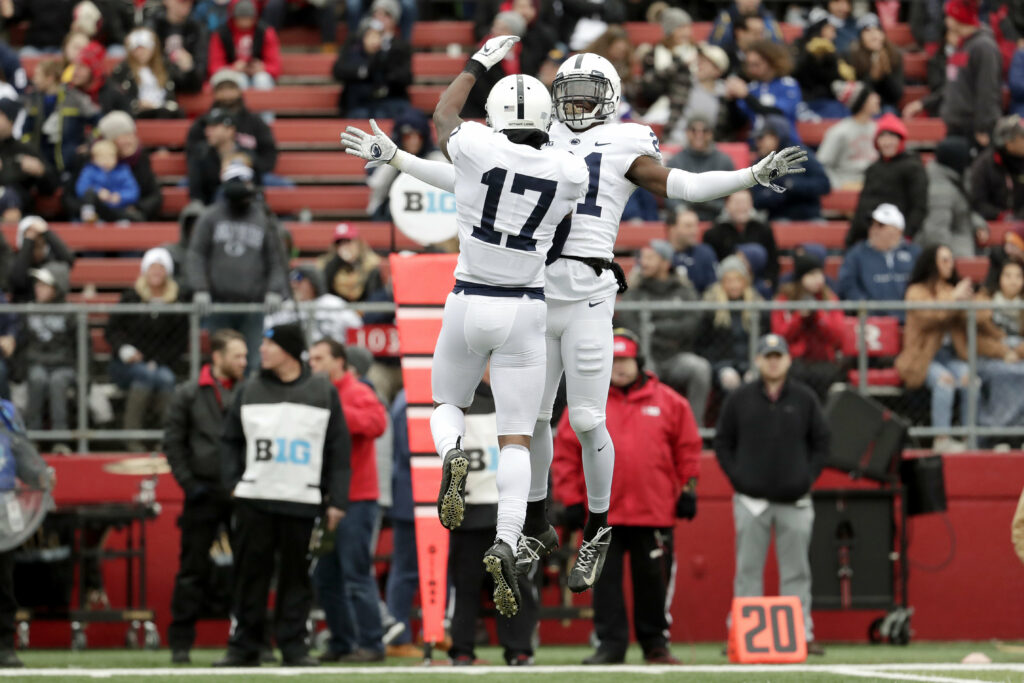 Garrett Taylor is coming off a strong junior season — it included the interception that led to this celebration against Rutgers — and returns as the unquestioned leader of the Nittany Lions’ safety corps. ASSOCIATED PRESS PHOTO

Today we continue with the safeties. 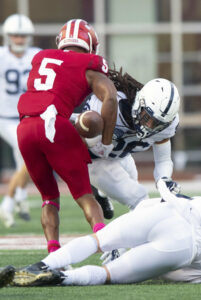 Senior Garrett Taylor might be the most underrated player on the Penn State roster. His first season as a starter in 2018 was steady, and he was one of the few Nittany Lions players who came close to the coaching staff’s 2019 mantra of creating turnovers and being aggressive in the pursuit of taking away the football. He had three interceptions, a forced fumble and a fumble recovery last season, making Taylor the only Penn State defender to have at least one of each.

With speedy Nick Scott graduated, the starting spot alongside Taylor will have to be filled, and that race can get interesting. Hard-hitting Jonathan Sutherland had a nice run as the top backup last season, but junior Lamont Wade has been one of the biggest stories in camp.

Defensive coordinator Brent Pry said the one-time top cornerback prospect in the nation as a high school star is perhaps as close to reaching his potential as he has been during his time at Penn State.

“I tell my guys all the time, I’m super excited when I watch them reach their hopes, dreams and aspirations,” safeties coach Tim Banks said. “That’s my job. Speaking of Lamont, I’m excited he’s trending in the right direction, and he should be. He’s in year three in the program, and he understands what our standards are, particularly in our room, as a unit. You can see the maturity he’s starting to bring.”

In so many ways, the race for the starting spot may come down to the two players who bring both the most diverse skill sets but also the least big-time college experience.

Jaquan Brisker and Tyler Rudolph are both in their first years in the programs, and Rudolph — a four-star prospect in the 2019 recruiting class — captured plenty of attention after a strong spring capped by a good performance in April’s Blue-White Game.

That said, Brisker has done the same since enrolling over the summer. The former Lackawanna College standout was a major difference-maker for the unbeaten Falcons last season, leading the team in tackles, sacks and pass breakups. The Nittany Lions could wind up using Brisker as a third-down weapon due to his versatility and big body. Pry said Brisker brings “cornerback skills” in a safety’s body.

Former Notre Dame running back C.J. Holmes transferred to Penn State last year as an offensive player, but he moved to defense in hopes of getting on the field a bit more regularly. At 6-foot, 215 pounds, he brings a bigger body to the position, and the coaches are excited about his potential.

Taylor is going to start, but expect the depth chart to be fluid here the rest of the season unless Brisker simply blows the competition away this month. The guess here is Brisker opens the season in a third-down role, allowing the coaching staff to take advantage of his versatility before he takes over a starting role by October. Sutherland and Wade will be competing against each other all season, but it’s hard to picture Sutherland, whose backup experience from last season will be difficult for the coaching staff to ignore, not getting his chance.