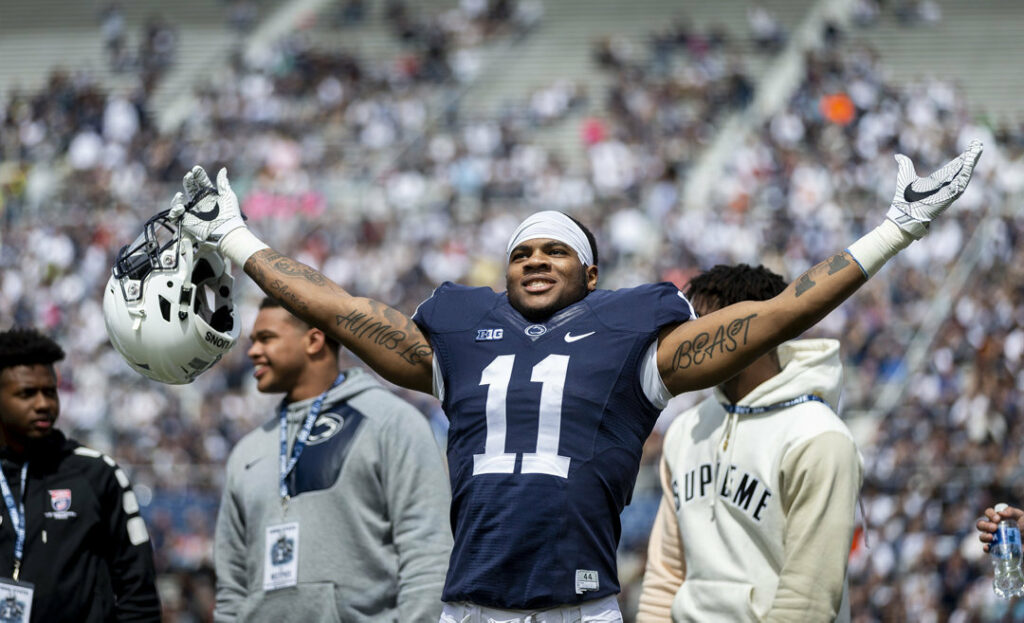 He has started just one career game, but the focal point of the 2019 defense is going to be linebacker Micah Parsons. And, he’s fine with that. JOE HERMITT / PENNLIVE.COM VIA AP

Today we continue with the outside linebackers. 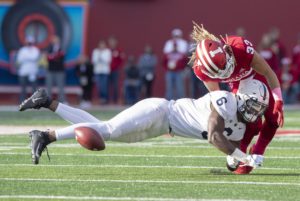 Well, it starts with Micah Parsons, the uber-talented, ultra-productive Will linebacker who led the Nittany Lions in tackles as a true freshman last season and played his best game in the Citrus Bowl, piling up a season-best 14 tackles with a forced fumble and a quarterback hurry. Crazy thing was, 2018 was his first season playing linebacker not just at the college level, but at any level.

“There are a lot of things,” defensive coordinator Brent Pry said, “that Micah can do.”

Parsons was among the top high school recruits in the nation — regardless of position — in the 2018 recruiting class, but Penn State is expecting huge things from him as he settles in at linebacker. It will help, too, that he has an experienced play alongside him to help guide him.

Freakishly athletic Cam Brown has quietly been one of the most impactful players on the defense over the last two seasons. He had 32 tackles last season, but he emerged as a solid player on passing downs as well, registering six pass breakups. He has also been a big hitter, forcing three fumbles. After the Citrus Bowl loss to Kentucky, it was Brown who stood in front of the defense and urged them to learn to be finishers, a mantra that has taken off with the Nittany Lions over the past several months. He’ll be a leader on the defense this season.

As is the case with plenty of positions on the Penn State roster in 2019, there is more talent than there is experience at the outside linebacker spot. Charlie Katshir was a highly regarded recruit, but he didn’t see the field as a true freshman last season, and all the walk-ons are freshman-eligible, so it makes some sense that the coaching staff might take someone competing for time at middle linebacker — most notably sophomore Jesse Luketa — and employ him for some depth on the outside as well.

They’re raving about Linebacker U being back in Happy Valley, and that’s only partly because of Parsons and Brown.

The coaching staff brought in a pair of five-star recruits at the position in the 2019 recruiting class, and both should see plenty of action on gameday this season.

Lance Dixon can run sideline to sideline, stick with receivers and make plays in every facet of the game, to the point where some scouting services ranked him as a safety. But he is productive and has drawn plenty of attention during camp.

Meanwhile, Brandon Smith is physically imposing, fast, strong and already looks like he has been in a college weight program for several seasons.

“He’s a man,” head coach James Franklin said of Smith. “He looks great, and he’s so angular. He’s got the broadest shoulders, with these two boulders on each shoulder. I’ve been very impressed with him. … His frame, I mean, he’s a guy that could be 255, 260 pounds and be playing linebacker, because he’s 240 right now and he still looks skinny because of how long he is.’’

This has a good chance to be the best duo of outside linebackers Penn State has had in quite a while from an athletic standpoint, and the depth is potentially strong. Luketa is versatile enough to play inside or out, and someday, Smith will be too. The future is bright here, and the linebackers are a big reasons why most say this could be the fastest defense Penn State has ever had.