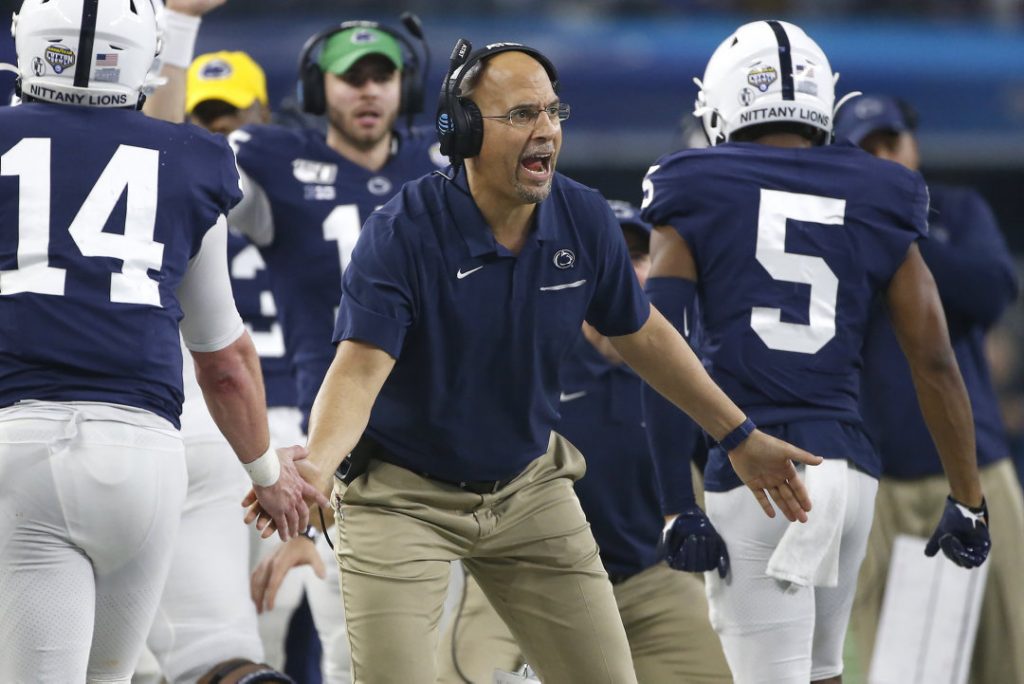 Penn State coach confident there will be a season, but it will be a challenge

Let’s look at the biggest question in college sports from two sides:

Will there be college football this fall? It’s starting to look like the answer is yes.

Even as COVID-19 remains a threat, states are opening up. The University of Tennessee was the latest major school, most in the South, to announce it plans to welcome students back to campus in the fall. Only a handful of schools in the Southeastern Conference have not announced similar plans to do so. Given that, it makes sense that if students are back on campus, campuses will get back to business. There’s no better business on a college campus than football, you should remember.

This is why James Franklin has been saying lately, with a certain degree of confidence, that he thinks Penn State will be back on the field at some point for a 2020 season, too. But he also fancies himself a man of science, a coach trying to keep both feet firm in reality. That’s why the Nittany Lions head coach prefaces his confidence with a bit of a disclaimer that maybe we should all be considering as we inch toward a return to some sort of our former normalcy.

“This is a lot more complicated than a lot of people are looking at,” Franklin insisted during a video conference with beat writers Wednesday afternoon.

Most of what Franklin said during this nearly hour-long discussion should be construed as good news for those who hope the fall will look more normal in the face of the pandemic than the spring has and summer promises to be. He’s “hopeful,” even confident, there will be a season.

That likely isn’t going to come with 107,000 screaming fans at Beaver Stadium of course, but he said that administrators have been studying models being released by NFL teams like the Miami Dolphins to host smaller crowds adhering to social distancing standards set forth by the Center for Disease Control. Franklin conceded Penn State could be looking at a full season or a shortened season, a season with semi-filled stadiums or one with no fans in the seats at all. The motivation behind that hope seems to be a very warranted desperation, knowing what lost football revenue will mean to college athletics on the whole.

“If we don’t make it work, there’s going to be major impacts across the board,” Franklin said. “Even if we get to the scenario as extreme as not having fans, I do think allowing people to watch Penn State football and having the ability to do that … you just have to be flexible and open to any of these scenarios. Because at the end of the day, we’ve got to find a way to make it work if we can, as long as everybody is going to be safe and healthy.

“We just have to have an open mind to whatever this is going to look like and trust the experts. … We’ve got to do whatever we can to save this season.”

Reality is, Penn State might have a lot more work to do to save its season than Clemson or Georgia or Alabama will, and the rub lies therein. The NCAA has worked over the years, setting rules in place, to make sure every program is given the same opportunities to meet, the same chances to be coached, the same amount of practice time, and the same rules on when they can reorganize on campus.

It’s just not going to be that way this year, and that probably puts Franklin’s program in a bind some others in the Big Ten might not be in. Nearly 52,000 people have been diagnosed with COVID-19 in Pennsylvania, and there are more than 3,100 deaths. It has hit Southeast Pennsylvania and our area especially hard, and there are plenty of Penn State players under stay-at-home orders who presumably will be returning to campus from some of the nation’s hardest-hit areas.

Without identifying him, Franklin said a fellow Big Ten head coach called him earlier in the week, floating an idea that the Big Ten should make a return to the field consistent, an all-can-come-back-or-none-can proposition. Franklin is the one who brought up the stark reality: That’s never going to fly, given the fact the COVID-19 climate is so different state-by-state and even county-by-county. There are more COVID-19 cases in Pennsylvania’s northeast region, which includes Lackawanna and Luzerne counties, than there are in Wisconsin and Minnesota, for instance.

“Let’s say you have six schools in your conference, or eight schools, that are all able to open and get going, and there’s one or two or whatever that can’t,” Franklin theorized. “Are you going to penalize all these schools not being able to open?

“With the Big Ten, say we have two or three schools that, at the end of the season, are part of the playoff conversation. Well, the schools we’re competing against (for playoff spots) in other conferences, were able to open before we were, and the Big Ten held back certain schools (from starting) for a school that maybe isn’t a hotspot for our conference? … I don’t think you’re going to like it, and I don’t think people are going to be happy about it. But in reality, I don’t see how you’re going to be able to hold up 10 or 12 in one conference from two states that are opening up a month later. I don’t think you can penalize one conference from opening because another conference is opening way ahead.”

Franklin urged the NCAA to release guidelines to discourage conferences from opening up earlier than they should. But there are no such guidelines now. We live in a world where Tennessee can conceivably start practicing on time, while Penn State has to wait.

That’s fine enough, considering the circumstances. But while there is hope playing fields will be full by the fall, there’s still a long way to go before we figure out how level they can possibly be.